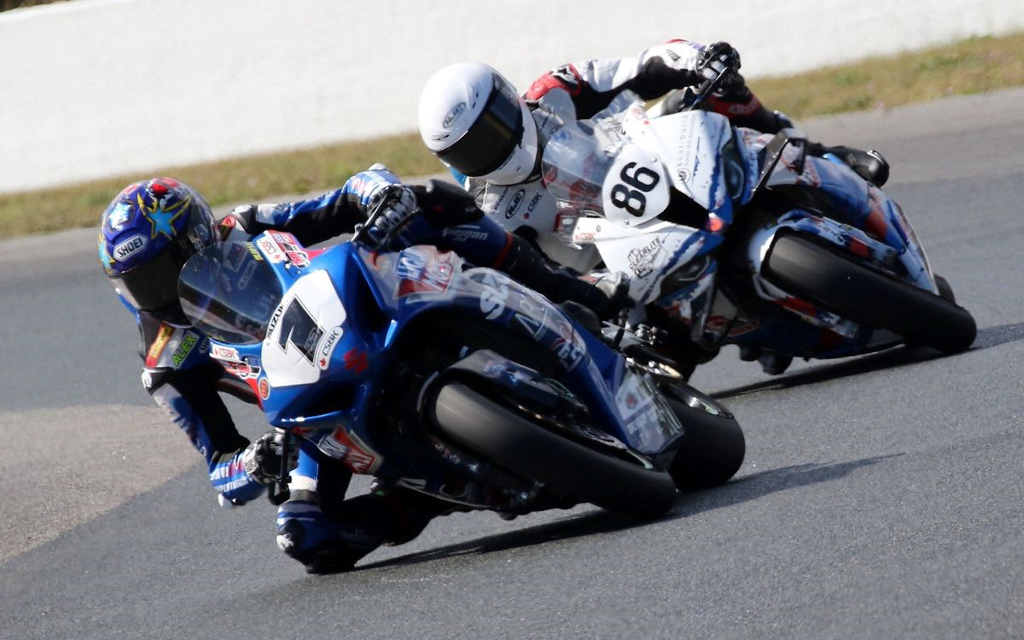 The final race of the 2022 Canadian Superbike Championship campaign came to an unfortunate end on Sunday, as Alex Dumas won a red-flagged Superbike race at Canadian Tire Motorsport Park.

The last leg of the weekend tripleheader lasted just less than four laps, after a pair of incidents involving multiple riders brought the day to a halt shortly before the regular curfew of 5 pm ET.

As a result, Dumas will end his second full season in Canada with an eighth career victory under his belt for the Liqui Moly/FAST School Suzuki team, though it wasn’t enough to help lift Suzuki to a second consecutive Constructors Championship as Ben Young finished second to secure the title for BMW.

Young already added a national championship of his own earlier in the day, finishing second to Dumas in race two to wrap up his second career Canada Cup, and the Van Dolder’s Home Team BMW rider added more hardware to his trophy case by helping BMW to the top spot and also taking home the Team of the Year Award.

Dumas did manage to steal one minor reward from Young, though, taking the surprise “King of Mosport” mantle and the literal crown to go with it, as he outpaced Young around CTMP with a pair of victories to end the year.

“It was a really fun year! We had a lot of great battles with Ben, unfortunately it didn’t work out for us in the championship, but we added a couple more wins away from Calabogie and learned the track a bit better for next year,” Dumas said. “I hope all the guys that went down are okay, but for now the focus for us is putting that #1 back on the bike next year.”

Young, meanwhile, will end his year with an incredible 16 race podium streak intact, after another perfect season on the box en route to a dramatic second title – and the first in his budding rivalry with Dumas.

“It’s not the end to the race or the year that any of us wanted, but thank god we didn’t let it decide our championship,” Young said after clinching earlier in the day. “It’s also cool to have three different manufacturers up here, and do so with a second national championship and a first for BMW.”

The third manufacturer Young would be referring to was the Turcotte Performance Kawasaki of Sebastien Tremblay, who picked up his second podium of the weekend and third of the campaign after the abbreviated race.

“It’s always nice to end up in third and up here on the box, even though it’s not how we wanted to get here,” Tremblay said. “We wanted that fourth podium of the year earlier but ran into some problems, but a huge thanks to Turcotte Performance for all the support in getting us back at the front.”

Fourth again went to Tomas Casas, who in the process earned himself a FAST School Hard Charger Award and a $500 prize to go with it after a very strong weekend and season debut aboard his Parts Canada Yamaha.

Trevor Daley rounded out the top-five for the OneSpeed Suzuki team, doing just enough to secure his third overall spot in the standings for the year, though it wasn’t enough to overturn the lengthy deficit Suzuki faced in the Constructors table.

Trevor Dion wrapped up the Liqui Moly Pro Sport Bike championship earlier in the day, surviving a late push from title rival David MacKay in what was a thrilling end to the middleweight season.

The full recap can be found here:
https://www.csbk.ca/index.php/news/news/3603-young-clinches-second-superbike-title-as-dumas-wins-race-two-in-ctmp

Fraser may have been in for a tough day regardless, as LaFortune was virtually unchallenged en route to a dominant victory, claiming the national title after trailing by eleven points entering the final weekend.

It was an equally frustrating day for Fraser in the Amateur Sport Bike ranks, as he came up just shy of eventual champion Paul Etienne Courtois on track, with Alexandre Michel stealing the win from both.

Courtois will claim an impressive national title after nearly capturing the Lightweight crown a year ago, while Michel leapfrogs Fraser for second in the final standings, with all three set to renew their rivalry in the Pro ranks next season.

With Cooney well out front, it was a battle between DeBoer and Vincent Wilson for the junior crown, with DeBoer holding a 15-point advantage heading in. That gap was blown wide open, however, when Wilson crashed out three laps in to effectively hand the championship to DeBoer.

It wasn’t the only title of the day for DeBoer either, as the youngster added a second championship in the Lightweight Pro/Am, conquering the Amateur division in the inaugural season of the Pro/Am series.

The full results from the season finale can now be found on the series’ official website.