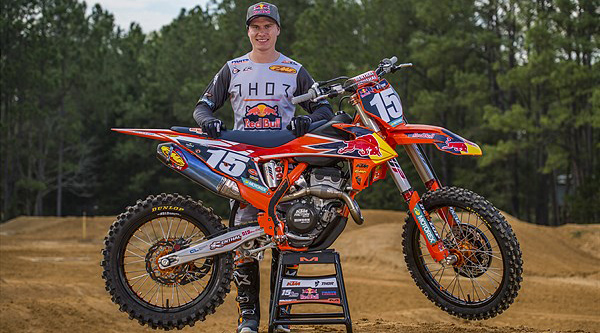 The KTM Red Bull THOR Factory Racing Team is proud to announce that two-time Canadian 250 Pro ClassChampion Jess Pettis is set to compete in the 2021 AMA 250SX East Championship aboard the KTM 250 SX-F, beginning with the opening round on Saturday, January 16th in Houston, Texas.

Pettis most recently wrapped up Canada’s MX Tour 250 Pro Championship with a dominant performance before missing the SX portion of the Triple Crown Series to undergo knee surgery in September. With a positive recovery taking place, Pettis heads into the winter with a solid training program under the guidance of world-renowned trainer Aldon Baker and his team at The Baker’s Factory in Florida. The talented up-and-comer earned his first top-five finish in 2019 at the San Diego SX and he looks to take that experience to the east coast as he contests the full series in 2021. His official race number is to be announced.

Jean-Sebastien Roy, KTM Red Bull Thor Factory Team Manager: “We’re very excited about Jess lining up for the 250SX East AMA Supercross Championship and having Ian Harrison and Roger De Coster from KTM USA behind us 100%. Jess has proven that he has the skills to do very well in Supercross. It’s been a while since we have seen a Canadian performing on the U.S. scene, so it’s very exciting for us at KTM and for Canadian fans and motorcycle enthusiasts overall, regardless of the brand or company. Jess will have a lot of eyes on him from Canada and we’re super pumped that he’s going all-in with this program.”

Jess Pettis, KTM Red Bull Thor Factory 250 Rider:“I’m extremely excited to be down here in Florida working at The Baker’s Factory and getting ready for the 2021 season. I believe this is going to be a big step in my career and working with Aldon, Seth Rarick and Mike Brown is big in getting me to the next level. They obviously have a proven program and I’m very excited to be a part of it and be training and riding alongside some of the fastest guys in the world. Now it’s time to get to work, have some fun and hopefully we can put Canada on the map during the Supercross season.”

The 2020 AMA Supercross Championship is set to kick off on Saturday, January 16 inside Houston’s NRG Stadium. For more information on the full series schedule, visit www.supercrosslive.com/tickets.