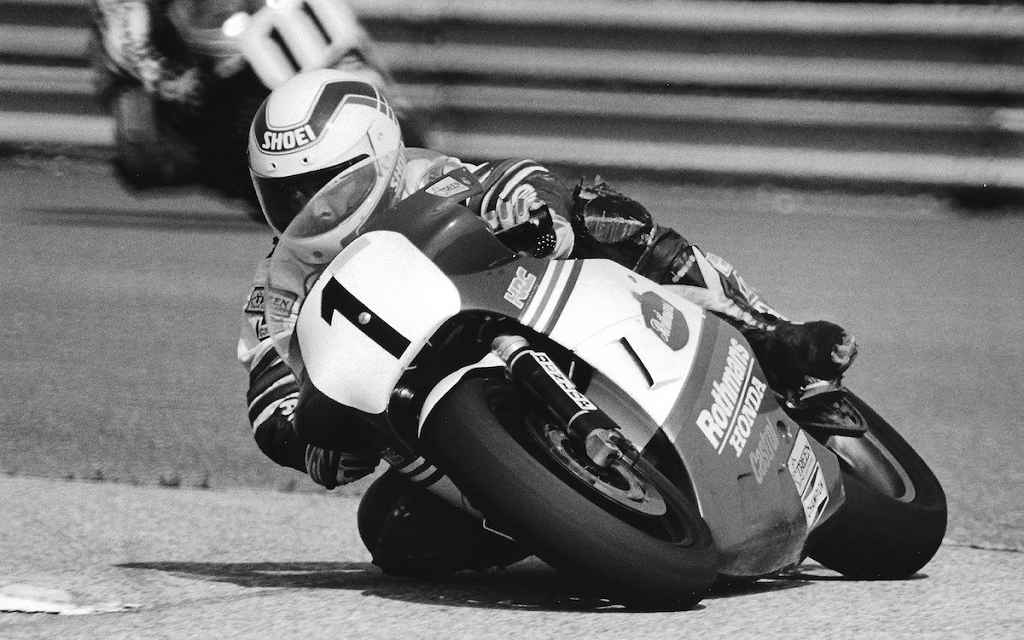 Art Robbins, age 59, died on Thursday afternoon in a hospital in Scarborough, Ontario, just outside Toronto.  He had been in intensive care for three weeks, with little chance for a recovery.

Robbins was a major star of the ever-growing road racing scene in the 1980s, with a huge fan following that made a big impression in eastern Canada and the north east of the U.S.A.  He won the RACE Eastern Canada crown twice, in 1983 and 1985, and was a works-supported Suzuki and Honda racer at home in Canada.

Robbins was a major success, but more than that, he was flamboyant and ultra aggressive, a racer who showed the way to a new style of riding, different from anything seen before.  Fans took an instant liking to the all-out Robbins road race approach., as well his friendly, hard partying lifestyle.

Robbins made occasional appearances in the U.S., but various distractions and legal issues spoiled most trips south, although he was a star during the ultra-hot Loudon AMA National weekend in June 1983.

Before he ever arrived at a road course, Robbins was a legend in the West Hill suburb in eastern downtown Toronto, charging around the neighbourhood on a variety of large-displacement street bikes.

When he finally arrived at Shannonville Motorsport Park in July of 1981, he lived up to his considerable hype, right out of the mandatory Racing School.  Aboard a Suzuki GS1100 stock street bike, Robbins almost won the Amateur Superbike race, but then wrecked the Suzuki on the way home when it fell from his trailer.

Robbins then bought an almost-complete Suzuki GS1000 Superbike from 1979 top Amateur Randy Fateux, and took it to Mosport International, where he ran near the front on the unsorted machine.  At his next event at Sanair, Robbins won, and within a couple of weekends was running with the top Pros at the front of the Feature class.

In 1982 Robbins started his first full season as a Pro, riding for the big Leitner and Bush Engineering squad on a much-improved GS.  Robbins ran at the front, won, but wasn’t consistent enough to challenge for the title – the next year he earned the number one.

In the fall of 1983, Robbins was working through a selection of legal issues connected to his lifestyle and hobbies.  On day release from serving time helping at a cemetery, he arrived late at Mosport and then fired his Suzuki into the turn one guardrail, destroying the famous GS.

Art next campaigned a Yamaha TZ750 two-stroke, four-cylinder G.P. style pure racer, and many insiders didn’t think hie could convert to the “Tee Zee.”  It took a while, but Robbins was eventually just as dominant on what, by that time, was almost a vintage racer!

In 1986 Robbins was recruited by Rothmans tobacco and Honda Canada to run an ex-Alan Labrosse Honda RS500 two-stroke triple, victor in the final AMA F1 race of 1985 at Elkhart Lake. Legend has it Robbins purchased the machine with a grocery bag full of cash.  While he was fast on the newer two-stroke, the team struggled to maintain the pure racer and suffered a string of embarrassing DNFs.

The next season, Leitner and Bush made a deal to travel west and build works superbike VFRs for Robbins and 1984 Champ Paul MacMillan, the bikes basically HRC machines.  Robbins won the season opener in the rain at Sanair with a come-from-behind charge, but the squad again struggled with reliability.

The next year, the “A” Rothmans-Honda program went to Rueben McMurter and achieved the Championship, while Art moved on to a strong privateer Suzuki effort with Team Ciampini but showed little interest in racing.

Robbins was a successful racer who was widely viewed as the most impressive prospect in Canadian history. Sadly, he flamed out spectacularly more than thirty years ago.  But anyone who got a chance to watch “Art the dart” race during the 1980s is likely to have remained a fan to this day.