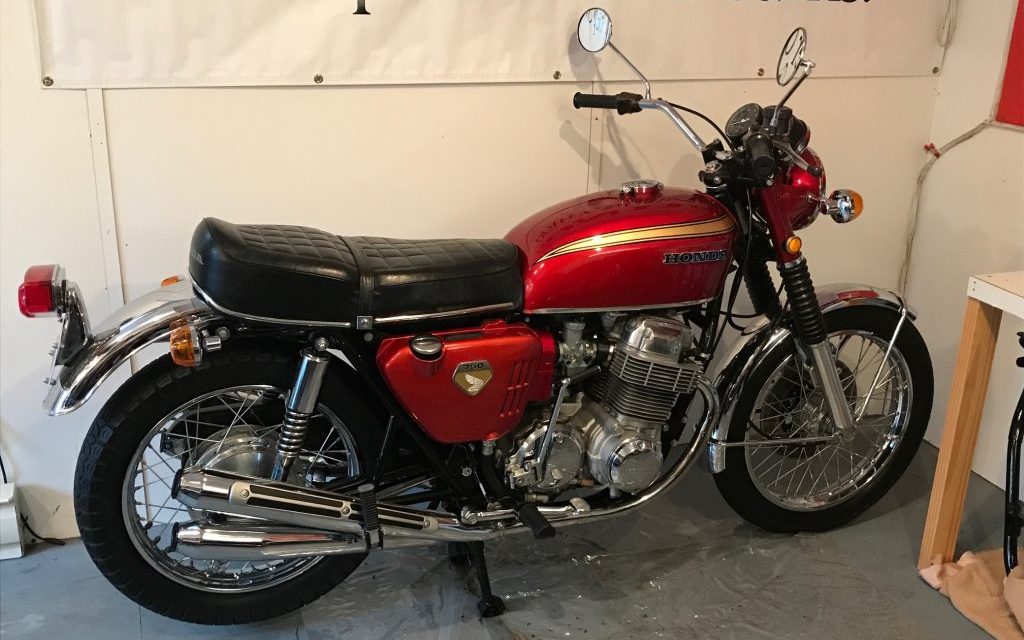 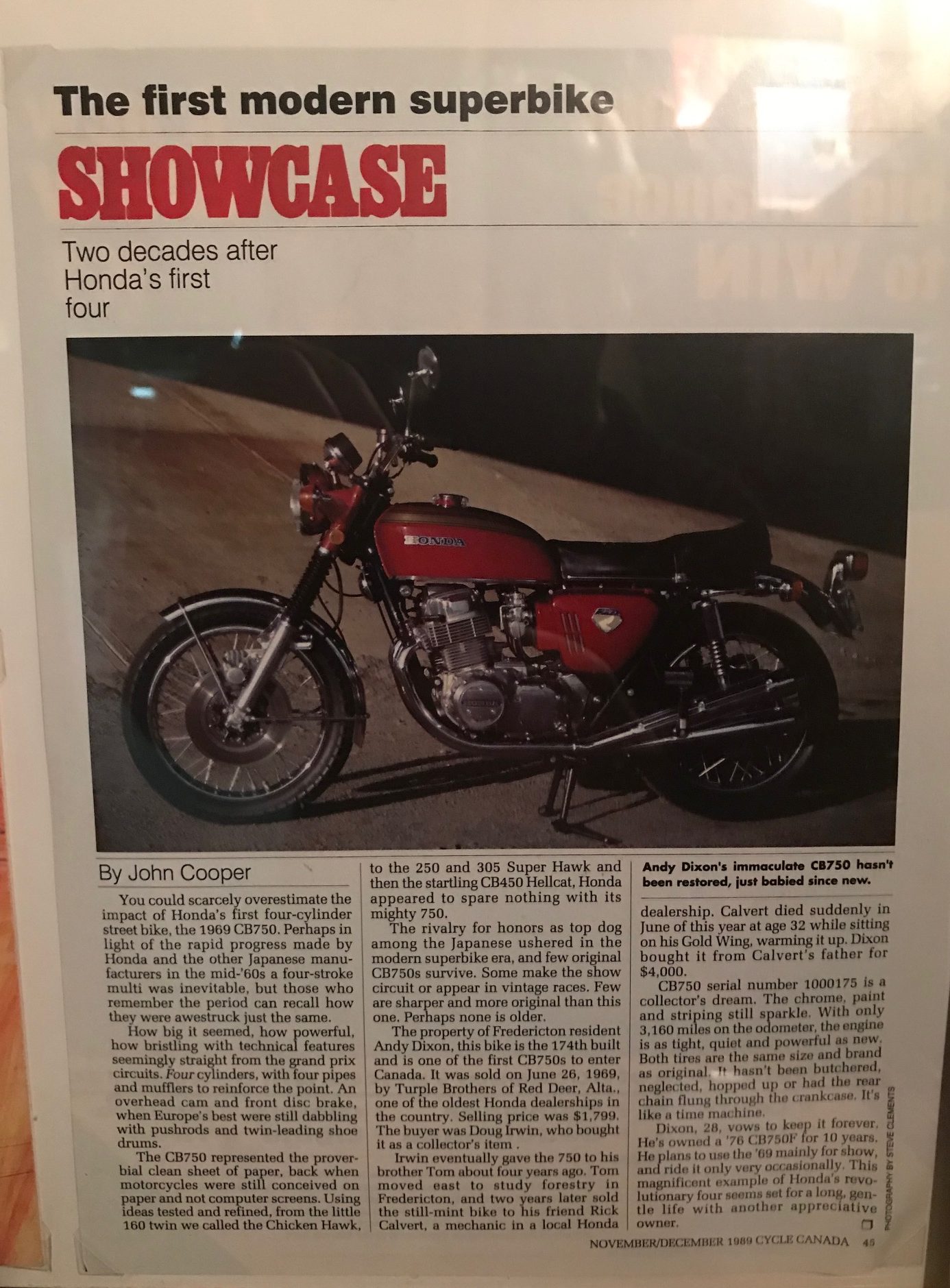 It was the Spring of 1989 when I saw a tiny ad in the classifieds of our local paper in Fredericton, New Brunswick.

I was 28 years old, recently married, and already a loyal Honda rider, having owned a 1976 moped, a 1973 CB350 twin, and a 1975 CB500T. My ride at that time was a custom-painted 1976 Honda CB750F that I’d purchased in 1979. I rode that bike from the east coast to Windsor, Ontario, the year I bought it, at the tender age of 17. Anyway, I went to look at the bike out of curiosity and discovered that I’d seen it before at the Honda shop where the owner worked in the parts department. I was shocked to hear that he had recently died of a brain aneurism while sitting on his Gold Wing warming it up after work. He was only 32.

The bike was drop-dead beautiful, the price was firm, and no test ride was allowed. You either accepted those conditions or you walked. I didn’t really understand the full significance of what this bike really was, but decided I had to have it. I borrowed the whole $4,000 (thanks to my wife Barb for understanding) and rode it home on my birthday, in July 1989. Shortly thereafter, I got in touch with Cycle Canada and they featured my bike in a “Showcase” article in the Nov/Dec 1989 issue.

I still own my “red ’69 sandcast” 30 years later and I’ve put less than 800 miles on it in all of that time. I’ve met a lot of serious collectors and restorers of sandcasts over the years, but I’ve always felt very lucky to have found mine because it is still special for the following reasons:

Unrestored, original, and in showroom condition, with original red paint.

Kill button with no stop, run, or pointer.

Currently has less than 3900 miles on the odometer.

Based on the serial number this bike was made in the first week of production.

Originally purchased by Doug Irwin, who gave the bike to his brother Tom around 1985 when he was coming east to study forestry. Rick bought it from Tom in 1987.

The red sandcast sparked an interest in collecting all things Honda, but unlike some collectors who go for volume, I only ever wanted a small collection of what I considered to be bikes that were significant in Honda’s history.

2017 Honda Gold Wing (because my wife Barb still loves to ride with me).

I also gave Barb a 1981 Yamaha SR185 Excitor many years ago and she still has it.

Being a collector of all things Honda, I also have acquired some other very interesting items over the years, including a huge original “You meet the nicest people on a Honda” dealer banner, lots of original manuals and brochures, early accessory items including leg shields and a leather trunk box for the ’59 Dream Sport, a Honda factory hat from a dealer conference in Japan in 1964, a first-generation Honda E-40 40 watt generator, and an E-300 300 watt generator, as well as lots of other Honda bits.

My buddy Al Landry was a budding restorer when I met him about 25 years ago, and after he caught the sandcast bug, he found and restored three of them back to showroom condition, so we have a total of five sandcasts in our little city on the east coast.

In 2017, Al and I teamed up with a couple of friends, Peter and Steve, and together we embarked upon the ride of a lifetime, “ROAL,” as we took vintage Hondas from ’71 to ’91 and rode around North America, storing the bikes along the route in San Francisco and completing the trip in 2018. We did it “old school” with lots of tools and parts, and despite an anticipated number of mechanical issues, we made the entire 16,000 km trip without paying a penny to a mechanic and performing regular maintenance in hotel parking lots or wherever.

As another “Honda nut” friend said to me many years ago, “I don’t know; if it doesn’t say Honda on the tank, it just doesn’t hold too much interest for me.” The original story about the red 69 sandcast in Cycle Canada back in 1989 said “Dixon, 28, vows to keep it forever.”

It’s 30 years later, and that statement still holds true. I consider myself very fortunate to have acted on that newspaper ad and borrowed the money to buy what my friends all considered an overpriced bike. It’s worth quite a bit more today . . . but I’ll never see the money. 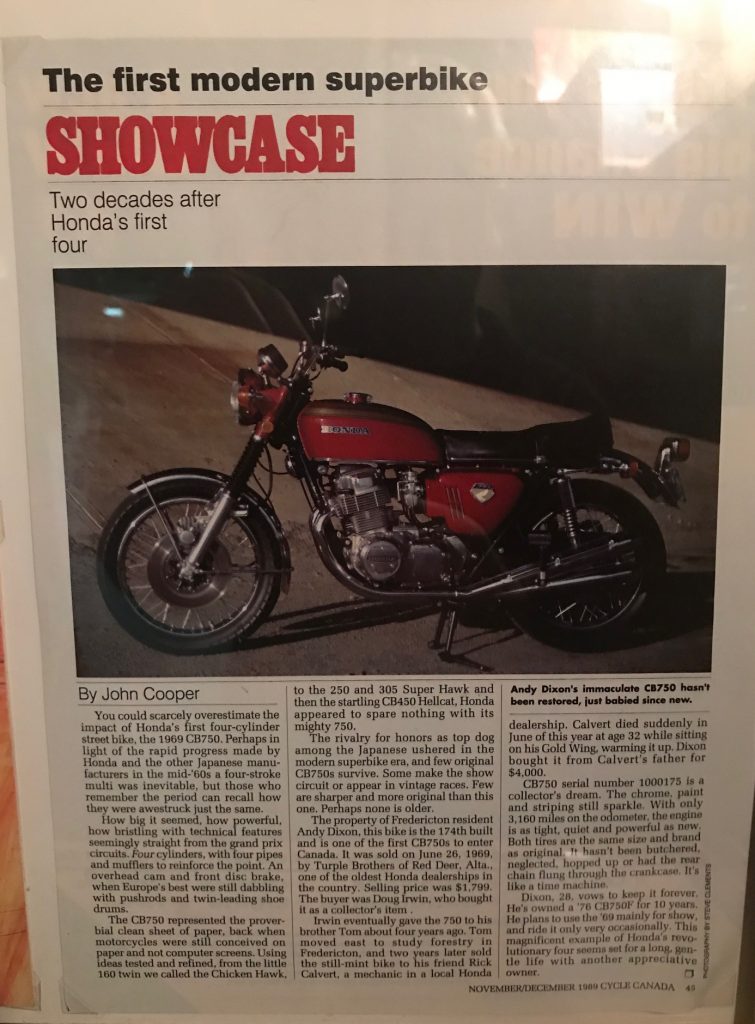