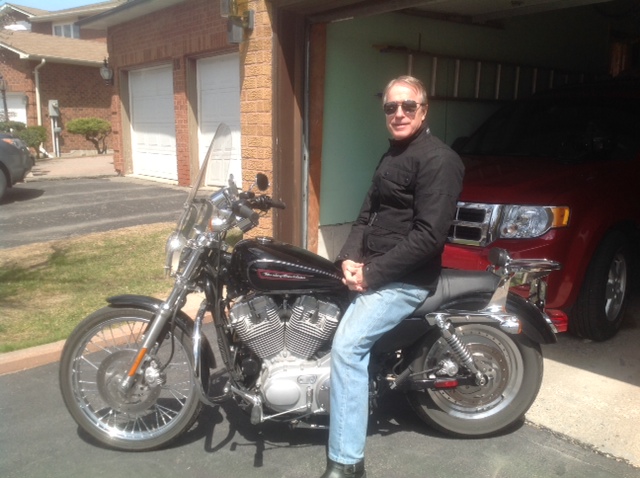 In October 1965 I bought a used Honda S-90 at Honda dealership Newman Motors in La Salle, Quebec, for $300 (new ones were $465). A month later I got my license, and that night we had a snowfall; after a brief ride in the snow I parked the bike for the winter. Nineteen sixty-six was an interesting summer for me, after one year of university—my first summer with “wheels,” and with a girlfriend, Lorraine.

In the evenings several of us would meet at the “Bo-Peep,” a BP gas station in Dorval. We all had small motorbikes. Wayne had a Honda CA-95 (150), Ken had a Suzuki 120, and Gary from Nova Scotia had a Honda CB-160. A normal evening ride for us was a circular route following the shoreline around the West Island of Montreal, going west along Lakeshore Road from Dorval Avenue all the way to Ste.-Anne-de-Bellevue. Then we’d ride north under highway 20 and into Senneville on Senneville Road and then east on Gouin Blvd to Pierrefonds and over to Sources Road, then south back to the Bo-Peep gas station.

The evening of July 23rd, 1966, started out normally. Lorraine and I and Wayne (and his friend Terry as passenger) and Ken and Gary started out on four bikes from Bo-Peep, heading west along Lakeshore Drive to Ste. Anne de Bellevue.

In Senneville we approached a hill with a blind crest. I was in the lead, and my Honda 90 with Loraine as passenger struggled to do 30 mph up the hill. Wayne on his 150 grew tired of following me and my slow pace, and he pulled out (across the double solid line) into the oncoming lane and passed me on the hill in the left lane, and Ken and Gary followed.

Unfortunately, the Senneville police car approached us westbound, coming over the top of the hill. There was Wayne and his 150 in their lane, coming towards them.

The police car took evasive action and hit the shoulder. Wayne, with passenger Terry, kept going and headed down the road, along with Gary and Ken on their bikes, leaving me behind.

Since I had not done anything wrong, Lorraine and I continued to ride eastbound along Gouin Blvd at the 30 mph speed limit. After a few minutes, I saw headlights in my rear view mirror, and the shape of a police car became evident. He followed me for a few minutes, then turned on the flashers and pulled me over. The policeman and his partner asked to see my license, and asked where the other three motorcyclists were. I could honestly tell him I had no idea where Wayne & Terry and Ken and Gary now were.

One policeman looked at my driver’s licence then told me to get moving, and that I would be hearing from them.

Lorraine and I rode away eastwards for about five minutes. But Lorraine, who (it turned out) had a crush on Wayne, kept nattering to me that we should wait for Wayne to catch up. I finally gave in, we parked on the side of the road for 30 minutes or so, and waited for the other guys to catch up to us.

The evening grew dark, Lorraine finally agreed that the other guys were not coming our way, and we continued on our ride to get back to the BP gas station, to meet the guys.

I was still wearing sunglasses from earlier, and as we rode along, Lorraine nattered again in my ear, something about Wayne. I looked back to reply, but just then we rounded a left-hand curve in the road, which I had not seen with my sunglasses on. I yelled “Hold on!” and hit the brakes. We skidded on the gravel shoulder, then went down, and sliding on the right side of the Honda 90 we hit the ditch. When we got up, my right ankle hurt and I could hardly walk, and I checked Lorraine who was fine except for blood running down her face from a small cut on her right forehead. I moved Lorraine away from the roadway and I limped to a house that had lights on. I found an older couple there, told them what had happened, and they called for help.

A little while later a Pierrefonds police car arrived, and the police took us on a “fast and furious” drive south on St. John’s Road, with lights and siren turned on, to the Lakeshore General Hospital in Pointe-Claire. The doctors took care of Lorraine first, because of the blood on her face. I phoned Loraine’s parents to tell them where we were. I sat in the Emergency department for quite a while, and then I heard the sound of motorcycle engines. Our riding companions had arrived.

Apparently after the guys had passed me on the hill and almost hit the westbound police car, they all turned onto a side road, waited there behind some trees until the police car came back eastbound, and then retraced their route back to Dorval and the BP Gas station, to wait for us. When we did not make it back, they phoned Lorraine’s parents who told them where we were.

Lorraine’s parents came to the hospital to pick us up and take us both home, and the next day my father, a non-rider, rode the Honda 90 back home.

Lorraine was fine; she had worn a helmet and she had only a tiny cut on her forehead. A week later I returned to my summer job. Lorraine and I broke up the following week.

I bought a new ’66 Honda Super Hawk one month later.And I’ve had no accidents in the 51 years since that night.