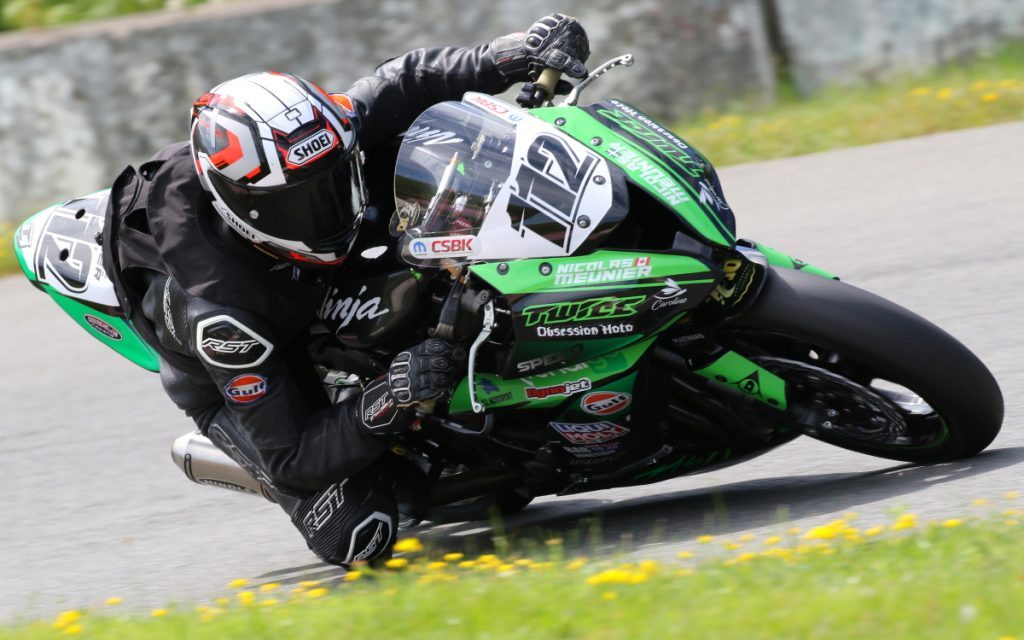 Turcotte Performance Kawasaki youngster Nicolas “Nico” Meunier has been named the recipient of the Brooklin Cycle Racing Pro Rookie of the Year award for 2019, clinching the title with a strong finish to his Mopar Canadian Superbike Championship season at Canadian Tire Motorsport Park.

The 17-year old Verdun, QC phenom entered the Pro ranks with high expectations in 2019 after becoming just the eighth rider ever to graduate from the Amateur ranks at age 16 or younger, a list that includes fairly historic company with the likes of 13-time National champion Jordan Szoke, former World Superbike rider Brett McCormick, and X-Games gold medallist Cody Matechuk, amongst others.

However, Meunier delivered on those expectations in a big way despite one of the strongest Pro fields in recent years, finishing tenth out of 25 point-scoring riders and 43 entries overall in the Mopar Pro Superbike feature class.

Even more impressive is that Meunier managed to do so on a Kawasaki ZX-6R sport bike machine, ranking as the top 600cc rider in the Superbike field and one of only three inside the top-20. The reigning Amateur runner-up also had a strong season in the Liqui Moly Pro Sport Bike class, finishing fifth overall, though only results in the Pro Superbike class count towards Rookie of the Year scoring.

His best finish of the year was a strong eighth place finish in race one of round four at Atlantic Motorsport Park, which was tied for the best finish of any rookie this season, though most of his damage came via consistency, finishing inside the top-15 in all but one race (a DNS in race two at AMP) and top-12 in three of the first four races.

While it didn’t count towards his award nomination, Meunier also had a terrific season in the Sport Bike division, finishing fifth overall and just 17 points behind fellow Kawasaki rider David MacKay in fourth. His best performance came in race two at AMP, a fourth-place result, but he once again made an impact through consistency, finishing all but one race in fifth or higher – a crash in round three, though he was fighting for his first career podium finish prior to the incident.

The 17-year old will become the youngest Pro Rookie of the Year winner since a 16-year old Tomas Casas split the award in 2015, though both riders represent the only under-18 winners since 2011.

With past award winners combining for eight National championships and 61 Pro victories since its creation in 2000, Meunier will have a shot at creating some history of his own as he continues to develop, perhaps aiming to score his first career Pro podium as soon as the 2020 season.

The full list of past Rookie of the Year winners, as well as full results from the 2019 campaign, can be found on the series’ official website at www.csbk.ca.