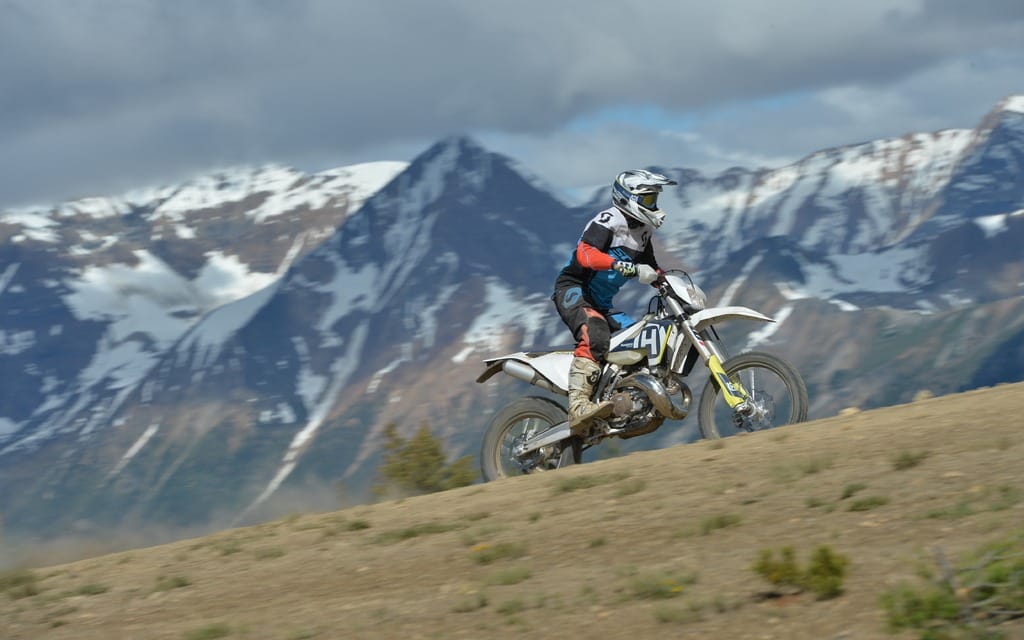 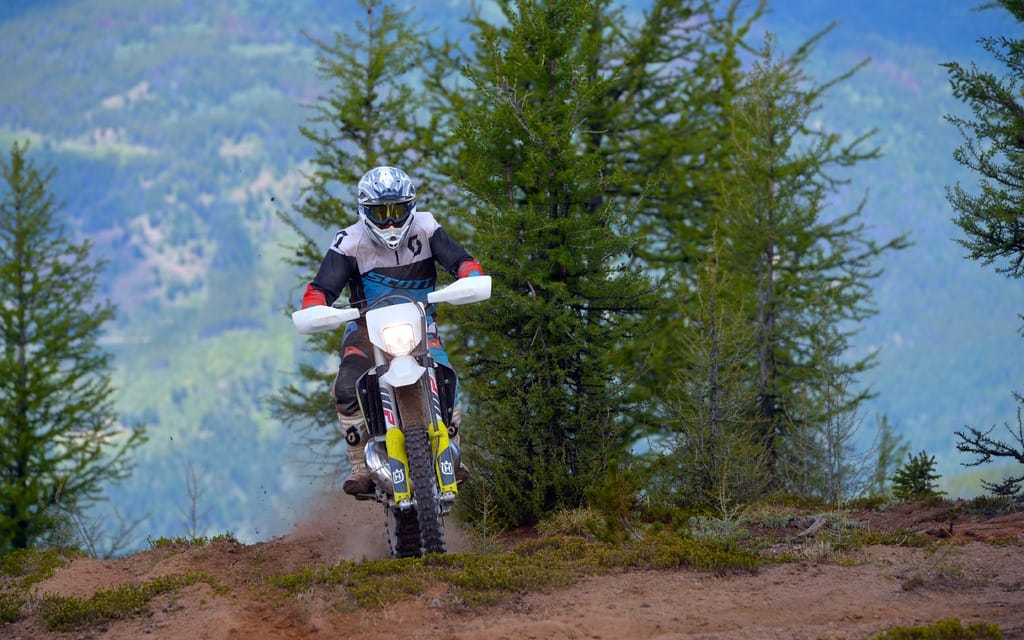 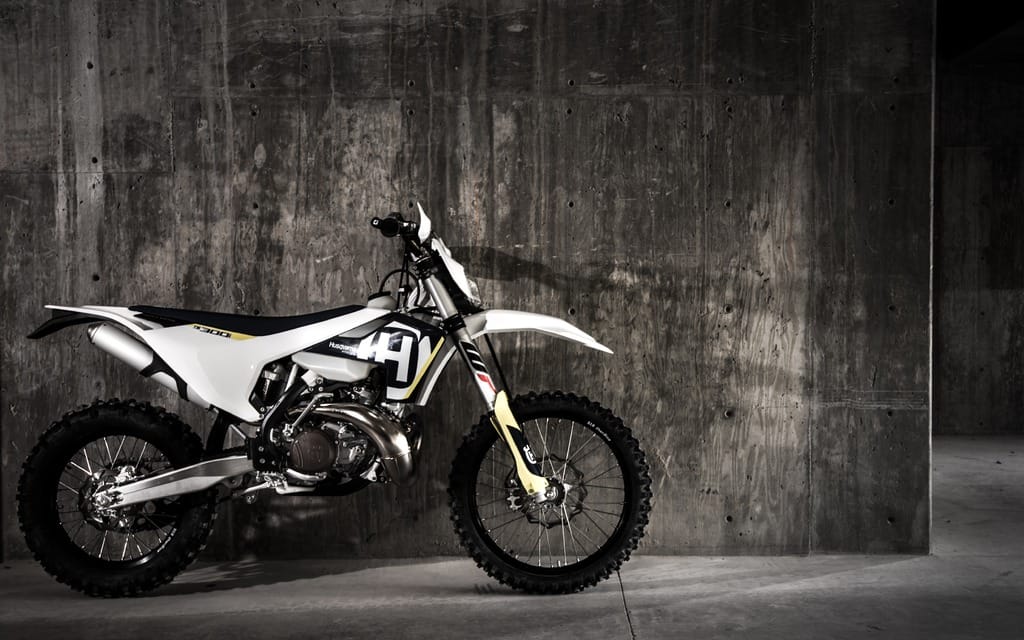 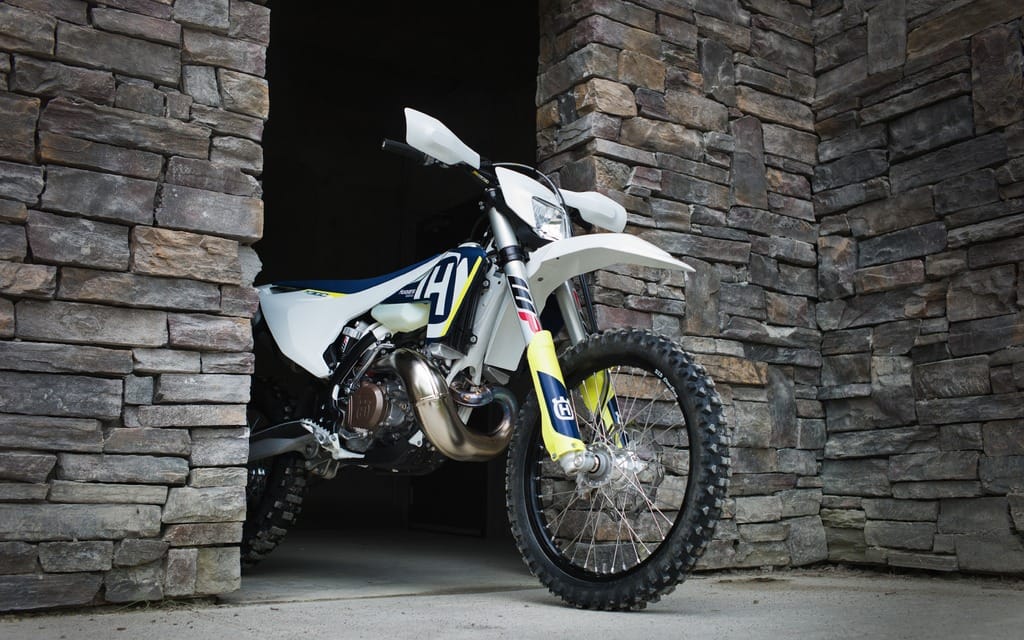 Husky advances two-stroke technology with smooth new models
Who said two-strokes were a dying breed? Following sister company KTM’s release earlier this year, Husqvarna Motorcycles is taking a big leap forward, introducing a revolutionary electronic fuel injection system on its TE 250i and TE 300i two-stroke enduro models. Visually very similar to the rest of Husky’s line-up, this new technology redefines both the market and future of two-stroke offroad competition motorcycles. We were invited to the launch of these two new models at Panorama Mountain in British Columbia.

The day’s program was simple: climb the mountain as many times as possible through trails as rough as possible. We were in for a helluva ride. Just getting to the base of Panorama, which is located in the Purcell Mountains near Invermere, will get you high, 1,150 metres, that is.

Leaving the charming village, we barely rode a kilometre before attacking a steep hill climb, no time to warm up, it was full throttle for the climb to the top at 2,300 metres. The bikes didn’t seem to mind though. The first thing I noticed was the sound level of the motorcycle. They are quieter than regular two-strokes and don’t have that ring-a-ting-ting typical noise, at least not as pronounced as regular two-strokes. They still retain a two-stroke character while also offering the benefits of reduced emissions and a notably lower fuel consumption that seriously increases the bike’s autonomy for long days in the saddle.

But the big features are certainly the elimination of the need for oil premix and jetting changes. Featuring a pair of fuel injectors positioned at the transfer ports, the new system delivers the perfect amount of fuel into the engine at all times, across all conditions. It provides a smooth and clean power delivery on both machines. Thanks to injectors delivering the fuel mixture downwards into the transfer port, the system ensures a much more efficient combustion.

Technically, a lot of things happen in that little mill. Carefully placed at the rear of the cylinder, a special tube relays intake pressure data to the new ECU. Gathering information from the throttle position sensor, the air and intake pressure sensors, together with the crankcase pressure and water temperature sensors, the ECU automatically compensates for temperature and altitude changes eliminating the need to modify carburettor jetting going up the hill. What it does for the rider is allow a steady and reliable power delivery in ever changing conditions.

The Panorama environment was certainly a good choice to allow us to test these statements. Any skier who rides has dreamed of riding a motorcycle up these hills and we were offered just that. A steep climb to test the bike’s fuel injection system in varying altitude. A perfect place to see how the engine adapts. We weren’t disappointed. My first climb was on the 250. I clicked the first gear, then the second and third gear to gain momentum before attacking the slope. As the steepness rose I had to concentrate on my position but also listen to the engine. I ended up in second gear all the way.

Later that day, riding the same hill on the 300, I could easily see the difference in power. Where I had to manage throttle and gears on the 250 to make it to the top, the 300 didn’t even stutter. I could even accelerate as long as grip was there. Although the bikes are physically quite identical, the 250 engine was a charm in the tight sections where its bottom end was allowing me to stay in the same gear while negotiating rocks, roots and trees. The bikes are similar but overall I favoured the 300i power.

A standard map select switch on both bikes allegedly allows riders to customize power characteristics according to personal preferences or in varying conditions. The no-nonsense Swedish approach named these maps simply “map one” and “map two.” Map one is standard and map two is smoother through the entire powerband. Although very similar, map one offers quicker throttle response and worked great on the wide-open, steep uphills we rode throughout the day. It wasn’t until I rode on map two that I realized how smooth and tractable each bike was. Unfortunately the switches and engine maps weren’t perfectly set on all bikes. Some journalists felt no difference at all between the maps but most bikes were fine. They told us the engineers didn’t have enough time to work on this before the launch but it is a detail that is probably already settled by the time you read this.

Both models feature a 39 mm Dell’Orto throttle body that is linked to the new dual-cable handlebar throttle assembly. With a new throttle position sensor (TPS) relaying airflow data to the ECU, the system ensures an optimal air, fuel and oil mixture. Additionally, the system features a bypass screw for idling speed regulation, with a cold start device providing more air for cold starts. The bikes were easy to start and felt good going quickly.

Vital for crankshaft, cylinder and piston lubrication, the two-stroke oil is stored in a separate tank that together with an electronic oil pump eliminates the need for pre-mixing. With its filler tube running through the upper frame, the 0.7 litre tank contains oil for five to seven full tanks of fuel depending on riding conditions. Controlled by the EMS, the oil pump delivers the ideal amount of oil according to the current RPM and engine load reducing waste as well as excessive smoke from the exhaust. The average ratio achieved for fuel/oil is 80:1. Riding in a group of two stroke motorcycles, one usually gets a high from the exhausts but with these new engines, we were able to breath the fresh Panorama Mountain air even while we were waiting in a group for our individual photos. A welcome improvement for two-strokes and a technology that renders a two-stroke bike more interesting for environmentally friendly riders and their neighbours.

The airbox features a new intake snorkel that is adapted to the new throttle body and holds the air temperature sensor. Air filter access remains tool-less, with the standard Twin Air filter and failproof filter cage ensuring maximum performance and ease of maintenance.

The two models feature a fuel tank made of translucent plastic so the fuel level can be checked quickly and easily. The fuel tank has a 9.25 litre capacity and houses an integrated fuel pump and fuel level sensor.

The premium motorcycles also come equipped with D.I.D. rims, Metzeler tires and a WP Performance System–designed front fork. The forks were specifically designed for enduro riding and consist of an open cartridge layout with a spring in each leg and split damping functions. Compression (left) and rebound (right) can be adjusted via clickers situated on top of each tube. Fork pre-load can also be modified without the use of tools, via the standard adjuster.

These suspensions worked like a charm and smoothly absorbed everything we could throw at them. They gave excellent feedback and kept the traction needed on these hilly trails at an optimal level. You could feel the precision offered by the front fork as well as the rear suspension’s optimal grip for a truly excellent ride. When the trail opened up and we could click the fourth gear, the suspensions offered excellent stability as well.

The hydro-formed, laser-cut and robot-welded frame expertly crafted by WP Performance Systems is no stranger to this excellent shock absorbing. The composite three-piece subframe is made of 30 percent carbon fibre, which makes it remarkably light (1.4 kg).The frame is also fitted with frame guards and an engine protector that bolts directly to the frame. The Huskys are serious trail bikes right out of the box.

A hollow, cast aluminum swingarm is designed to offer optimal stiffness and reliability at the minimum possible weight. The machining above the rear axle allows the chain adjuster markings to be seen from above for easy maintenance.

A new Magura front and rear braking system replaced the Brembo offered last year. They have a similar layout to the previous design (two piston front & one piston rear) with brake disks of 260 mm for the front and 220 mm on the rear.

Needless to say we needed strong and precise braking on this launch as the group leaders had been riding these trails for a few days before we got there and the pace was quite fast. I even crashed hard while descending a very steep hill thanks to my feet accidentally hitting the shifter to neutral before a big hole in the slope. It was superb! I landed flat on my stomach with the bike flipping over me.

All in all these two new models offer excellent performance in a premium package. The bikes look good, the engines react well and suspensions smooth everything out allowing you to concentrate on the task at hand. All you need to do is point them where you want to go and they will not only get you there but smack a big smile onto your face. Husquvarna claims to be a pioneer and proves it by offering a new technology that works and brings yet more choices to enduro enthusiasts.