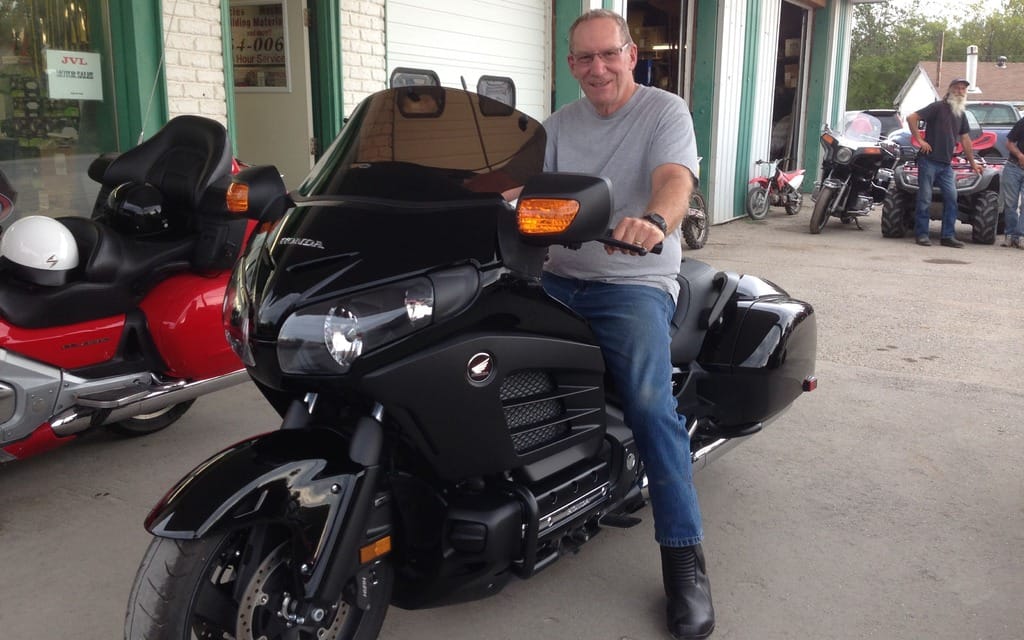 I want to share with you my re-entry into motorcycling after a 35-year hiatus. My last bike had been a 1973 Yamaha RT 360 Enduro, owned brand new for one year and quickly sold to accommodate my post-secondary education as an Industrial Arts teacher in Winnipeg. Fast forward to retirement from the public school system and on to a gig as an instructor at an adult ed trade school in Winnipeg.

My usual mode of transport to work was a bicycle, even during Winnipeg’s cruel winter. I decided a small scooter would be a rewarding tool to help me in the summer heat. Sure, I had a cage to drive if I wished, but rush hour motoring is never fun. I purchased a 2010 Honda SH150i. It was a blast around town, twist and go, with very little demand required from the rider. But on the highway, two-up with my wife, it was dearly wanting for speed and power. Being a gear head, I had put a slip-on pipe on the 150 to make it at least sound like a motorcycle instead of a sewing machine. After one month of ownership, Honda Canada was blowing out new Silver Wing 600 scooters for $6,500, and of course the little 150 was traded without a second thought.

Another two years passed, and I was getting bored. The Silver Wing had plenty of power for long distance rides, loaded with wife and luggage, but I needed more. I wanted the shifting, clutching, and total experience of a real motorcycle. The Silver Wing, even with my installation of an aftermarket performance exhaust system, just wasn’t cutting it for me. The two words “needed and wanted” were the cause of considerable consternation between my wife and me over going big or going home. After constant negotiation and begging on my part, she agreed that I could get my dream motorcycle. I had even gone so far as to suggest we just sell the Silver Wing and be done with it, as I was that unstimulated by scootering.

By now you’re probably asking what the hell did I want? A thundering, vibrating V-twin? Absolutely not. A fast and great handling sport tourer? Not interested. A Gold Wing with all the comforts of a country club membership? Not for me.

I wanted an anomaly, a bike that was smooth as silk, as powerful as almost anything on the road, and most of all a bike that would make me want to jump on and ride. That bike was a black Honda F6B bagger.

We are now at late summer 2014. I found one carryover black ’13 F6B at a tiny Honda dealer in the town of Pine Falls, Manitoba. I phoned the store and talked to the dealer principal, the shop foreman, sales manager, and the parts manager—they were all one and the same. He said he’d take my Silver Wing in trade, and I should just ride on out and take the F6B for a test ride. After a 90-minute ride from the big city to the town of 1,200 with my brother-in-law on his 600 Shadow, I saw the bike. The dealer had put an aftermarket tinted windscreen on. It looked fantastic. I was even more excited by the Cobra 6-2-6 slip on mufflers he had also installed. He gave me the keys, and I started it up, blipping the throttle to enjoy the sweet sound of a perfectly balanced flat six. It was music to my ears. However, the party ended rather abruptly as soon as I throttled back in third gear at 60 km/h to cruise through the town before hitting the road and letting her rip. The drone coming from the mufflers was so obnoxious I quickly made a beeline back to the garage. I told the owner I couldn’t even consider owning the bike with the slip-ons. He said, “You’re kidding. When I test rode the bike I didn’t hear any drone and thought the mufflers really complemented the bike.” We spent the next half hour together reinstalling the stock mufflers. I was in Shangri La again.

The deal was made, paperwork signed, and my brother-in-law and I hit the road back to Winnipeg. The first half of the route passes through beautiful Canadian Shield topography, complete with lots of tight high-speed turns through narrow blasted passages of igneous outcrops. The bike handled the curves like a locomotive on rails. Exiting the Shield out onto the prairie, the road was a deserted ribbon of smooth asphalt. I twisted the throttle and left my riding companion invisible in my mirrors. The bike jumped from 100 to 150 km/h in seconds. I was elated. When we stopped halfway back to take a break, he said I had a grin from ear to ear.

That was in August of 2014. I’m now age 66, have 20,000 kilometres on the bike, have added many farkles and sparkles, and am champing at the bit to ride again in Spring. There is nothing I like more than going for a long ride out in the country, my bike humming along with the oldies from the stereo reminding me of my youth. That elixir of stimulation and nostalgia no doubt contributes to my wellbeing and positive psyche.

My message to all motorcyclists out there is this: Time seems to go by exponentially faster the older we get. If you’re not happy with your ride or your riding, do something about it. Enjoy our great sport as long as you can.