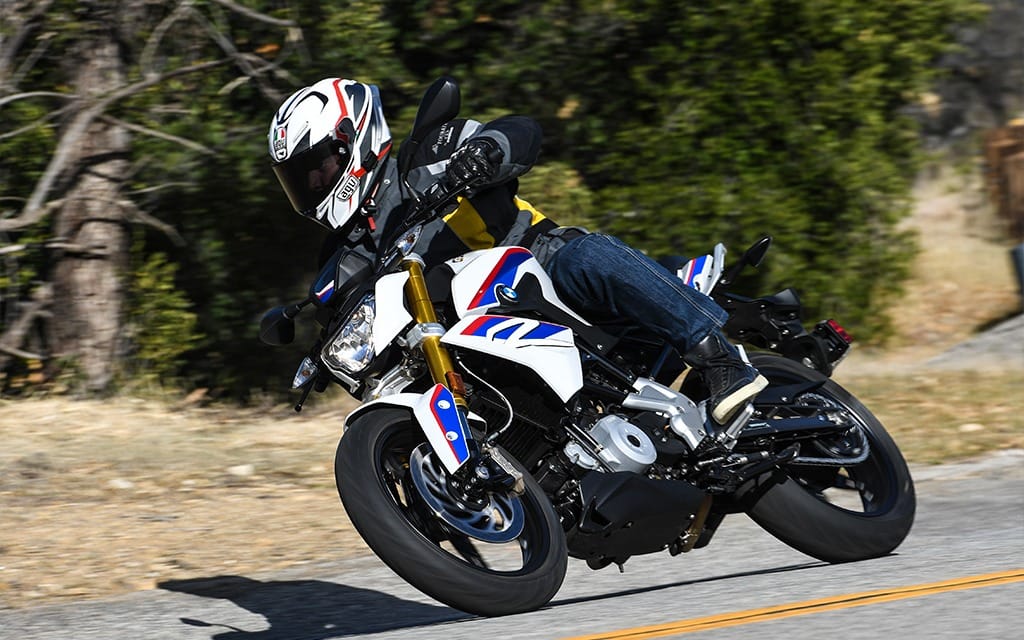 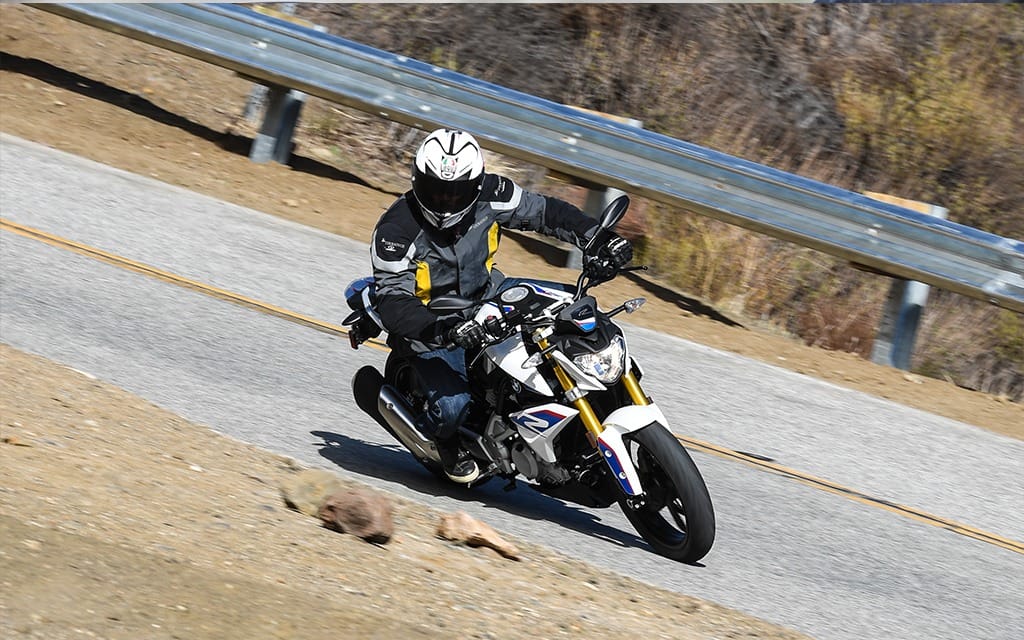 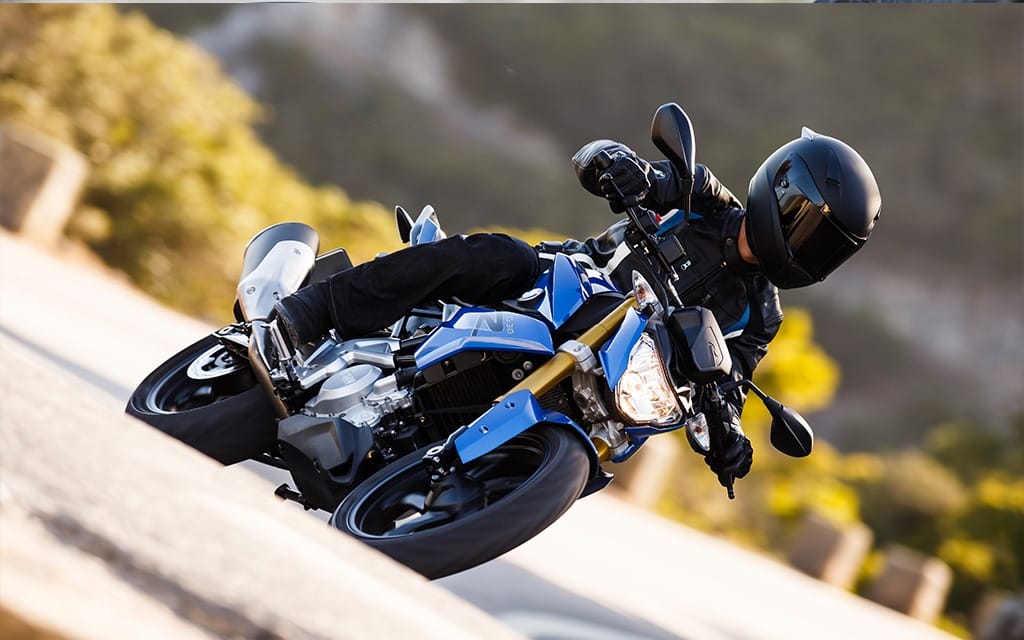 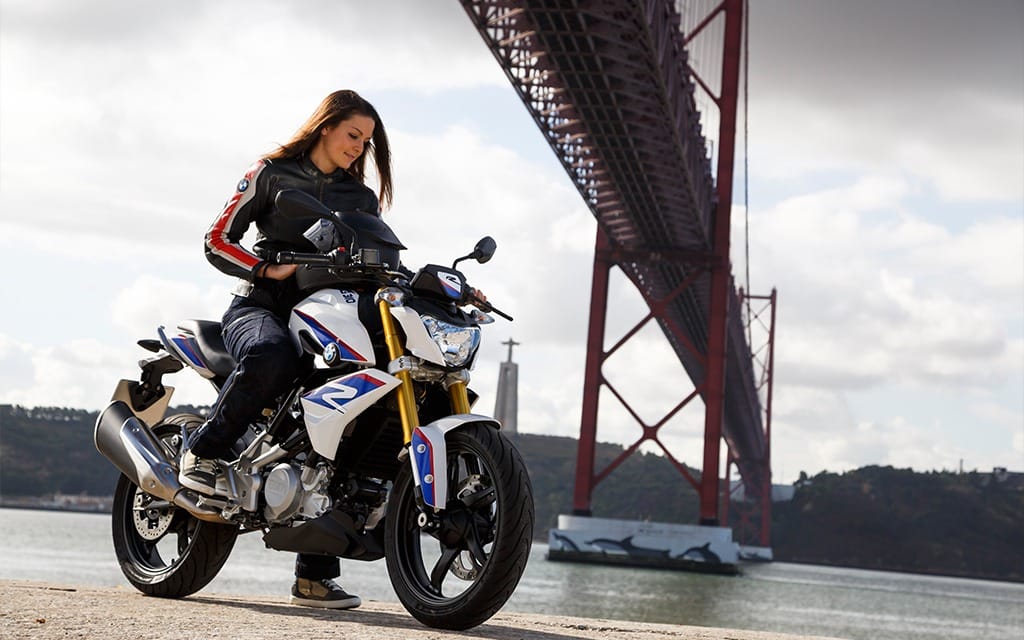 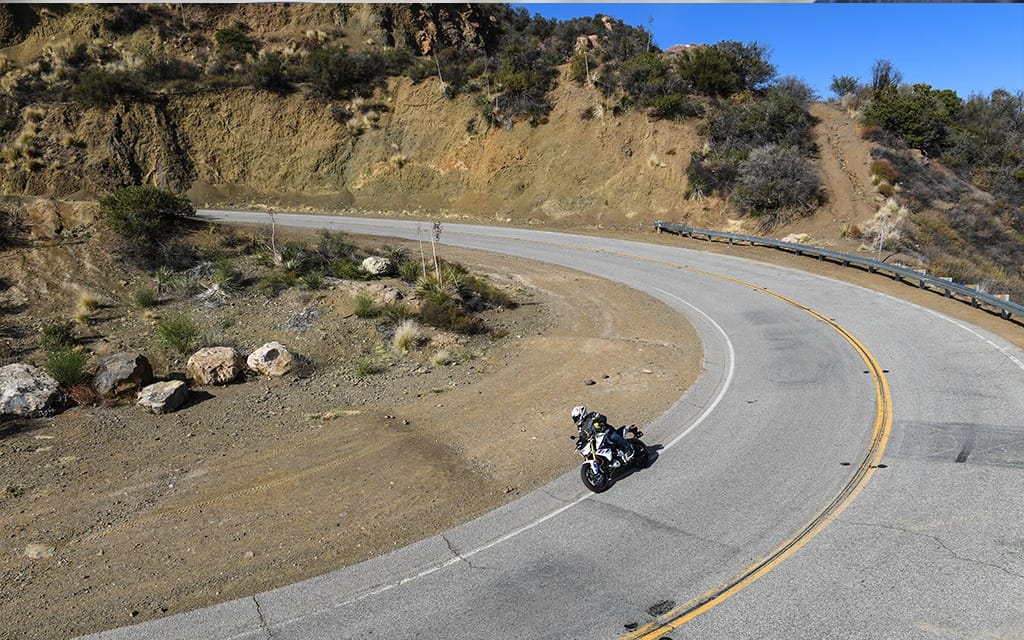 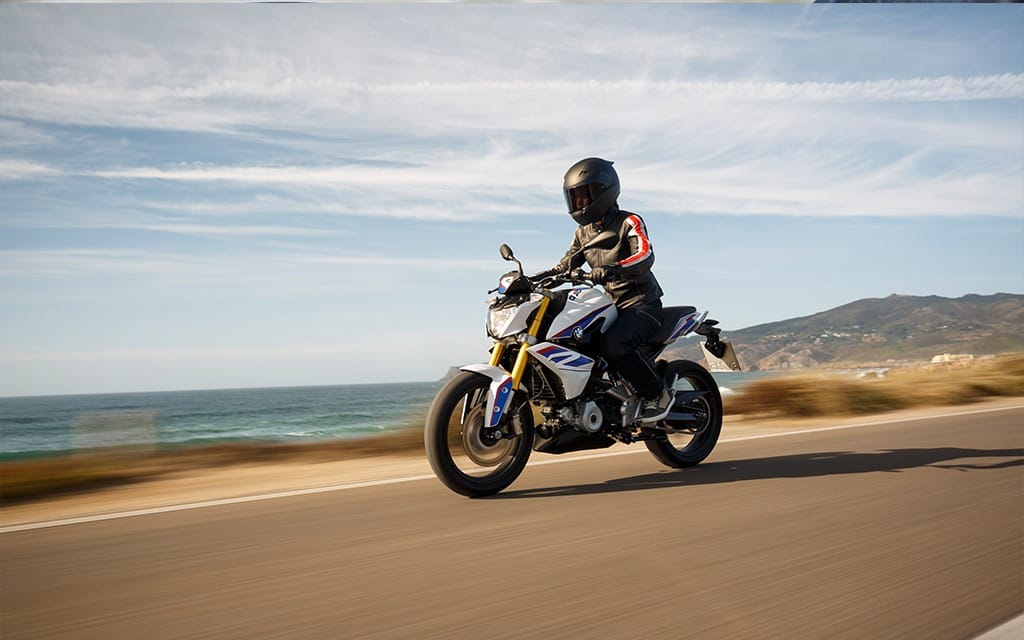 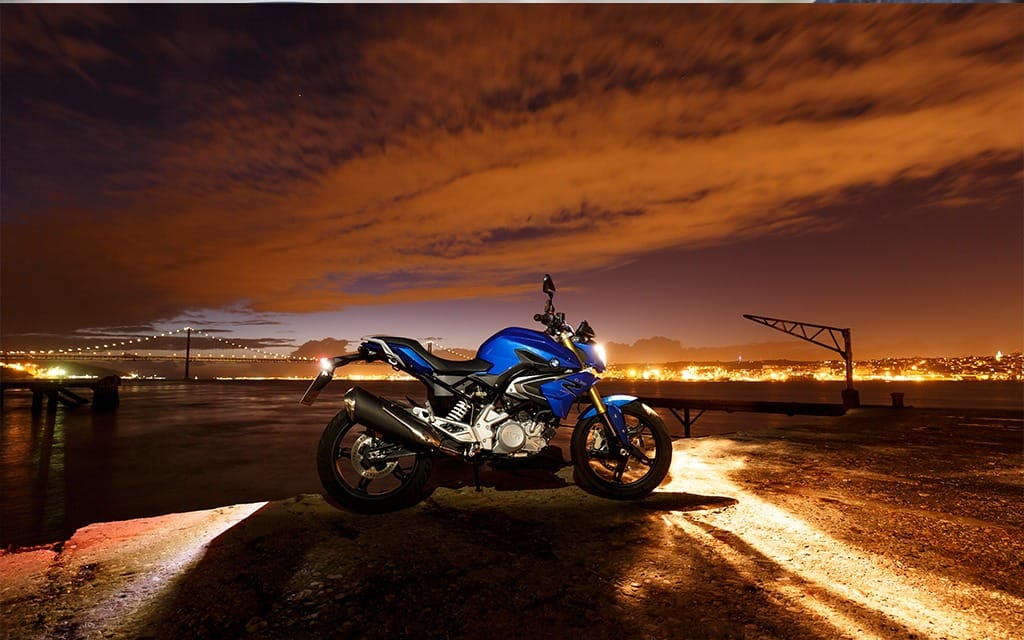 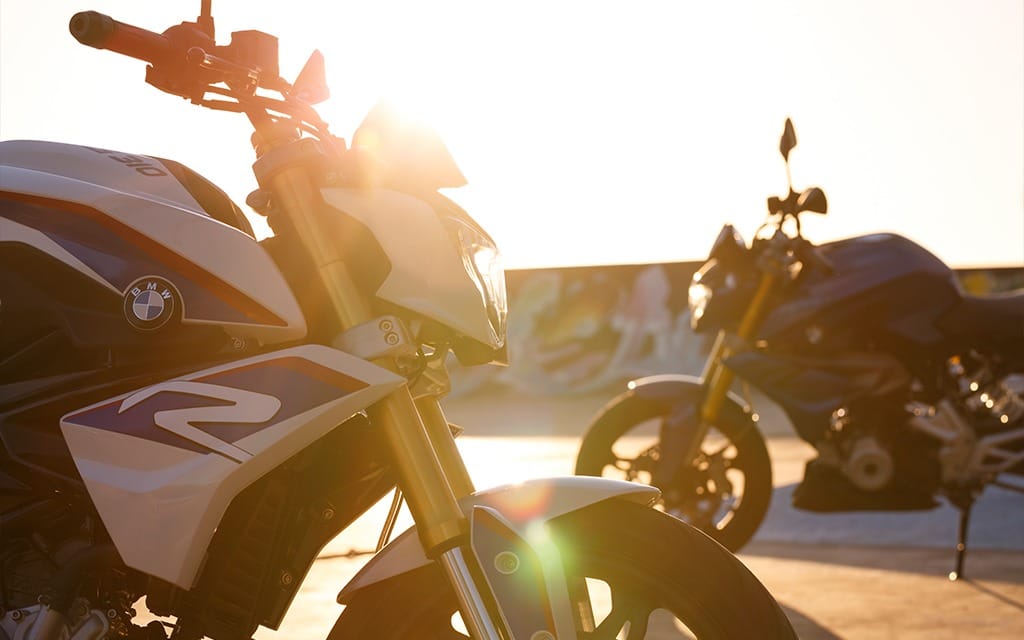 BMW G310R: Little engine that could

BMW’s small-bike entry impresses with looks and performance
Many manufacturers already offer small-displacement motorcycles but BMW had not yet offered a model for this market. It’s now done with the G310R, the first real entry-level bike available from BMW Motorrad.

When I first saw the bike, I was amazed by its size and looks. This 313 cc bike is actually not that small. Instead, it looks like a much more powerful motorcycle, which should appeal to beginners, vertically challenged riders, and riders who don’t want to invest 10 grand on a motorcycle. In fact the G310R can appeal to many people.

The models we were presented with were all white in colour with red and blue accents, offering a “race” look that is rather appealing. The irregularly shaped front headlight and side panels surrounding the front of the engine as well as the fork fins add to the high-end look of this motorcycle. With the saddle installed at 785 mm, I felt immediately at ease with my 5’10” frame but I wondered if a driver of more than six feet would also be comfortable. Thankfully a slightly higher “comfort” saddle and also a lower saddle are offered as options to meet all needs. BMW realizes that such a motorcycle has to meet the needs of a wide range of riders.

The single-cylinder four-stroke engine has a modest stable of 34 claimed ponies but is torquey (21 lb-ft claimed) and allows surprisingly swift starts. By thoroughly exploiting the whole length of each of the six gears you get decent acceleration that is slightly above the average of this category. At 100 km/h on the California highways and an rpm level of about 6,700 the bike is stable and comfortable and there is still enough power to overtake safely. I did not dare to twist the throttle fully but I could easily accelerate to 145 km/h without feeling that the bike was above its capabilities. In fact, it was only around 115 km/h that I felt a slight vibration in the handlebar and footrests. Even though our ride pace was quite fast the fuel consumption was minimal. In normal day-to-day use the numbers should be close to the manufacturer’s stated fuel economy of 3.3 l/km. Pair this with a tank of 11 litres and you get 330 km out of a single tank. Not bad at all.

The little mill has a wide powerband and is very smooth. It’s perfect for urban commuting. There is no excessive heat at stops and the sound of the exhaust is pleasant but quite discreet. In addition to installing the crankcase in front of the engine, German engineers tilted the engine backwards and rotated its cylinder head 180 degrees, bringing the centre of gravity a little more forward and lower. This adds to the agility of the bike and makes it very easy to flip from one side to the other.

The Bybre (an Indian subsidiary of Brembo) brand brakes offer an acceptable level of braking for this small motorcycle but for hard braking you’ll need to apply convincing pressure to the brake lever. This is not a race bike, but with my weight of 175 pounds plus the 348 pounds of the G310R, braking was adequate for most of the ride, as long as I maintained a smooth flow through the curves.

The suspension is not adjustable and has obviously been designed to meet the needs of a wide range of users and reacts very well in normal, everyday use. The comfort level of this bike surprised me when the pavement became bumpy. On the other hand, during sudden, hard braking on downhill twitsties in the California hills I felt a slight loss of grip from the rear tire. On the other other hand, the inverted fork responded perfectly to direction changes and intense braking and contributed strongly to the fun we were having.

Of course, the G310R remains a small motorcycle with all the disadvantages that implies. Wind protection is minimal and the sheer size of the motorcycle makes it less visible in traffic. However, it is very comfortable, affordable, competent and just plain good looking. It is also an ideal tool for urban mobility. All good selling points for an increasing number of riders.

This bike will bring a smile to the face of a multitude of buyers: those who seek a motorcycle that is relatively inexpensive to buy and to insure, as well as those who seek an easy bike to start with. In a category that is attracting more and more riders globally the Munich giant is betting it can make its mark. In fact, the G310R can be a rich-people bike in some markets and a beginner bike in other markets. Either way, at such a good price for a premium brand bike, it’s a good deal.

BMW proved with its fabulous S1000RR that it can do very well on the first try in a new category. It could pull the same trick with the little G310R. In addition, with a price tag of $5,250 and a three-year warranty, no one can complain about not getting their money’s worth.

We will surely see other models using the same platform but for different skill sets. The G310R will be available next summer in metallic blue, cosmic black or pearly white (as in our photos). Consumers wanting more luxury than what’s offered on the stock model will have the choice of centrestand, heated grips, tank bags and saddlebags, 12-volt power outlet, and LED turn signals.