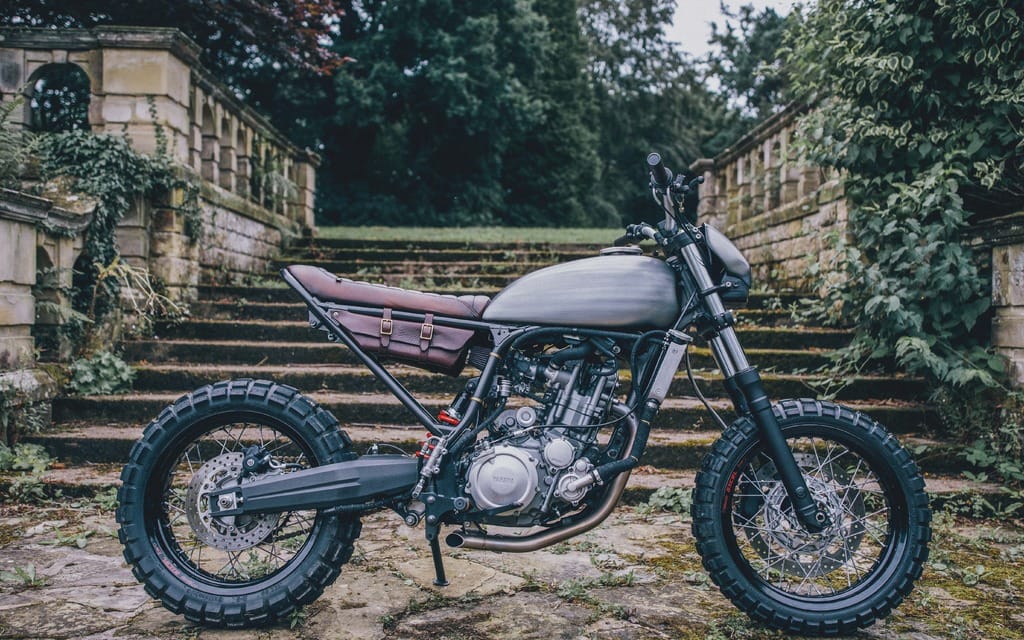 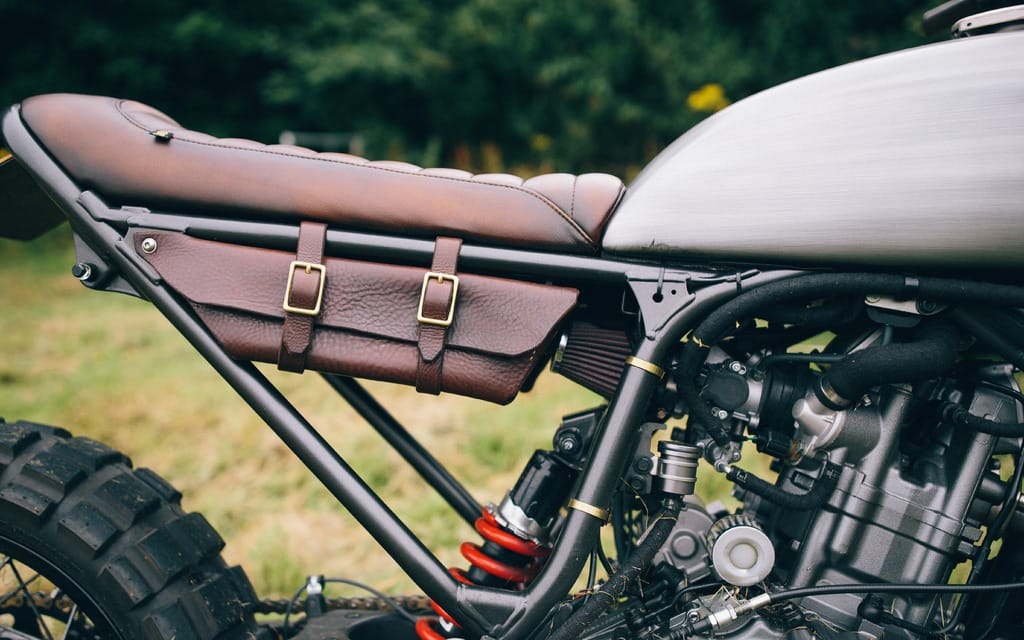 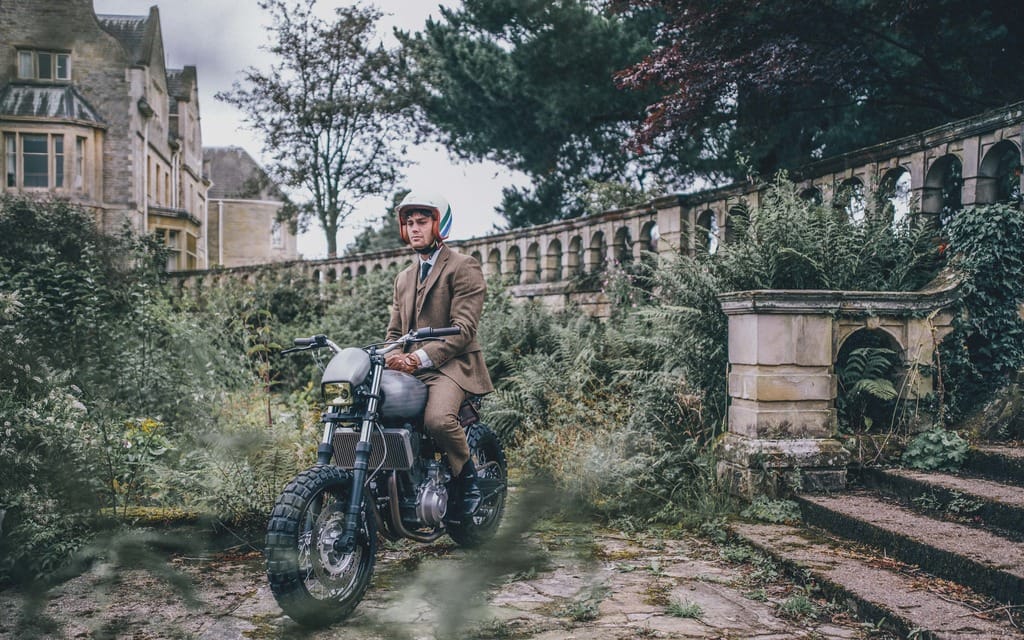 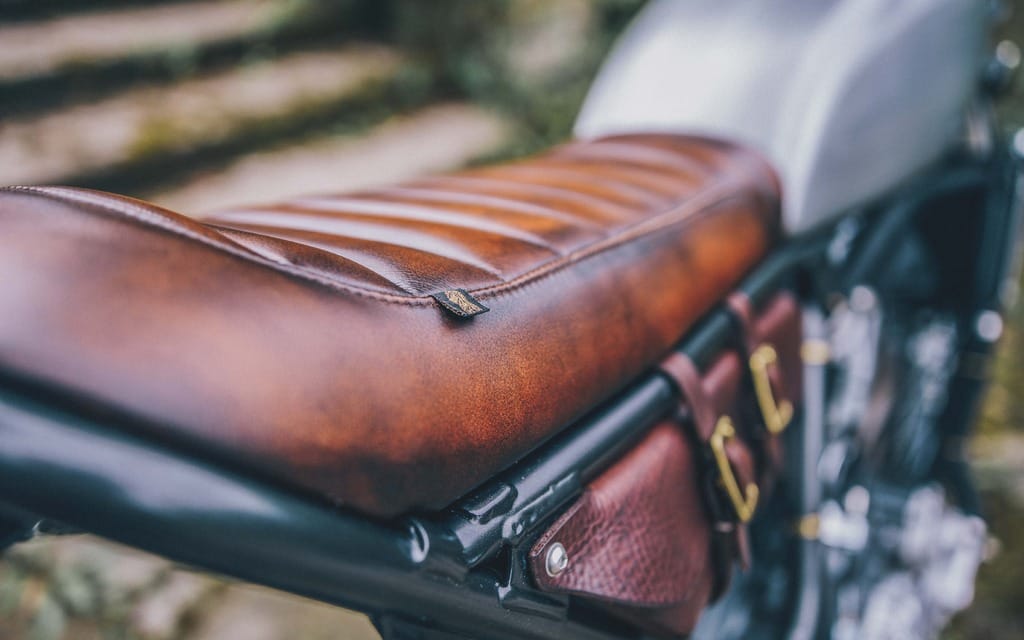 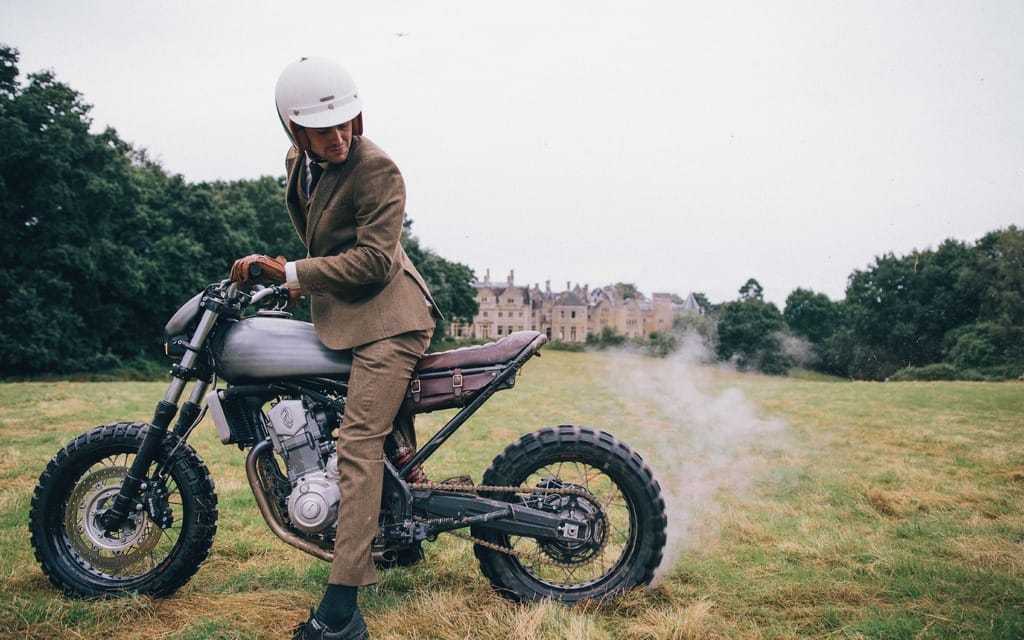 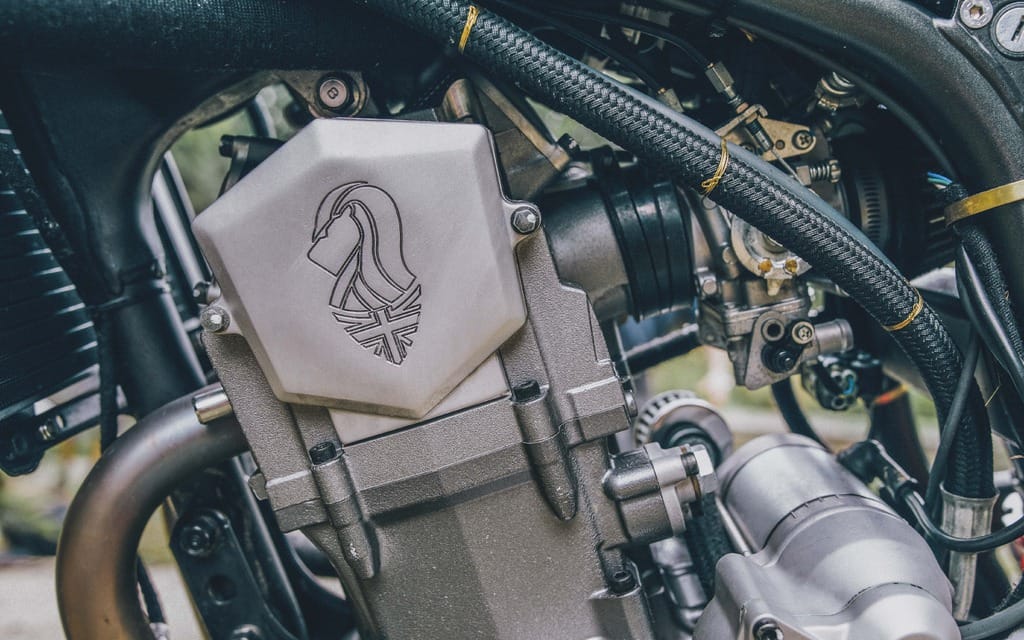 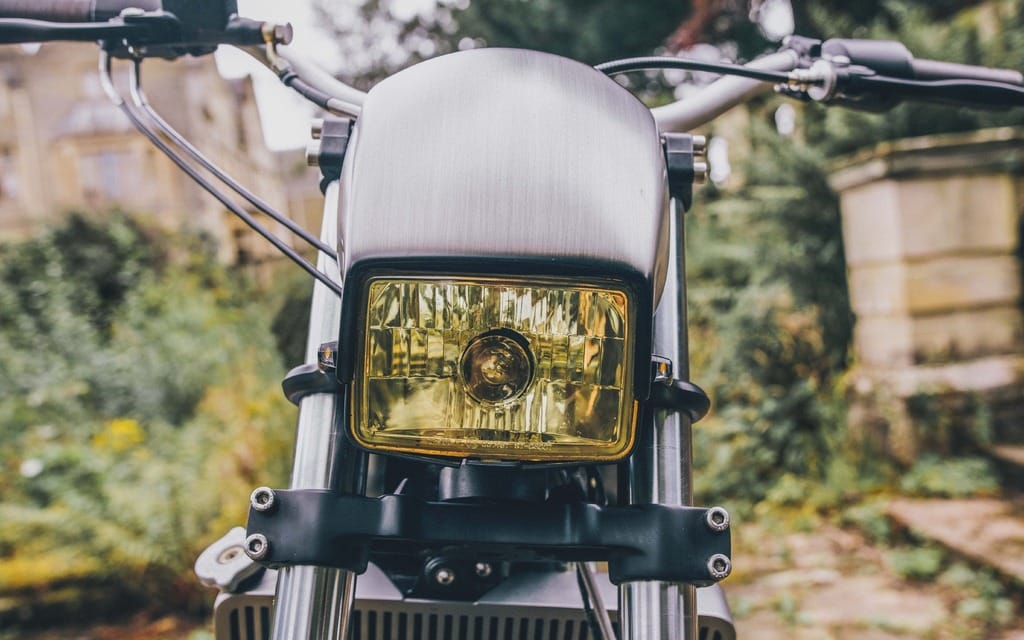 Old Empire steps off the pavement for a classic build
By Martin Hodgson, Pipeburn.com

The British Empire is still battling on and their latest weapon is a mud-munching steed with classic Rolls Royce sensibilities.

When you run a custom bike shop it can be a bit like being a realtor—no not being the brunt of jokes, but dealing with a public whose eyes are often bigger than their wallets. We’ve all heard about the guy who walks into a realtor’s office looking for a five-bedroom home with ensuite and spa bath on a large block of land with water views and available for only $100,000. The requests are often along similar lines at custom shops; however, they hold an ace the realtor doesn’t: they can actually create something to fulfil the outlandish request. So when a customer came to see Norfolk’s Old Empire Motorcycles with a request for a “motorcycle that’s reliable, something that you can have fun on and hammer hard but that’s comfortable enough for longer journeys, but most importantly that looks like the love child of a Mad Max bike and a Brough Superior,” the staff at Old Empire were listening. They had the skill and he had the funds and the result is this stripped-down and stunning 2013 Yamaha XT660X that hits the brief to a tee.

This is not the OEM’s first time here on Pipeburn; most famously they came second in the 2014 Bike of the Year Awards with their remarkable Ducati “Typhoon,” only losing out to Max Hazan. Which is absolutely no loss at all, kind of like coming second to Bill Gates in a wealth contest and they’ve continued to create beautiful customs since. But this build, “Tucano,” presented a new challenge: the company’s builds to date have focussed on low-down and lean rides, with clip-ons for an aggressive riding position. “After being approached by an ex sports bike rider who was looking for an ‘aggressive yet refined, and yet offroad-looking motorcycle, we decided to take the bull by the handlebars and give it a shot,” Alec tells us. A low mileage 2013 Yamaha XT660X, the supermoto version, was picked up and the plan and designs drawn up around the modern big single.

“All our commissioned bikes go through the same process, beginning with our five-point concept page, which lays down all the nitty gritties we need to know to get a good idea on what the customer wants and what we can provide.” The first thing the plan called for was to rip into the plastic fantastic XT and remove all the bits and pieces that weren’t going to be used. As it turns out that proved to be a huge amount of the stock bike, with the stock fenders, tank and plastics all removed and then the big clunky muffler, mirrors, indicators and absolutely everything else till just the engine was sitting in the frame. As it turns out under all the bolt-ons is a nice steel tubular diamond frame with dual tank rails, but even that wouldn’t be safe. “Although initial intentions were to not chop the back end of the bike too much, as it often does, one grinding disc led to the next and before we knew it all the pillion pegs were removed along with all bracketry and the rear rails simply looped, simple and clean.”

Between the shortened seat rails is a cleverly crafted box to store the electrics and keep them dry and out of sight. But they’re also easy to get to as the boys used the stock seat latch to secure the thick aluminum seat pan for an OEM finish, by OEM. The tank was always going to prove more challenging; like almost all modern bikes the dual tank rails of the Yamaha frame means it poses all the same problems of any twin spar construction and you have all the fuel injection gubbins to deal with too. How on earth do you mount a tank other than stock that is still able to clear the double back bone? Stock tank? No way! Custom tank? Why, when they have so many beautiful old units on the shelf! Solution? Start with a Kawasaki Z400 unit from the ’70s and cut the bottom out of it and then a “tidy web of panels silicon-brazed in the bottom along with mounting for the new pump to fit” to finish it off. Not only does it mount neatly on the frame, it does it while retaining all the smooth operation of the EFI system and still holds enough gas for over 100 miles of hard riding—job done!

While they were metal working they knocked out a stainless steel grille and cover for the factory radiator and it was transformed into something far more befitting of the build. “At the sharp end, we wanted something to complement the tank, something different and something that at least helped us create some lines from the front to the back. Another dive in the pile of unwanted produced a rectangular headlight which we ummed and arred about but eventually mounted it with our CNC mounts.” To finish it off a hand-beaten and wheeled front cowl not only lets the lines of the front flow into the tank but also neatly covers the original ignition switch and new MMB mini speedo. The incredible leather seat and mini satchels is something we’ve come to love and expect from OEM and the seat covering starts as cream leather that is then gradually dyed and rubbed until it matches the satchels’ finish.

To complete the looks “the rear part of the frame was repainted in the factory gunmetal grey and the rest given the black shuck treatment of a brushed satin imitation metal paint and everything clearcoated or bead blasted.” Making something so new look vintage cool is a skill the lads from Norfolk have turned into an art form and on Tucano they make it look almost effortless. One of their tricks is to include the small details in the plan and the fat bars by Renthal wear a pair of their brown leather grips. Adding more parts from their online store to complete the look are a set of leather-wrapped pegs and even the shifter pedal has a matching leather cover. The simplified switch gear keeps things clean and gets the electricals started that were run and wired by Willy from London Wiring Co. “The whole system has a quick fit charger lead and powercommander outlet neatly tucked into the leather pouches either side.”

Not only is the wiring tucked away for a slick finish but the quality of workmanship provides the reliability the customer was looking for, all of which starts with the engine. Old engines can be rebuilt, carbs can be retuned and electrical gremlins cured but when you want to hit the starter and have a bike run first and every time it’s hard to beat a modern engine. The dry-sumped, 659 cc, four-valve, Yamaha single is bulletproof and more than capable of handling the daily commute or a thrash in the forest. The engine runs 10:1 compression with a forged piston running in a ceramic coated bore and with excellent fuelling, having been tuned by Chris from Xbikes, there is instant torque whenever you snap the throttle. But all of that’s no fun without some sound and the cutback stainless headers now vent out each side under the footpegs with just a small baffle inserted into the pipes to contain the crackle.

To get the stance right the stock 43 mm forks were lowered considerably, but being the X model they come from the factory with increased stiffness and improved damping and they lose no performance with less travel. The X is also fitted with some Excel 17-inch rims and now wrapped in aggressive Continental Twinduro TKC80 Dual Sport rubber that gives a useability often not seen on pretend Scramblers. “All in all as a first stab at our first offroad and high-barred build we’re pretty damn pleased as is the customer, it’s a hoot to ride and sounds like it should, loud!” It’s a rare few who can say their first time leaves all involved satisfied and be telling the truth but Old Empire Motorcycles aren’t in the real estate game; what they are is one of the classiest Olde England outfits in the custom motorcycle business and the Tucano only helps to prove it.