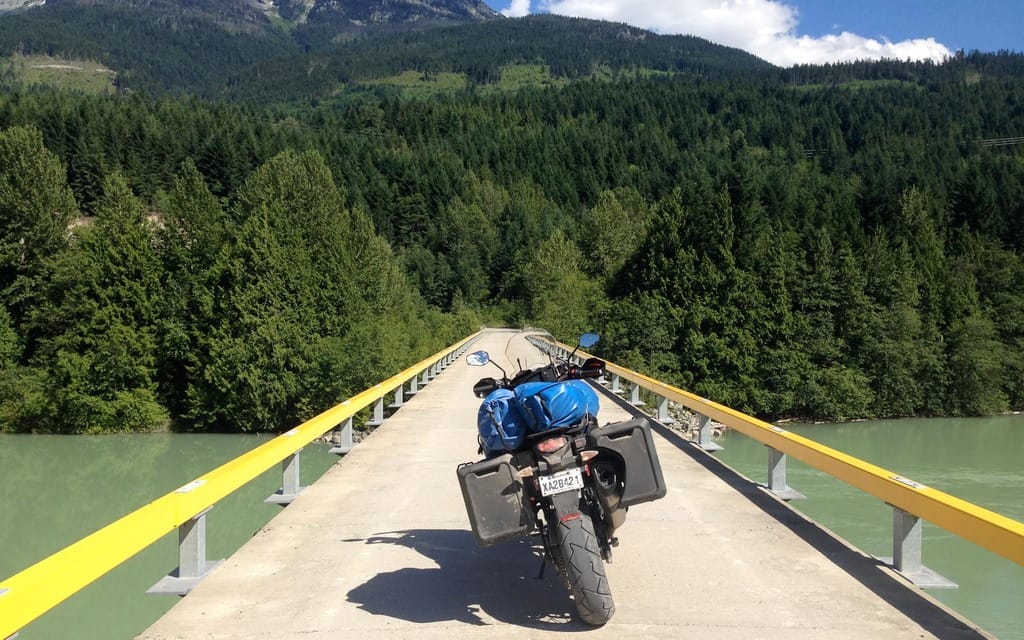 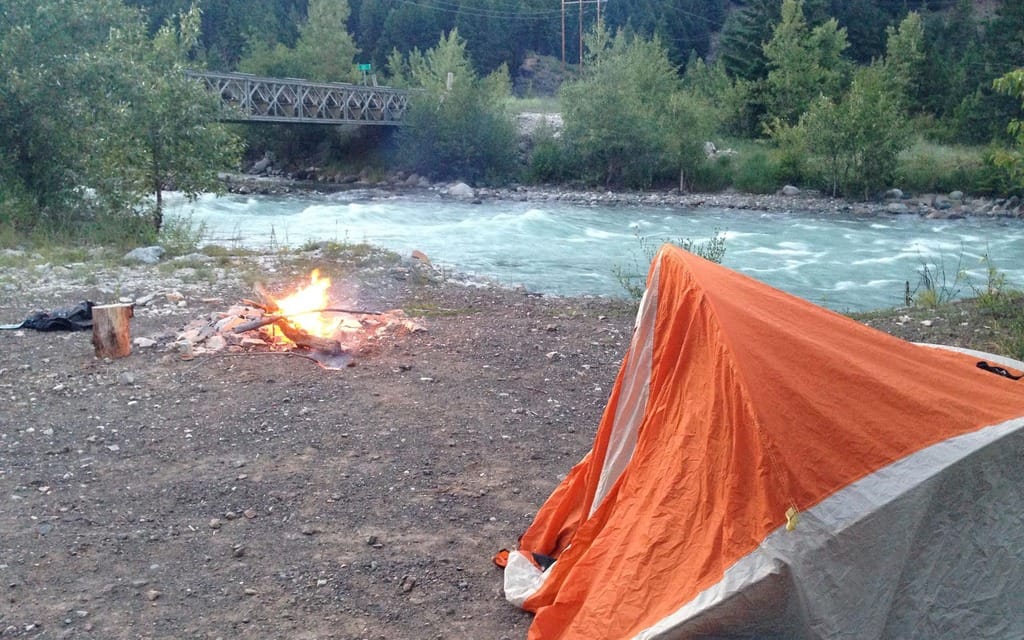 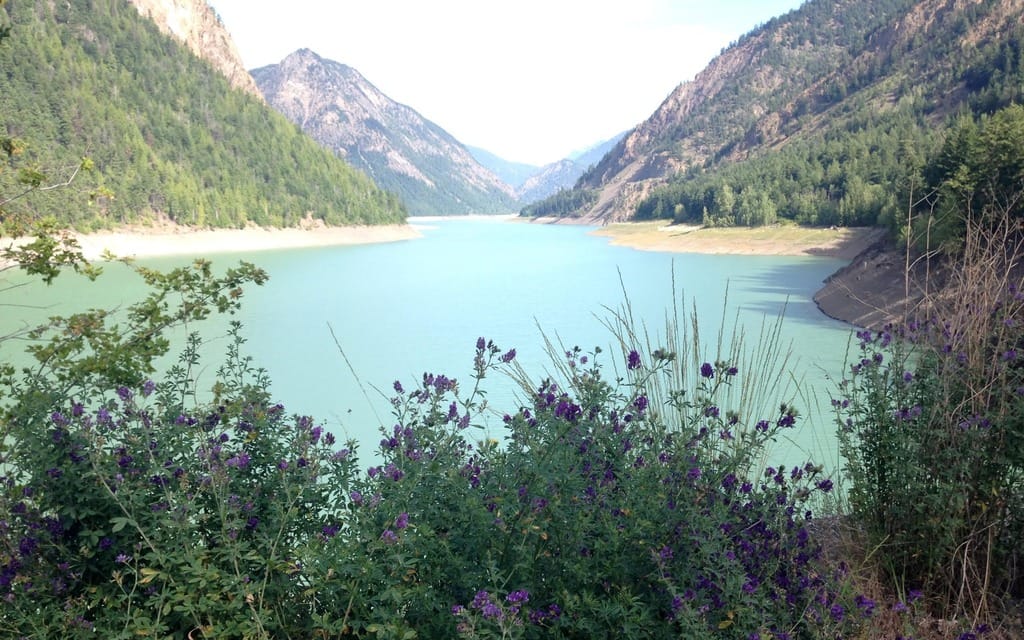 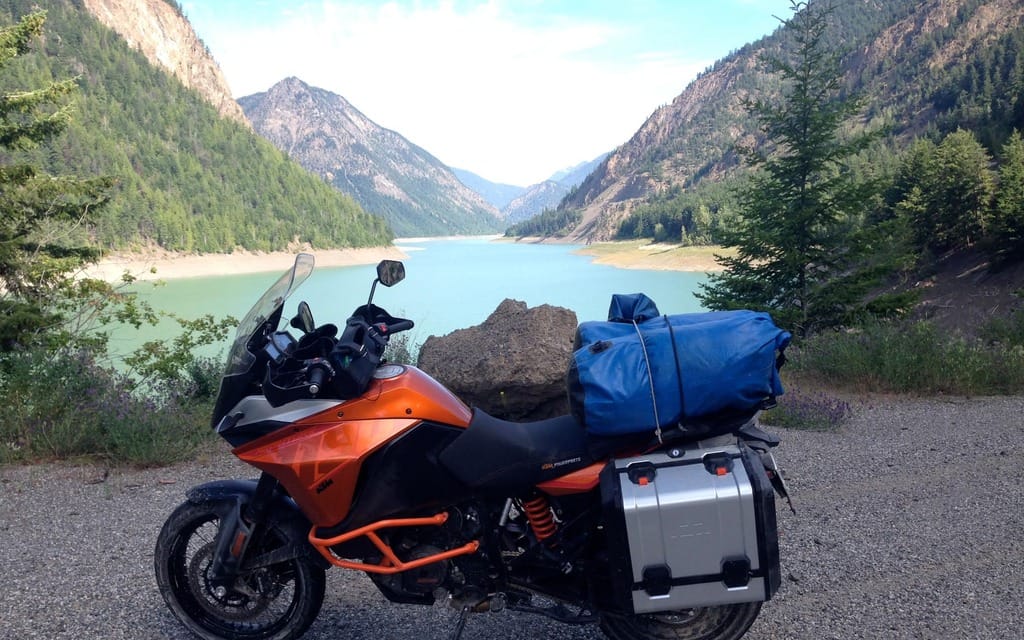 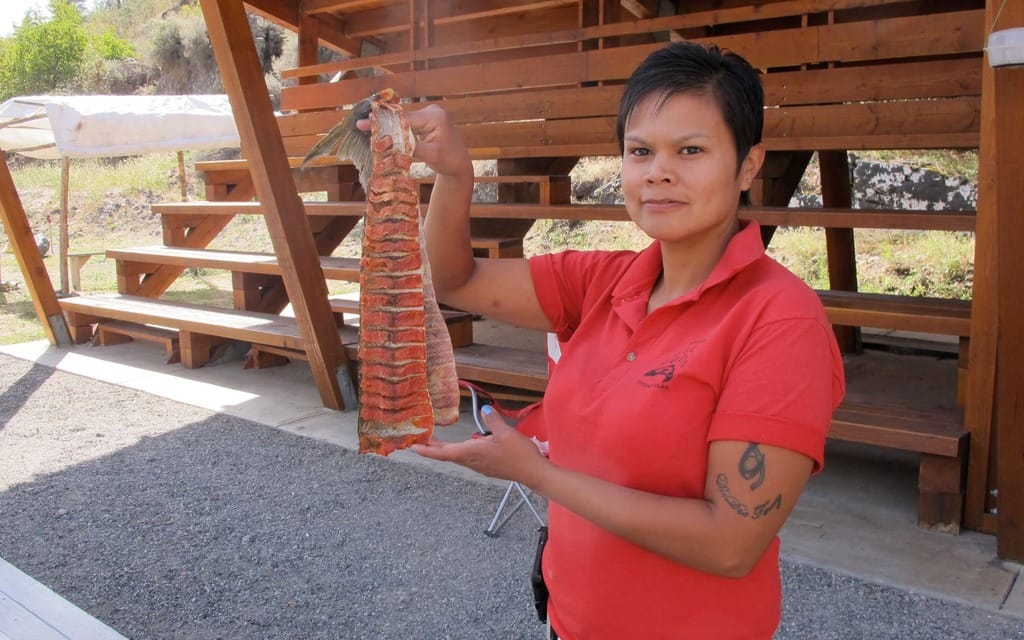 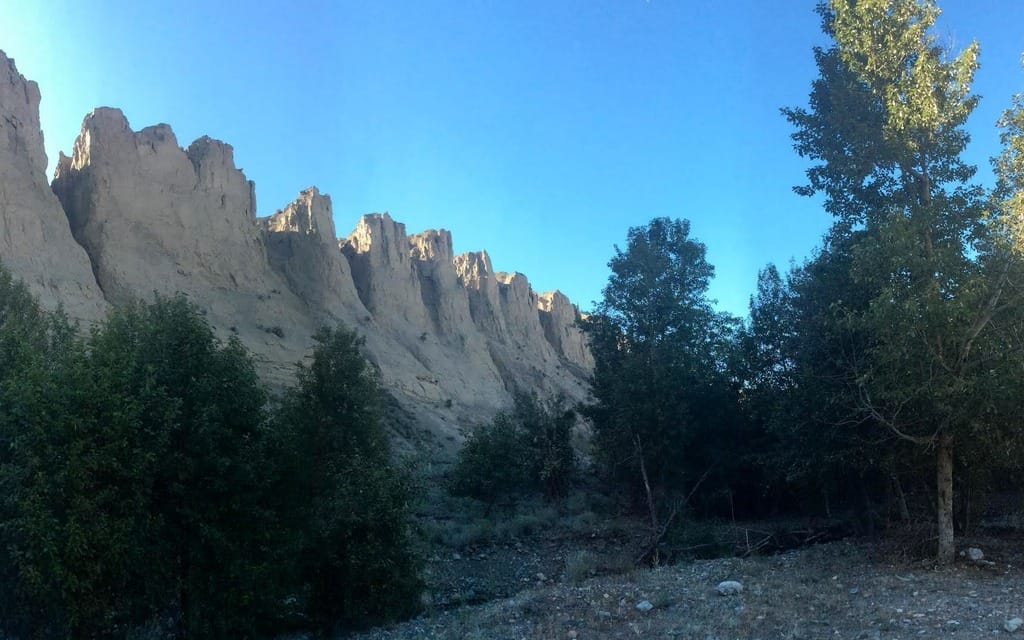 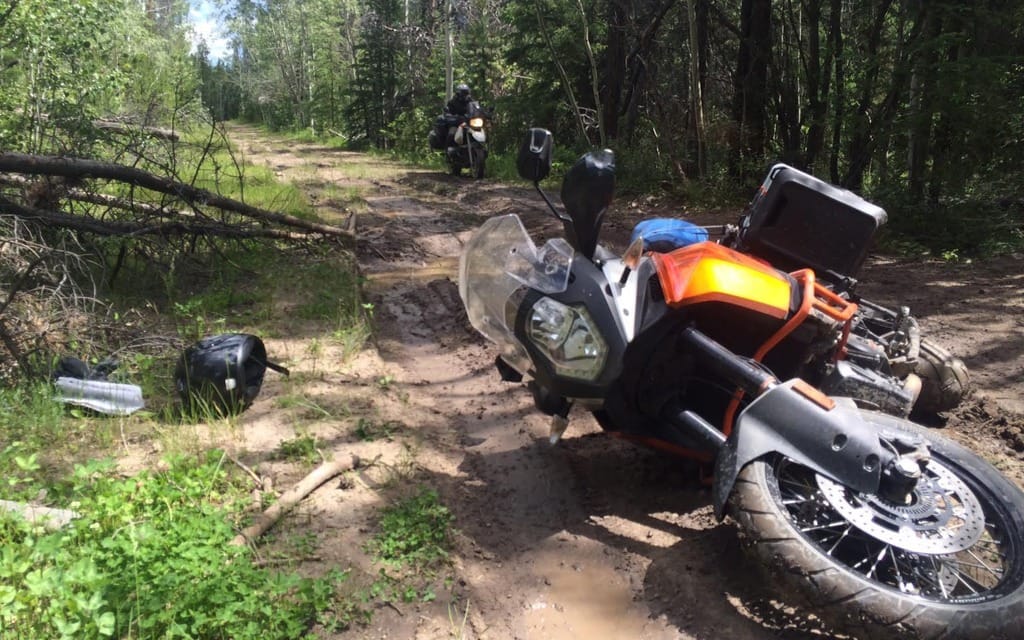 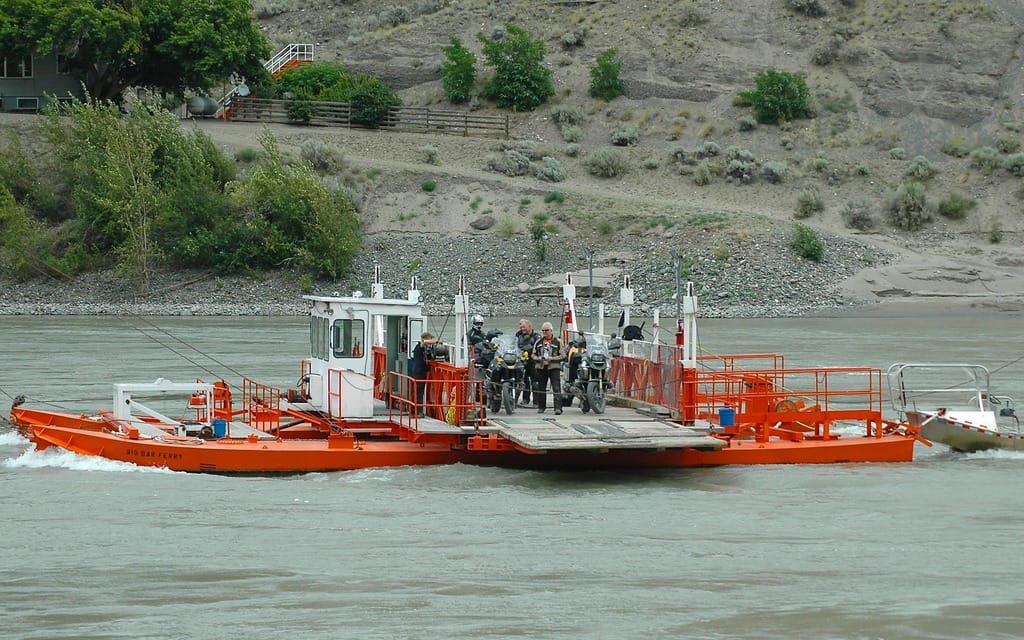 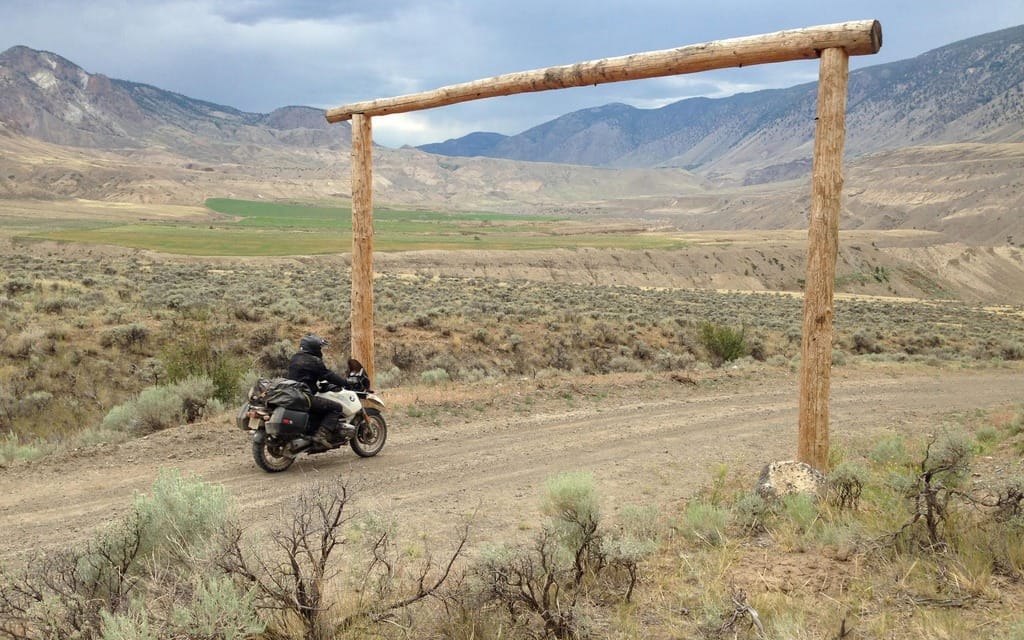 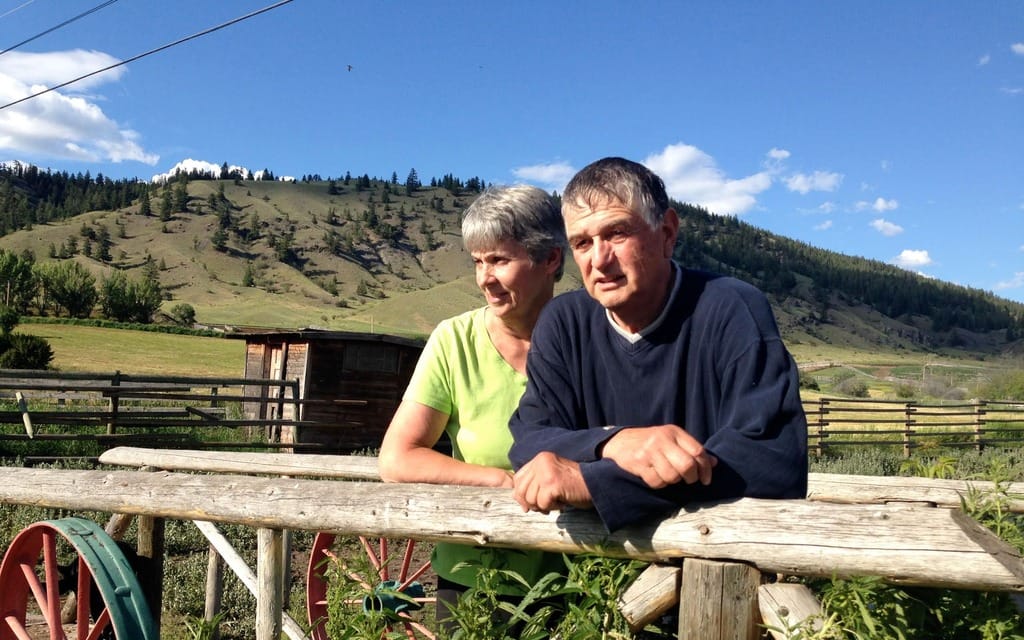 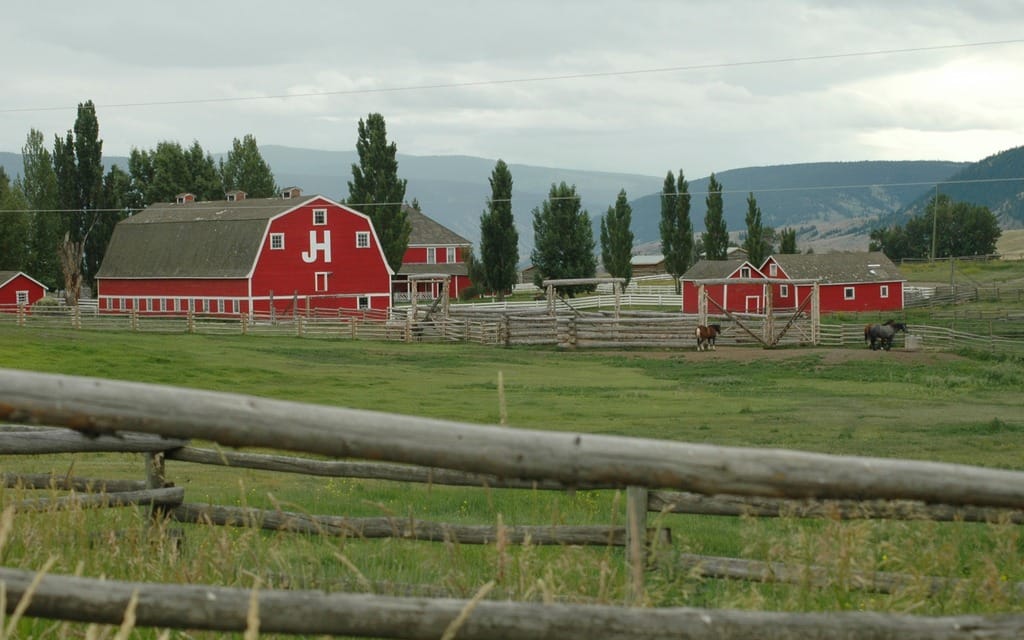 Beyond the back of beyond – part 1

In Uncharted Territory: a 2,500-kilometre off-road odyssey through B.C.’s backcountry
By Larry Pynn

Just two hours into my 2,500-kilometre odyssey through the gravel and dirt backroads of British Columbia perhaps my toughest challenge lies straight ahead. It’s a steep hill on the west side of Harrison Lake, featuring big loose rock and a motor vehicle inching along in front of me.

Worse yet, I’m a short guy on a big motorcycle — a loaner KTM 1190 Adventure — and still getting to know the bike. The vehicle ahead is one factor too many. I try to brake slowly, but the front wheel digs in, the bike goes down, and I tumble into the roadside shrubbery.

I am pissed, but physically unscathed. The bike has some tank scratches, and is angled awkwardly downhill and too heavy to lift. Gas is leaking onto the gravel. And no one’s around to help.

I wince at the irony. Several people asked to come on the expedition, but I turned them down because we’d never ridden together. My one trip companion — beefy Murray Comley, a proficient rider and all-around-handyman — needed last-minute repairs and has agreed to join me tomorrow, in the Fraser Canyon community of Lillooet.

So I wait. And wait. Fifteen minutes later, another vehicle creeps uphill towards me. Two Ukrainian men get out and help me pick up the bike and reattach one of the metal panniers. Two other vehicles are now honking at the top of the hill, anxious for us to move along. “Don’t worry about them,” says one of good Samaritans. I clamber onto the bike and proceed cautiously downhill, pulling over at the bottom to gather my thoughts in the shade of alder, red cedar, and bigleaf maple.

There are close to 50,000 kilometres of paved provincial highways in B.C., but more than 400,000 kilometres of gravel resource roads serving logging and mining, and oil and gas industries, as well as remote communities and far-and-wide residents. Collectively, they interlace the boot of the province’s backcountry.

This is a nine-day expedition carefully chosen to almost entirely avoid pavement and target some of the least-travelled, least-known gravel roads inh Canada’s most ecologically diverse province. Today’s roadside crash in loose gravel portends more adventure to come along a route mined with the unknown and fuelled by the excitement of uncharted territory.

Murray and I rode down the Baja peninsula in November 2015 — on a 1995 BMW R1100G and 2003 883 Harley Sportster, respectively. Every dusty Mexican backroad we passed only increased our desire to know what lay beyond. Our next adventure would be different. Murray installed knobby tires on the Beamer, and I got the sophisticated KTM Adventure — with street tires, yes, but still far better equipped than the Sportster for the rigours of rough roads.

My journey starts in the land of the Sasquatch a little east of Vancouver, the heavily logged forests around Harrison Lake that are also known to attract human knuckledraggers — young partygoers with off-road vehicles camping on Crown land along the lakeshore. The In-SHUCK-ch First Nation operates a campsite and hotsprings at Skookumchuck, but it is too hot and too early for me to stop. I continue up the eastern shoreline of Lillooet Lake to the aboriginal community of Mount Currie, then along a short stretch of pavement leading through the farming area of Pemberton.

Where the route through the Lillooet River Valley heads north and climbs, pavement turns to washboard gravel on the Hurley River Forest Service Road. The road improves and makes for a smooth evening ride — almost no traffic and stunning views of the Coast Mountains rising around me. A road sign warns that this is grizzly country, but the only signs of wildlife are a grouse and a family of Canada geese running and squawking wildly at my approach.

The road leads to Gold Bridge and Bralorne, historic gold-mining communities that give all the appearances of ghost towns. The Mines Motel and Sally’s Pub in Bralorne is closed and for sale for $500,000 after owner Bruce Simon was sentenced to four and a half years in jail for drug smuggling. The Gold Bridge Hotel is shut down too, with an asking price of $239,000. A deer feeding on the town’s grasses seems about the only resident.

I continue eastward past verdant wetlands bordered by wildflowers and bathed in golden light, and pull into a rustic campsite alongside Gun Creek on the north side of Carpenter Lake, a BC Hydro reservoir with exposed shoreline stumps. The glacial creek flows cold and fast and makes the perfect cooler for my beer, cradled by large rocks and lit by the glow of a campfire.

The next morning, two adventure bikers wave as they pass my campsite. The road east from Carpenter Lake climbs high above the Bridge River Valley and its forests of Douglas fir and ponderosa pine. I squeeze through rock canyons and navigate writhing turns offering little margin of error. The precariousness of the ride is reflected in a white cross remembering a 40-year-old woman’s tragic demise.

The landscape turns increasingly dry and craggy as I descend to the confluence of the blue Bridge River with the murky, silt-laden Fraser — B.C.’s greatest river, draining 233,000 square kilometres. St’át’imc aboriginals near Lillooet follow ancient traditions here, clinging like wet paper to shoreline rocks and using dipnets to harvest salmon during the spawning migrations. The fish are then hung from wooden racks and dried by the warm summer winds. Tourists can take walking tours or watch from a gravel parking lot while dining on fresh, pan-fried bannock.

I continue into Lillooet to dine at the Rugged Bean Cafe near the 4 Pines Motel — the most popular choice for motorcyclists — and wait for Murray. He arrives after a couple of hours with his usual complement of adventure stories. Turns out he couldn’t resist a side trip down a gravel route to the Fraser River near Carpenter Lake’s Terzaghi Dam. He, too, dumped his bike, making numerous attempts before getting it out. “This voice in my head is going, ‘I’m hot, sweating bullets, and my brand new clutch is smoking,'” he relates over a beer at the Reynolds Hotel. “‘You always do this to yourself.’”

Most people familiar with B.C.’s roads think of the Fraser Canyon as the well-travelled stretch of Highway 1 between Hope and Lytton, unaware that much more dramatic scenery lies upstream. You get a sense of it on paved Highway 12 from Lytton to Lillooet, skirting the edge of the Stein River wilderness. But you must continue north on the gravel West Pavilion Forest Service Road to get the full experience. Almost no one drives the route, which makes it a highlight of a motorcycle expedition.

We ride across the Bridge River as thunder clouds roil close by and climb a series of steep, tight switchbacks. Murray points to a section where you can observe vehicle tires going right over the edge. We are now entering the great area of the Fraser Canyon that is devoid of paved highways, railways, major powerlines — and, virtually, people.

This is ranch country, home to some of the largest cattle operations in North America, including the historic Gang Ranch, currently owned by Sheik Ibrahim Afandi of Saudi Arabia.

The Fraser Canyon has everything — aboriginal occupation spanning several millennia, European gold-rush history, and landscapes on a grand geologic scale. Ranchers are only the latest to call this land home, and their network of dirt roads defies any road map.

The West Pavilion road stays high. To get a more intimate sense of the canyon below, we take a spur road about an hour from the Bridge River marked “no through road” that corkscrews downhill for eight kilometres. We ride across sandy benchlands that once formed the bottom of the Fraser River and through vast stretches of bunchgrass and sagebrush, and nod at a few abandoned wood buildings on the shores of the Fraser.

It must be 35 degrees this June afternoon, an opportunity to bask in the dry heat of one of Canada’s greatest landscapes. With the coming of evening, swallows fill the skies like ticker tape, followed by night hawks and a canopy of stars unblemished by humanity’s neon glow.

The heat wave continues the next day as we return to the West Pavilion and continue northward, admiring the crop patterns on the farm fields below. Then the route drops steeply, one hair-pin turn after another on loose gravel that conjures up memories of Harrison Lake. It leads to the free cable Big Bar Reaction Ferry, which utilizes the river’s current as power to cross the Fraser. The operator is a crusty fellow who doesn’t want his name or image in the magazine. “That thing’s not on, is it?” he says of my helmet GoPro. When he says there is gas at Alkali Lake, I mention my research shows there is gas closer, at Dog Creek. That infuriates him. “With these fucking eyes,” he says, pointing with two fingers, “I can tell you they sell gas at Alkali Lake.” We humour him for the rest of the brief ferry ride, then continue northward to a T-intersection where I wait 10 minutes for Murray. He eventually shows up with a load of crap in his jacket. My crap — note pad, map book, water bottle — stuff that tumbled out because I didn’t fasten the left pannier, thereby continuing an unfortunate tradition started in Baja.

Just ahead is Big Bar Guest Ranch and an impromptu $18 lunch — pulled-pork sandwich, mushroom soup, home-baked cookies, and lemonade served from a Mason jar. The dude ranch used to be a popular destination with folks from Metro Vancouver, but took a nose dive under Danish foreign ownership. Bryan Golat bought the 40-hectare property along with horseback riding rights on nearby Crown land in 2012 and is rebuilding the business. “We took it from a bad situation,” he says. “Kind of scary the first year, but it’s going well.”

We’re on the western edge of the Cariboo, an area of wooded rolling hills and fishing lakes and mosquitoes that represents the B.C. equivalent to Ontario’s cottage country. We don’t stay for long. Our route soon swings back to the lip of the Fraser Canyon and a steady descent to a bridge connecting to provincial Churn Creek Protected Area, about 60 kilometres southwest of Williams Lake. The 36,750-hectare protected area is home to the former Empire Valley Ranch and continues to allow cattle grazing on some of the province’s finest grasslands, vast undulating slopes as tawny and rippling as a cougar pelt. Off-road motorcycling is restricted to protect the sensitive landscape.

We pick a rustic campsite near the creek’s confluence with Fraser, and chat with two young men and a woman from Prince George who’ve been running the river in a 4.5-metre 200-horsepower jet boat. Steve Shaw, a millwright and bear hunter, invites us to come along for a short spin and soon we’re rocketing upstream to the bridge. They’ve spotted a herd of California bighorn sheep just upstream and a grizzly bear by the Fraser just downstream, “Normally you find them in the higher country,” Shaw says. “It wanted to cool off by the water.”

The landscape has its own stories. Research at Dog Creek — where, yes, there is a gas station — suggests the Fraser drained northward to the Peace River and Arctic during the Pleistocene period ending almost 12,000 years ago. The Interior plateau then became covered by a thick sheet of ice, which melted and carved out a southerly route through the Fraser Canyon to the Pacific.

Tomorrow, we carve out our own route through B.C.’s famed Chilcotin country, with its cast of larger-than-life characters and more unpredictable challenges. Let the backroads journey of a lifetime continue.