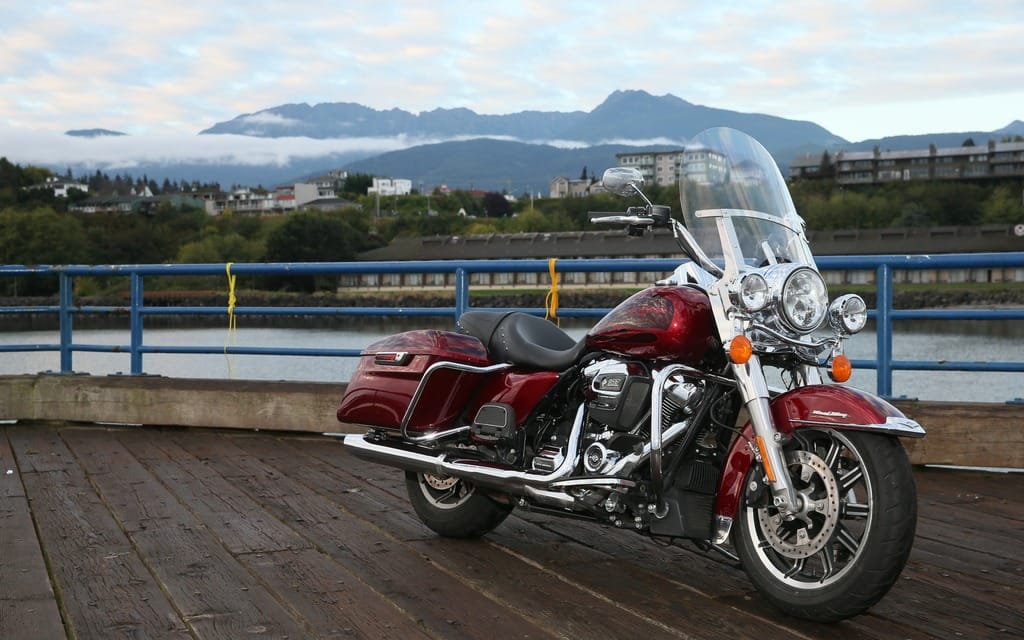 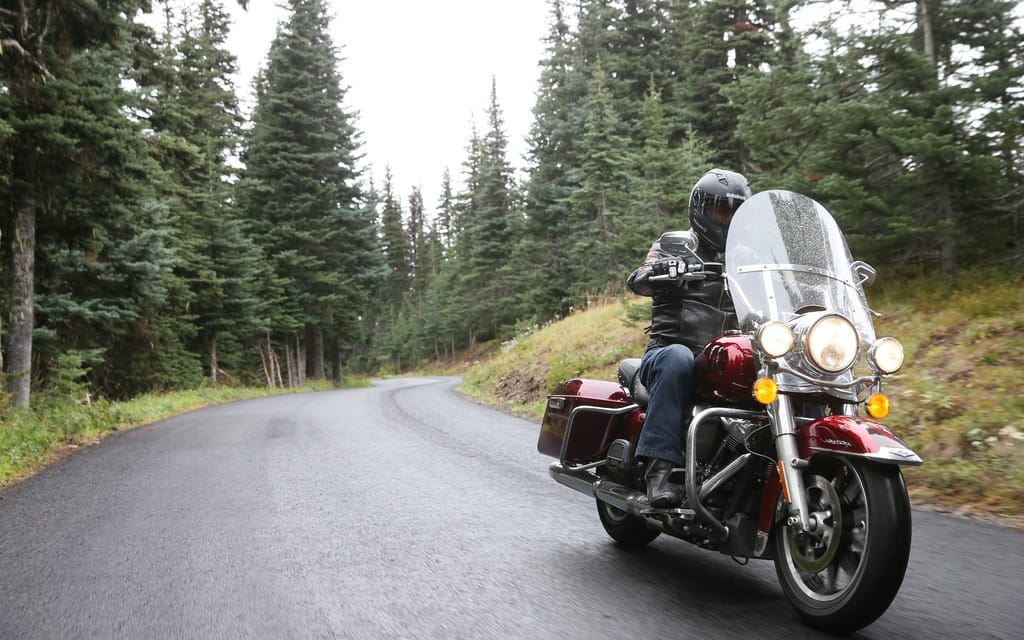 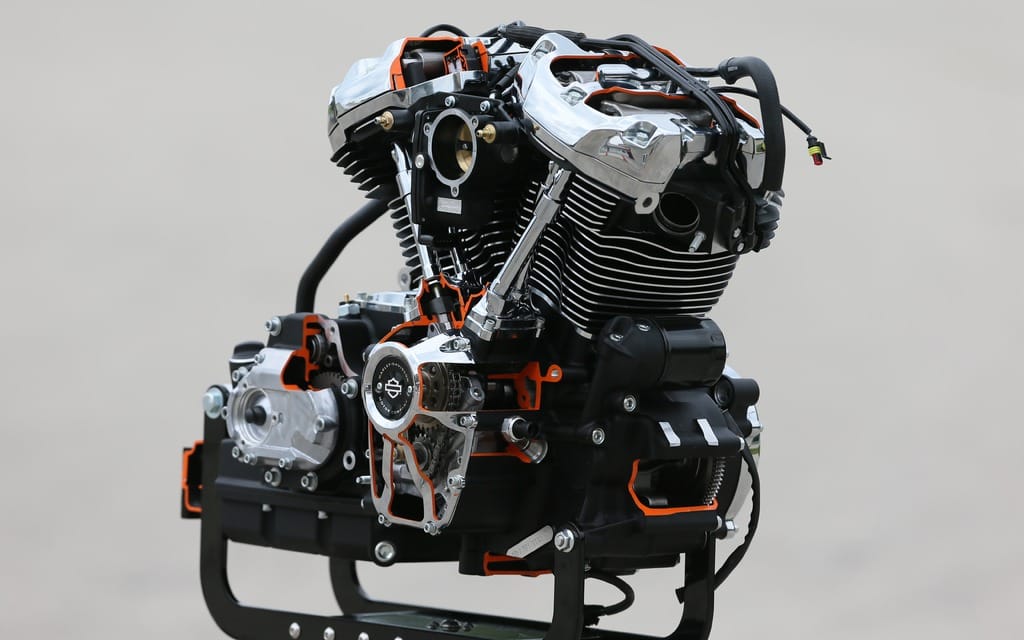 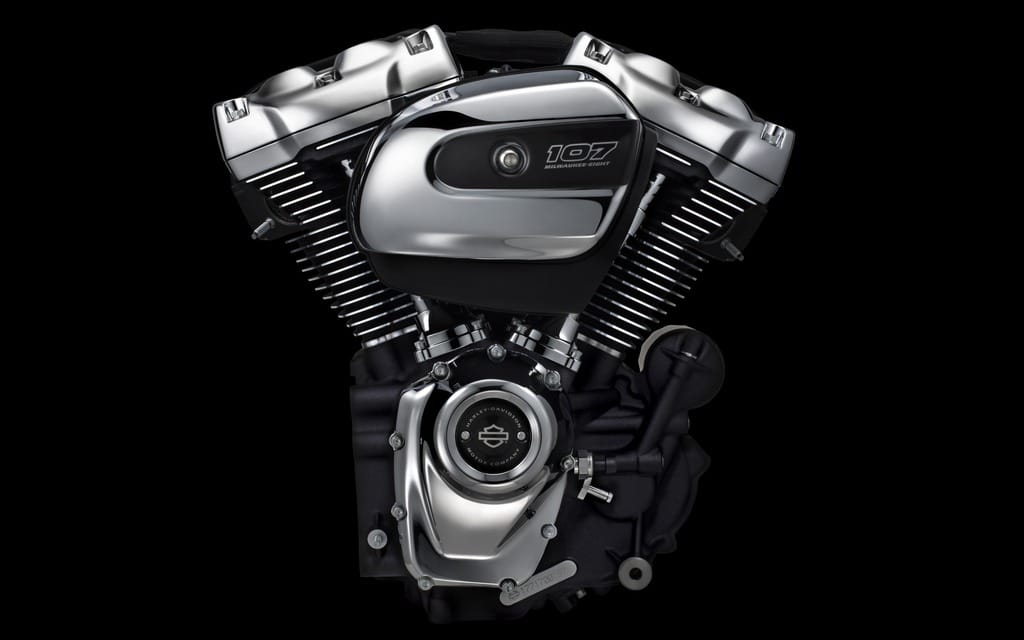 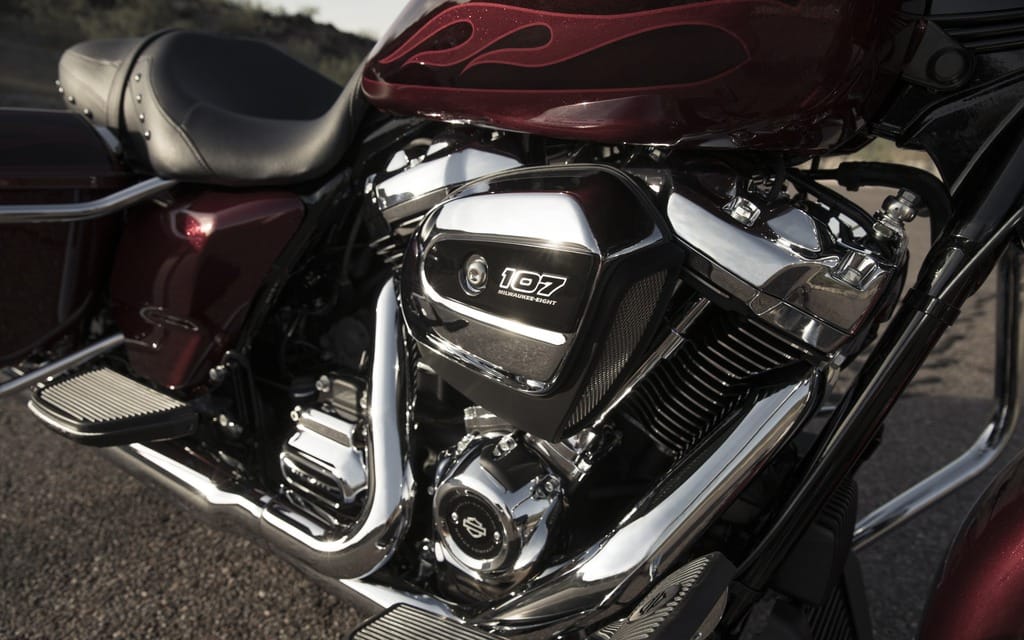 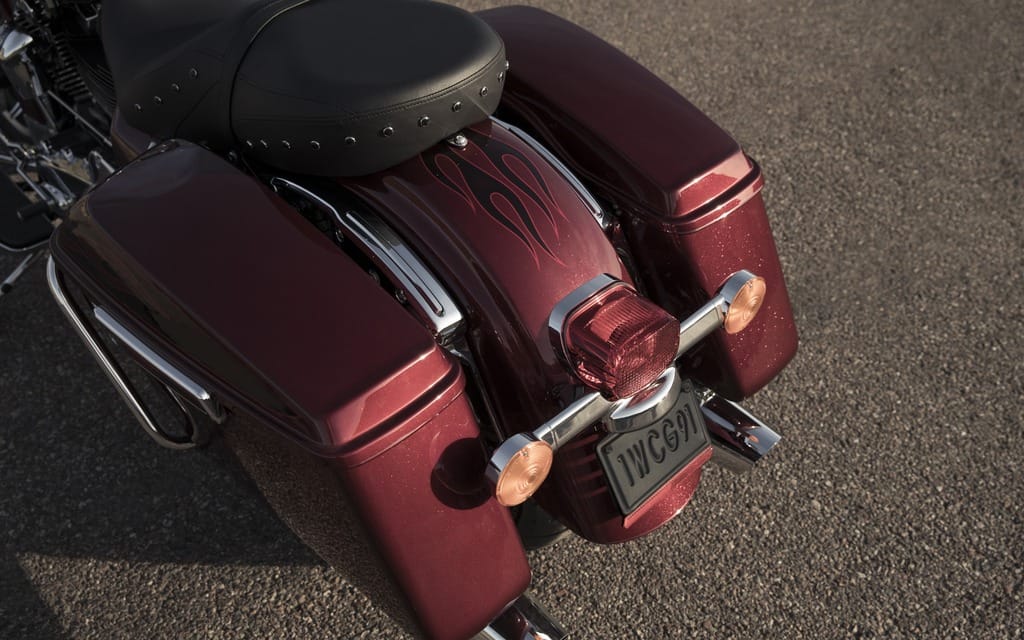 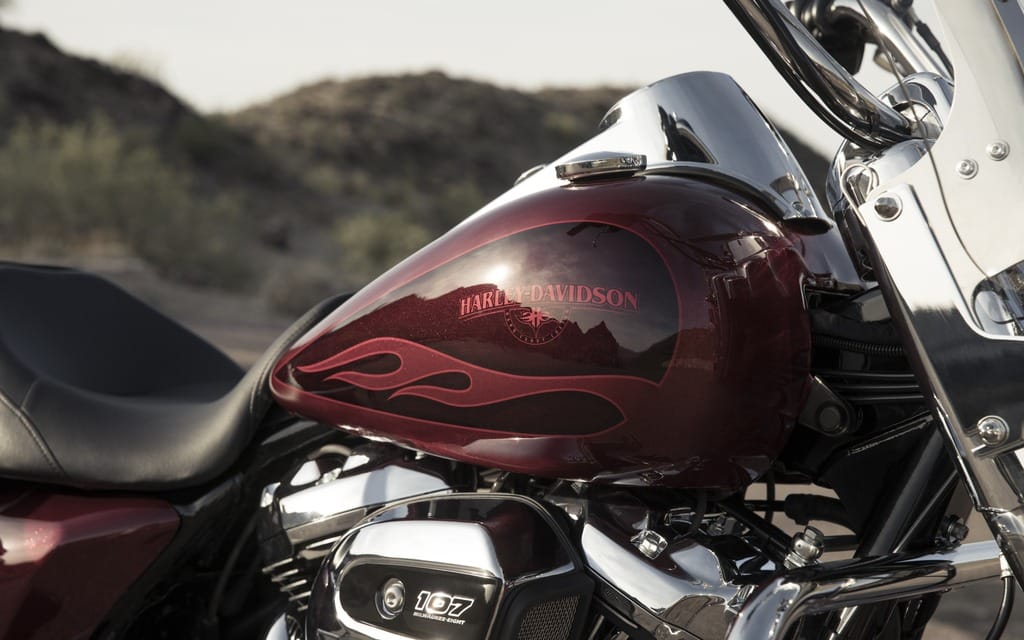 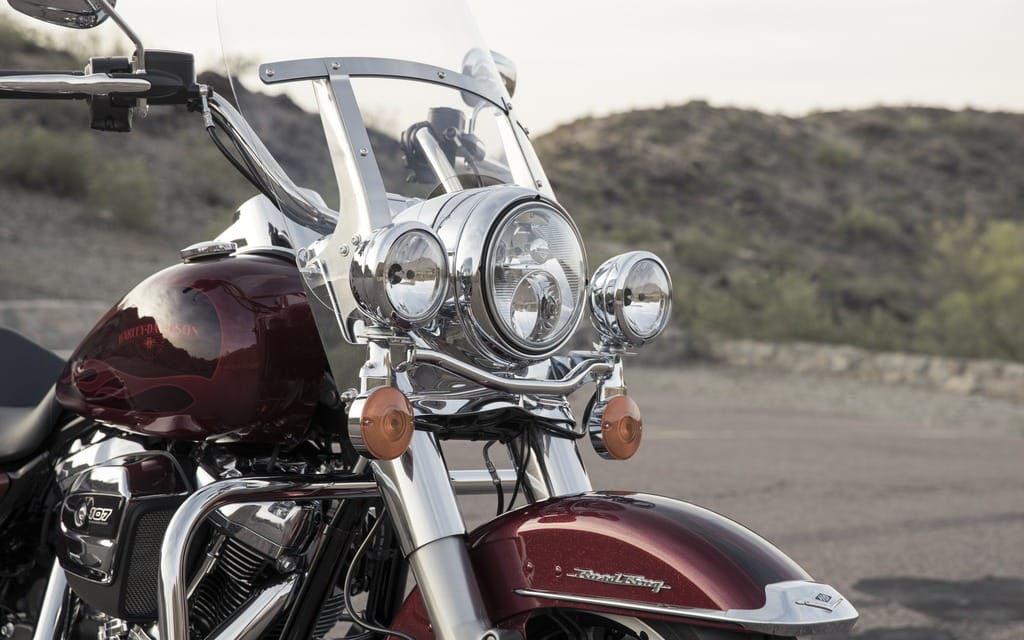 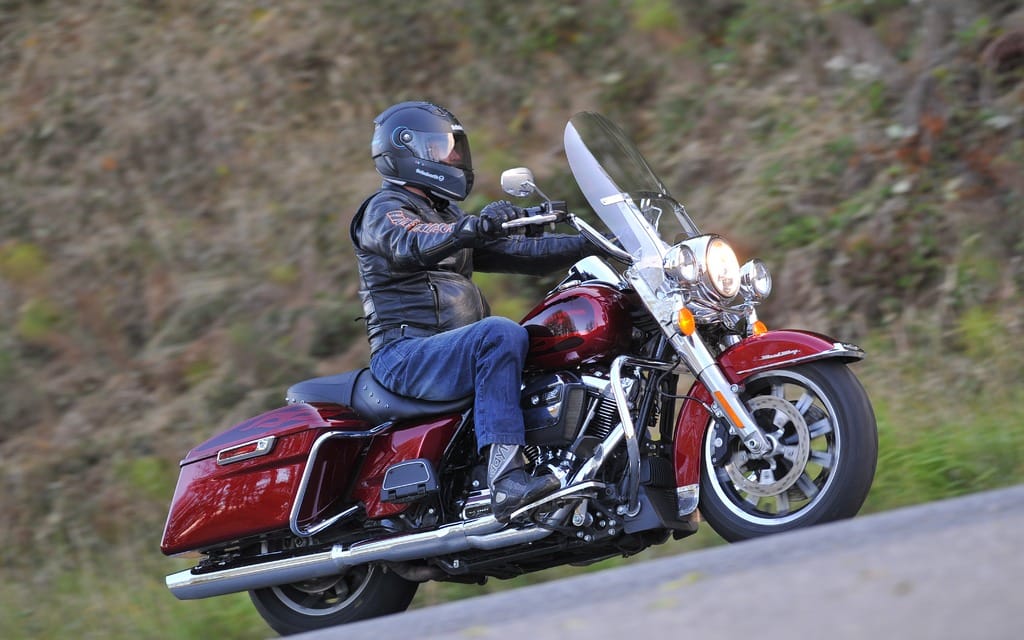 More valves, more power, and the song remains the same
Harley-Davidson introduces new engines about as often as the Maple Leafs make the play-offs, which is, as my Dave Keon–worshipping father laments, not very often. The current big twin, the Twin Cam, has been around since 1999 and before that the much-celebrated Evolution held sway for 15 long years. In other words, an all-new engine is big — nay, huge — news for hawg owners, one that one would think would be welcomed as rejuvenation.

Tradition, unfortunately, can easily morph into hidebound inflexibility, especially when your clientele is, as Harley’s is, a little past their prime. Thus has there been an undercurrent of skepticism — a wait-and-see attitude, if you will — amongst some of Harley’s “core” audience — again, that would be old and male — their grousing seemingly that any form of modernization would indubitably render America’s iconic V-twin less Harley. Indeed, their worry seems to be that modernity — seemingly synonymous with homogenization in the minds of Harley’s core — will somehow result in Harley building a “metric cruiser” (think all those Republicans south of the border referring to President Obama as “Kenyan” for an idea of how derogatory that sobriquet is meant to be).

Their worries are unfounded. Despite Harley’s desire to broaden its horizons — hence its “Outreach” program to bring women and minorities into is showrooms — it is still that precious “core” that rules Milwaukee. According to Paul James, Harley-Davidson’s director of product planning, virtually every decision that went into designing the new Milwaukee-Eight, every nuance to its design — internal or external — is focused on Milwaukee’s traditional audience.

“We focus-grouped both our traditional customers and they all said the same thing: While there were calls for ‘more power’ and a cooler [as in less calf-cooking engine heat] riding experience, the number one mandate that we heard was ‘I want the iconic Harley-Davidson look, sound and feel with any new design.’”

So diligently did Harley chase this look, sound and feel that most people other than hard-core Harley owners will find it hard to distinguish the new Milwaukee-Eight remake from the previous Twin Cam. The finning is all but identical, the trademark splayed pushrod tubes are still front and centre on the right side of the engine, and even the iconic rocker boxes aren’t that much different from the Twin Cam’s. Yes, if laid bare, all the new plumbing for oil- and water-cooling circuits — the Road King’s Milwaukee-Eight is oil-cooled, but those on touring models are liquid-cooled — are apparent. But, installed in the Harley of your choice, there’s barely anything to distinguish the new Milwaukee-Eight from its predecessor. Indeed, so assiduously did Harley-Davidson emulate its engines of yore that many of the assembled motojournalists had trouble distinguishing the 2016 Big Twins brought along as counterpoint for the new Eights.

That’s not say that Harley short-changed the upgrade. Beneath those eerily familiar rocker covers beats an all-new engine. Of course, there are the four valves in each of the two cylinders, arranged in the now classic low-included-valve-angle pentroof shape. What is at least semi-unique is the use of two spark plugs in each combustion chamber, both splayed to the outside of their respective intake valves. In the centre, where most pentroof designs have a single central spark plug, is a compression release, necessary when you’re trying to spin 107 — or 114 — cubic inches of big twin through 50-weight engine oil.

If the combustion chamber is straightforward, the valve actuation is anything but. As is blatantly obvious, the Eight is still an overhead valve design, each long pushrod still working against one rocker arm. Only this rocker arm actuates not one but two valves. Even more unusual says Alex Bozmoski, Harley’s chief powertrain engineer, is that the rocker arms offer no valve-lash adjustment. “We looked at shims and traditional bolt-and-locknut adjustment schemes,” said the Boz, “but decided instead to challenge our suppliers to hold their tolerances better.” He says their supplier reduced their manufacturing tolerances for the valves and by matching the valve’s expansion to the seat’s, “we were able to design a system that requires no valve-lash adjustments for the life of the engine.” The camshaft is all new as well, Harley returning to a four-lobe single cam design.

Harley doesn’t release official horsepower figures. But the American Environmental Protection Agency does, and according to some leaked testing documents the 107 cubic inch Milwaukee-Eight pumps out some 93 horsepower, the 114 cubic inch CVO version an even more impressive 101 ponies. If those are rear-wheel figures, they represent about a 25 percent increases over current Harley V-twins. The numbers are plausible because increased valve area — 50 percent more intake port area, says Bozmoski — will have more effect on high-rpm horsepower than low-end torque.

Certainly, the new engines feel far more powerful than the Twin Cams they replace. In fact, amongst traditional cruisers — not including outliers like Ducati’s Diavel, for instance — the Milwaukee-Eight, especially the aforementioned 114 cubic inch version, is the new performance king. Indeed, so eagerly does the Milwaukee-Eight rev, you’d swear that Ducati had a hand in the development of the four-valve head.

It completely changes the personality of the Road King. There’s a smidge more torque as Harley’s official figures indicate, but it’s really once the tach passes 3,500 rpm that those extra valves make their presence known. Fifty-five hundred rpm may not exactly be MotoGP territory, but for a Milwaukee big twin to eagerly spin that high is something new. Indeed, the Milwaukee-Eight is the first stock Harley big twin I can remember that feels eager to spin past its 5,500 rpm rev limiter.

Thanks to this wealth of high-rpm power, what was once a mere boulevardier borders on power cruiser. Snick off the Road King’s quick-release fork-mounted fairing and you won’t embarrass yourself in stoplight grands prix; pretty much anything with apehangers will be fair game. And it’s a barrel of fun to now be able to at least “play” with Gold Wing, Warrior and even sport bike riders, the familiar Milwaukee rumble completely camouflaging the Road King’s new identity of speed.

Speaking of the rumble that made Milwaukee famous, purists will be happy to know that Milwaukee’s off-beat syncopation remains undiluted. In fact, it’s been enhanced, says Bozmoski, claiming that thanks to tighter tolerances, lighter, zero-lash valves and the combination of oil-and-liquid cooling, noise from the engine’s internals has been greatly reduced. This has allowed engineers, says the Boz, some liberties in the exhaust department. Indeed, the Milwaukee-Eight’s exhaust note was more authoritative than a stock 2016 Twin Cam’s we had along for comparison, perhaps enough that maybe a few Harley owners — and this is probably wishful thinking — will eschew their “need” for straight pipes.

Power is not the Milwaukee-Eight’s sole substantive upgrade. Harley engines — indeed, most large-displacement, air-cooled twins — generate a lot of heat, especially at idle, the lack of cooling air flowing over the cylinder fins quickly cooking the rider’s legs at a stoplight. Harley has ingeniously solved — or at least greatly alleviated — the issue by first reducing the Milwaukee-Eight’s idle speed to 850 rpm (thus generating less heat) and then routing the rear exhaust pipe (the one that really bakes your lower right leg) even tighter to the engine routing all those BTUs away from weak flesh. What was once cause for asbestos-lined chaps is rendered as cool as a cucumber.

And the Milwaukee-Eight has a new balance shaft to reduce vibration. Theoretically, says Bozmoski, Harley could have completely eliminated the 45-degree V-twin’s vibration. Alas, according to product planner James, focus groups — largely composed of that, again, hidebound “core” audience — flatly rejected a glassy smooth idle, preferring their big twin to quake rhythmically like Harleys of yore. So the Milwaukee-Eight is turned for a 75 percent balance factor, smoothing out the idle enough to attract new buyers, but not enough to put off traditionalists.

No one minded, however, that the Milwaukee-Eight is glassy smooth at speed. It’s positively uncanny how something that shakes so much at 850 rpm is so completely unperturbed at 3,000. Indeed, the Milwaukee-Eight is one of the smoothest of cruiser V-twins at speed, even revving to its 5,500 rpm redline without blurring the mirrors. It’s a neat trick, this, allowing Milwaukee’s trademark shake, rattle and roll signature at idle and then having it rev almost as smoothly as a Gold Wing at speed.

There are, of course, other updates to the 2017 Road King. Primary among them is revised suspension. An emulsion rear shock with a more convenient twistgrip knob preload adjuster does a good job of controlling the Road King’s 76 mm of rear travel. There’s even a convenient preload “indicator” with a comprehensive guide in the owner’s manual to match springing to load.

But it’s the Showa Dual Bending Valve — essentially Harley’s version of a Race Tech “emulator” — front fork that is the biggest improvement in comfort and road-holding, with compression damping no longer locking up over large bumps. Not quite as compliant as a Wing’s front suspension, the new Showa damper is nonetheless a massive improvement over previous Harley forks.

Other tweaks include an alternator that can now pump out 24 amps even at idle; even at 850 rpm, the Milwaukee-Eight has enough juice to recharge battery, illuminate spotlamps and even heat an electrified vest. And Harley’s latest Boom! — their exclamation point, not mine — with up to four self-contained, Bluetooth-operated speakers is available on the 2017 Road King.

But it remains the Harley’s first new engine in 18 years that is the revolution in the making. More power and better heat management are upgrades Harley owners have been demanding for years. Still, there will be those who contend the Milwaukee-Eight’s smoother operation is less manly, that liquid-cooling and four-valve heads are modernization gone too far. They will grouse that sophistication, modernity and inclusion (as in all the conquered clientele that all this newfound refinement will bring to the brand) are anathema to the Harley experience.

Milwaukee-Eight-powered models are currently available in Harley-Davidson dealers. The 2017 Road King, with its new engine, costs $22,899, a modest $1,100 increase over the 2016 Twin Cam–powered model.