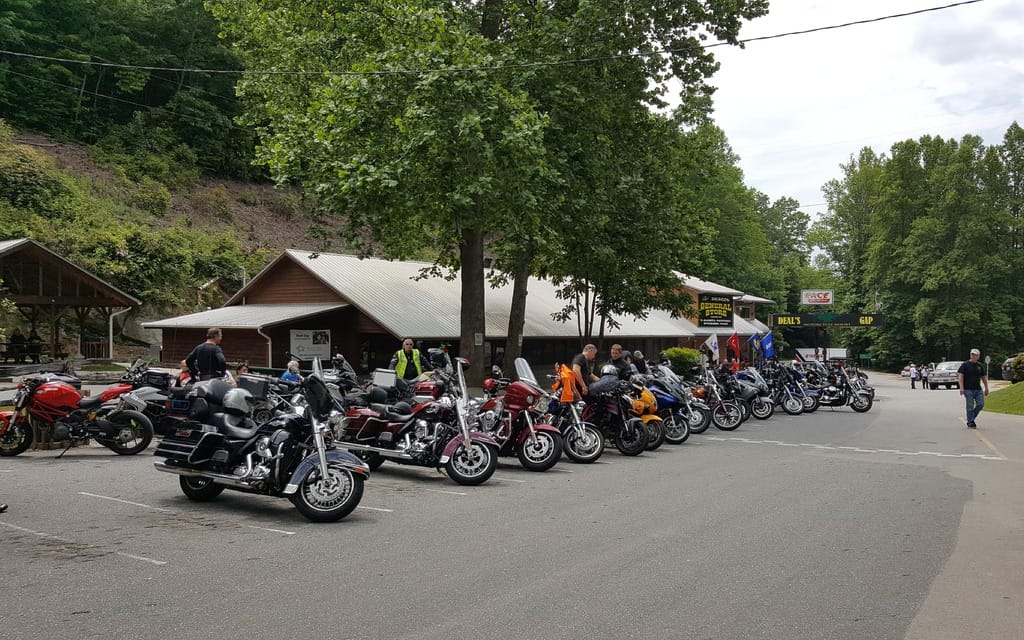 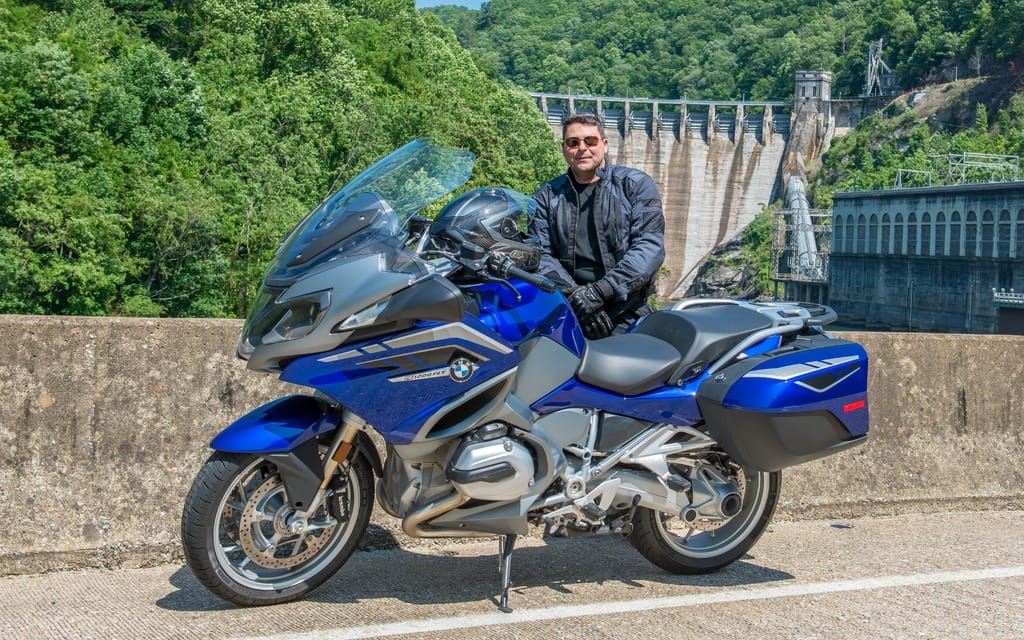 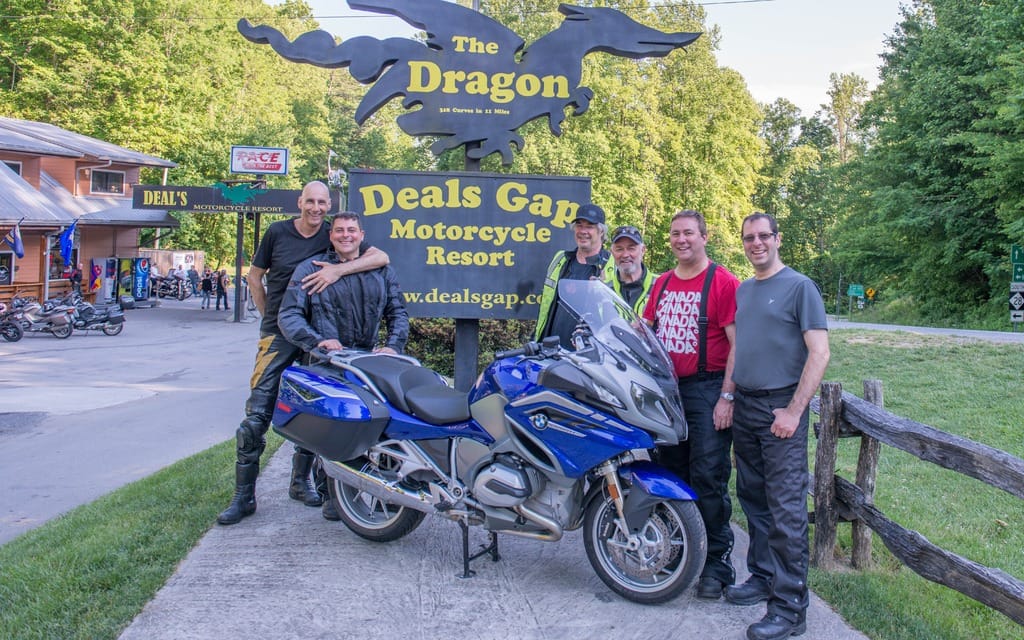 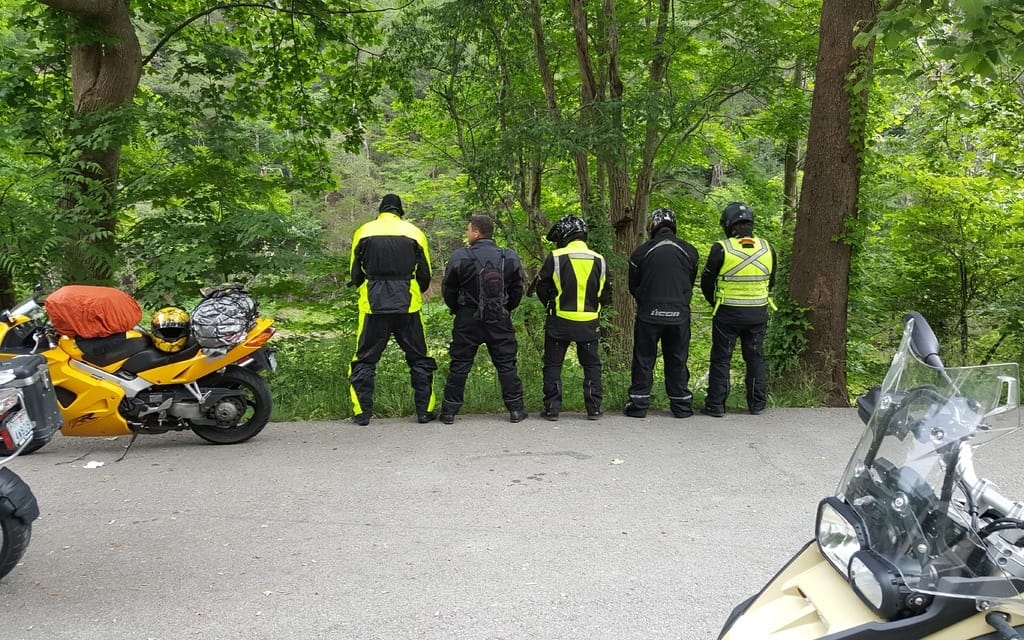 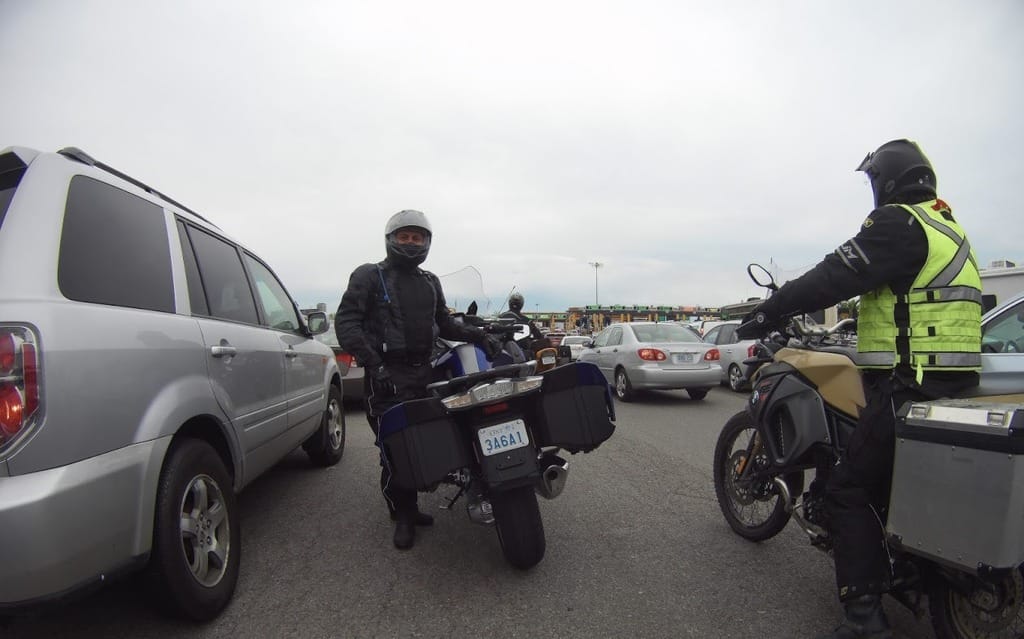 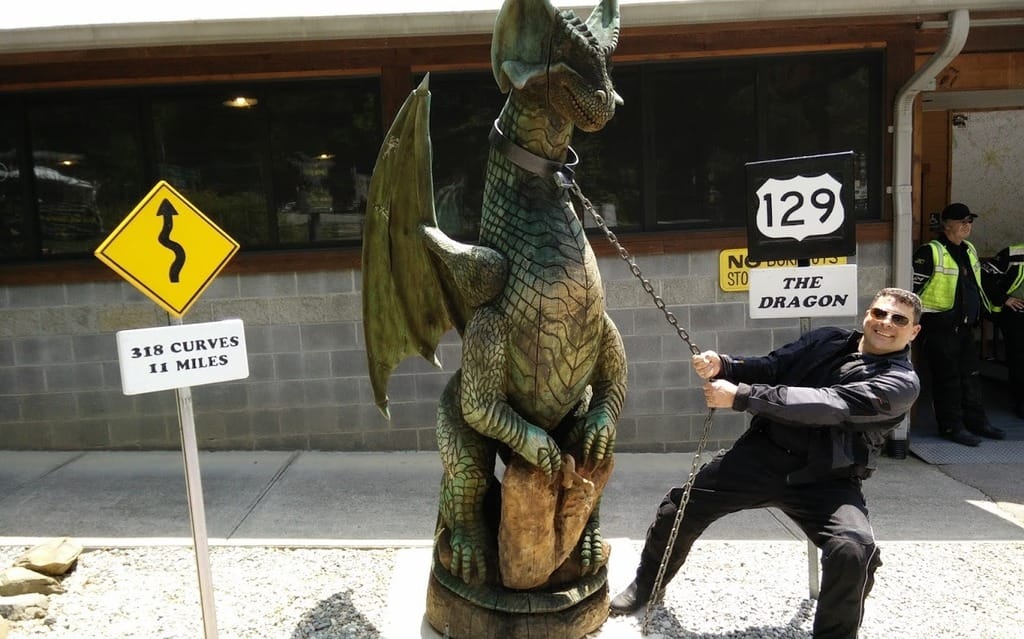 A deal he couldn’t refuse

A tour with friends leads to an unforgettable road
The night before we arrive at Deals Gap, I ask GS Mark what’s important to know about riding that stretch of road. “It’ll kill you,” he says, straight-faced. I ask again, and he answers the same way. Clearly, he means it.

I’m a bit terrified, but I do it. And it’s sensational. Deals Gap, also known as Tail of the Dragon, or Highway 129, is the tightest well-paved road I have ever seen, perfectly cambered to facilitate turn-in, lots of mid-corner grip, and double solid lines throughout—very narrow and serpent-like with bidirectional traffic and blind corners where anything can and does come at you, from large pickup trucks, sport cars and race bikes, to trikes and floorboard-scraping Harleys.

Through left and right turns, I hear myself say in mantra-like fashion “stay close to the white line on the right—keep clear of oncoming traffic.” With rock faces on one side and trees densely lining steep cliffs on the other, the terror of what could go wrong takes a long while to subside—and getting comfortable seems unwise. With 318 turns in 11 miles or just under 18 kilometres, I can understand doing the road at a moderate pace.

It is baffling how some get so serious about it, yet at the beginning of my third run on the next day, I glance at the RT’s clock at the bottom of the run and again at the second lookout up top, just out of curiosity. Fourteen minutes, and I still do not know which direction the next corner goes—a devilish little voice inside feels my time could easily come down by two minutes. Fortunately, a quiet yet wiser voice—reflecting what Arie and I had earlier said about having a family and needing to come home safely—prevailed.

This is the week of the May two-four weekend. Rewinding a bit now to January, George Reichert has been asking me to make the ride to Deals Gap with him for over a decade, and I’ve gracefully declined every time. But when chemo and radiation sessions are done and he asks again in the spring to either celebrate beating cancer or make this run as a last goodbye, it is an immediate yes. His results are pending and bucket-list plans for next phases of life are underway.

The idea of riding a motorcycle 20 hours over two days there and the same back to ride a dangerous road sounds absurd, especially since racing or track days to quench a need for speed provide considerable comparative safety. And highway droning for days seems a mind-numbing concept. Maybe put the bike in a trailer, fly down and ride once I’m there. But then why ride the Tail of the Dragon at all? I do not get it.

The best news here is that George just got a clean bill of health so almost none of these concerns matter. This trip is about celebration—beating cancer, new beginnings, and spending time with friends, new and old. And BMW’s R1200RT is chosen for the trip in my desire to do everything possible to minimize pain and optimize enjoyment.

With stark resemblance to automotive siblings, the R1200RT comes with a long goodies list that includes removable travel bags, cruise control, stereo, and GPS. It also relies on the proven air-cooled twin Boxer engine and Telelever front end as a base, similar to that which competed in CSBK’s Pro Thunder class a decade earlier. I am told this is the world’s best-selling sport-touring motorcycle, and I giggle on the insideit should work well over the long haul, as well as performing more aggressively when the roads call for it.

For George, this is a pilgrimage about camaraderie that happens spring and fall every year for the past 15. We have two and a half days to get there and fewer than two to return, with deliciously twisty roads and deep-fried anything including cheesecake as a bonus.. To start, we meet at a gas station along the highway at 8 a.m. Saturday morning with a plan to return Friday afternoon.

George arrives while I fuel up and gives me a hug, his happiness about us finally going on a bike trip together apparent. We enter Tim Hortons to meet up with his friends “Video” Mark Faulkner, “GS” Mark Brown, and Mike Bradley. Both Mike and Video Mark teach with George at the Humber College Motorcycle Rider Training School. To finish off our group of six, also meeting us is my friend Arie Pekar who has never done a long trip like this before.

The first four hours are spent droning along the highway in perfect staggered formation at about 15 percent over the posted limit. Shortly after crossing the Canada-U.S. border at Niagara Falls, we turn onto a more scenic and curvy route along I219. This is the beginning of a marathon ride with gas and pee stops scheduled every two hours, but Arie arrives last at each pause (made specifically to wait for him), pulls off his helmet for a chat and pee, and then in apparent oblivion is last to get going again. I apologize and although visibly irritated, George responds with “I’m just happy to be on this side of the dirt.”

Bad weather for much of the next six hours culminates with a torrential downpour and hail in brisk 10-degree weather. Visibility is so bad we stop for refuge at a deserted gas station where the others begin to express a subdued sort of manly bike envy. It is all good here. Adjustable heat in the seat and grips keep both my core and hands warm, while the adjustable and now completely upright windscreen together with large fairing keep the water off. My mind has been wandering freely together with changing landscapes. Stress is still prevalent, yet melting away.

Riding gear can also make all of the difference on a trip like this. Mine has three layers for cover, dryness, and warmth. Meanwhile, Arie and Video Mark end the first day in uncontrollable shivers, and over a long hot bath or shower presumably ponder the very distinctive difference between water resistant and waterproof. The next day, just after we pass a large sign that reads “Virginia is for Lovers,” temperatures come into the 20s so my warm inner layer gets zipped off and stored for resumed comfort. Meanwhile, matching GS riding buddies Mark and Mike begin to boil.

The big toll highways are opulent, well-maintained and curvy, while smaller ones that pass through towns and national forests are more scenic and tighter. The volume of rundown or deserted homes and people living in trailers with new pickups parked out front depicts surprisingly lower levels of income.

We stop at McDonald’s for lunch and to map out a route. Five Canadian health-conscious bikers order salads and the sixth is told they are sold out. In a land of super-sizing, we crack up. Then Video Mark says his back hurts, and all but yours truly offer up their portion of what turns out to be a mobile pharmacy. Getting old is a privilege, but one that apparently does not come without issues.

Arie recently had a kidney transplant and quickly discovers sitting at that angle for prolonged periods means needing to stop and pee every hour, or ideally more often—we had inadvertently been forcing him to contemplate peeing in his pants while riding. Sorry. So from the third day onward, he takes his own routes, meets up with us for food and sleep, and loves it. His pace is prohibitively slow, so I go with the group along the route documented in a now-legendary “Ballad of the Gap” video—Mark says a sequel based on this trip is coming.

The roads here are phenomenal, and attract considerable tourism—our hotel even has bike parking spots painted with water hose and cleaning supplies out front. And police seem fairly lax, particularly on roads known for their delight when travelled at speed. My personal favorite is the Cheratola Skyway which took three decades and US $100-million to create. It is an ideally twisty high-speed road with little to no traffic that carves along the tops and sides of mountains.

With the RT’s suspension set to hard and power delivery set to Dynamic, the rhythmic right-left with straights in between is a delight, but there is no time for scenery; the power shifter effortlessly allows for aggressive up and down changes through the gearbox with smooth precision as the engine blips and roars up high in delight. The BMW handles well, power comes on strong and smooth, and the geometry is good—the entire surface of the tire is well scrubbed in at both ends.

The thought of getting back to Canada quickly along major interstates still seems unpleasant, so to set the tone we start with one last blast along the Tail of the Dragon. Slow down, tweak all the electronics, and game on. Give ’er! Hours later I wonder how many minutes it took that time, and then let the insanity of the thought sink in and pass.

Riding through the Appalachians means all roads, big and small, are full of curves surrounded by a sea of rolling green treetops, as well as the occasional river followed or crossed. The fresh scent of spring and an almost meditative state makes time almost stand still as we ride in formation, yet hours go by between fuel stops. At one stop near the end, Mark and I reflect on the pros and cons of having a stereo, and agree that one of the best things about riding is in not talking to anybody. With that, I tell him it is nice not talking to him, put down the visor, and with grins on both ends we are off again for the next stint.

I have a much better appreciation for how or why people travel long distances together in lines of staggered bikes now. There is something about being in your own head yet in caring company that gives a sense of belonging and self-discovery that is better experienced than described. And with a motorcycle like BMW’s R1200RT, I have no idea why anybody would want to trailer their bikes down.

Thanks George. That was a blast.