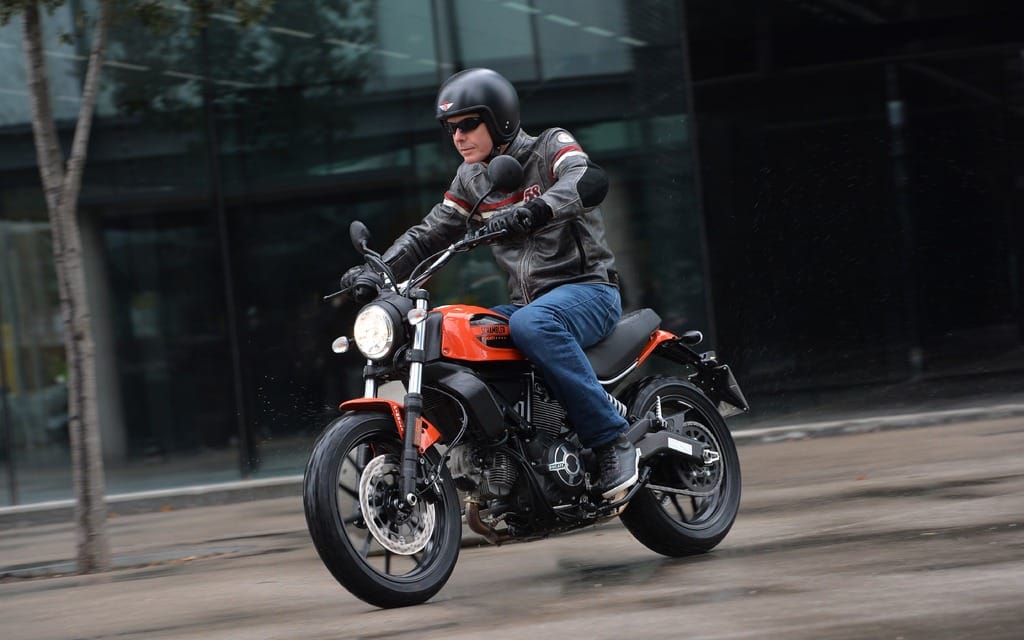 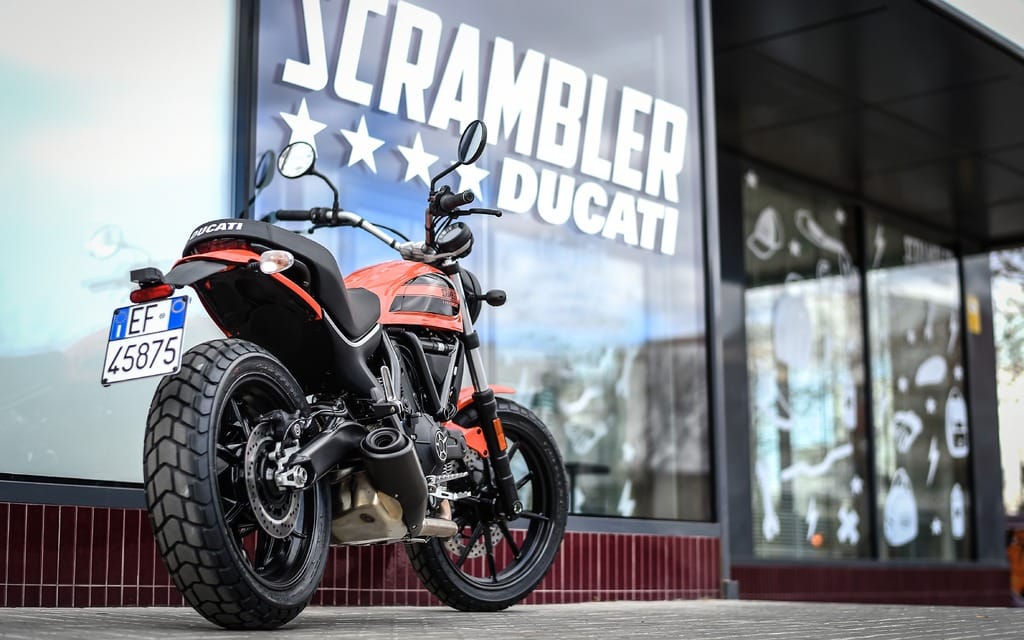 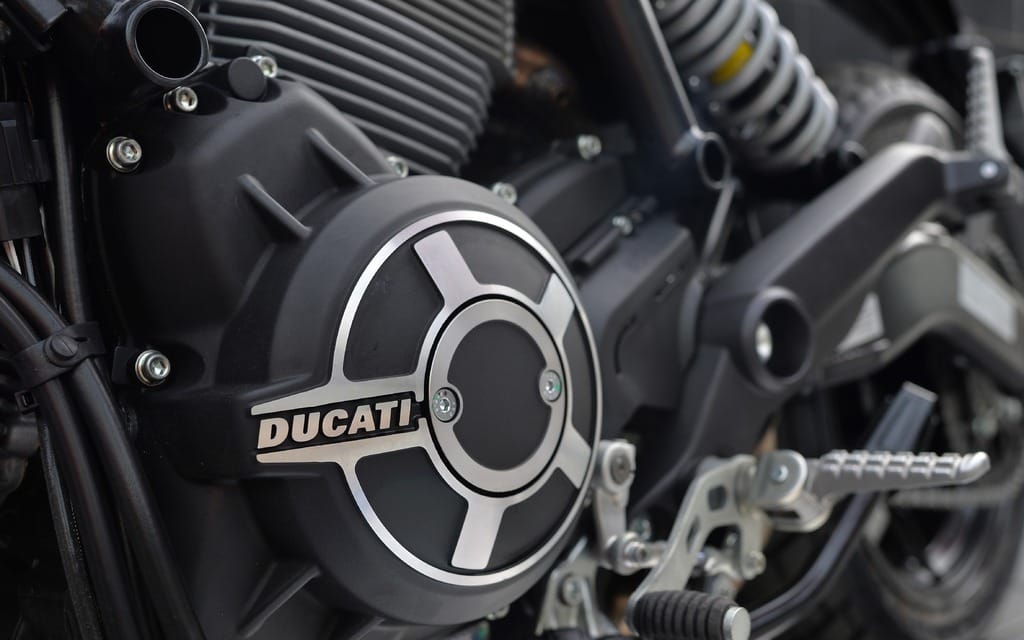 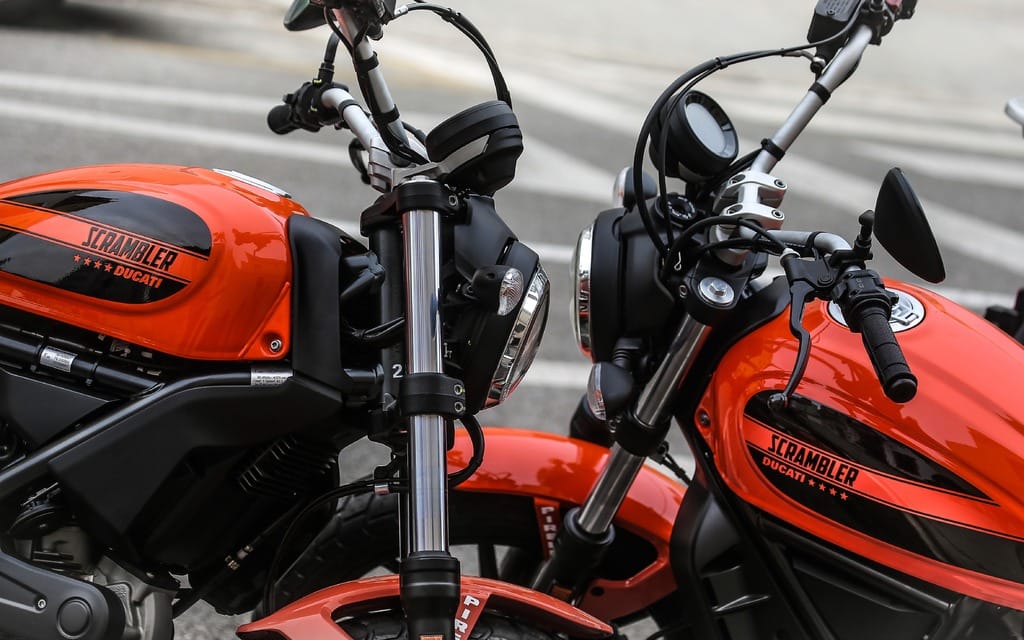 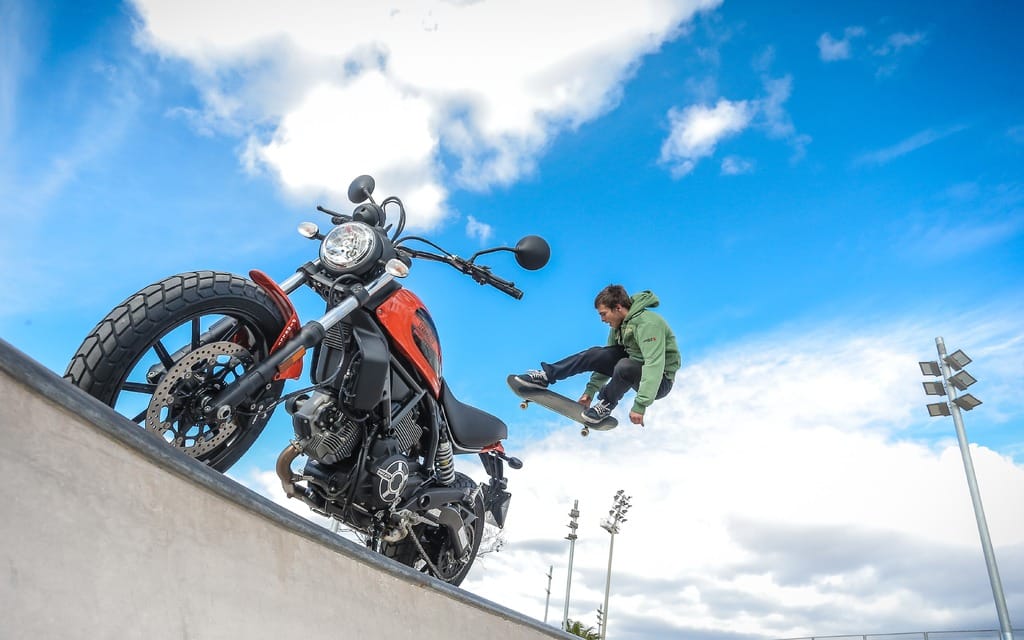 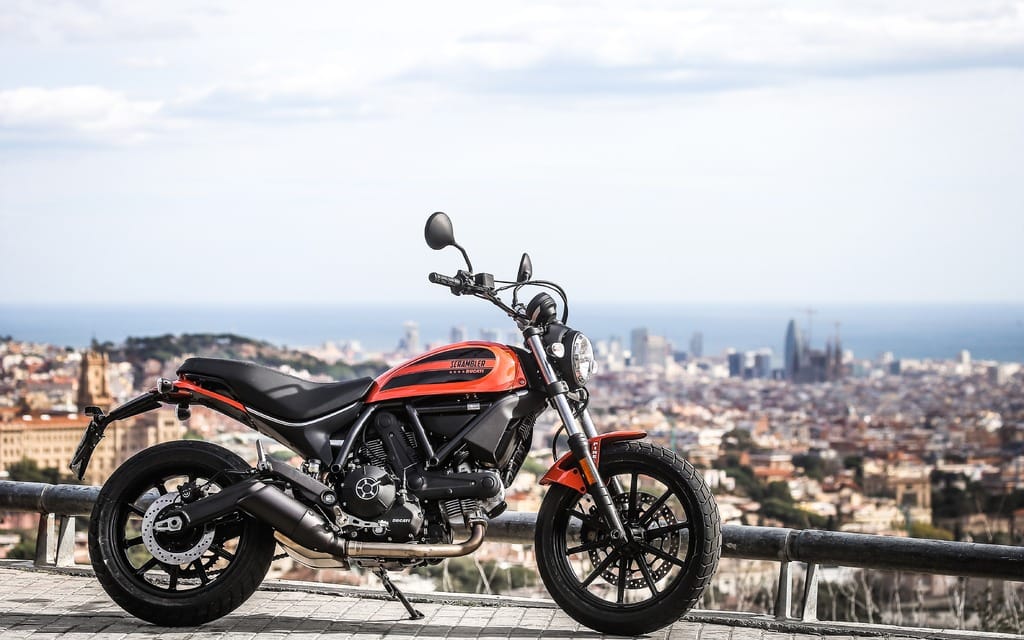 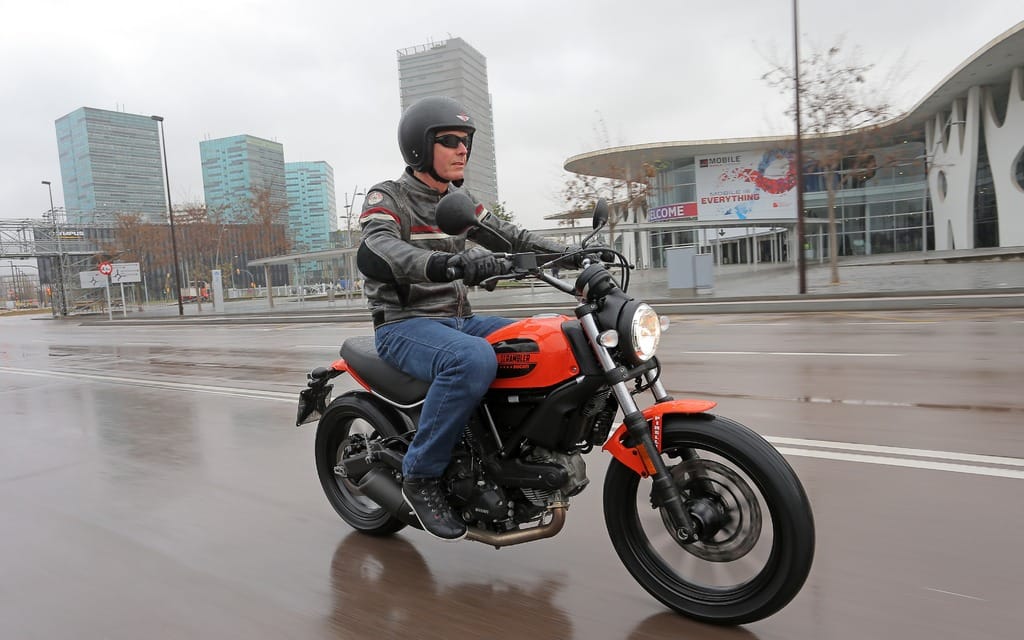 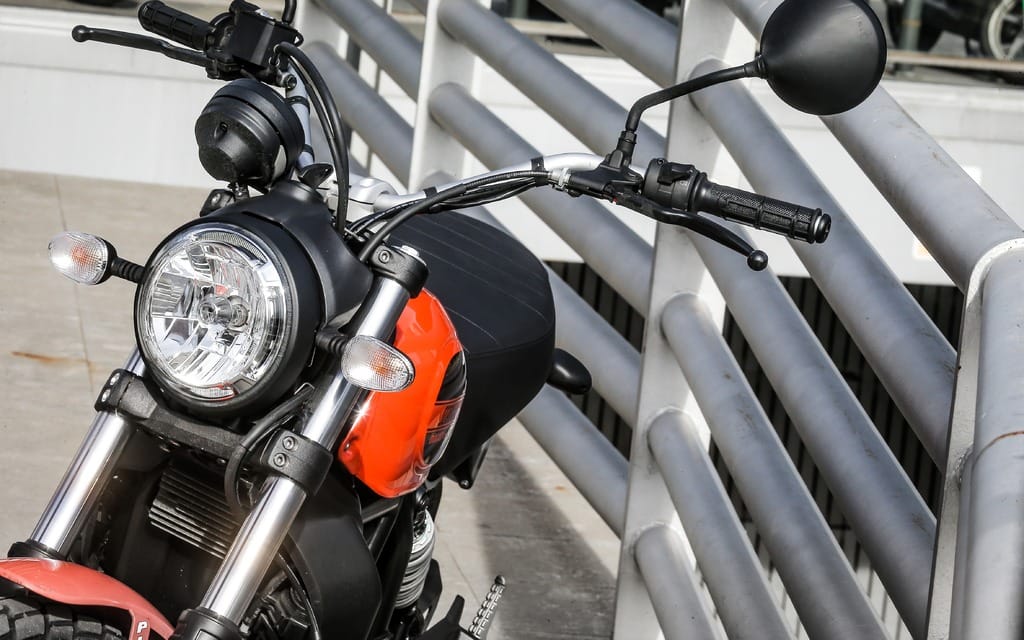 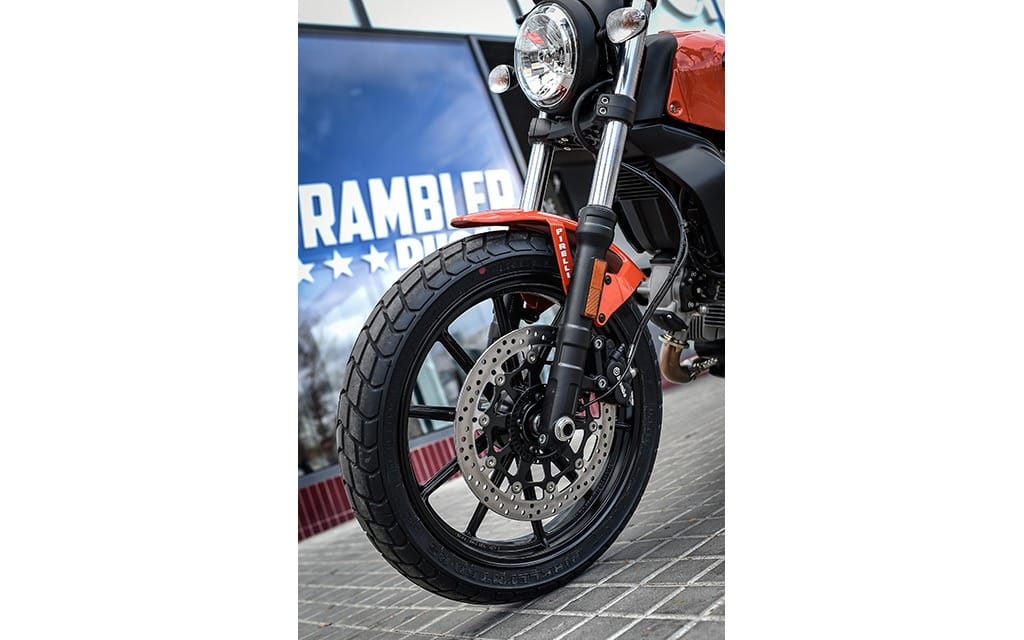 The Scrambler has been a big success for Ducati, selling more than 16,000 units last year and giving the Italian firm its first ever top-10 hit in the global sales chart of over-500 cc bikes. But with a typical buyer’s age in the mid-30s, the 803 cc V-twin could hardly be said to have attracted hordes of the young riders that Ducati regards as vital to its long-term future.

Hence this latest, similarly styled but less powerful and less expensive addition to the Scrambler family, whose promo video shows photogenic 20-somethings skateboarding, throwing popcorn at each other and riding the new bike, occasionally no-handed. Just like the cool kids doubtless did back in 1962, when the original Scrambler was introduced—as a 250 cc, 17 bhp single that was produced for the U.S. market and cost just $669.

This time around the engine is a V-twin with capacity of 399 cc, to suit the licence-class limit in some countries. It uses some bottom-end parts from the bigger Scrambler and makes a maximum of 41 bhp, well inside Europe’s A2 class max of 47 bhp. The rest of the bike follows the Scrambler layout, sharing its steel frame but with a new steel swing-arm and softened suspension, including right-way-up Showa forks instead of upside-down Kayabas.

With an unchanged, high-barred riding position, the Sixty2 is pretty much a softer, even more rider-friendly Scrambler in every way. After I’d set off from the launch base in central Barcelona it immediately seemed agile and easy to ride, helped by gentle low-rev power delivery and a light and responsive chassis.

The unchanged and fairly low (790 mm) seat helped most riders get both feet on the ground, and the wide bars gave plenty of leverage for dodging the traffic. (There are 20 mm lower or higher seats available as an accessory.) Throttle response was smoother than the bigger Scrambler’s but not quite flawless, with just a hint of snatchiness at typical town speeds.

Out of town the engine felt distinctly flat at lower revs, before perking up with about 6000 rpm showing on the slightly hard-to-read tacho bar that runs around the bottom of the round digital speedo unit. From that point the Sixty2 was notably more lively, accelerating at a decent rate with the help of a sweet-shifting six-speed gearbox.

Using the performance required plenty of revs, but at least the Ducati remained smooth through most of the range, before a slight buzz came through the footrests approaching the 10,000 rpm redline. At a more restrained 110 km/h, well short of the top speed of about 160 km/h, the only real discomfort was from the wind-blown riding position.

Chassis performance was reasonable, especially on a mostly damp Barcelona day that didn’t encourage aggressive cornering. The softened suspension gave a supple ride and was fairly well damped, but struggled slightly on some tarmac ripples. The chunky rear Pirelli MT60 is narrower—a 160- compared to a 180-section tire—but gripped well enough.

This smaller-engined Scrambler will doubtless handle fine for the relatively inexperienced riders that it’s aimed at. Same goes for its braking, although the 320 mm front Brembo disc is smaller than the 803 cc Scrambler’s and gripped by a twin- instead of four-piston radial caliper. There was a reasonable amount of stopping power, backed by an ABS system that cut in reliably when I braked hard on the slippery surface.

The Sixty2 should also be reasonably practical, although I didn’t find the seat as comfortable as its generous size suggested it would be. A pillion is quite well treated, with a broad bit to sit on plus hand-holds below the seat. What isn’t below the seat is the bigger model’s USB socket, which has to be bought as an accessory. The Sixty2 also saves costs by having a simpler tank, finished in orange, grey or black and without detachable side sections. This brings the bonus of a slightly bigger, 14-litre capacity that should boost most riders’ typical range to well over 200 km.

That tank might make customizing slightly less easy but the Sixty2 almost matches the bigger model’s retro look, and offers a similar opportunity to add style via the long list of accessories. Its main drawback is simply that despite its reduced engine capacity it’s still a desmo V-twin, built in Bologna. So it can’t be produced much less expensively than the bigger Scrambler—or sold for a remotely 1962-style price.

In most markets it’s only around 10 percent less expensive than the cheapest Scrambler Icon, which provides more go (even when restricted for learner use). Retro-themed alternatives including Harley’s Street 750 and Yamaha’s XSR700 are cheaper than the Sixty2 while offering their own brand of classic cool, while capable A2-class roadsters such as Honda’s revamped CB500F are considerably less expensive.

The Sixty2 succeeds in lowering the entry price to Scrambler ownership. It’s an admirably rider-friendly machine whose all-around performance will suit many novices just fine. But despite the skateboard vibe its appeal might fade with age and experience. Whether it offers sufficient value to draw young riders to the fabled Land of Joy, in the face of such strong opposition, remains to be seen.

Federico Sabbioni, Ducati Head of Vehicle Product Management
“We have seen from our market research that our customers are getting older every year. We have an opportunity that we must not miss to think what to do to keep the interest in motorbikes in young people at a certain level, not to let it go down.

“With the Sixty2 it’s a balance between trying to offer a really cheap product, which is something we don’t want to do, and trying to interest young riders. Clearly someone 20 years old will have trouble to buy something which costs €7600 in Italy. But it’s a first step; an effort in that direction. And there is a world behind this bike; a lifestyle. Coupled with the accessibility of a 400 cc displacement, we hope this will stimulate the interest of younger people.

“Would we go further and make a single-cylinder Scrambler? No. It would weaken our brand to make a smaller bike so we don’t think we will go lower than this displacement. And the V-twin remains the core of our range. Inspiration from the past is the key concept of the Scrambler family but we don’t want to copy the old bike, we want to reinterpret it with contemporary technology.

“We tried to maintain the style and values of the old Scrambler, but with a twin not a single cylinder. On the other hand, we could develop a larger-engined model. But maybe it will be better to stretch the concept in a lateral direction, by making the different Scrambler models more distinct.”