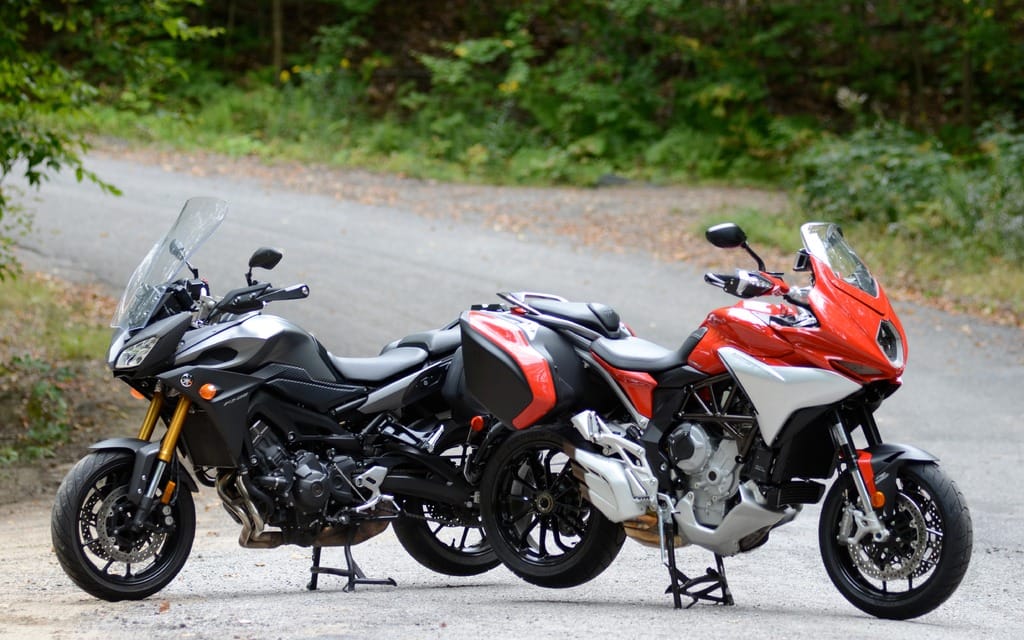 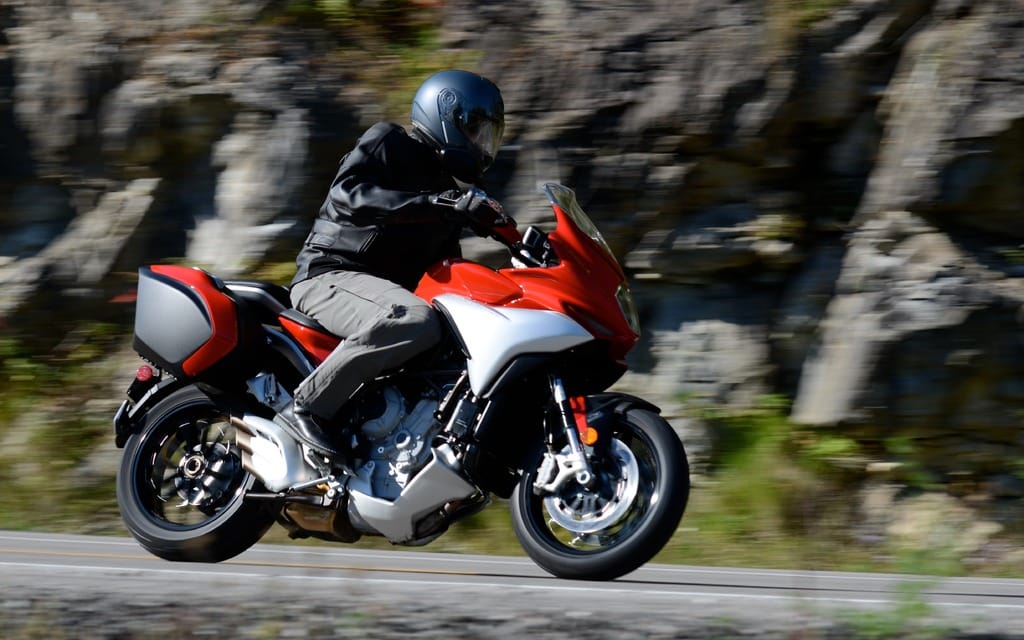 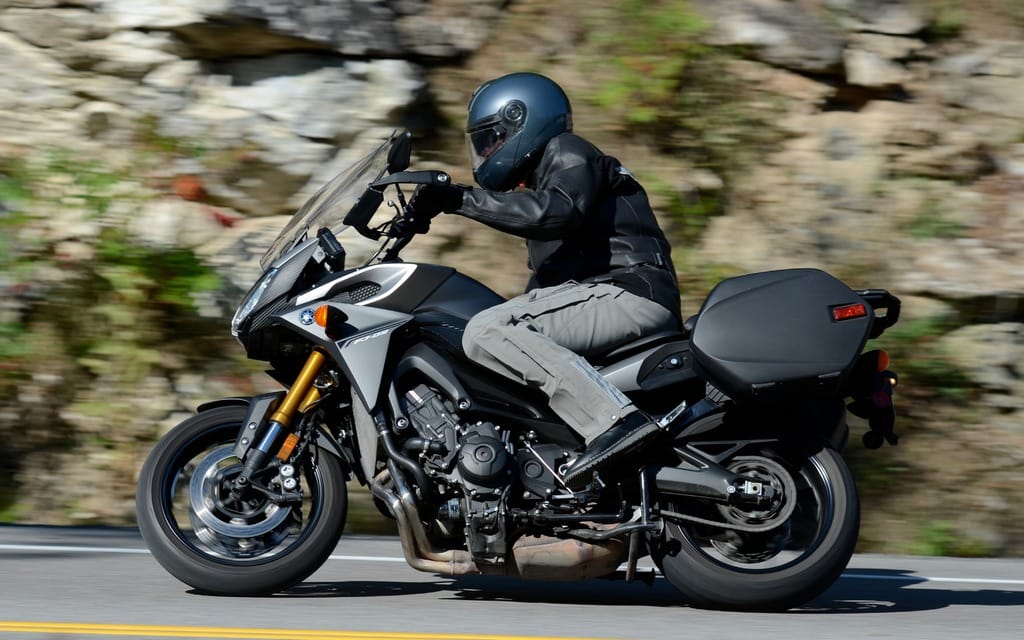 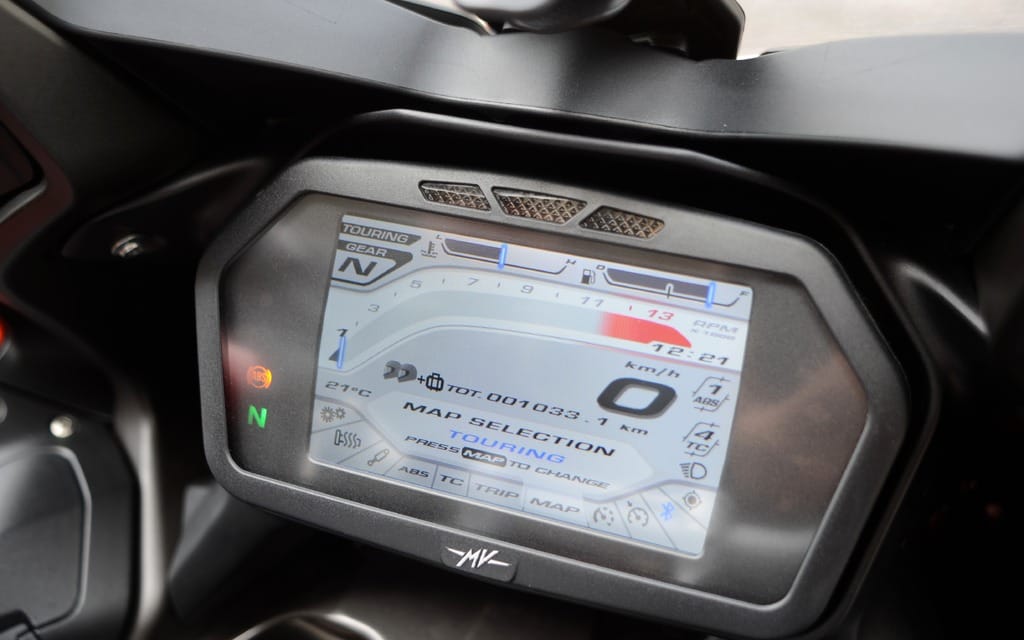 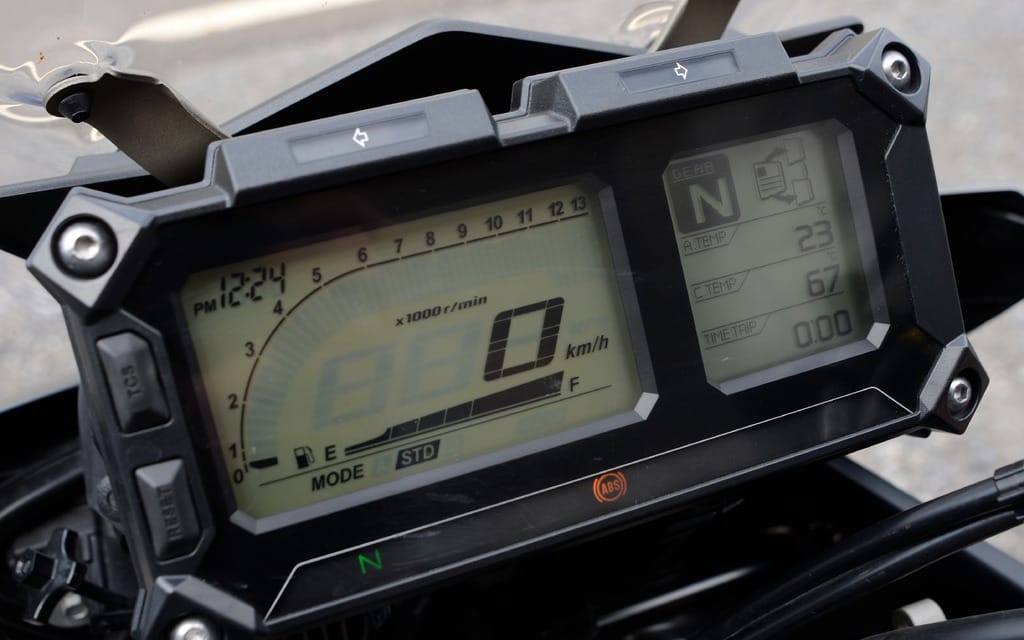 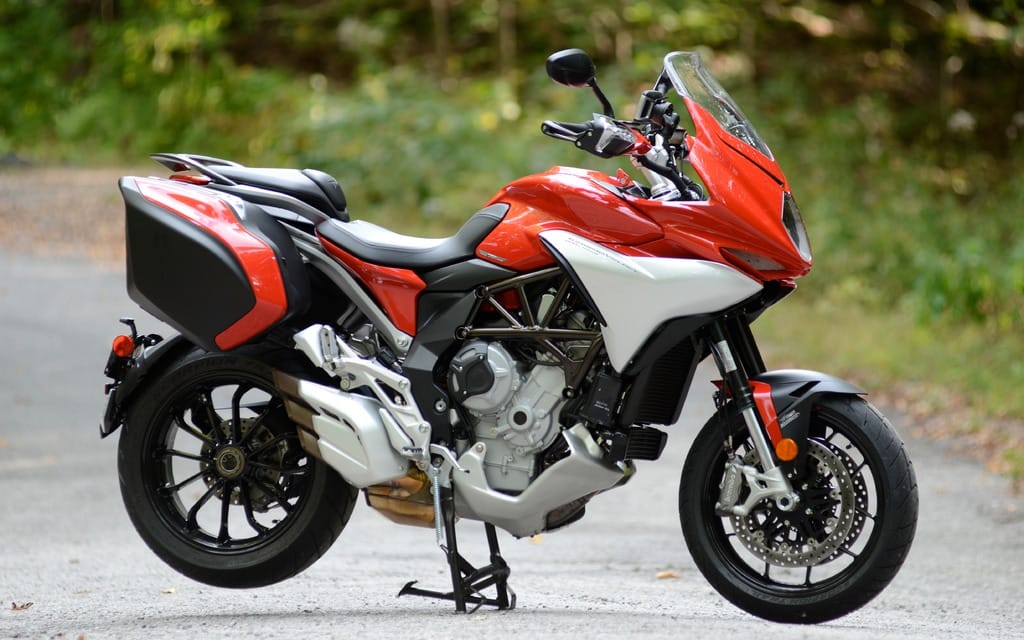 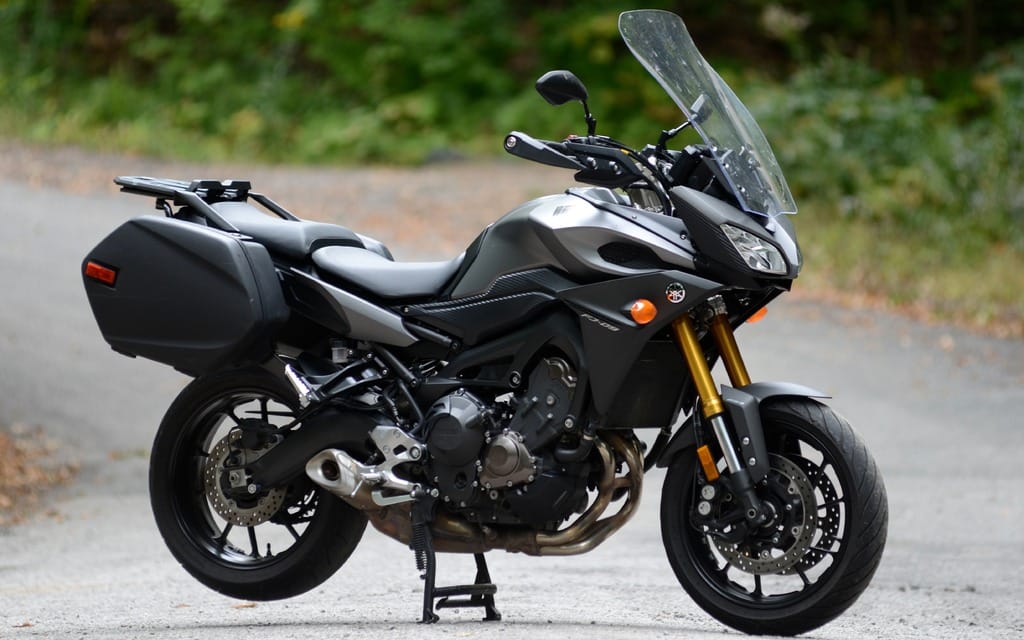 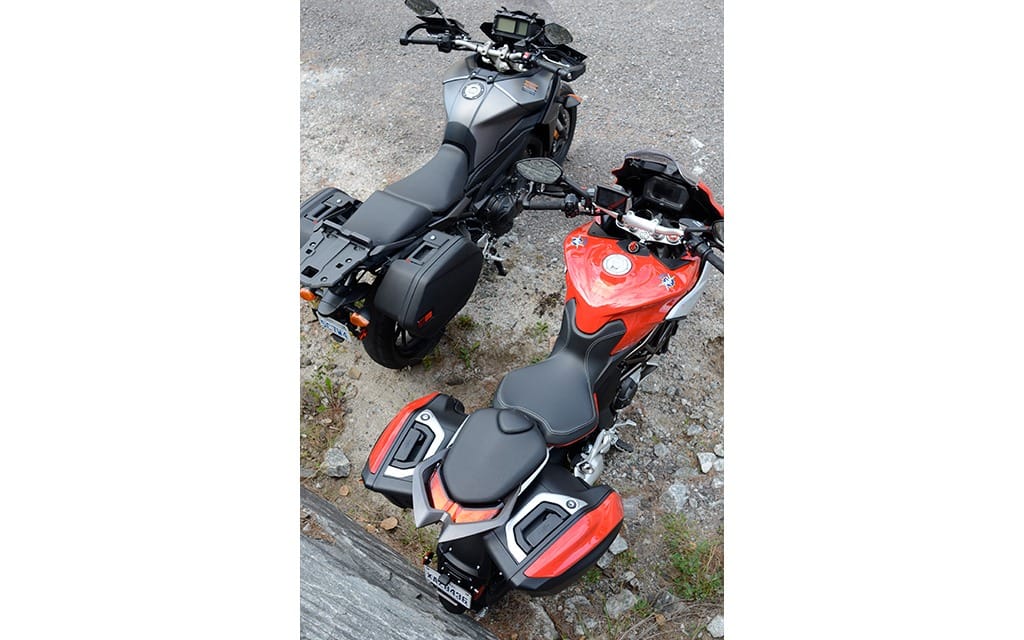 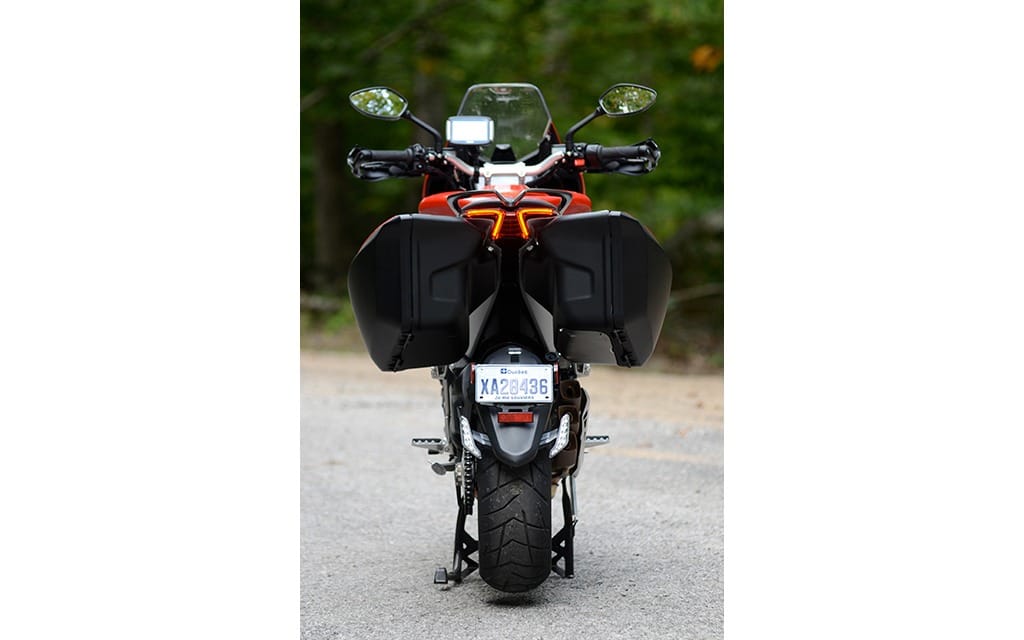 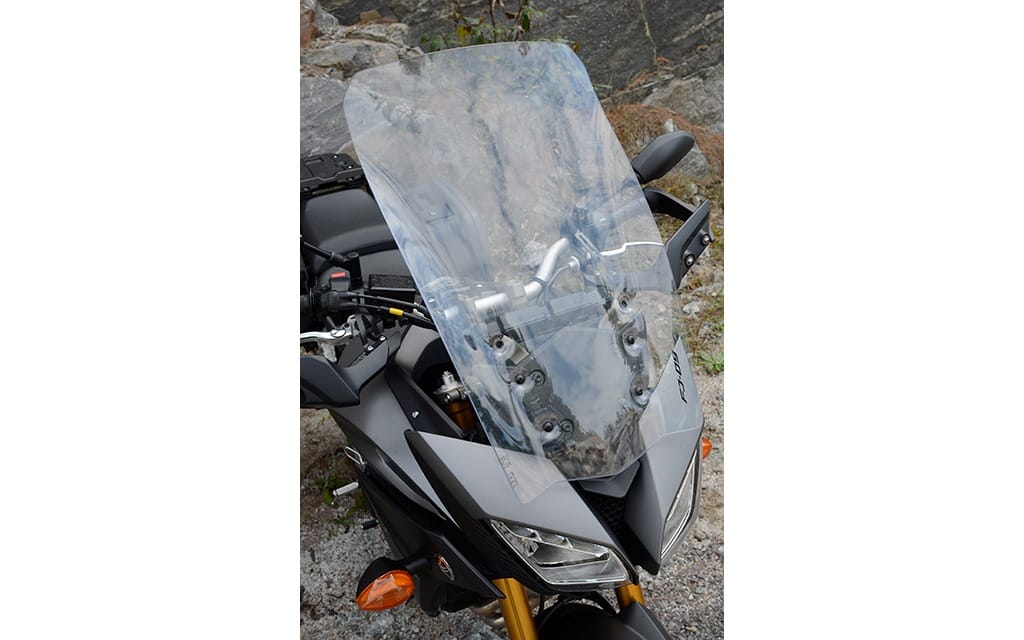 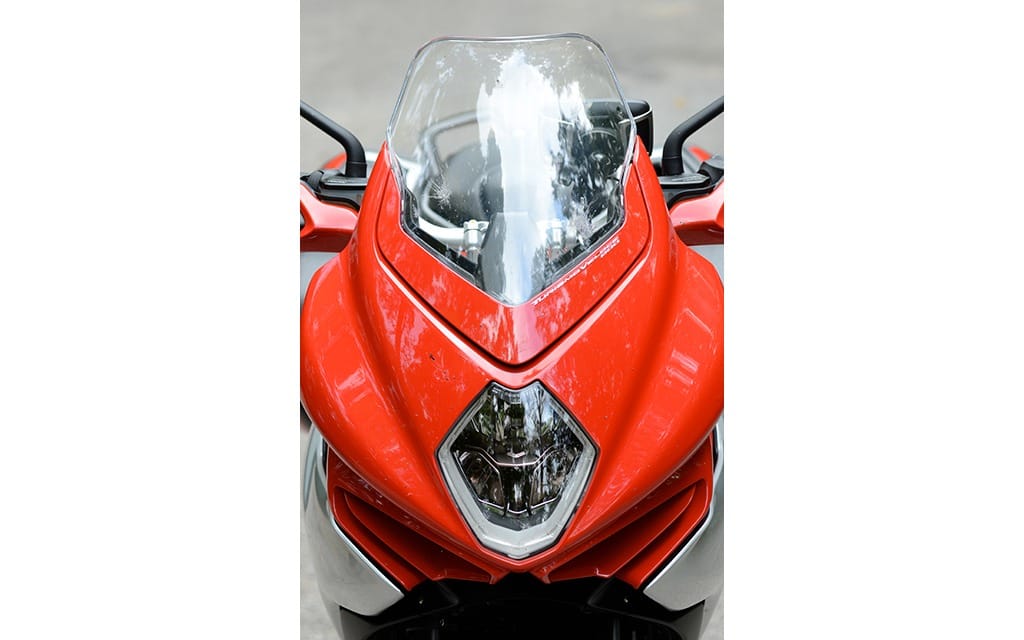 MV excuses its verbose name with an exquisite machine while Yamaha brilliantly sticks to a budget
“You know you’ve got the best job in the world, right?” We hear this all the time. Half a dozen times a day chatting with readers at bike shows. And it’s true. Sometimes. But the chance to do something you enjoy as a profession is fraught with complexities. Take sex. Fun for consenting adults, but as a profession it’s prostitution. Motorcycling when you’re not in the mood is hard. Today is one of those days. And we’ve got a long way to go and a lot of work to do before the day is done.

Yesterday James Nixon had an accident. He tangled with another rider while on track at Calabogie. He wasn’t seriously injured in the crash, but he’s sore—and more than a little unnerved. It’s the dark side of our occupation. We’ve all known a few riders who died while working, and, this morning over breakfast in the eastern Ontario town of Perth, Neil Graham is attempting to boost James’s spirits. He’s not having much success.

Compounding the problem is that we’ve scheduled a long loop back to Toronto, and to get the photographs we need it’s paramount that we adhere to our schedule. Fuelling up after breakfast, it doesn’t feel like a usual testing day. We’d planned long in advance to return to the city on Yamaha’s FJ-09 and MV’s Turismo Veloce Lusso.

MV Agusta’s three-cylinder 675 and 800 cc triples are vibrant, engaging motorcycles. If that sounds like a double-edged sword, it is. On the racetrack, MVs are visceral, howling sportbikes. On the street, as we’ve noted before, they can be finicky, feisty machines. Fuelling the modern, exhaust-emission-conscious internal combustion engine is an extremely challenging task, and MV hasn’t matched the standard set by makers who’ve been at it since long before Claudio Castiglioni resurrected the MV brand. The thought of a long ride on a machine with a hair-trigger throttle doesn’t much fill Graham or Nixon with pleasure. What they need today are machines to act as balm for a bruised body and a fragile psyche.

The 511 north of Perth begins as a straight, dull road. Travelling through the hamlet of Hopetown doesn’t bring our pair the boost its name would suggest. But slowly, almost imperceptibly, the road begins to dip and curve. Unlike other times that Nixon and Graham have ridden this road, today the pace isn’t frantic. Graham shifts the MV to top gear and lets it lug up hills and around bends. For the first time he notices houses along the route—a stout barn painted red, a farmhouse with a west-facing façade that has had its paint baked by the sun then torn away by the rain, and another farmhouse at which a plume of smoke drifts from the chimney, perfuming the air with wood smoke.

Calabogie, as a town, isn’t much to talk about. There was once a fabulous restaurant here, but now that it’s gone there’s no reason to stop, unless for fuel. Our duo traces a squiggly line through the woods toward Griffith, and halfway there, along a particularly charming stretch of densely wooded road, Graham suddenly sits straight up in the MV’s saddle, the sort of manoeuvre that in this neck of the woods usually signals a deer in the road. Not this time.

For the first time since departing Perth, Graham consciously thinks of the bike beneath him. It may be commonplace for V-Strom owners to be unaware of the moods of their steed, but to ride an MV and not be perpetually aware of its omnipresent personality is shocking. The Turismo Veloce’s Sachs suspension, which is electronically set to its most pliant setting, is BMW-worthy. And the fuelling is as good as anything we’ve ridden. Ever. Graham struggles to make sense of it. He bogs the engine then revs it to the moon. It doesn’t hiccup or belch or complain. It just motors on, smoothly and powerfully and without issue. For a split second he thinks he’s on the Yamaha, but the red and silver finish chase doubt from his mind.

MVs have always been beautiful motorcycles. Claudio Castiglioni hired the illustrious Massimo Tamburini to design the first post-brand-resurrection machine. The 750 cc four-cylinder F4 wasn’t particularly original—it was heavily influenced by Ducati’s 916, but since Tamburini designed the 916 for Castiglioni when he owned Ducati, at least they ripped off their own work—but it created a design language for successive machines. Englishman Adrian Morton is design director at MV, and the Turismo Veloce is his finest work.

The MV’s details are stunning. Everything from the front fender on back is exquisite. The tail end of the bike—which is usually a compromise on a function-first touring machine—is ingenious. The stitching on the seat (which is, miraculously, comfortable) is mounted upon an elegant aluminum support that is, regrettably, obfuscated by saddlebags. But the bags are the best part. They’re huge—both are fully capable of swallowing an XL helmet with ease—and are mounted within a whisker of the rear wheel to keep the machine’s width as narrow as possible.

Time has not diminished the allure of MV’s 798 cc triple, and sophistication has only added to its charms. The bike—for a machine of this type—is light (MV’s claim is 207 kg without fluids) and whereas many machines with legitimate touring chops can be a handful when you’re slaloming through backed-up traffic or a parking lot, the MV feels like a dirt bike. But of course there is a catch. All good things in life come with a caveat. The MV, as pictured, with saddlebags, is about $23,000. The Yamaha FJ-09—also with bags—is $12,350. Is the MV twice as nice? No, it isn’t, but that’s also not an answer.

The two machines are distinctly different approaches to the same question. The Yamaha is a lightweight tourer built to a price whereas the MV is built to a standard. From the saddle they’re surprisingly similar. The Yamaha, regrettably, is fitted with perhaps the most hideous-looking and functionally challenged optional windshield we’ve yet seen (don’t dare buy it—it’s as aerodynamically efficient as a sheet of plywood). With a little more legroom than the MV, the Yamaha pleases Nixon’s professional-basketball-player-worthy inseam, though the MV’s legroom is still generous. And the Yamaha’s 847 cc triple is a gem, and every bit the charismatic equal of the MV.

Even if we didn’t park the Yamaha next to the MV it would be hard to be inspired by the Yamaha’s design. It’s as if its designers were demoralized from the get-go and sleepwalked through the process of creation. The faux carbon fibre plastic panels are as elegantly finished as packing materials and the saddlebags look like briefcases liberated from the Salvation Army and modified for motorcycle duty. But it’s important to remember that a motorcycle isn’t a static display but a dynamic machine, and when you’re on the fly the Yamaha disguises its modest specification brilliantly. (And isn’t it telling of our overfamiliarity with the brilliance of Japanese engineering that we’re raving over the fuelling of the machine that costs twice as much while the Yamaha’s equally excellent fuelling is accepted as fact. We should be ashamed of ourselves.)

Despite the similarity of the machines on test the two won’t compete in the marketplace. Yamaha, quite rightly, will sell the FJ-09 in abundance. On the merits of function and price it can’t be beat. And it’s a rambunctious triple and not a soggy, buzzy four-banger like its middleweight predecessors at Yamaha. Alternatively, MV will sell a handful of its machine—there is only so much appetite for a machine of this price, not to mention that $23,000 will buy you virtually any machine from any manufacturer.

As the day grinds on our pair are ground down. Pass after pass they make by the photographer’s lens, when, really, they just want to beat it home. In failing light the duo dashes down Highway 400 back to the city. As Nixon pulls alongside and nods goodnight, Graham, for reasons he doesn’t question at the time, slows and watches young James take the exit ramp and disappear into the night—and then he drops the MV three gears and lets the triple wail until he thinks the better of it.