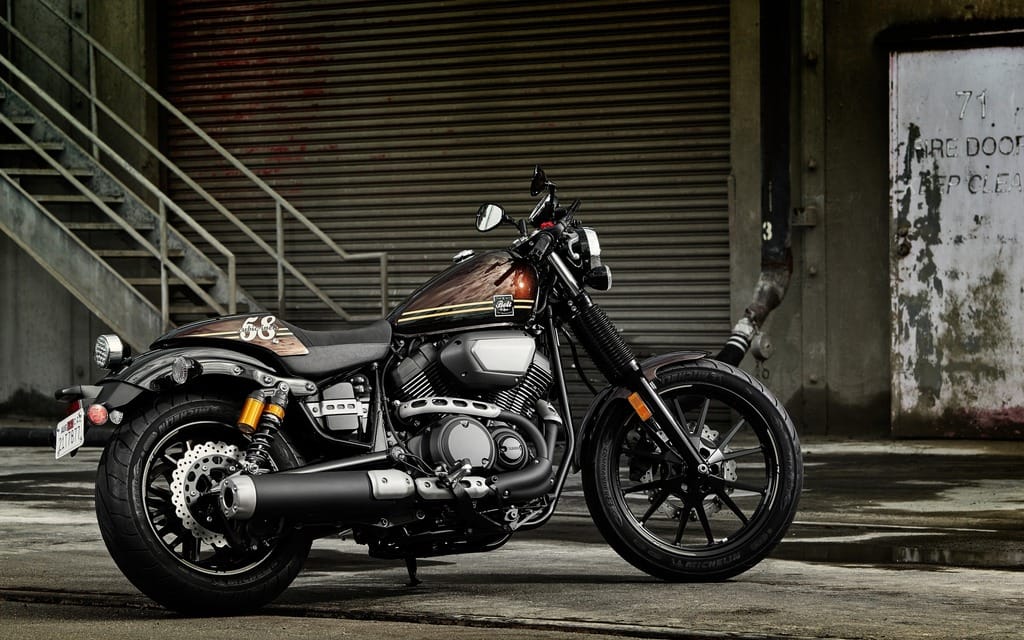 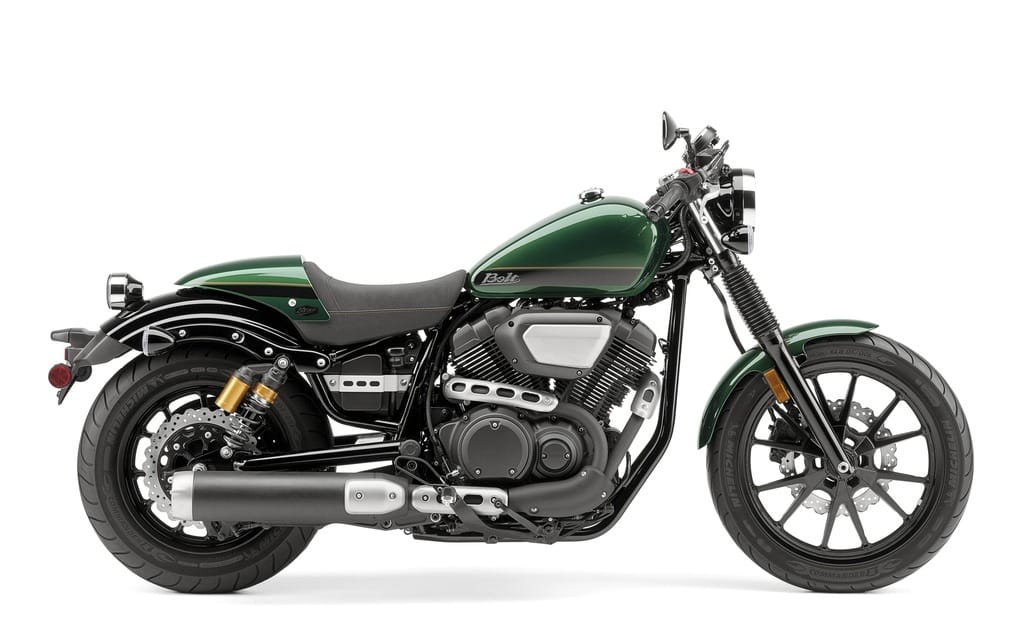 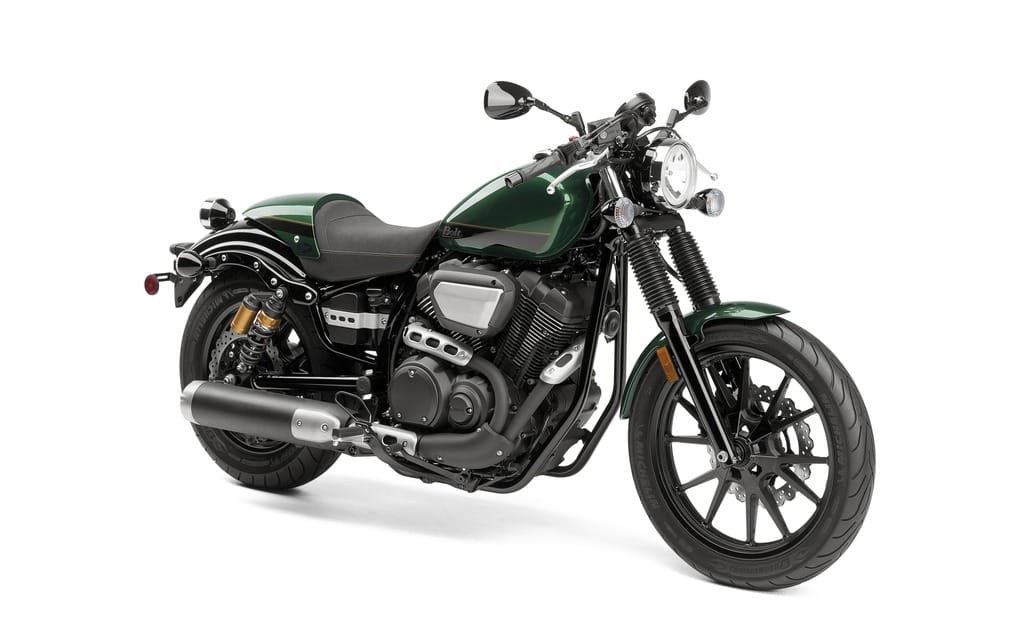 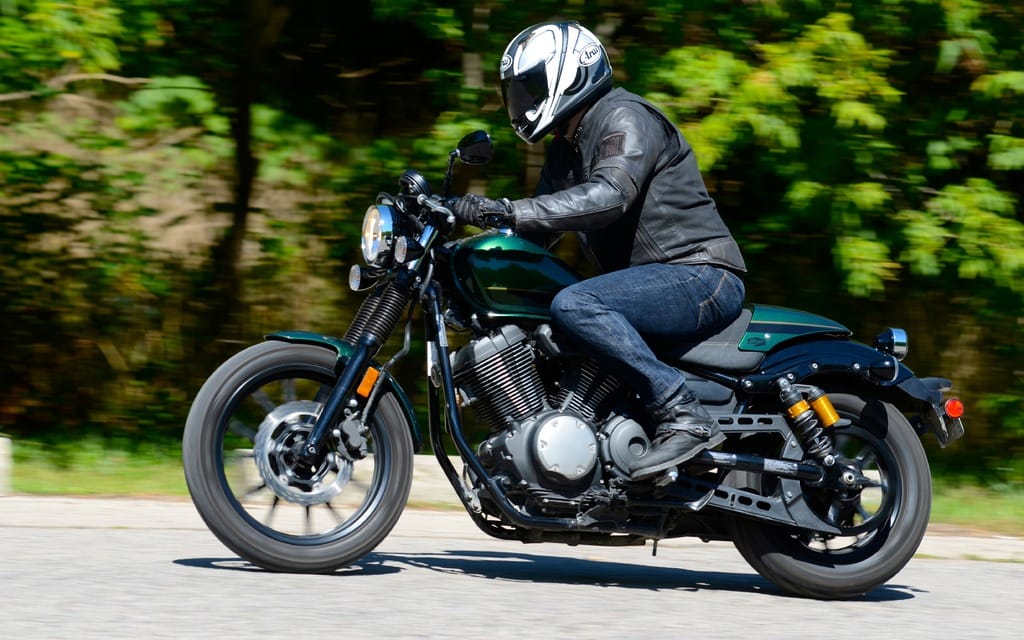 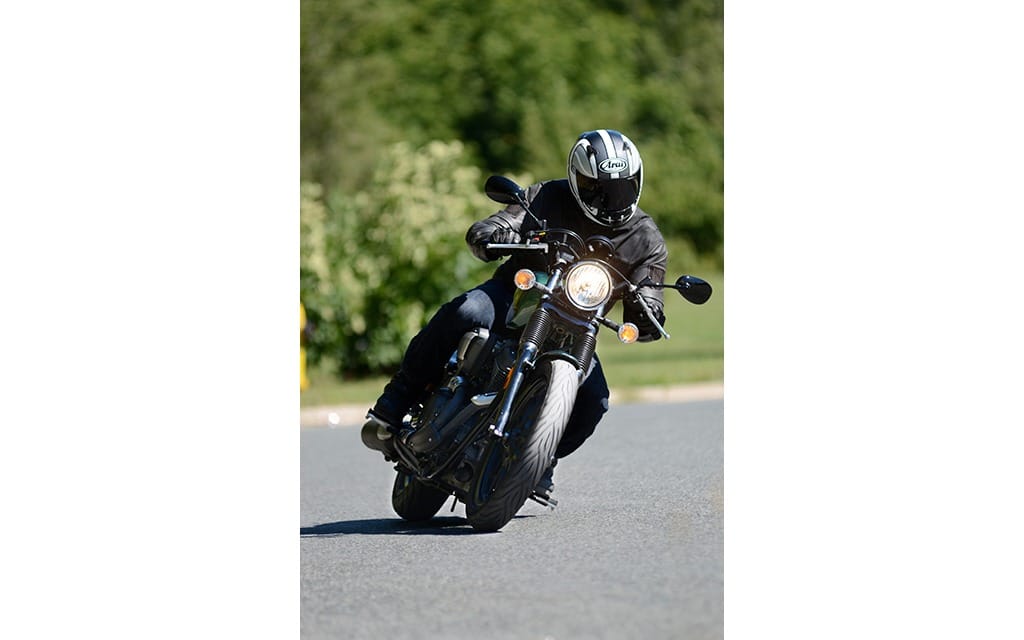 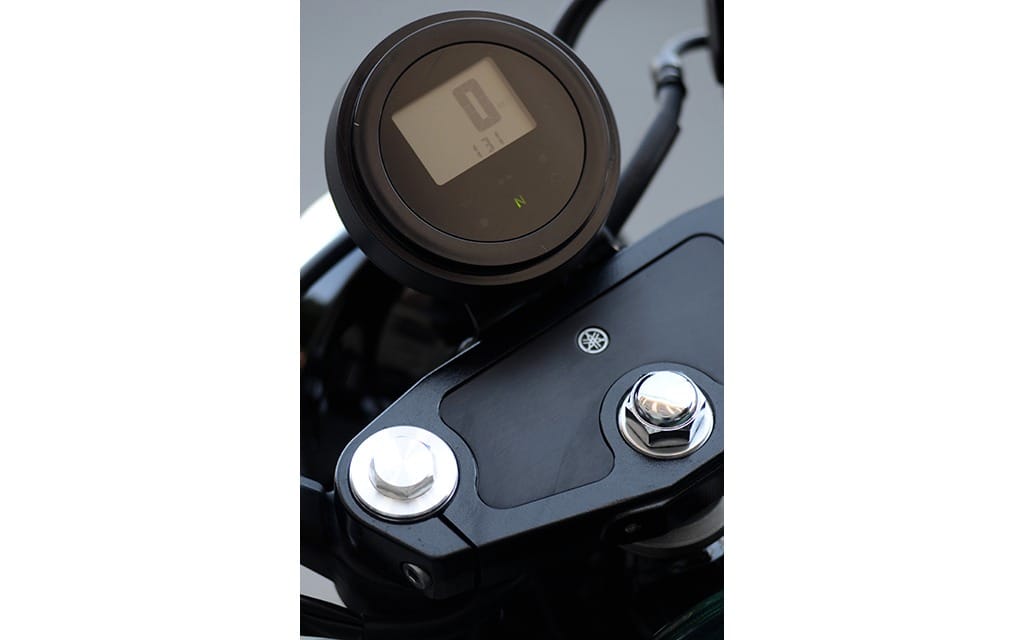 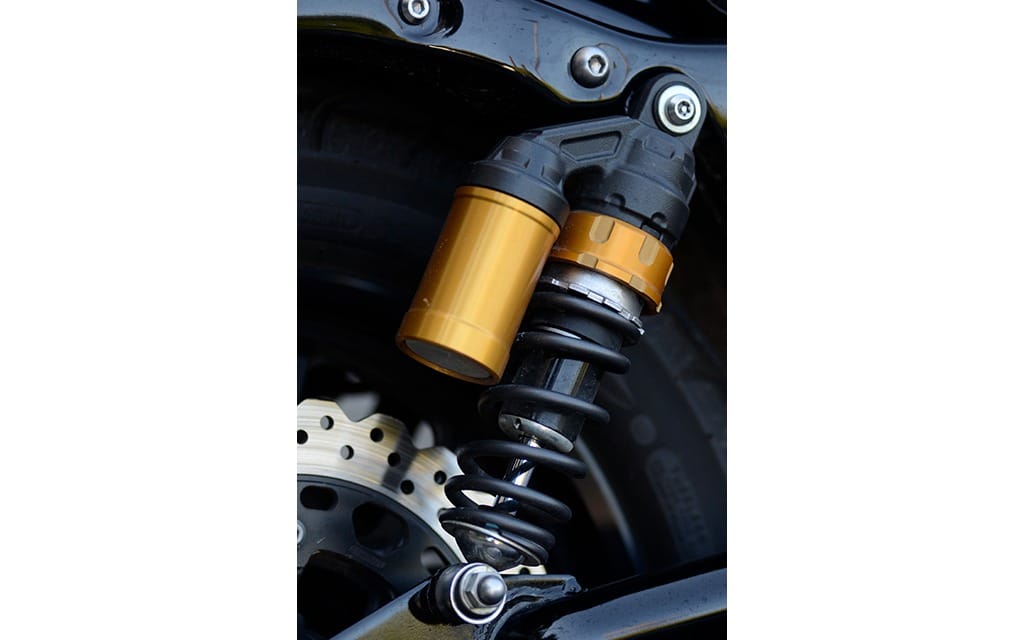 Bolt C-Spec bridges the chasm between cruiser and café racer—but is it a bridge too far?
The Yamaha Bolt, a cute, low-seat, lusty engined, attractive cruiser with a Sportster-esque vibe, was an immediate success upon its 2013 release and remains so—not least because it costs under $10,000.

Ten grand, industry people tell us, is a magical price point. Below that amount a motorcycle is more easily justifiable to parents, spouses, and parole officers. The more you move above that cost, the more out of reach a motorcycle becomes. As boomers age out of motorcycling, manufacturers scramble to tempt entry-level riders as well as to entice millennials who’ve only considered motorcycling in passing.

Those in the pre-middle-aged bracket, especially in urban centres (where Bolts are especially popular) are a picky bunch. They own beard oil and comb their whiskers just so. They prefer certain styles of Levis, plaid prints, and distressed retro leather. They seek out obscure craft brews of the highest quality. They think Roland Sands the epitome of cool. Their fondness for street tracker- and café racer-styled customs is pushing the counterculture into the culture. It’s a scene appealing to many young riders.

While Yamaha offers a wide array of accessories for the Bolt, no amount of bolting on can transform a cruiser into a café racer; fundamental seating position changes (among others) are needed to facilitate the metamorphosis. Yamaha encourages customization of the Bolt—it provided bikes to known custom builders (and capable amateurs) and gave them free rein following the bike’s introduction. The results are wide-ranging, though some of the most fetching are café racer adaptations. But while the public, particularly millennial urbanites, may like the idea of a custom café-d Bolt, shelling out for the stock bike plus stumping for customization is a non-starter. With the C-Spec, Yamaha does the work and keeps pace with the curve.

The Bolt C-Spec gets a jolt of caffeinated style and slips in under the magical $10,000 at $9,699, with carryover components from the Bolt cruiser the key to keeping the cost down. The C-Spec has the same stout double-cradle steel frame as its Bolt brethren, which houses the same air-cooled, SOHC, 942 cc V-twin mated to a chunky two-into-one exhaust system. If the 12-litre peanut fuel tank looks familiar, that’s because it is. The same goes for those steel—well, mostly steel—fenders. The rearmost section of the back fender is plastic and looks to be affixed as an afterthought, though it’s nothing a hacksaw can’t remedy.

Twelve-spoke cast rims are also shared, as are wave-style brake rotors (a single 298 mm disc at each end). Switchgear is common and as straightforward as it comes, as is the sleek LCD unit displaying speed and time in addition to the odometer and trip meter. Befitting the C-Spec’s café style, the LCD is repositioned atop the triple clamp, but one commonality between the Bolt variants is that the gauge remains indecipherable unless the ambient light is either direct sunlight or blackest midnight. (The gauge is also the exact proportion of a tin of chunk albacore tuna, which distracts as lunchtime nears.) Despite the bike’s sporting personality, a tachometer isn’t standard—it’s an option.

The C-Spec’s suspension appears similar to the Bolt cruiser’s but there are key differences—this is where “cruiser” creeps toward “café racer.” Its fork has the same 41 mm diameter but the tubes are nine mm longer—though that added length is disguised by cheap-looking rubber fork gaiters. (This “vintage” treatment has fast become hackneyed.) Despite the fork being longer, front wheel travel remains 120 mm. At the rear, the C-Spec takes the preload-adjustable piggyback faux-Öhlins shocks from the Bolt R-Spec and lengthens them by six mm, though rear wheel travel is identical to the cruiser application at 70 mm. With limited travel, the C-Spec wallops riders unwary of potholes.

Why lengthen suspension components if not to increase wheel travel and smooth the ride? Because the more sporting your stance, the better you dance (that’s the theory, anyway). Ride height is raised by about 40 mm, allowing the C-Spec the greatest degree of lean in the Bolt line. Raising footpegs 29 mm also helps, though aggressive cornering will soon grind them to fine espresso. (You’ll also touch down that bazooka-like muffler long before the Michelin Commander II tires—100/90-19 front; 150/80-16 rear—run out of traction.) Footpegs are also shifted substantially astern (150 mm) and the seat raised 75 mm (to 765 mm), which allows legs to fold at an acceptable angle. The C-Spec’s seat may be higher, but it narrows enough at the tank to put pavement within reach for shorter riders. The perch is thicker than on other Bolts, which, coupled with footpegs that more easily allow bracing for impact, gives the C-Spec the more forgiving ride.

Braking performance is on par with the bike’s overall capabilities. Clutch pull is moderately light, shifting just shy of clunky, and fuelling exemplary. Aluminum clip-ons complete the C-Spec’s café makeover. We estimate they’re roughly four inches farther forward than the standard Bolt’s handlebar, and about two inches lower, meaning this bike allows you to look like a proper boy racer.

But looks can be deceiving. From the cockpit, the C-Spec feels svelte, and at anything less than 90 km/h those clip-ons load weight on your wrists the same way a sportbike’s do. The sensation is that you’re on something small and nimble (and in comparison to some cruisers, that’s true). The engine has grunt and is plenty peppy—it’ll propel you from east- to west-end faster than you can say pardon-me-barkeep-I’ll-have-another-cask-aged-chocolate-stout—but it’s also heavy. Narrow clip-ons are part of the café package, but they mean you feel every one of the C-Spec’s 246 kg when leaning into a turn. And once heeled over, the bike bobs, weaves, and feels uncertain unless the road is smooth.

In cruiser guise the Bolt has shortcomings—namely the punishing lack of rear suspension travel and a seating position that leaves your spine utterly exposed. In C-Spec form, the Bolt’s handling feels ambiguous; it has neither the stolid predictability of a cruiser nor the light, nimble character of a café racer. Despite the aesthetic success of the C-Spec’s café racer ruse, we never completely acclimate to the C-Spec’s idiosyncratic handling—bridging the void between cruiser and café is a bit of a stretch.

Of course, a motorcycle’s function isn’t measured only in terms of its handling and performance. A motorcycle is a symbol. For some, it represents freedom. For others, rebellion, or its shadowy opposite, conformity with a group that sees itself as rebelling. More than anything, would-be buyers in this category want café racer style, and the C-Spec delivers.

On a crisp autumn morning the C-Spec beckons for a ride from a west-end apartment to a west-end café for breakfast. The huevos divorciados (with salad, thanks) are spicy and the double espresso rich. Outside the front window of Easy Restaurant, its tailpipe to the curb, a streetcar trundling past its front tire, the Yamaha Bolt C-Spec looks right at home.