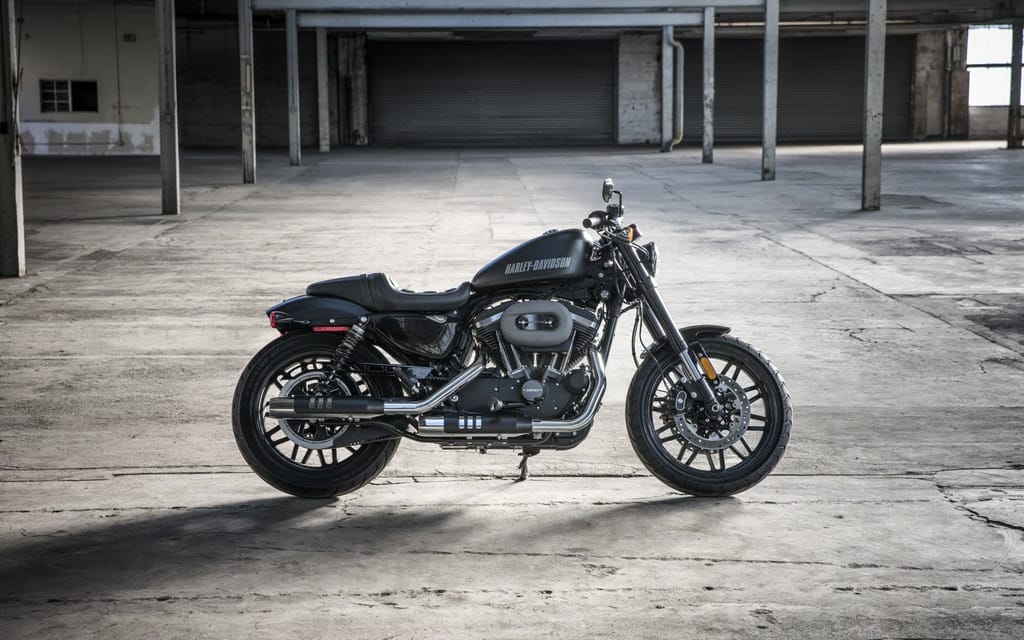 Shaped by nearly 60 years of heritage and stripped to the essential elements of a pure riding machine, the new Harley-Davidson® Roadster™ motorcycle is at home in urban landscapes and on twisting roads and makes a bold visual statement even when standing still. The new Roadster™ will be unveiled in Canada on Friday, May 13th in Port Dover, Ontario, home to the famous PD13 motorcycle rally.  Roadster pricing for Canada will also be announced on Friday, May 13.

“We are excited to bring the inspiring new Roadster™ to motorcycle enthusiasts across Canada,” said Anoop Prakash, Managing Director, Harley-Davidson Canada.  “With 75 per cent of Canadians living in urban environments, the Roadster will be a natural fit for riding in the city, with the performance to get out of town.”

The new Roadster model, which is featured in Harley-Davidson’s global Live Your Legend marketing campaign, joins the Dark Custom lineup with a minimalist design inspired by classic racing motorcycles and current trends in stripped-down, naked custom bikes and a profile reminiscent of racing Sportster motorcycles from the 1950s and 1960s.

“Since its introduction in 1957, the Harley-Davidson Sportster has proved capable of constant reinvention, and the Roadster writes a new chapter in that story,” said Harley-Davidson Director of Styling Brad Richards. “We’ve watched our customers take the Sportster in so many different directions. The Roadster is a mash-up of styling genres, but the intent was to build a rider’s motorcycle, a Sportster that’s lean and powerful and connects the rider to the road.”

The Roadster delivers modern performance with a combination of new wheels and tires mated to premium suspension components and an air-cooled 1200cc V-Twin engine that delivers a strong pulse of mid-range torque. The 19-inch front and 18-inch rear Offset-Split 5-Spoke cast aluminum wheels were designed specifically for the Roadster and contribute to its balanced, athletic stance.

“We wanted to give the Roadster some DNA from the high-performance KHR models of the mid-50s, and later Sportsters tuned for the drag strip,” said Richards. “Those bikes had fenders cut to the struts, the small fuel tank, and were stripped to their bare essentials to achieve a singular performance purpose.”

The Roadster’s suspension is enhanced by new 43mm inverted single-cartridge forks with tri-rate springs, gripped in robust triple clamps and rear suspension featuring gas-charged emulsion coil-over shocks and tri-rate springs with adjustable pre-load and offers greater suspension travel than any other Sportster model – 4.5 inches in front and 3.2-inches in the rear. Outstanding stopping power is achieved with dual 11.8-inch floating rotors on the front wheel. The Roadster is available with optional ABS brakes.

The Roadster puts its rider in an aggressive posture with a new low-rise handlebar and mid-mount foot controls that center the rider’s weight over the classic profile of the 3.3-gallon Sportster fuel tank. The Harley-Davidson Roadster model will be offered in four color choices: Vivid Black with a charcoal denim pinstripe; Black Denim with a red pinstripe; Velocity Red Sunglo with a red pinstripe; and two-tone Billet Silver/Vivid Black with a burgundy pinstripe.

About Harley-Davidson Canada
In August 2015, Harley-Davidson Inc. took over distribution in Canada as part of a global strategy to establish subsidiary units in its most important markets.  The new entity, Harley-Davidson Canada, has focused on bringing the full Harley-Davidson ownership experience to Canada.  Harley-Davidson® motorcycle parts, accessories, general merchandise, riding gear and apparel are available in 69 independent dealerships across Canada. Harley-Davidson plans further expansion in 2016 with the appointment of three new dealers in Vancouver, Toronto and Montreal. For more information, visit www.h-d.com.