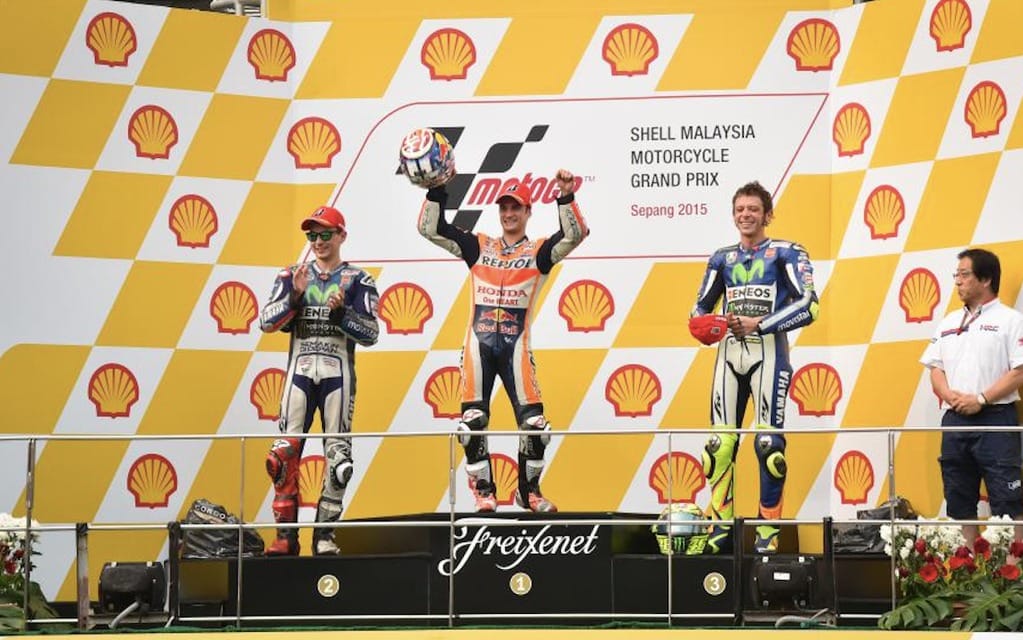 Dani Pedrosa (Repsol Honda) was the winner of Sunday’s MotoGP stop in Malaysia, though that’s not what’s grabbing headlines.

The Spaniard led from start to finish at the Sepang circuit, followed over the line 3.612 seconds later by Jorge Lorenzo (Movistar Yamaha). Valentino Rossi (Movistar Yamaha) finished third, 13.724 seconds back – but it’s how he ended up there that’s interesting. (For full results from Sepang, click here.)

During Thursday’s pre-event press conference, Rossi called out Marc Marquez (Repsol Honda) for purportedly playing with the pace at the previous race in Australia in an attempt to disrupt Rossi and aid Lorenzo in the overall championship. Marquez flatly denied the claim and tensions between the two were at an all-time high.

That set up the titanic battle between the two in Sunday’s race, Rossi and Marquez trading places with hard moves numerous times during a handful of laps. Rossi became visibly frustrated with Marquez during the race – no doubt his behaviour, in Rossi’s eyes, supported Rossi’s view that Marquez was playing with the pace. That frustration boiled over when Rossi purposely ran wide and slowed in turn 14, forcing Marquez to the outside. The two made contact, which resulted in Marquez crashing out. (Click here to see the incident.)

The incident was reviewed by Race Direction, who deemed Rossi at fault for “irresponsible riding, that is, deliberately causing contact.” As a result, Rossi was given three penalty points. This, as you’d expect, has resulted in an uproar from teams, racers, the media, and fans alike. Accusations, claims and counter-claims have been made, some defending Rossi, others arguing for harsher punishment.

Whatever your view, the fact is that Rossi, who leads Lorenzo by just seven points in the championship standings, will now start from last on the grid at the season finale in Valencia on November 8.