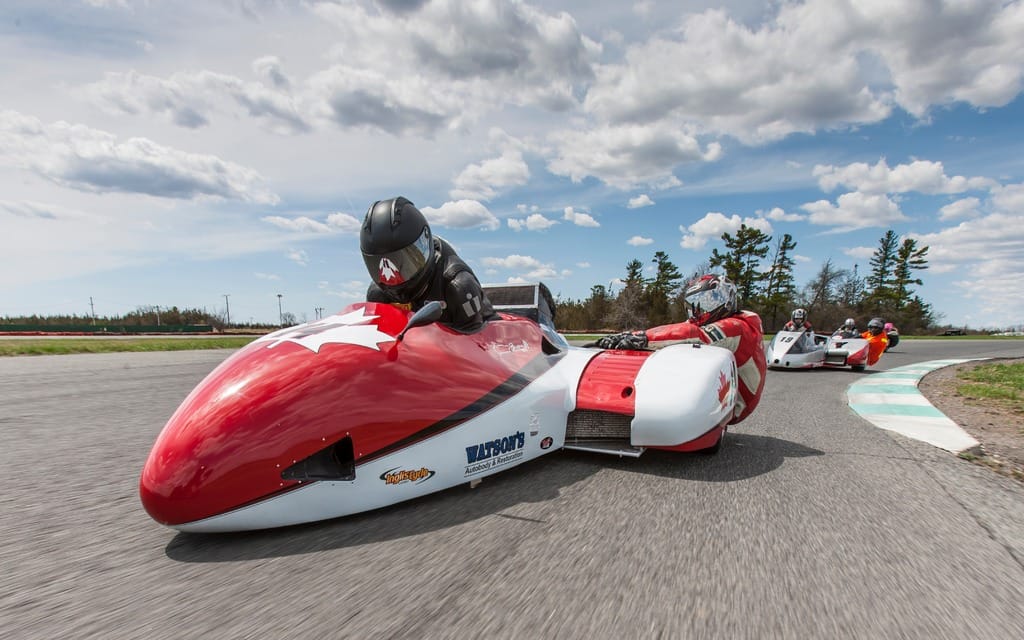 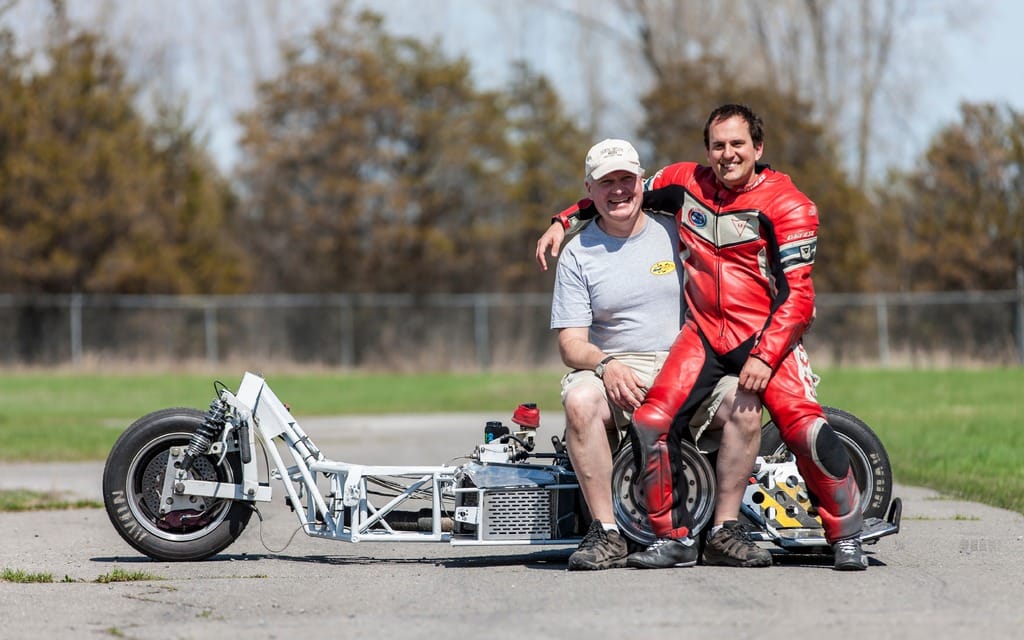 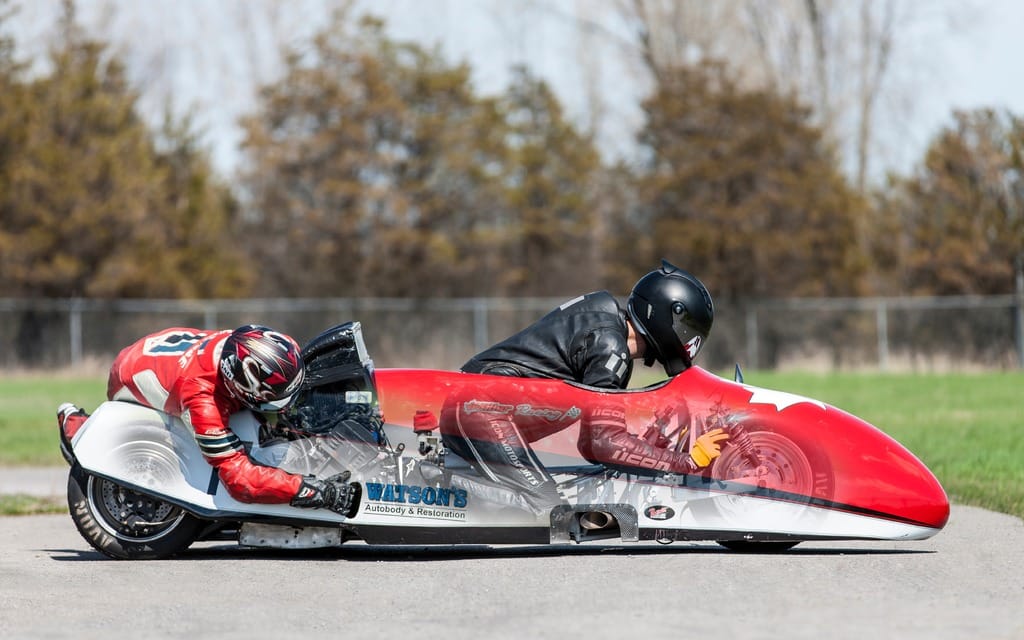 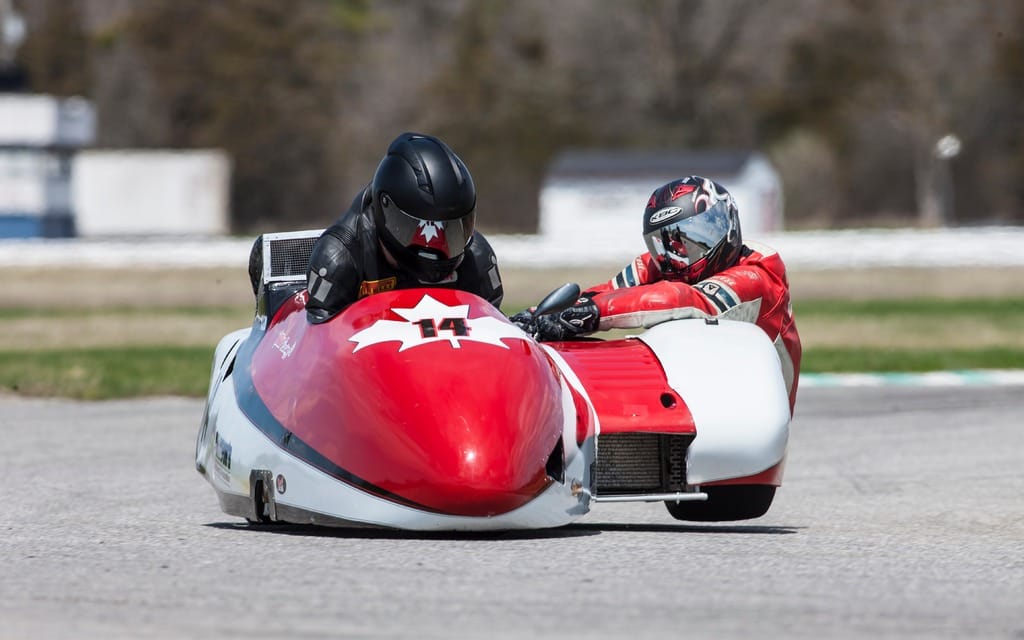 Take everything you know about motorcycles and set it aside, it won’t do you any good in an F1 sidecar rig

I’m perched on my knees and my elbows, my ass is hiked in the air, and a third man has joined the scrum behind me. I feel a number of hands on my legs. “Can you lean a little more forward?” one of them asks. I do my best, and walk my forearms ahead in little steps, like a man crab-walking through a crawlspace. “You’re close,” another man says. “I think you’re in,” says the other. Beads of sweat are trickling down my forehead and stinging my eyes. I’m exhausted, and have yet to move the sidecar ahead, but now my toe, at least, has finally found the gear shifter.

A few years ago I spent a practice day as a sidecar monkey on a vintage rig, but this is different; today I’m driving an F1 sidecar rig powered by a Yamaha R1 superbike engine. The owner, and its regular driver, is a man named Russ Miller, a soft-voiced, softly built man of 50. Miller’s countenance is calming, though his message isn’t always comforting. I ask him about the mistakes beginners make. “Everyone spins it,” he says.

Before we head out on Shannonville’s Nelson circuit, we ride out to a parking lot at the facility’s north end. Hay bales are placed in a row to create a slalom course. I turn to the man who will be riding with me — the affable 31-year-old Fabio Petruccelli — and ask if he prefers the term passenger or monkey. He shrugs. We agree on passenger.

An experienced racer of solo motorcycles (in the company of sidecar people it’s necessary to distinguish between two- and three-wheelers) told me of his experience driving a sidecar. “I wedged the sidecar under an ambulance parked on pit row,” he said. “I forgot how wide it was. We had to drag it out from under the bumper.”

I miss the ambulance but club the hay bales on the makeshift slalom course. Unlike my experience in the vintage sidecar, where the rider and passenger are aware of each other’s presence, the driver of a modern sidecar can’t see his passenger. (A vintage sidecar passenger moves fore-and-aft on the platform in addition to left-and- right, while the modern practice is left-and-right only, entirely out of the driver’s peripheral vision.) At a break Fabio requests that I leave more room on left-handers. I ask if he’s OK. He smiles and laughs.

I’ve adapted to the peculiar nature of sidecar controls more quickly than expected. The clutch is a lever on the left clip-on, in standard two-wheel practice. The throttle remains on the right side, but it’s not a motorcycle’s twist grip. Instead, it’s a forward mounted lever pulled toward the bar with the middle and index fingers, like a snowmobile throttle. Poking the toes of the left foot into a difficult-to-find-because-you-can’t-see-it cage (hence the need for three helpers) allows the changing of gears: toes to the front of the rig for first gear, and then back for the other five. A single lever actuated by the right foot accomplishes braking.

While the controls become intuitive more easily than imagined, the position in which your body is contorted borders on the cruel: it’s like driving a car while locked in its trunk. Pockets in the fiberglass fairing support knees and elbows, but the steering effort required, especially on slower turns, is massive. The tires are chunky Avon slicks, and while right turns are relatively easy (the left-hand nature of the sidecar’s third wheel effectively works as a cornering brace) left-hand corners have all the grace of a snowmobile on pavement, as the sidecar wheel lofts and the rig ploughs toward the outer edge of the track. Given the size of the tire’s contact patches, the low centre of gravity, and the weight of the rig with two men aboard, I’m surprised that wheelspin can be dialled in so easily. It’s easy to see that truly rapid progress (and less physical effort for the driver) relies on a good turn of speed and using momentum in conjunction with wheelspin.

I’m also struggling with seeing where I’m going. A rudimentary fender protects the rider from the worst of what the front wheel tosses up, but your chin is only inches from the tire, and a cocktail of track debris and rubber bits is being driven into the bottom of my helmet and into my eyes, and it seems worse on those troublesome left handers. Russ claims my “prairie dog” body positioning exacerbates my problem: I’m poking my head up in the breeze — and exposing the bottom of my helmet to what’s beneath — as opposed to keeping my chin close to my chest. In theory I understand his reasoning, but if I tuck my head down I can’t see the track ahead. The simple cure would be to reposition my eyes at the top of my forehead, but an operation of that severity would likely induce other complications.

I’m so focussed on my driving that I completely forget that Fabio is hanging on at the rear of the rig. In addition to the usual flags that trackside officials use (yellow for caution, red for a serious incident, blue to indicate that you’re about to be passed) there is a red-and-yellow striped flag shown to warn that your passenger has been ejected from the sidecar. A jolt of horror goes through me when I see the flag waving at me on the front straightaway. Poor Fabio, I think, he was so young, he had so much to live for. I slow and twist myself around to confirm his absence, but he’s still there. Later I learn, cruelly, that the flag for losing your passenger and the flag for debris on the racetrack is one and the same. That flag wasn’t for Fabio; it was for a chunk of sidecar rig lying on the track.

As the day progresses Fabio and I get into a rhythm, or at least I think we do, because I have no idea what he’s doing back there. I don’t know the difference between a good passenger and a bad passenger. He could be fast asleep. I ask him how I’m doing, and he reassures me that I’m not that bad. Pretty decent for a novice, he says. I think that’s passenger-speak for not driving over curbs or under ambulances. There is another rig being driven by an inexperienced crew today, and together Fabio and I gain on them. Soon we’re on their tail, so close that the other rig’s passenger hears us (or senses us) and spins around and looks me in the eye. At this point I’ve forgotten that I’m driving a sidecar and it becomes pure competition, and for those half-dozen or so laps I’m as comfortable as I get all day. As I line the rig up for a pass, a memory tempers my aggression.

My limited awareness of sidecar competition is primarily an infamous — and sobering — incident from the Isle of Man TT races. In it a sidecar driver miscalculates the proximity of a wall and clips it, at which point the passenger is propelled into space (rather comically, it must be said). But I like Fabio, and there is nothing riding on us passing this other rig, so I pull in behind and fall back. Later I sense that Fabio was disappointed that we didn’t go for it.

Fabio says that sidecar racing intrigued him when he saw a DVD of Isle of Man footage. He enrolled at a sidecar school, was introduced to a rider in need of a passenger, and was on his way. After a year off because of work commitments, he’s now teamed with Russ for the upcoming season. (Fabio’s a banker. “When you guys talk bikes,” he says, “I have no idea what you’re talking about. My father worked in IT.”)

The passenger is essential to the rig’s success, as a driver relies on the correct positioning of a passenger to set his speed. If the passenger is in the wrong position, or has fallen off (it happens) the rig is unstable, and the unsuspecting driver is often unaware until it’s too late, especially on left-hand turns where the passenger’s ballast is critical to turning. The immense cornering forces that the passenger must fight against compound the difficulty of the passenger’s duties. High-speed corners or ones that come in quick succession tax the passenger’s skills. Fabio says that it’s his job to “keep the rig stable,” and that physical endurance and finding “synergy with the driver” are particular challenges.

Russ Miller’s racing career began modestly, as a volunteer race marshal. Seven years ago he bought an older solo motorcycle, and then passengered with driver George Brockie. When Brockie moved out west, Russ bought his rig and transitioned to driver. Russ confesses that it’s been a struggle to get back to the speeds that he became accustomed to with the very rapid Brockie at the controls. At first, in Brockie’s absence, the challenge was to finish a race while remaining on the lead lap. Now, with Fabio as a passenger, his goals are to be in the top three. (Fabio, says Russ, is a very good passenger.)

Russ’s invitation was to prove to me that sidecar racing (and, by extension, any sidecar activity) isn’t the freak show that motorcyclists often believe it to be. As a former speedway racer (the bikes without brakes) I’m familiar with the disbelief that often confronts adherents to marginalized motorcycle subcultures. In my day on the track (and back in the paddock) I learned of a close- knit, convivial fraternity. All motorcycle racing is a cult pursuit, and Russ’s dream of seeing his passion branch out beyond its current borders is a lofty aspiration. But don’t worry about that, Russ. Sometimes the aura of madness that surrounds life at the fringes is just what you need to keep the maddening mainstream from messing up your fun.