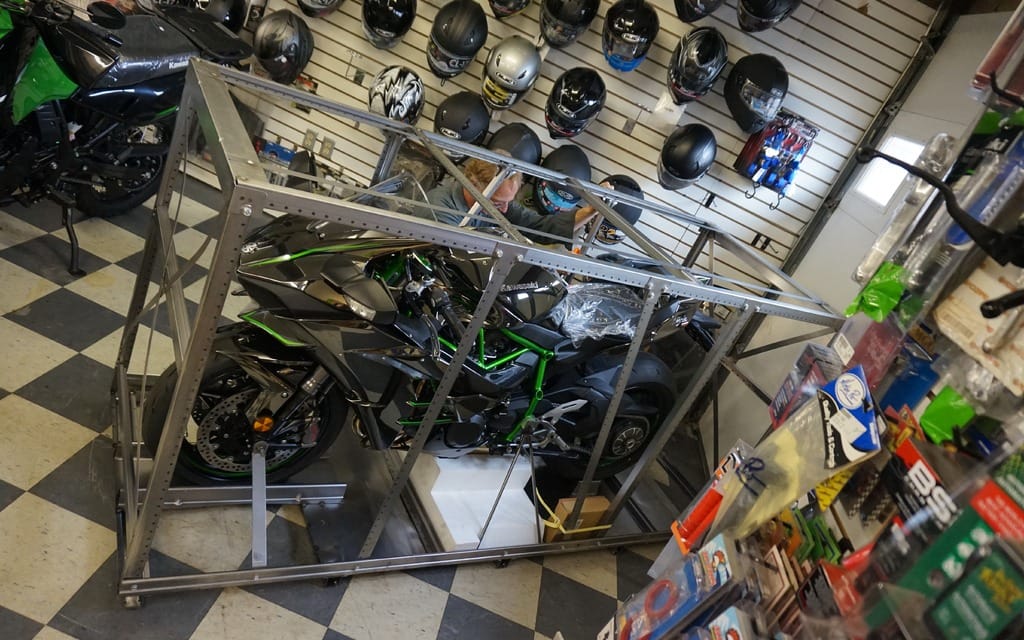 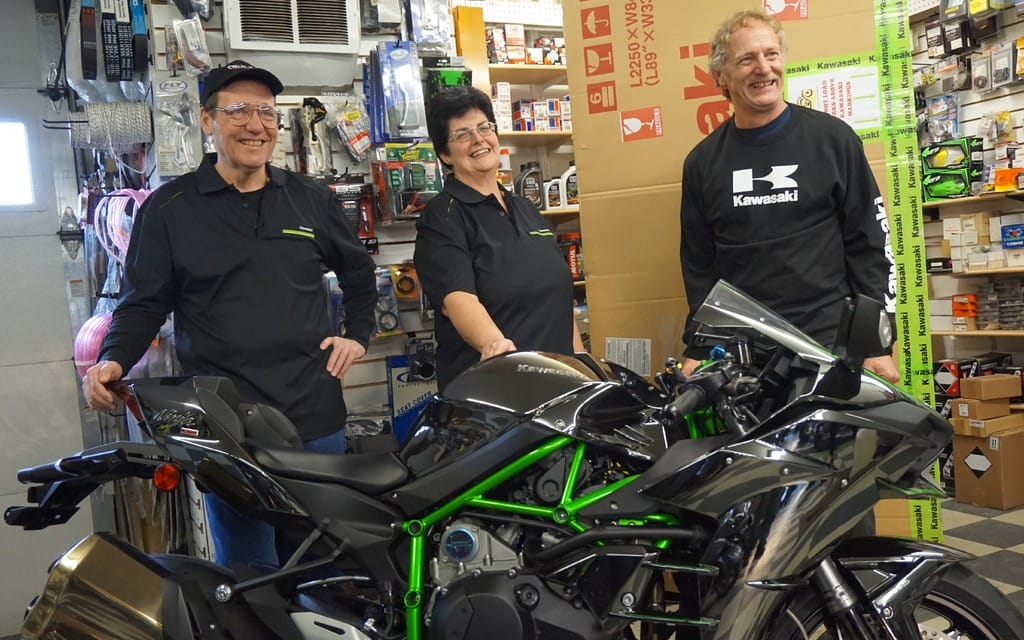 Rare but out there

Can’t make up your mind between Kawasaki’s H2 and H2R? How about one of each?

The Kawasaki Ninja H2 and Ninja H2R are exotic and exclusive, though you don’t have to travel to Qatar — where Roland Brown went for the press launch — to find them. We came across a still-crated H2 in, of all places, the southwestern Ontario town of Woodstock. Walt Neutel of dealership Cycle One was handing over the first H2 in Canada (aside from the motorcycle-show-only display model) to Dennis Patrick, who was quaking with excitement while his prize was unwrapped. After seeing his H2 in the metal, I can’t blame him.

Yes, it’s supercharged, but that’s not why the H2 is covetable. What’s the biggest reason to sell a kidney to get one? The finish. Kawasaki calls it mirror coated black. I call it unbelievably gorgeous. In changing light its colour flows like water in a river: chrome in a flash, pitch-black in shade. It reflects perfectly the checkered floor of the showroom and Neutel’s hands as he loosens the nuts on the steel cage surrounding the bike.

Those hands are clean but well used, familiar with grease, oil and grime (this is a small shop, after all). “I don’t want to touch it. The finish is so beautiful,” Neutel says. Not many people will have the opportunity to touch one. “We’ve had a lot of interest,” he says, “but very few serious inquiries.” Not surprising, given the H2’s $27,500 price. At a whopping $55,000 the H2R cleans out the chequing account even more. Neutel says 35 street-legal H2s are coming to Canada, but just five track-only H2Rs. Dennis Patrick is the sole Canadian to buy one of each.

“It’s a shame they didn’t come together,” Patrick says about his pair of speedsters. (His H2R has since arrived.) “Although I guess it’s a good thing. I’ll get some seat time on the H2 first, get comfortable with the settings and controls, get a few runs in, ease back into racing.”

Why would a 60-year-old retiree from Windsor buy a pair of over-the-top motorcycles? As a former drag racer of the original H2, he says they simply make sense for him.

It started with a 1972 Kawasaki H2 750, on which he accrued 23 moving violations in one season of street riding. “It made it obvious I should focus on the track,” he says. “I started going to St. Thomas and Cayuga, did the Canadian nationals, then started going to Milan, Michigan, and got into racing with the International Drag Bike Association (IDBA). I set my first IDBA records in 1987 and retired from racing in 1990.”

Meanwhile, he’d started Falcon Performance and had the Canadian distribution rights for Lectron racing carbs. “I had boring bars, a flow bench, all my own porting equipment. But there wasn’t enough money in performance parts, so I opened Falcon Compressors and Industrial Equipment. When I retired from racing I focused exclusively on the air compressor business.”

After more than a decade away from the drag strip, Patrick returned last summer. “We went back to the track and fell in love with it,” he says. “I lost 80 pounds, bought a ZX-14R, and made 300 passes last year. I approached Walt about getting a bike with no pipes and no wheels, with the intention of building a racer. He told me to hold off, that something stupid-fast was coming. When I found out they were building a bike for maximum speed and naming it the H2, I knew this was going to be a monumental motorcycle.”

But why buy the H2 and the H2R? “It sort of snowballed,” he says. “We went all-in. I’d wanted to build tribute bikes to my mother and to Dave Schultz [an American drag racer friend]. The H2 would be dedicated to Dave, the H2R to my mother.” A fine sentiment — but a sentiment can’t bankroll two bikes: the pair, with taxes, is closing in on $100,000. How can he and his wife Gwen afford it? “We have a lot of support from a lot of good people,” he says. “Also, my mother left me some money, which will be used to fund the H2R — which is why it’s a tribute to her. She had a phenomenal impact on my life and was supportive of my racing career, even though she could never figure out why I wanted to go that fast on a motorcycle.”