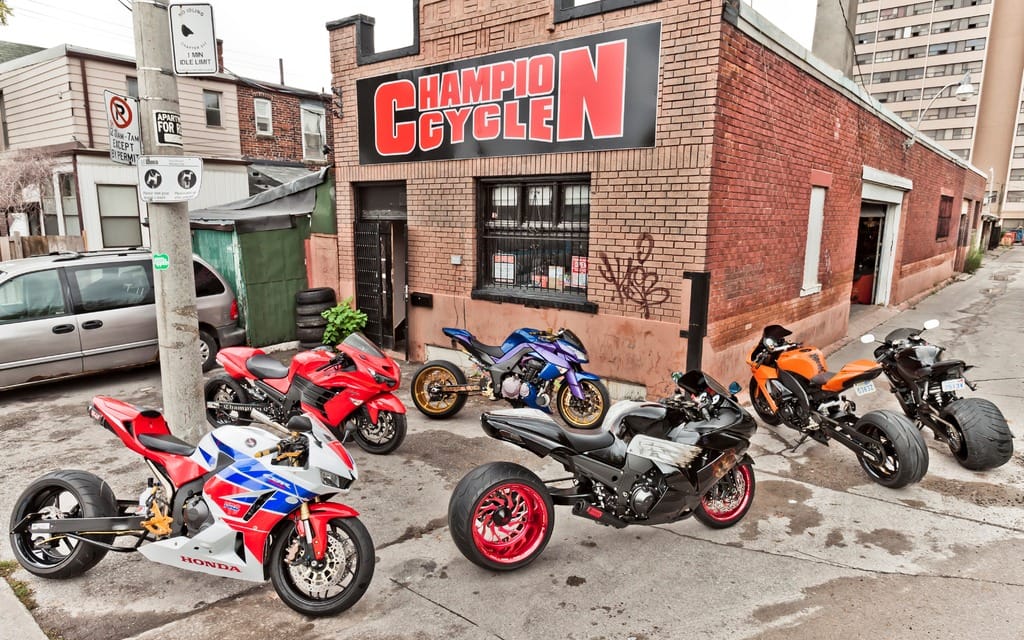 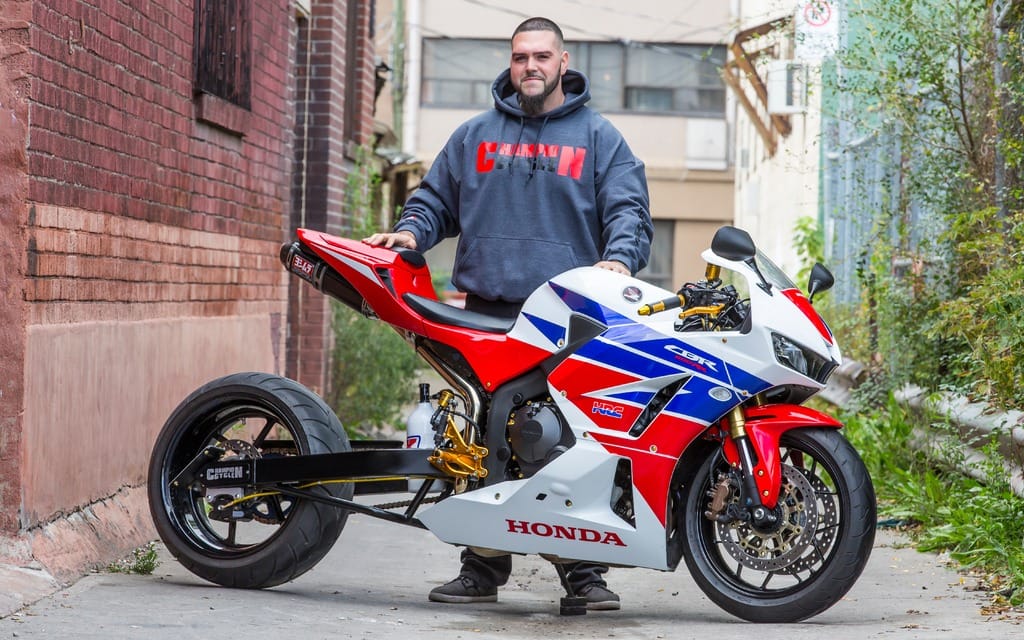 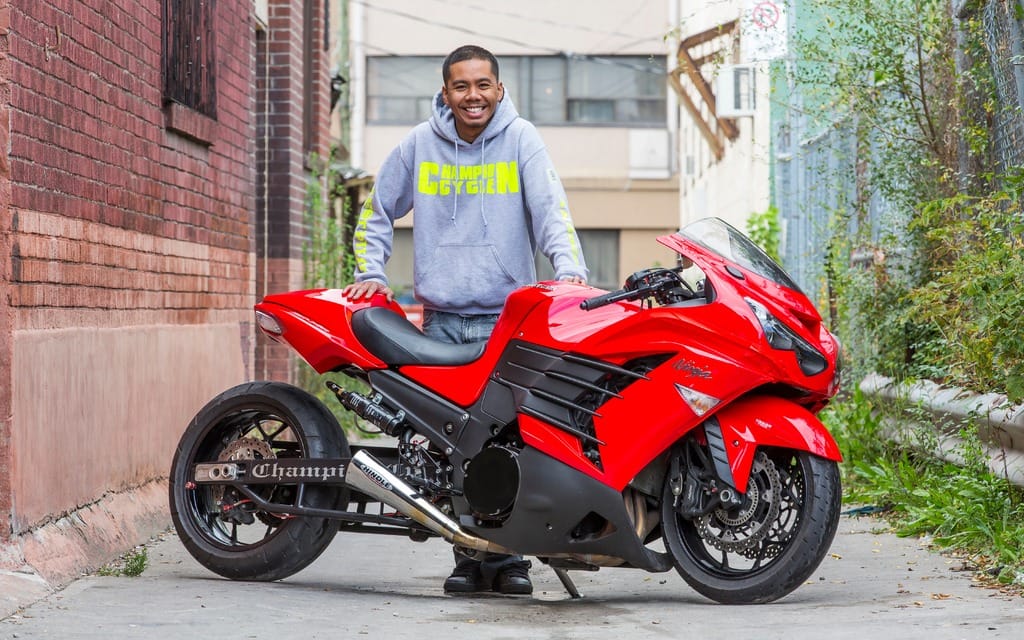 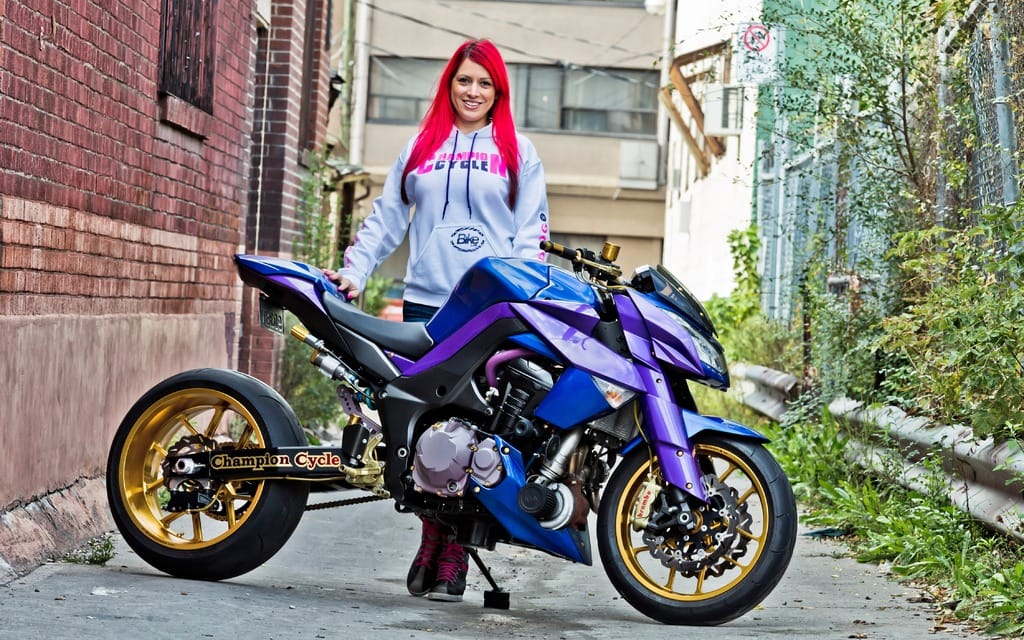 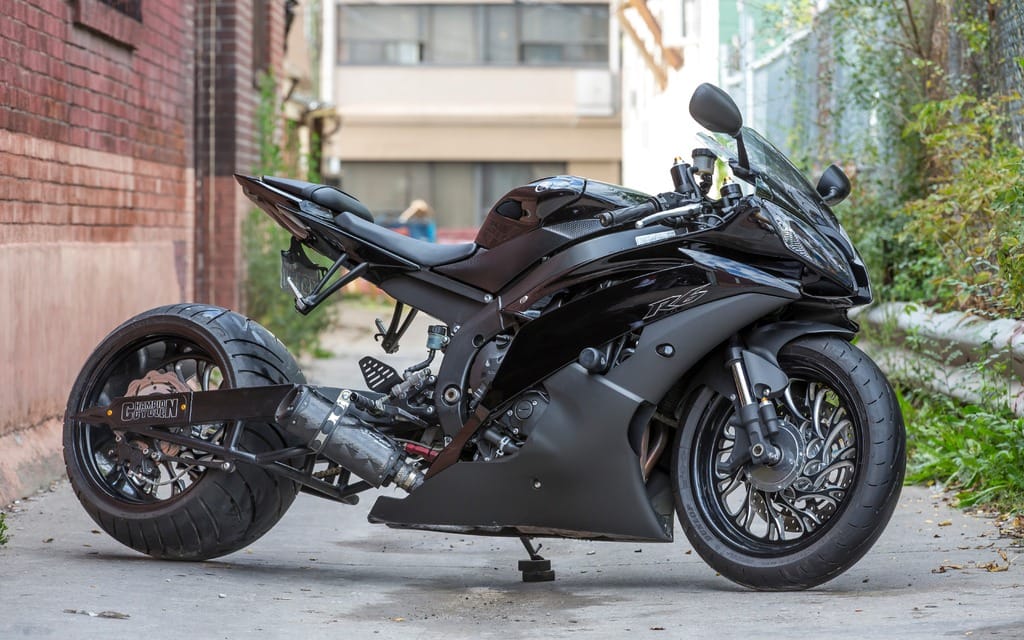 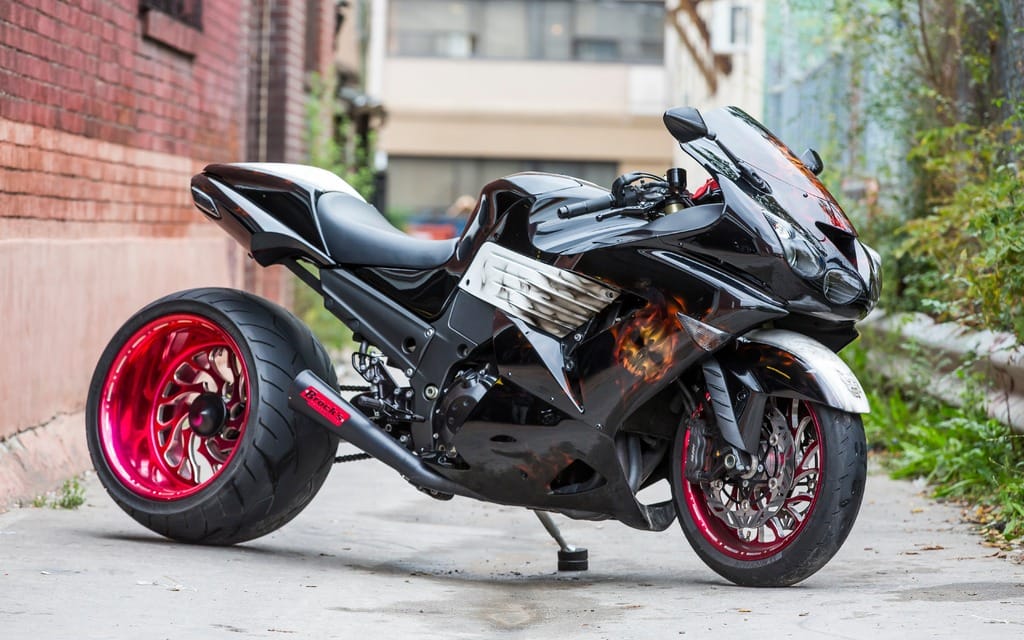 If you’ve been to a bike show in the past decade, you’ve seen them in the custom hall — sportbikes with massive rear tires slotted into swingarms far longer than stock. But where they were once anomalies in a sea of chromed-up and raked-out choppers, now they’re almost commonplace. Regardless of what you think of them, the stretched and slammed sportbike movement can no longer be ignored.

It’s not just at shows, where motorcycles are cordoned off and displayed like prized pets. We’re seeing bikes with stretched swingarms in the wild more often (and not just at drag strips). Last summer, CC staffers crossed paths with them in Sarnia, Barrie, the Ottawa Valley, and in Montreal. In Toronto, stretched bikes are commonplace; we give them the same cursory glance we would a KLR650.

If you see a stretched bike in Toronto, there’s a good chance it’s a Champion Cycle job. Danny Haig’s west-end Toronto shop opened eight years ago, and offers general maintenance, engine overhauls, race preparation and in-house custom paint. They have their own dyno, install nitrous systems, and even produce and install made-to-order turbo kits. Oh, and they stretch bikes, and do a good job of it, too (shelves sagging with awards and a feature on Discovery Channel’s Daily Planet are proof of that).

Haig says stretched-swingarm work accounts for about half of his business. “There’s a lot more of it than people think,” he says. “I get at least one call a week about stretching a bike.” Those calls translate into about 10 stretches per month in peak season. “I’m constantly ordering stretch kits,” he says. Though business slows in the winter, Champion still does roughly 100 stretches a year.

Swingarm extensions — bolt-on sections that are attached to the stock arm — make up the bulk of that number. It’s the simplest and least expensive option, but even so, you can’t just bolt on and go. The chain and brake line need to be lengthened, obviously, but there’s more. Extending the swingarm affects suspension geometry, causing the bike to pivot up at the shock. Lowering links are installed to compensate. Sometimes these are readily available (many components Champion uses are sourced — primarily from the U.S.), but if not, they’ll have them fabricated, along with any other necessary parts. (They’ve even done one-off swingarms.) “You’re not necessarily lowering more than stock,” Haig says, “but you have to lower.” The front end is also lowered to maintain a proper relationship with the rear. Finally, the kickstand has to be shortened, and then powder coated or polished. All-in — stretched, lowered, parts and labour — that’ll run between $800 and $1,000. “It’s not a full swingarm, but it’s just as good,” Haig says. “It gives people the look. For that amount of money, it’s a pretty cool mod.”

From there, things get more complicated and costly. Don’t want extensions? Get a one-piece stretched swingarm for $2,000. For a wider-than-stock tire you need a full swingarm. A 240-section tire (the widest that’s still Z-rated) stretch kit with widened factory replica rim runs about $3,500 — though the wider tire necessitates an offset front sprocket to clear the tire. You’ll also need a new axel, brake hanger, and caliper. For a 240 stretch with matching aftermarket rims, you’re adding another two grand. For wider tires (280, 300, 330, 360) an offset sprocket isn’t sufficient; a jackshaft is needed to step the chain out far enough to clear the tire. Wider rubber also adds cost, roughly $1,000 with each size increase.

And then there’s length — which is the whole point, right? The average stretch is six to 10 inches, but you can go longer (the longest Haig has done is 18 inches). Longer stretches require the swingarm be underbraced, though you can add underbracing purely for looks, too. And within all these options, there are options; up-spec components (rotors, calipers, and coloured chains, for example) all add to the bottom line. Haig has done projects for $800. He’s done projects for $12,000.

That’s how and how much, but what about the bigger picture? It’s difficult to say exactly when and where stretching swingarms on street bikes started, but the practice clearly has its roots in drag racing, where you stretch a bike for straight-line stability to increase speed. “I think it started from drag racing in the United States and grew from that,” Haig says. Fans mimic those they admire and stretch their street bikes (no different than a Valentino Rossi fan tricking out an R1). Others — not necessarily drag fans — like what they see and stretch their own, and so it spreads.

Haig is a case in point. He first saw stretched street bikes in 2000 while attending drag races in Indiana. “Five or six guys rolled into the parking lot on stretched sportbikes and I thought, ‘What is that?’” He spent 20 minutes examining one’s innards before the owner returned and explained the process. Haig was 16 at the time. When he got his licence he had his ZX-12 stretched, but it wasn’t easy. “It took me months to have it done,” he says. “I couldn’t find parts anywhere. I couldn’t even buy a long chain. I had to buy two chains, link them together, then cut it to length.” He took the swingarm to a machinist who made extensions and then countersunk and welded them. “We had to massacre a stock arm to do it because back then nobody was doing this kind of thing in Canada, outside of drag racing.”

Since then the popularity of stretched street bikes has risen exponentially. “The stretches people are doing in Puerto Rico are nuts,” he says. “In the past year I’ve seen a lot of stuff from Dubai.” Generally speaking, he adds, Canada catches the tail end of a motorcycling fad; if it’s doing well here, it’s doing very well elsewhere. “It’s happening everywhere, all over the world, but the biggest location is still the States.”

The general motorcycling community considers stretching street bikes a practice of young urbanites, but that’s not necessarily the case. “The split between younger and older is pretty even,” Haig says. He has roughly the same number of customers in their 20s and 30s as those in their 50s and 60s. (Haig pointed out a Hayabusa being fit with a 240 stretch kit. The owner is 66.) “Younger guys want to fit in. The older guys don’t give a shit what people think. They’ve been riding for so long and had so many different bikes they just want to do something they’ve never done, have something they’ve never had.”

As for it being an urban phenomenon, Haig has a theory: “That’s partly because of accessibility,” he says. “You come to a shop like mine, we can pretty much get you anything you want, and we do stretches all the time. Go to a shop in a rural area and they don’t have the same connections and they don’t do it as often.” He says there are only two reasons to stretch a bike: for the look, or for drag racing. The majority of the looks-only stretches Champion does are for customers in the city. “Most of the guys having this done from outside the city are guys who are actually racing.” And while the vast majority of stretched motorcycles are sportbikes, Champion has also stretched Triumph Bonnevilles, Harleys, Japanese cruisers and café racers.

But the biggest misconception has to do with handling. “Some people who are ignorant of the stretched bike scene call [the owners] posers and say they’ve ruined the bike’s handling,” Danny says. “There’s so much misconception about what a stretch actually does to the bike’s handling in everyday riding situations.” Obviously, the longer the stretch and the wider the tire, the greater the impact on handling — he readily concedes that. Even so, says Danny, “with a six-inch stretch and Z-rated tires you can ride just as hard as someone on a stock bike — you can scrape a knee and everything.” (He would know; he owns both kinds of bikes.) To customers concerned about handling, Haig says this: “With a six-inch stretch you’ll ride your bike the same way you rode here today.”

“What I’ve noticed now is the majority of people like the look, but there are still a lot who knock it and hate on it,” Haig says. “There’s a big rivalry between guys who customize to go fast but don’t stretch, and the guys who stretch because they like the look.” Even if the phenomenon doesn’t appeal to you, there are elements to be appreciated, like mechanical ingenuity and execution or the sheer audacity of having done it at all. As with any kind of bike, it all comes down to personal preference — if you like it, who are we to convince you otherwise?