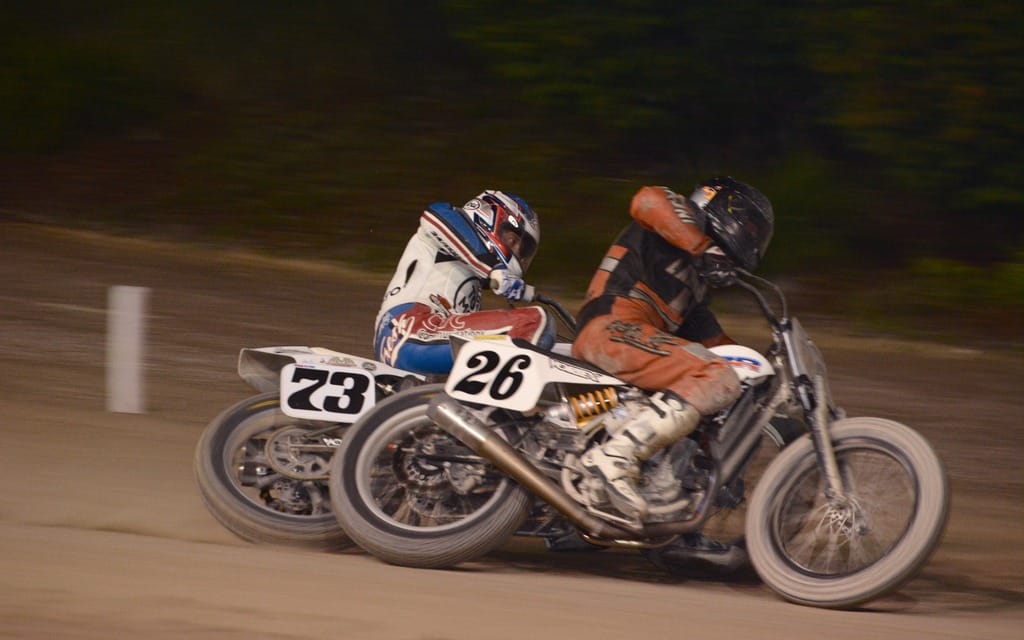 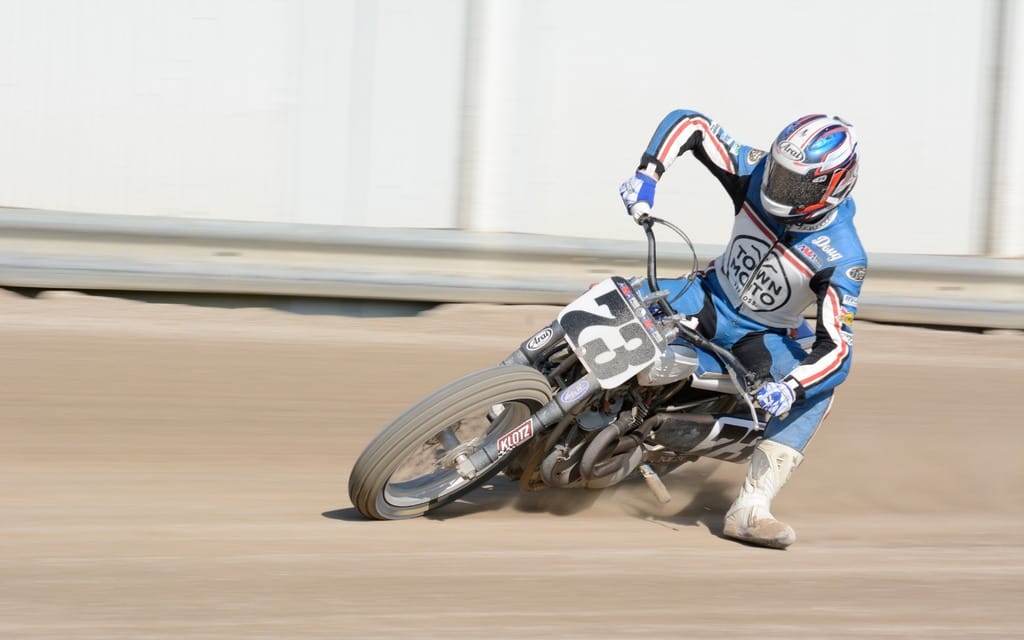 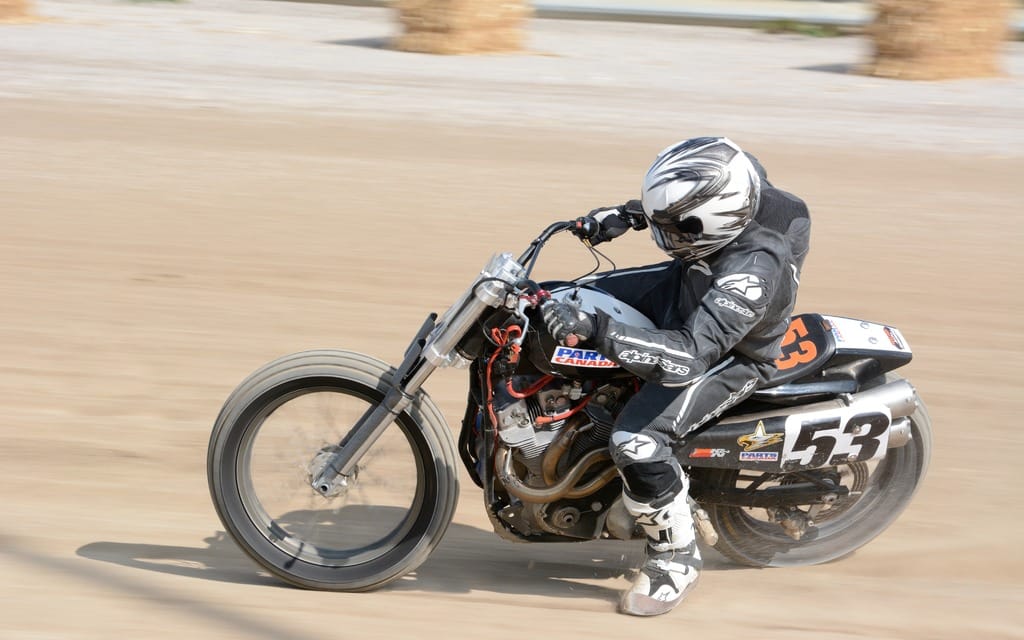 It’s him. I’m sure of it. It’s Ned Nickerson, Nancy Drew’s boyfriend. I know because I’ve read the Nancy Drew series of adolescent novels chronicling the teenage detective to my nine-year-old. Ned is walking the track between turns three and four at Flat Track Canada’s London half-mile. His posture is impeccable, his expression unflappable, and his hair blond and wavy in such a manner as to trap maximum sunshine. (It’s easy to see why Nancy, described as a “titan blonde,” dates him “exclusively.”) Doug Lawrence, a 29-year-old flat track racer from Mississauga, Ontario, is Ned Nickerson.

In a stroke of unexpected insight by the AMA Grand National Series racetrack announcer, Lawrence’s nickname is “Fresh.” (Announcers rarely stray from alliteration: Jared Mees is the Jammer and Sammy Halbert is Slammin’.) Lawrence is a child of flat track. He never considered road racing or motocross, and with his white, blue, and red leathers (and astride his similarly timeless Harley-Davidson XR-750) he looks like an ivy leaguer from 1973 that knew his mother would kick his ass if he grew his hair out.

Don Taylor is not Ned Nickerson. His all-black Alpinestars leathers match his shock of 20w50 hair. Taylor is the quintessential flat track racer. He’s not particularly tall, nor big, and he has the build of a clenched fist. And oh, can he ride. In his heat race Taylor got a so-so start (he must do this on purpose) and then surfed his XR-750 around the outside of the field to victory. (It’s important to remember that most half- mile flat track races occur on horse tracks, and since horses have one horsepower — and a good Harley 90-something — the ramifications of over aggression cannot be overstated. Highway- grade guardrails and vertical I-beams rim London and the entire track is wrapped in corrugated steel. The bales of hay that line the corners are more to assuage the fears of sensitive spectators than they are to protect the racers.)

If Lawrence is Ned Nickerson and Taylor solid small- town stock, Steve Beattie’s nature is more elusive to define. Beattie — more than any other Canadian flat tracker — gave the Grand National Flat Track Series a long, hard, painful shot. A famous U.S. flat track tuner told me that he was amazed that Beattie was still alive; he’d had that many big crashes and serious injuries. Beattie won a Grand National half-mile, back in the mid-nineties. He never won another. And he’s not the least bit shy in saying that his only win still torments him. “It was easy,” he says wistfully of that night in Michigan, and he did it on a track — a hard groove stock-car oval — that didn’t best suit his riding style.

The greatest attribute of the best Canadian flat track racers is their greatest fault: they are stylists. They love riding inches from the wall on deep pea-gravel tracks, with engines howling and with dirt cascading in high arcs from rear tires like a hydroplane’s rooster tail. It’s beautiful to watch, and fun to do (or they wouldn’t do it) but it’s not always the fastest way around a racetrack. And many of the Grand National tracks in the U.S. are miserable affairs: slippery hard-packed stock car tracks that reward riders with a steady hand and judicious throttle control. In other words, not Don Taylor.

Taylor’s run around the outside of the field in his London heat race had my skin prickly with terror. He entered corners so hard, with both ends of his bike sliding so viciously, that I was sure he was going to punch a hole in the wall and end up on a London residential street. But just when I was tempted to look away to avoid witnessing a catastrophe, you’d hear it, a bass-note bellow from his XR that would signal that the power was back on and that he’d righted the entry slide and charted a course to the corner’s exit. And on the way to that victory, a beautiful moment (flat track is full of them — why aren’t you going to the races?). Taylor, on his way up through the field, slips between the wall and Beattie like a wedge of cheese, then takes his left hand off the handlebar and places it on Beattie’s lower back. It’s an intimate gesture, what a man does for his lover when he opens a door with his right hand and then gently guides her through the opening with his left hand just grazing the small of her back. In Taylor’s case it’s an “I’m right here” signal to Beattie not to move an inch to the right. Not an inch.

That Beattie is un-retired and riding is a surprise. (His retirement “wasn’t by choice,” he says, but because of injury and because his wife — you’ve got to feel for her — preferred a living husband.) He gave it up in his mid-30s, and now, at 42, he’s fitter (he’s a personal trainer and runs a suspension tuning business) and wiser. You get the sense from Beattie that retirement was misery. The man’s a racer. He tried vet-class motocross but that didn’t satisfy. Then he pulled his XR-750 from the shed and packed for the Leamington, Ontario, half-mile. But what about your wife? “I told her that she can stay at home and be miserable or she can come along.”

The old Beattie was fearless. And flawed. Like Taylor is today. But the new Beattie is controlled (he admits to having less raw nerve) and calculated. (And he can text — Beattie, in a cheeky move, sent Taylor a note the week before the London race, asking how he was going to do “with that big right wrist of yours” when the track became rough and slippery.)

As they line up for the start of London’s expert open final, Lawrence feels the pressure. Lawrence needs to win. And just because he had a Steve Beattie poster on his wall as a kid (I’m assuming it’s been taken down) doesn’t mean that he’d take any pleasure in second place. And Beattie isn’t even running his XR-750 (aside from being the sexiest objects in the history of everything, XRs are an ancient design prone to mechanical fatigue). Beattie is on a Kurt Biegger-prepared Honda 450 cc single slotted into a purpose-built flat track frame. Beattie was ripe for the picking. Or so it seemed.

By half distance Beattie was riding with flawless control at the front. Lawrence, after a so-so start, had passed Taylor (who after the race, in a moment of surprising-for-a-racer candor, confessed that he didn’t have “the best throttle control”) Lawrence honed in on Beattie as the race wound down, and then with one lap to go, Lawrence got a great drive off corner four and was inches behind Beattie. Lawrence was coming. Beattie knew it. We all knew it. But the rider that was about to be lapped didn’t know it. The flagman should have given him the blue you’re-about-to-be-passed flag, but he didn’t. Beattie backed off a bit, so as “not to spook the lapper.” Then Beattie heard Lawrence’s Harley. “I’m not going to let him do this,” Beattie said, and as Beattie cut below the lapped rider, Lawrence cut beneath Beattie, who was not going to let Lawrence punt him out of the way — if Beattie was going to be knocked down, he’d take Lawrence with him. “Let the guy in third place win this,” Beattie said.

Lawrence ran into Beattie and plowed into the dirt. Beattie stayed up. Then the lapped rider — poor sod — plowed into Lawrence’s prone XR and his body shot up into space. Lawrence jumped up and walked away from the crash, his body language showing his disbelief of the evidence. The lapper wobbled on unsteady legs to the hay bales and sat down. It was over. Beattie had won. On his cool-down lap, Beattie trolled past Lawrence (who was still at the crash scene) and extended his arm and turned his palm to the heavens asking the rhetorical question that works in any language and from MotoGP to club racing: dude, what were you thinking?

Later, after the victory lap, Beattie foud Lawrence in his pit. Everyone paused. Beattie moved in close. “We’re good,” he said to Lawrence. To which I’ll add this: very, very good.