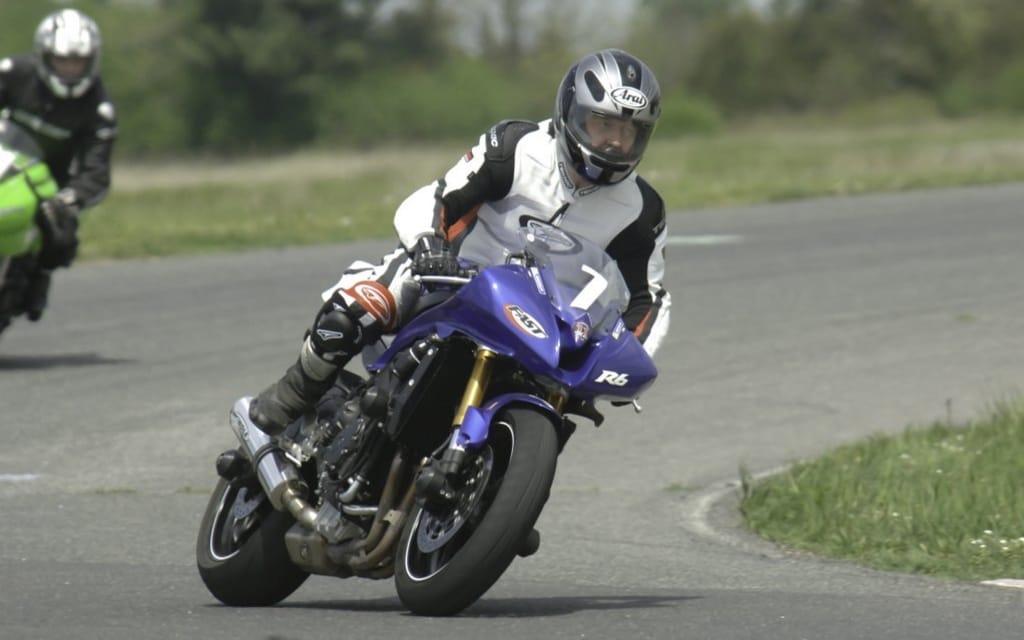 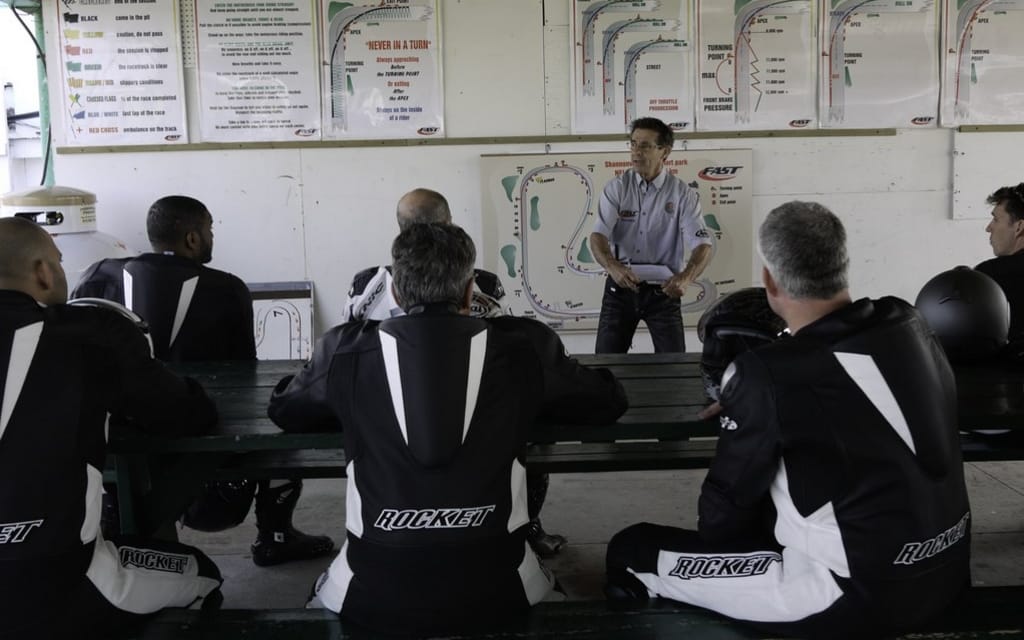 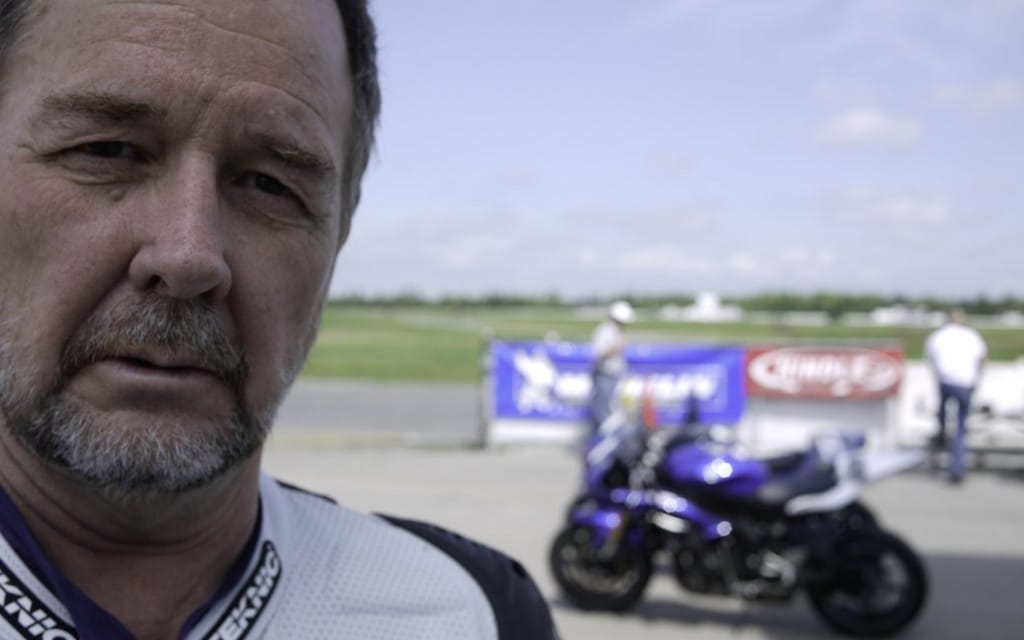 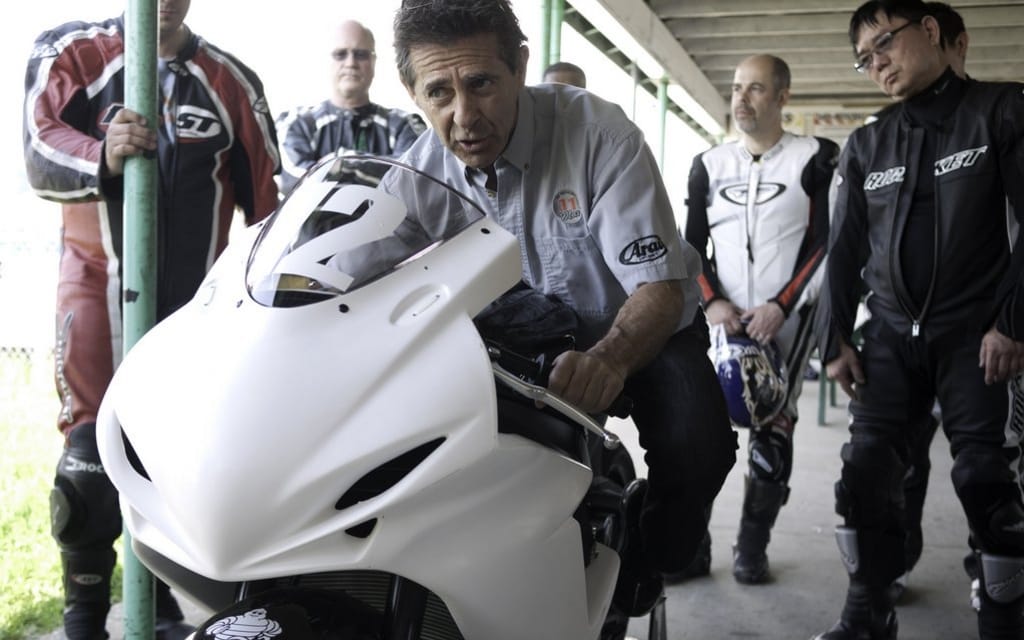 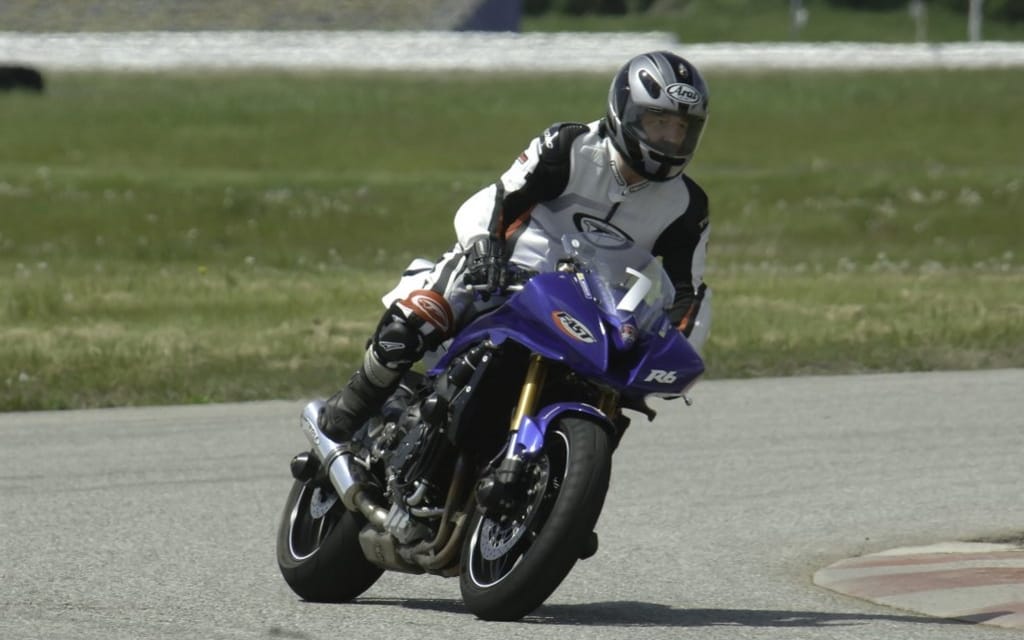 Look Where You Want To Go. And Go There FAST.

What they don’t tell you when you sign up for Michel Mercier’s riding school is that the really hard work takes place before you get on a bike. I sat in a dressing room at the Shannonville race track and listened to a dozen men struggling into Joe Rocket and Teknic leather race suits that were probably tighter than anything they had tried on in decades. Hunched over and grimacing, one 45-year-old wondered if his suit was too small. But no, it wasn’t. He zipped up and walked, hunched over, downstairs to the classroom. It looked painful.

The classroom was an open area next to the short Nelson track at Shannonville Motorsports Park near Belleville, Ontario. Michel Mercier, who won three Canadian Superbike championships in the 1980s and has made a successful retirement out of running the Fast riding school, had the group of about 40 riders split into three: fast, medium, and beginner, and I had safely chosen the middle group. This was a Phase 1 Fast course, for beginners, but I was feeling nervous. I wasn’t sure I could get comfortable on a track, at any kind of speed.

The first classroom session was held before we put on the leathers, and Mercier conducted it like an entertainer working a room. He was engaging, and he’s been running this school for so many years that his lessons have the fluidity of polished performances. He talked about counter-steering and setting your speed before a corner, entering the corner at the right point, braking (don’t even use the rear brake), and passing.

He was also funny, and the group, ranged around tables and listening intensely, enjoyed him as he talked about vision. “Where do you want to go?” he said, and he pointed to the left. “There!” but he shuffled to the right, toward an imaginary ditch that he stared at. “Where do you want to go?” he said again, and pointed to his left but looked at the ditch to his right, and kept on heading toward disaster. He was clowning, but the lesson was serious, and the riders will remember it.

In our leathers, we headed down to the track, got on the bikes. I sat on a Yamaha R6, still feeling nervous. Would I be able to learn the track, would I be slower than everybody, would I screw up and crash? The Yamaha was small under me. The instruments were taped over; he wanted us to listen to the bike, not stare at the tach. I found the R6 easy to ride slowly, not as high-strung as I thought it would be, and we set off behind an instructor. Each instructor took two or three riders out for a number of laps, and when we came back to the long front straight, the guy behind the instructor raised his hand, moved to the right, and let the rider behind him move up to the instructor’s tail. I was the first guy behind the first instructor for our middle group (the fast group has already lapped and pulled in), and as he accelerated onto the front straight, I stayed close. He bent into turn one, turn two, and kept a moderate speed. It was easy enough, and when we got back to the front, I raised my hand and pulled to the right.

When we pulled in after our circuit learning laps, I was no longer anxious. We pulled off our jackets (those of us who could wriggle out of them, anyway) and sat at tables, and Mercier explained things: where to look (only as far as you need to; this isn’t the street and no taxi driver is going to turn left in front of you), where to brake, where to accelerate, what gear to use (second or third, depending on the corner in front of you), what to do if you started motocrossing (that is, if you went straight in a curve and ended up on the grass). About three percent of riders crash, he said, and that usually happened after they had resisted warnings to slow down and either lost the front, or slid the rear. Stay in control, have fun, and don’t crash, he said.

We went out again and practiced braking. Mercier told us to downshift as we braked, let the engine pull the bike’s speed down. When we went out to try the braking manoeuvre, accelerating through two gears to a pink traffic cone, then shutting down, down-shifting, and braking, I was uneven, I didn’t release the clutch lever soon enough and I used the rear brake. There was an instructor at the cones; he told me to leave the rear brake alone. There were more cones laid around the track, I tried again, got it wrong. We circulated, doing the braking practice many times. Finally, I stopped at the last instructor on the front straight, and I recognized him: Andrew Nelson, a very fast road racer. “That’s a lot better,” he told me. I felt like I’d accomplished something.

More lessons with our jackets undone, Michel Mercier explaining things, then back out for laps, and finally, we were set loose. On our first free lapping session, I passed one rider quickly, and then someone in front of me crashed. We were red flagged and had to stop while he and the bike were picked up. Not much time passed and we were back out, and now I wanted to pass more people. I came on a group of four and slipped past all of them on a short straight, braking hard into the corner, but making it smoothly, and then another on the next straight, and we were back in for more lessoning. We met with an instructor who read from a notepad, tells each of us what we were doing wrong. I was uneven on the throttle, missing some corner apexes. Another guy was not turning in at the right points, not riding the correct position on the track. He hadn’t been riding long.

Now Mercier talked about something new: hanging off. It changes the bike’s balance, so you don’t have to lean over as much in a curve. He sent us out. The instructor told me I was not hanging off enough. He told the other guy that he still needed to improve his lines. The guy nodded; he would try. Back out, I followed two guys down the first and second straights, then I rolled past one, and there was one rider in front of me and two full laps to go. I looked for a place, but every time we got to a straight, he accelerated hard, and I couldn’t do it. I was not going to pass him on the brakes, and we were both entering corners and hitting apexes on what seemed like good lines. I was hanging off more deliberately, and I stayed on his tail, but I couldn’t pass him. I followed him to the podium, and after we pulled in, he took his helmet off. It was the guy who couldn’t hit his turning points two sessions earlier. “We were racing,” I told him. “Did you know that?” He didn’t even know I was behind him. But that was okay. I knew it: we were racing. And I lost, but there’s always a next time.

Go to fastridingschool.com for schedules and info. Phase one courses are slated for Aug. 8 and 22. Price is $559 with riding gear and bike supplied (it’s less if you use your own bike and gear). If you’re smart, you’ll cough up another $120 for insurance.