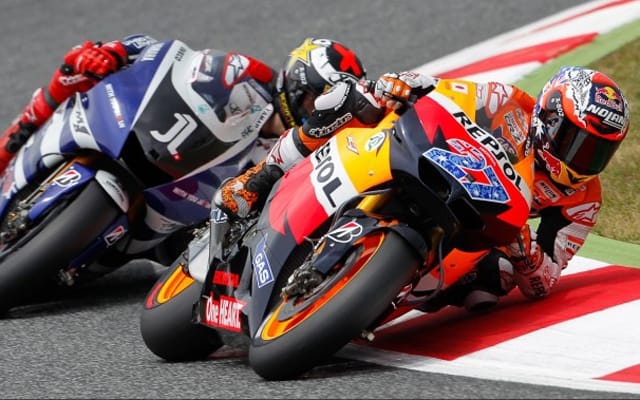 Casey Stoner took his third victory of the season in Catalunya on Sunday and moved to within seven points of the 2011 MotoGP World Championship lead. The Australian finished 2.4 seconds ahead of defending champion and points leader Jorge Lorenzo, while Lorenzo’s factory Yamaha team-mate Ben Spies followed in third, capturing his first 2011 podium finish. After overtaking Lorenzo at the end of lap one, it looked like Stoner might completely run away with the race, but light rain during the latter half forced Stoner to be somewhat conservative. Stoner’s Repsol Honda team-mate Andrea Dovizioso finished fourth, holding off his fellow countryman Valentino Rossi to a fifth place finish. Pole sitter Marco Simoncelli, who arrived at the track under police protection after receiving death threats for causing local hero Dani Pedrosa to miss the Spanish GP, got off to a bad start and, perhaps chastened by his scolding from Dorna about the Pedrosa incident at Le Mans, relinquished his customary aggressive style and settled for sixth. Pedrosa was not fit to compete at Catalunya after undergoing surgery to repair a broken right collarbone shortly after the Le Mans race. Also missing the from the grid at Catalunya due to a broken collarbone was satellite Yamaha rider Colin Edwards. The Texan’s 141 MotoGP race streak ended after crashing heavily during practice on Friday and undergoing surgery the following day.

Edwards claims he’ll be back for the next race at Silverstone on June 12, while Pedrosa’s participation at the British Grand Prix is still in question.