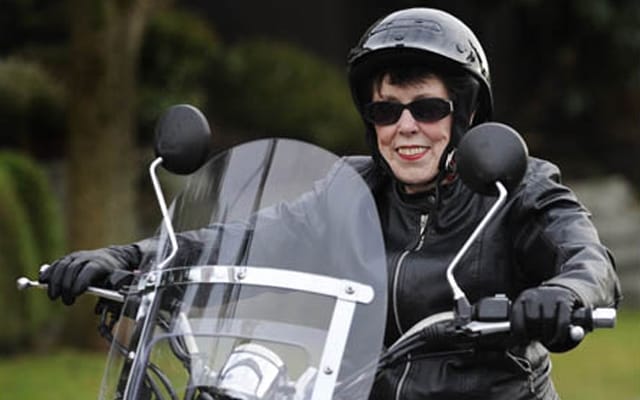 BC Granny Preaches the Joys of Riding

Six years ago, White Rock, BC resident Joni Miles dumped her husband and bought her first motorcycle—not an extraordinary act necessarily, until you realize that Miles was well past retirement age at the time.

This weekend Miles will be one of the featured speakers at She Rides Nite during the Vancouver Motorcycle Show at the TRADEX in Abbotsford.

“Mostly I tell my story and encourage the women who are thinking about it to at least go and try, take a course,” says Miles, the only female member of an over-60 motorcycle club.

“You don’t need a lot of strength to do it. You don’t have to be a biker type. It’s really become a feminine experience right down to the clothes and the helmets.”

Miles recently switched from a Yamaha V-Star 650 to the lighter weight Virago 250, but pines for a pink Harley she once saw at a show, with pink helmet to match. Most importantly though, she wants to keep riding.

“I will ride for as long as I can hold a bike up,” she says.

The Vancouver Motorcycle Show is on until Sunday. Go to vancouvermotorcycleshow.ca for full details.