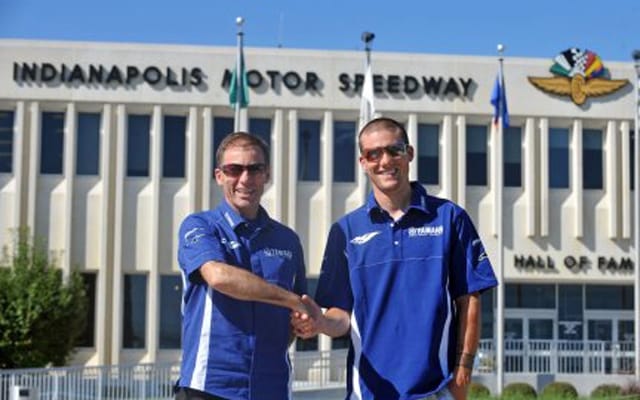 As expected, Yamaha has announced that MotoGP rookie Ben Spies, currently riding for the Yamaha Tech 3 satellite team, will move to the factory team for the 2011 season. The 26-year-old American, winner of the World Superbike Championship with Yamaha in 2009, is currently the leading MotoGP rookie and the top satellite rider, lying seventh in the championship, and the only privateer rider to stand on the podium (Silverstone) so far this year.

“We’re delighted that Ben will join the factory team for next season,” said Lin Jarvis, Managing Director of Yamaha Motor Racing. “Ben has shown great promise in his first ten MotoGP races. He has learnt rapidly and recorded strong results, including a well-deserved podium finish at Silverstone – impressive for someone in their first full season.”

Spies had this to say of the big switch: “My first year in MotoGP has been a great learning curve and for that I have to thank Herve Poncharal, all the team at Tech 3 and especially my American mechanics who have stuck by me throughout this great journey so far. Having previously been to only four of the ten tracks to date, I have to be pleased with where I am and with having achieved my first podium so soon. I’m especially pleased that Yamaha have recognized the potential in me and given me the opportunity to step up to the Factory Team so early in my GP career. I believe that by working closely with the Yamaha staff and my mechanics we will be able to help develop the M1 and make the next step of challenging for regular podiums, followed by future championships.”

Spies of course will be taking Valentino Rossi’s place on the factory Yamaha team alongside current championship leader Jorge Lorenzo. It’s expected the re-signing of the flamboyant Spaniard—though still playing coy saying, “For my side, I still haven’t signed with Yamaha, but we all hope that it comes very soon.”—will probably be announced at the Motorland Aragon GP in Spain next month.