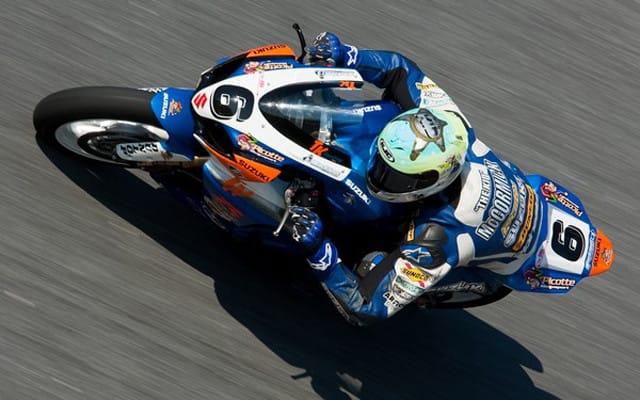 McCormick Signs On for AMA Superbike Round 2

Brett McCormick has gained chance this weekend to further exhibit his skills in AMA Superbike competition. The 18-year-old from Saskatoon has signed a deal with Celtic Racing to ride in place of PJ Jacobson who broke his hand in a pileup during the initial start of the Daytona 200 on March 5. McCormick, who road his self funded TK Picotte Racing Suzuki  GSX-R 1000 to a solid 8th place finish in Superbike race 2  at Daytona, will now be at the controls of a LeoVince powered Suzuki GSX-R 1000 for round two at Auto Club Speedway in Fontana, California.

“It’s great to be racing this weekend at Fontana with the Celtic Racing team” said McCormick. ”I’m comfortable on the Suzuki GSX-R 1000 and Celtic Racing has a proven history of having top bikes and a sharp crew. It’s going to be my first time racing at Auto Club Speedway but I’ll be putting my head down early and getting up to speed as fast as I can. Thanks to Barry, Gemini, and Pascal for all their assistance and I hope to get a good result for all the folks back home!”

Like Daytona, round two of the AMA Superbike Championship at Fontana is a double-header, with races on Saturday and Sunday. SPEED TV will have coverage on both days.