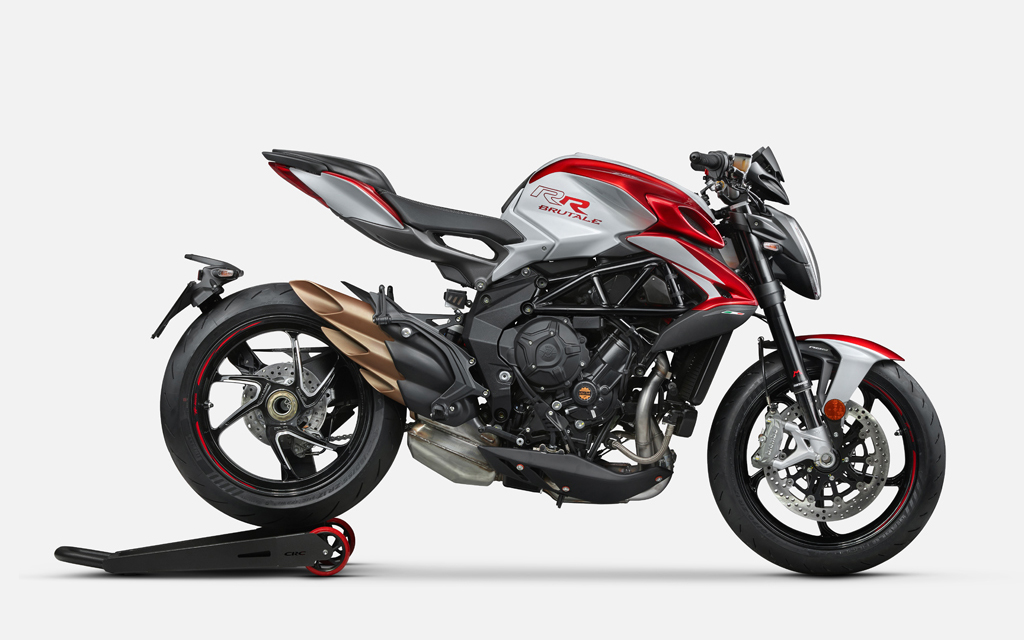 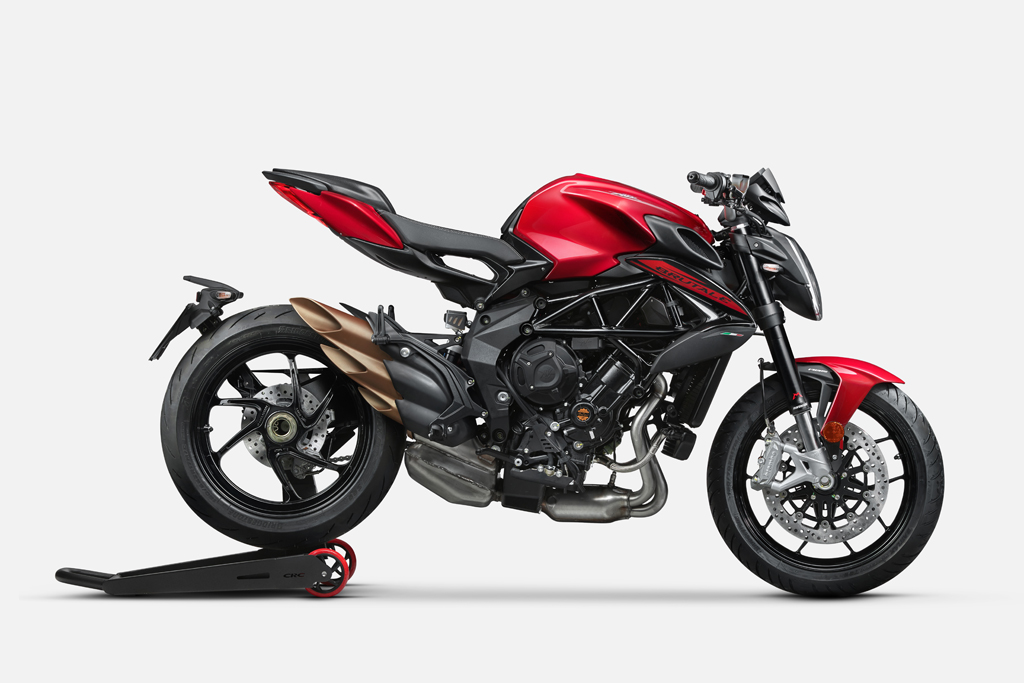 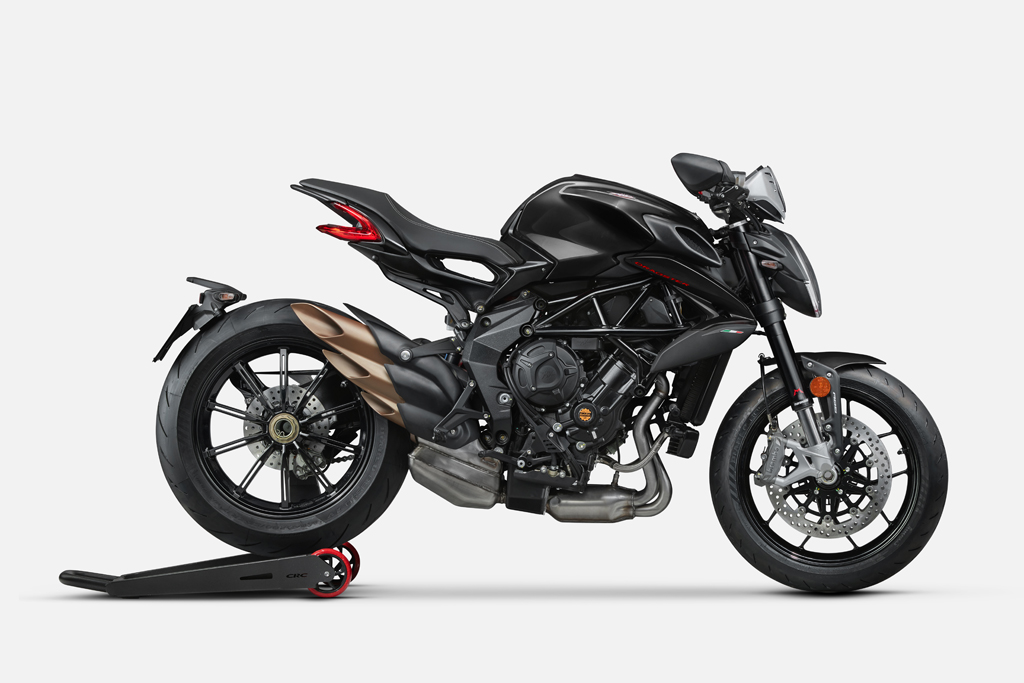 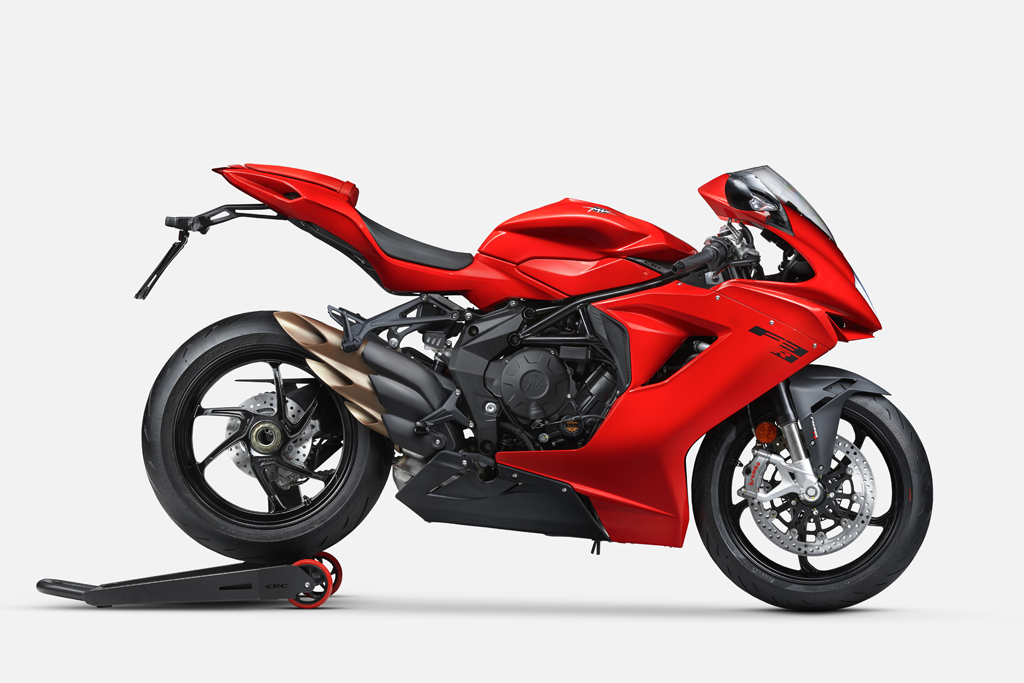 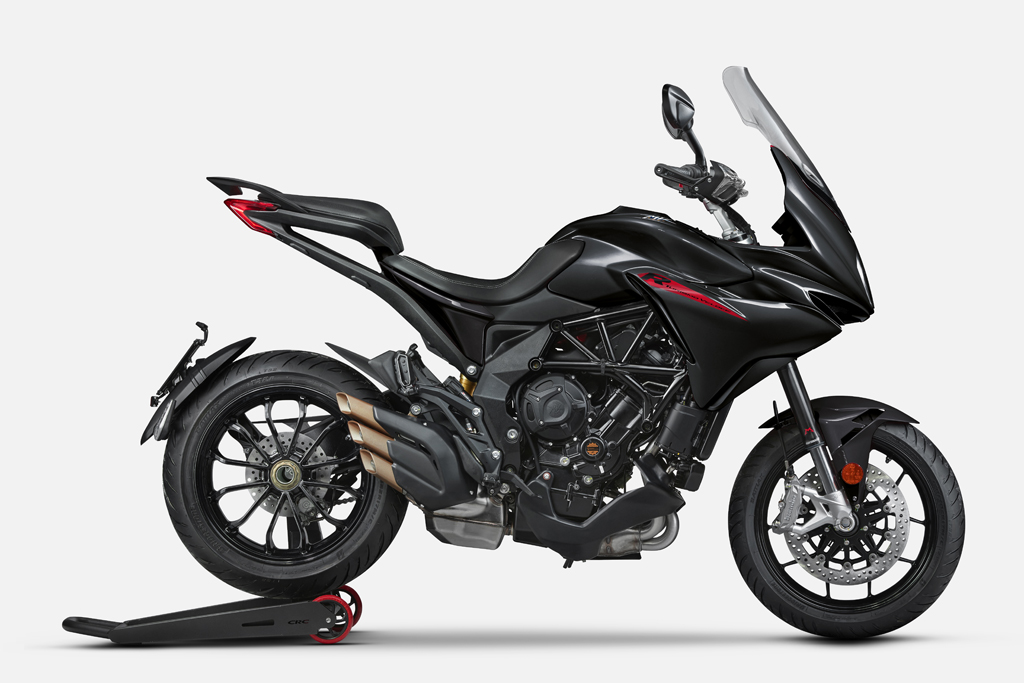 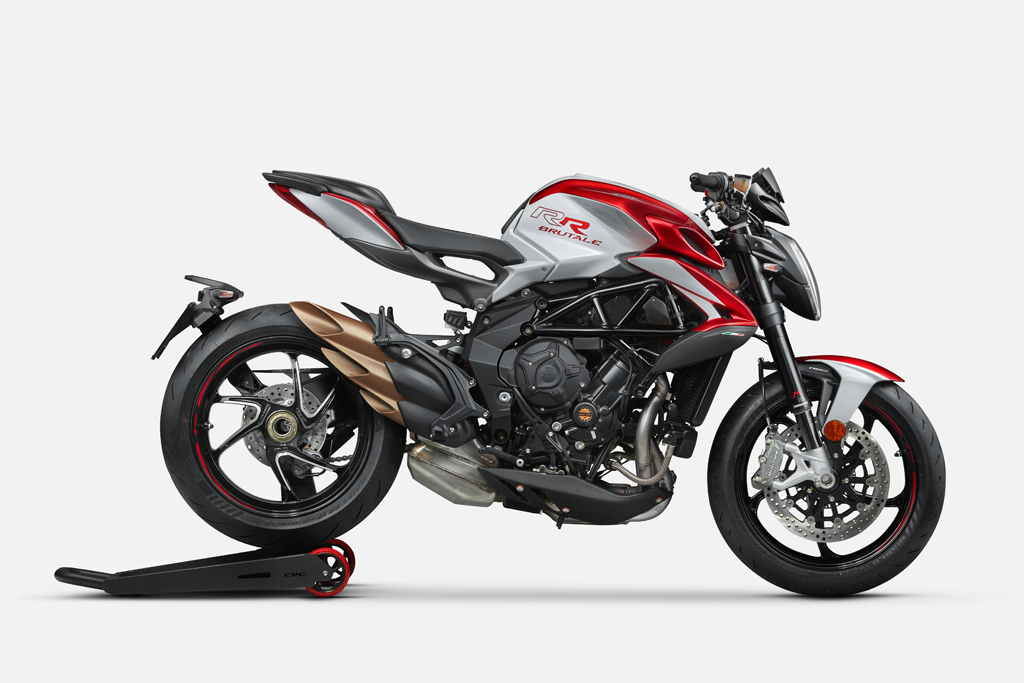 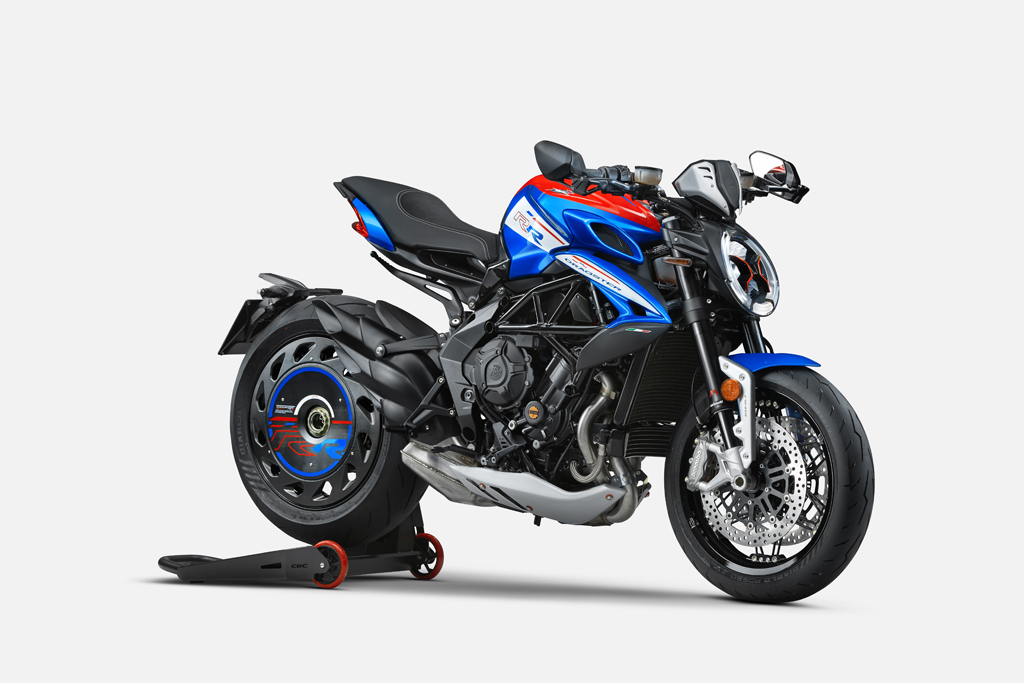 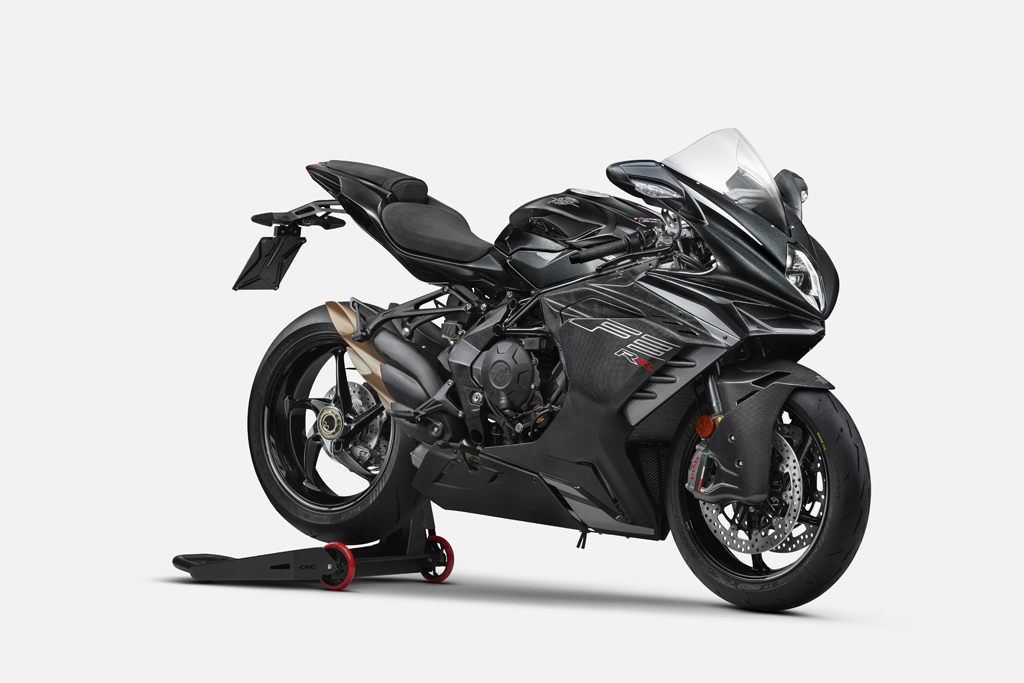 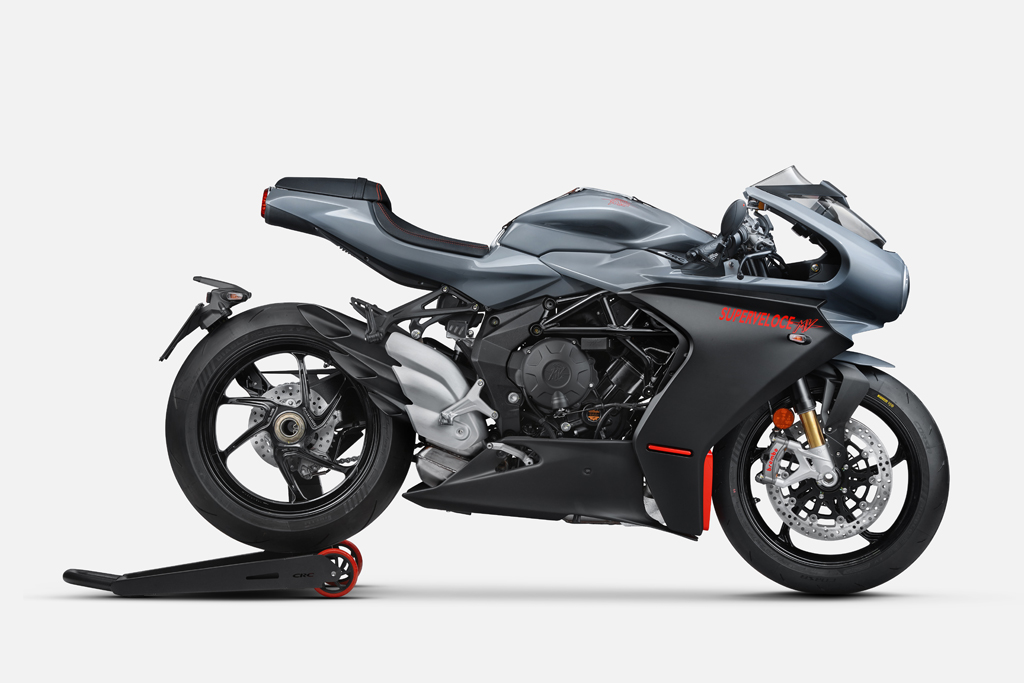 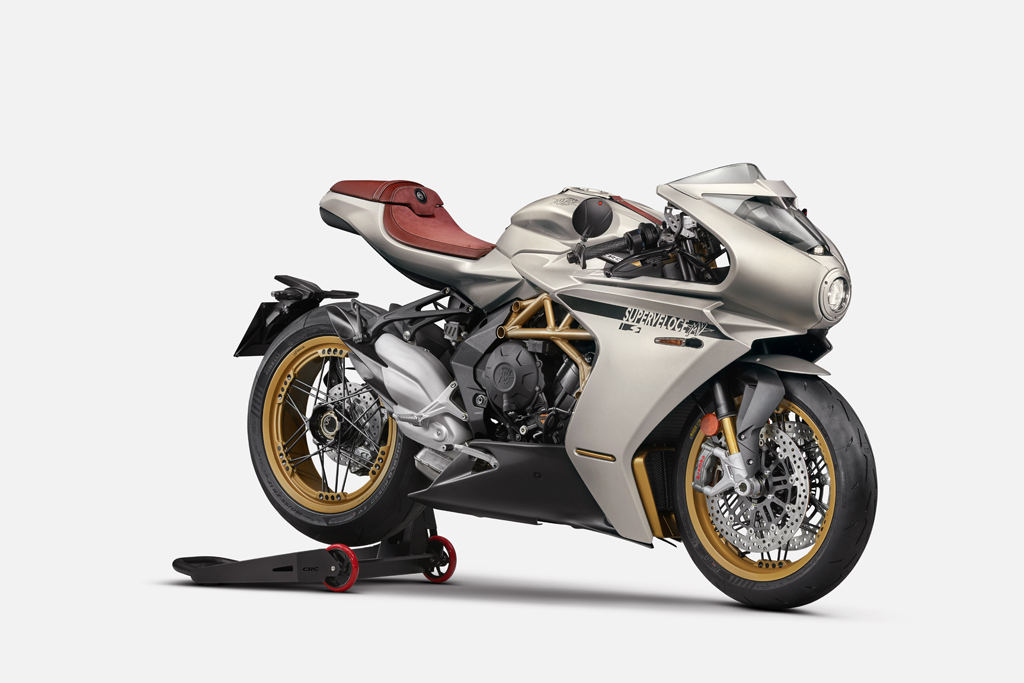 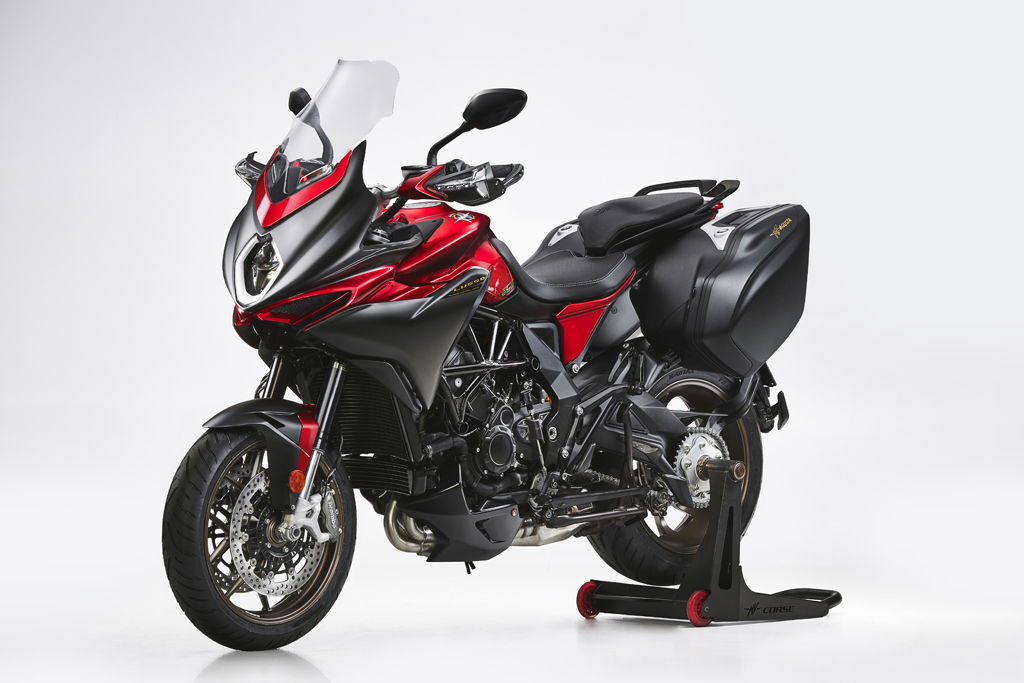 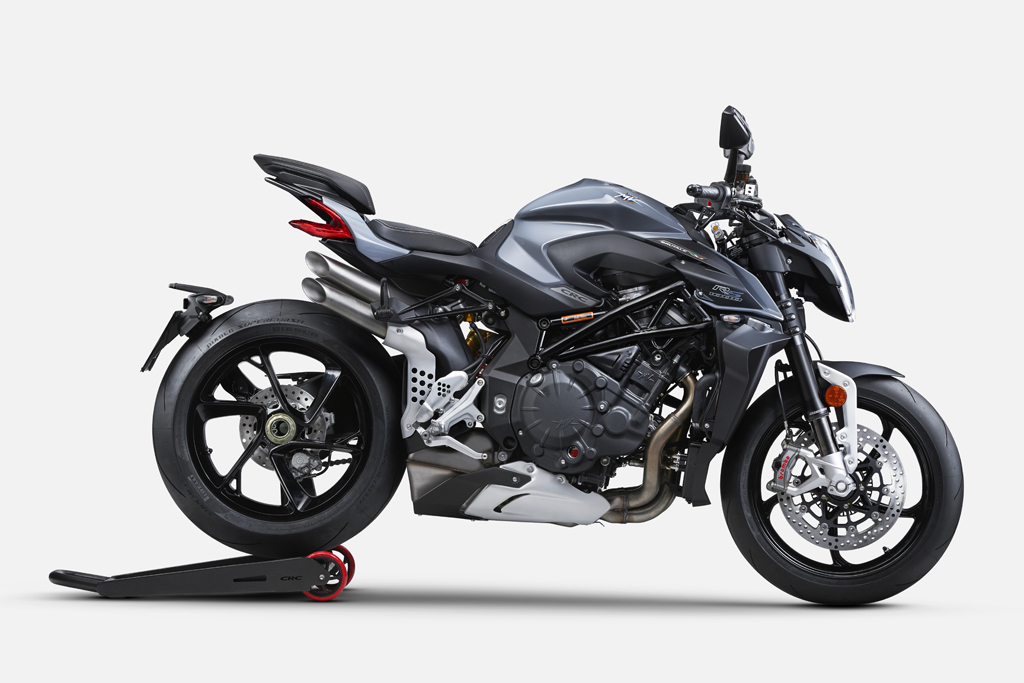 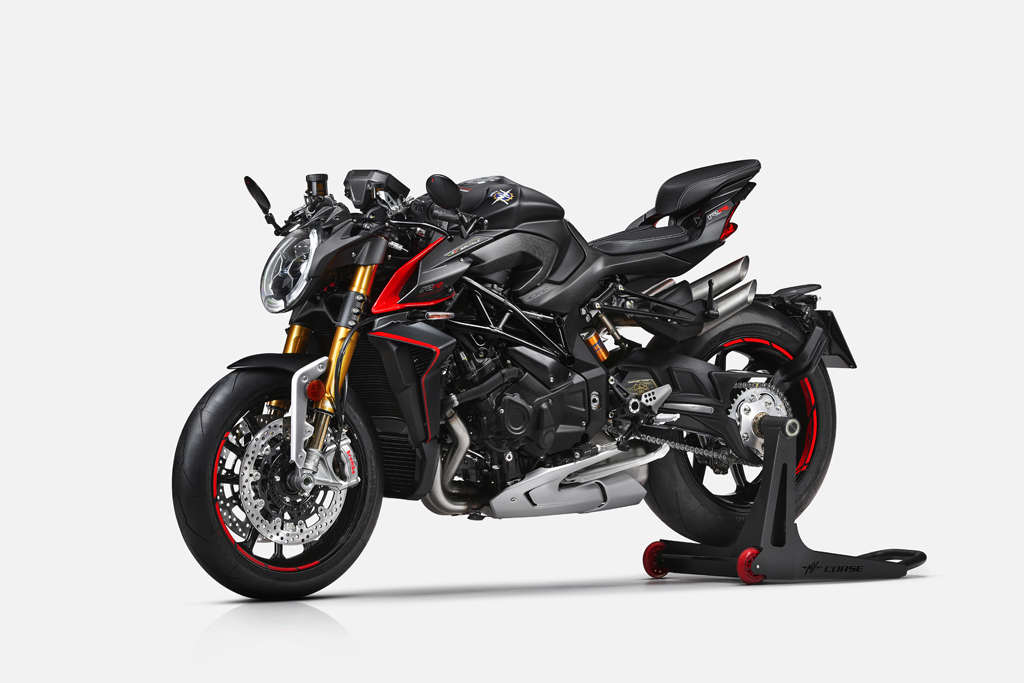 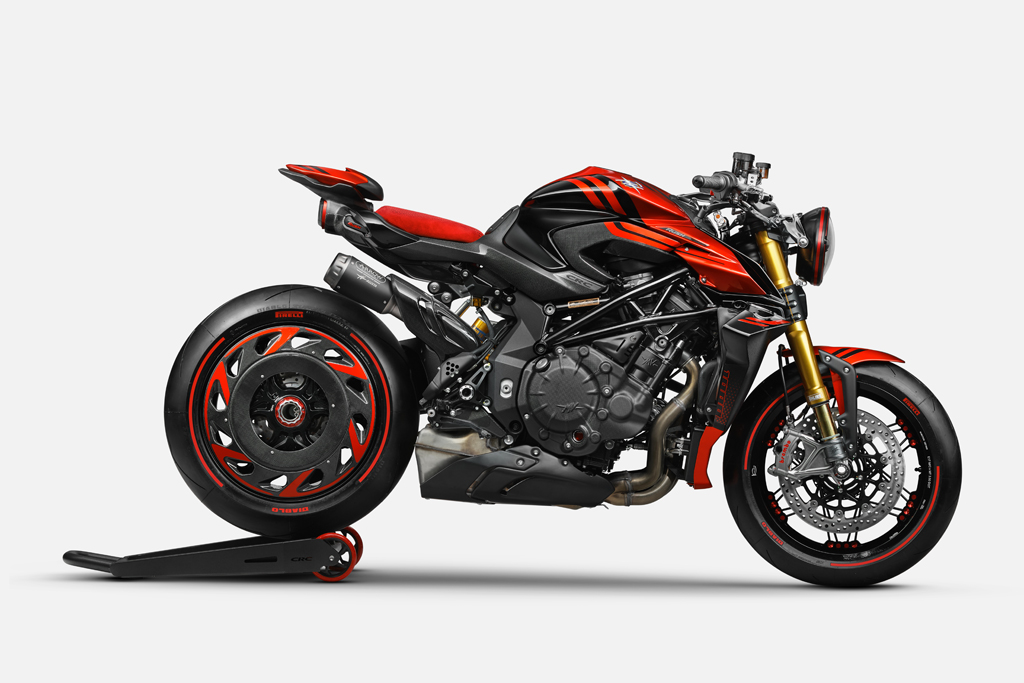 Discover the 2023 models of MV Agusta

For MV Agusta, 2023 marks a true turning point in the name of evolution and technology. The R package makes its début on all the three-cylinder bikes: Brutale, Dragster, F3, and Turismo Veloce flaunt new colours and lots of new features. The new range of three and four cylinder bikes, even more complete and exclusive, finalizes an exceptional development path which has produced astonishing results, particularly in terms of riding thrills.

The electronic throttle control has been entirely redesigned to make using it even more intuitive and gradual, without sacrificing the responsive action that is an absolute must for a sport bike throttle control. The new double return spring and especially the 6° negative rotation simplify throttle management and allow the cruise control to be deactivated without braking: simply close the throttle. The negative rotation also reduces the risk of involuntary engagement when the road surface is particularly bumpy, all to the advantage of comfort. At the same time, the operating algorithms have been upgraded for a superior riding feeling.

A new rider’s seat has been introduced on the Brutale R and Brutale RR, whereas the saddle on the Dragster R and Dragster RR has been changed entirely. Thanks to new development and design tools, as well as the use of 3D Mesh materials, comfort has increased drastically. To make any trip, from a city commute to a long trip on the weekend, a pleasant and comfortable adventure.

The instrumentation focused on the 5.5” TFT panel is one of the main interface points between rider and bike. For 2023, the software is updated and evolved to provide greater ease of use, in addition to the advanced connectivity, with navigation Turn-by-Turn, platform that has been further improved. The equipment includes the Mobisat geolocalised anti-theft system (with the exception of Dragster R and Turismo Veloce R).

The constant development path – one of MV Agusta’s fundamental values – also focused on the braking system. Brembo M4.32 monobloc front callipers come standard on the Brutale RR and the Dragster RR. The higher level of stiffness of the callipers improves both modular operation and power, also achieving a significant reduction in weight to the tune of 200 grams. On the F3 R, the F3 RR, the Superveloce, and the Superveloce S, the front callipers are Brembo Stylema M4.30 with Brembo PR 16/19 radial master cylinder. Overall, the new equipment increases braking power and reduces the weight by a full 300 grams.

Rear brake modular operation has been improved on the entire 3-cylinder range thanks to upgrades to the hydraulic circuit, increasing the hydrostatic pressure in the system. The result? Improved feeling during use.

Introducing new OEM tyres, respectively Pirelli Diablo Rosso IV and Diablo Rosso Corsa IV. The Continental MK100 ABS has also been upgraded, with refinements made to the cornering feature in order to provide an even more precise and safer response in all conditions.

THE R FAMILY, THE GATEWAY TO THE MV AGUSTA WORLD

The new R family, which replaces the Rosso, was conceived as an entry-level offer to the MV Agusta world. The greater availability of colour schemes, focused on red and black in various combination, is just one of the new features for the Brutale R, Dragster R, F3 R, and Turismo Veloce R model.

The sporty F3 R joins the 2023 range with new graphics and the glossy Ago Red colour scheme. A new Full LED front light cluster makes its début, complete with DRL and a pair of futuristic headlamps for low and high beam. The LED turn indicators have been redesigned and inserted in rear view mirrors that are also brand new. The rear turn indicators are now LED. The fork has a TIN coating, whereas the OEM tyres are Pirelli Diablo Rosso Corsa IV. All the improvements already offered on the other models are confirmed here as well, specifically the redesigned Ride-By-Wire system featuring negative rotation to favour throttle modulation and deactivating cruise control without braking. The braking features new equipment in the form of Brembo M4.30 Stylema front callipers.

The Turismo Veloce R is available in matt black (Metallic Carbon Black) and in the classic red and black combination (Metallic Madness Red Gloss and Metallic Carbon Black Gloss). The rider saddle has been lowered to make it even easier to reach the ground and comfort has increased thanks in part to the wider windscreen and the longer gear ratios.

The new Surreal White/Fire Red colour scheme with glossy finish makes its début, whereas the highly successful Fire Red/Intense Black combination has been reconfirmed. Some of the noteworthy main upgrades include the Pirelli Diablo Rosso IV tyres, the Brembo M4.32 front brake callipers, the revamped Ride-By-Wire system, the new rider saddle, the fork with DLC treatment, the Continental ABS with optimised Cornering, the Full LED front light cluster, also with Cornering function, the instrumentation with updated software and improved connectivity.

Three colour schemes are available for the model that mounts the Rekluse clutch, developed in collaboration with MV Agusta and which lets you forget about the left lever: Ago Red/Mica America Blue, Fire Red/Intense Black, and Metallic Pearl Yellow/Intense Black. In addition to the new features on the Brutale RR, there is now a brand new front wheel rim with thicker spokes, an even more popular design piece in terms of finishing and materials, and an aggressive rear wheel cover in Rush style which enhances, although partially covering it, the lightweight wheel rim in forged aluminium.

The supersport bike celebrates Bahattin Sofuoglu’s victory in the European WorldSSP Championship with two spectacular colour schemes: one, more classic, combines Matt Fire Red and Matt Metallic Dark Grey. The other breathes life into an uncompromising combination of Metallic Carbon Black and Metallic Dark Grey. The fork benefits from TIN surface treatment for smoother action. The Full LED light cluster is new, as are the rear view mirrors and the turn indicators. The rider footpegs are CNC machined. The racing kit, which guarantees 8 more horsepower, includes a dedicated CNC fuel cap, the passenger seat cover, the ECU with racing map, and the lightweight Akrapović exhaust muffler, approved for street use.

The magical Nardo Grey/Matt Metallic Carbon Black/Ago Red and Ago Red/Ago Silver colour schemes project the Superveloce into the future. The main upgrades include the fork with TIN treatment, updated Ride-By-Wire and Continental ABS with Cornering function, Pirelli Diablo Rosso Corsa IV tyres and braking system with Brembo M4.30 Stylema front callipers and a Brembo PR 16/19 radial master cylinder. The colour schemes for the Superveloce S are monochromatic on a silver base (Silver Iridium) with gold frame and wheel rims (Matt Gold) and on a black base in two shades (Metallic Carbon Black and Matt Metallic Carbon Black), also with Matt Gold frame and wheel rims. The racing kit includes the fantastic three-muffler Arrow exhaust approved for street use – a true touch of refined classic style – the ECU with dedicated mapping, and the tail cover in fibre carbon.

There are upgrades for the Turismo Veloce Lusso SCS as well, breaking into 2023 with two colour combinations: Metallic Carbon Black/Matt Metallic Dark Grey and Fire Red/Matt Metallic Dark Grey. Fitted with semi-active Sachs suspension to the advantage of comfort both in the city and over long distances, it has been updated like the entire range with the introduction of the electronic Ride-By-Wire throttle control and other upgrades on the Turismo Veloce R such as, for example, the wider windscreen and the lowered saddle.

There are plenty of upgrades for the four-cylinder range comprising Brutale RS, Brutale RR, and Rush.

The engine has been updated with the arrival of the countershaft unit which allows a 54% reduction of the second order vibrations, all to the advantage of comfort and reliability. The valve tappets, like on the three-cylinder engines, have DLC treatment to reduce internal friction and improve performance. The profile of the cams has been revamped to optimise torque availability. The radial valves are made of titanium.

On all the four-cylinder bikes, the new electronic Ride-by-Wire throttle control with 6° negative rotation drastically improves the feeling of the throttle, making control of the bike more intuitive and immediate. Credit also goes to the new control algorithms. further refined to provide a response worthy of a supersport bike, but without being too abrupt. In the new configuration, the throttle control, along with the new control management, allows cruise control to be deactivated simply by closing the throttle, whereas braking was previously required.

The instrumentation, focused on the 5.5” TFT panel, also benefits from an overall improvement thanks to the software upgrade, also to the advantage of the connectivity features. The Mobisat anti-theft system with geolocalisation lets you sleep more peacefully at night. As do the inertial platform and the Continental Cornering ABS, both upgraded to provide the utmost in safety.

The most versatile of the 4-cylinder Brutale bikes flaunts the elegant Nardo Grey/Matt Metallic Dark Grey colour scheme and the classic version on a red base, Ago Red with contrasting Metallic Dark Grey elements. The most significant upgrade on the engine is undoubtedly the countershaft, which has positive effects on comfort and reliability because fewer vibrations ensure a longer operational lifespan for the components, especially the electronics. The Marzocchi fork with DLC surface coating stands out for its best-in-class smooth action.

The 2023 colour of the Rush combines Mamba Red 2.0 and Intense Black. One of the many details that make the Rush a truly unique model is the support bracket for the front light cluster, made in aluminium. Thanks to SLM (Selective Laser Melting) technology, it gives this model a truly exclusive touch. Last, but not least, the kit that comes with the Rush is a true treasure trove: Arrow muffler with carbon fibre cover, ECU with dedicated mapping, carbon forged rear wheel cover, 24-spoke front wheel rim, and CNC machined fuel cap. And much more.