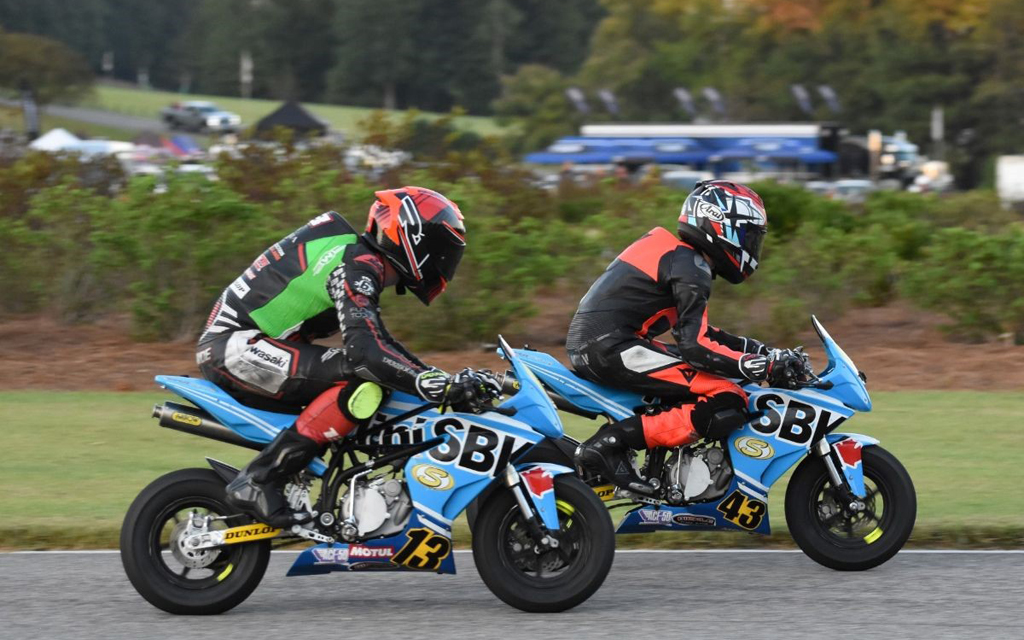 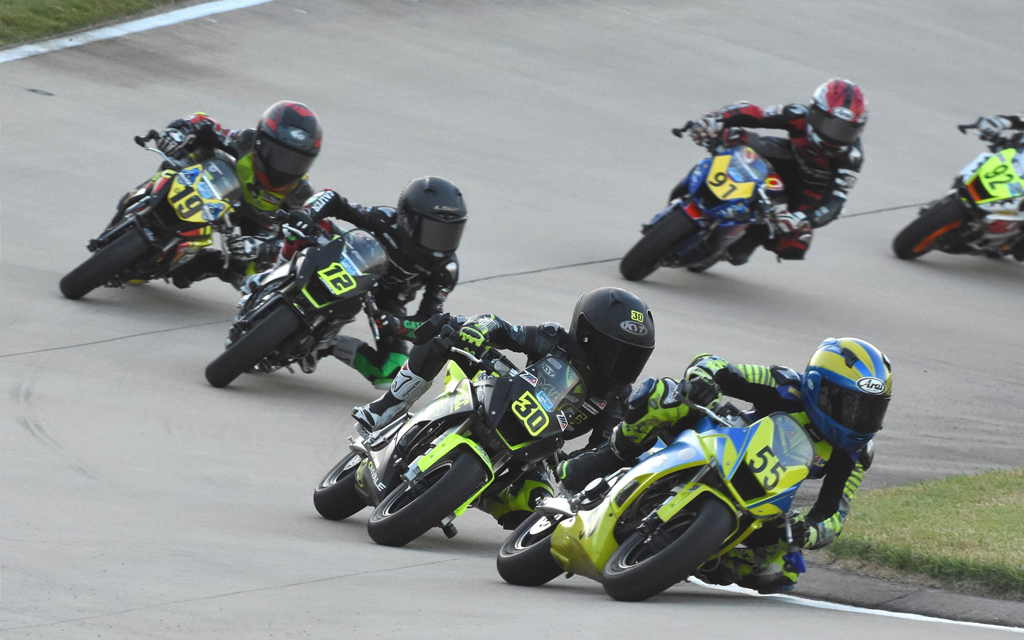 Birmingham, Alabama –  Canadian Mini Superbike National Championship frontrunners Vincent Lalande and Ben Hardwick got off to a strong start in their MotoAmerica debuts on Saturday, showing well in the final round of the North America Mini Cup at Barber Motorsports Park.

The duo enrolled in both the 190 and feature 160 class races, joining a loaded grid of young riders with far more experience in the MotoAmerica feeder series, though that didn’t prevent either Canadian from scoring strong finishes anyways.

The success didn’t initially come easy, as CMSBK champion Lalande and runner-up Hardwick were challenged with the new circuit, unfamiliar tires, and harsh Alabama heat early in the day. The adjustment was especially hard for Lalande, as the 14-year-old towered above almost all of his smaller counterparts.

Nevertheless, both would qualify well in both classes, before kicking off the day with race one in the 160 class. The duo would navigate some early traffic before settling in amongst the fourteen-rider field, with Lalande eventually finding terrific late pace to finish fifth while Hardwick added a strong ninth.

Race two was another strong one for Lalande as he overcame a difficult start, carving his way through the field to finish seventh and once again beat half the field. As for Hardwick, the 13-year-old had at one point worked his way as high as ninth once again before getting caught up as a lapped rider, causing him to fall outside the top ten.

Mac MacClugage would win race one after a thrilling three-way battle with Ryder Davis and Nathan Gouker, while Davis got revenge in race two ahead of MacClugage and Gouker.

The slightly smaller grid of the 190 class meant a bit more room to work with for the Canadian duo and they took advantage, with Lalande scoring his best finish of the day in fourth and lapping on par with winner and phenom Kensei Matsudaira, while Hardwick added an impressive seventh for his best finish of the weekend thus far.

Lalande would add his third top-five finish in four races with a fifth-place result in race two, as Hardwick matched his race one finish with another seventh-place outcome.

Matusdaira would add a second victory in the 190 class, winning ahead of Joshua Raymond in race one and Mahdi Salem in race two.

The duo will get another pair of chances in each class on Sunday, with four more races set to get underway in the morning in both the 160 and 190 categories.

In other action at Barber, defending Medallia Superbike champion Jake Gagne moved one step closer to another title with a dominant victory in race one.

Gagne was able to grab the holeshot despite a terrific launch from his Fresh N Lean Progressive Yamaha teammate Cameron Petersen, and immediately separated himself from the rest of the pack with Petersen defending from Matthew Scholtz and Gagne’s main title rival, Danilo Petrucci.

No one was able to match Gagne’s pace as he ultimately led start-to-finish for the win, but the reigning champion was given an extra boost to his title hopes when Petrucci – then chasing Scholtz for second – was handed a jump-start penalty.

As a result of the penalty, Petrucci would slide to fourth in the final order with Scholtz and PJ Jacobsen completing the podium, handing Gagne a 13-point advantage with only 25 points left up for grabs in the final race of the season on Sunday.

“I knew if we could get a win today and grab that point spread, we would sleep a bit easier tonight,” Gagne said. “Anything can still happen, and we’ll see what the weather does, but either way we’re prepared. The gameplan is still the same, and that’s to try and break away, but mostly avoid the drama and bring it home.”

Scholtz’ second-place finish will bring him to within just a few points of Petersen for third in the overall standings heading into Sunday’s finale, after Petersen crashed on lap four.

“The first two or three laps I was folding the front trying to just hold on to Jake and Cam, and then I saw Cam go down in front of me,” Scholtz said. “I know Cam and I are fighting for third in the championship, so I didn’t really need to push harder. We wanted second in the championship this year, so it’s been a bit of a struggle, but this is more for the team and all their hard work.”

Petrucci’s loss would be Jacobsen’s gain as he joined the two Yamaha riders on the podium following the penalty, though he came close to catching Petrucci on-track regardless.

“I didn’t really know about Danilo’s penalty, I just tried to put my head down and ride,” Jacobsen said. “I actually had a mini highside at the start that sort of cost me my race, but we had really good pace after that so a bit unfortunate, but we’ll continue working.”

Gagne will have a chance to wrap up his second consecutive Superbike title on Sunday.