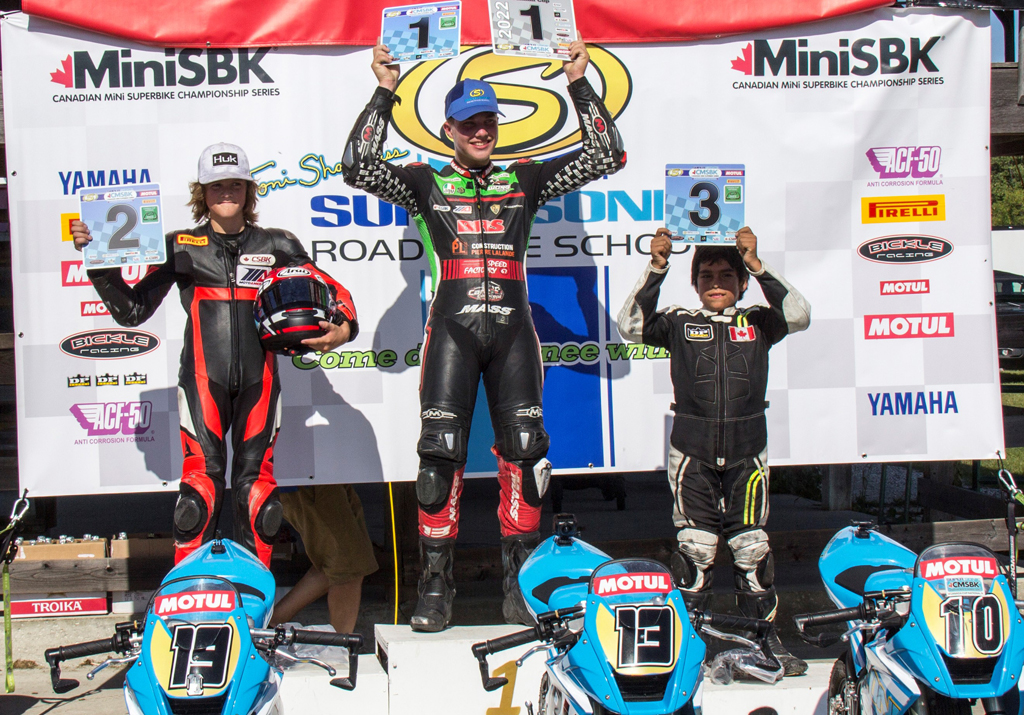 The final round of the MotoAmerica Mini Cup series will have a pair of frontrunners from the “great white north” later this month, as Canadian Mini Superbike National Championship frontrunners Vincent Lalande and Benjamin Hardwick plan to join the grid at Barber Motorsports Park, September 23-25.

Lalande and Hardwick were the icons of the inaugural CMSBK season, finishing one-two in every race as 14-year-old Lalande captured the championship in the final round over 13-year-old Hardwick.

Both riders will be joining the 160cc class field at historic Barber, riding identical Super Sonic School GP-O 160 Ohvale machines – backed by former Pro racer Toni Sharpless – whilst they will also both be contesting the 190cc category aboard their own personal Ohvale GP-2 machines, with Lalande having just purchased his in the days leading up to the event.

“It will be a very good opportunity for our top Canada Cup National riders to see how they compare against the best the U.S. has to offer,” Sharpless said. “The MotoAmerica MiniCup is the perfect chance for us to gauge how much work we still need to do as riders and as a series, but hopefully earn some strong results as well!”

The duo won’t be the first Canadians to head south for the Mini Cup, as St. Catherines, ON teenager Alessandro Giganti raced earlier this season in Road America and Pittsburgh, paving the way for the CMSBK frontrunners to follow his path.

While Giganti likely won’t be able to join them in Alabama, the future of Canadian racing will still be well represented in Lalande and Hardwick, who have earned praise from current Bridgestone Canadian Superbike Championship stars as they climb the ladder.

Lalande in particular may be making one of his last ever appearances aboard a MiniSBK machine, as he already appears set to join the CSBK paddock next season as arguably the most prized Canadian racing prospect since former World Superbike competitor Brett McCormick.

As for Hardwick, the 13-year-old will gain valuable experience towards his own CMSBK national championship bid next season, as he will take over as the overwhelming favourite for the 2023 Canadian crown after exiting Barber.

Both riders will join what should be an exciting finale in the MotoAmerica series, with championships still on the line in every category heading into the penultimate round at New Jersey, including in the feature Superbike class.