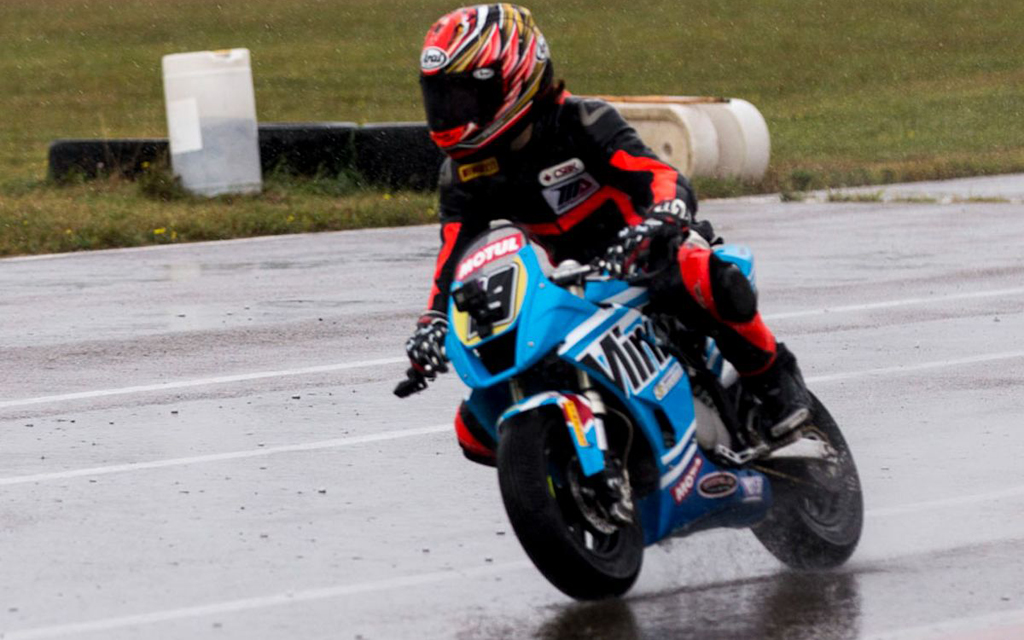 A new name finally took the top step of the Motul Canada Cup podium on Sunday, as Benjamin Hardwick scored his maiden victory in the penultimate round of the Canadian Mini Superbike Championship at Lombardy, presented by the Super Sonic Road Race School.

After rival Vincent Lalande won the first eight races of the season with Hardwick the runner-up on every occasion, Sunday’s rain brought an opportunity for the younger rider to change his fortunes, pressuring Lalande early and often as they battled the conditions aboard their Pirelli-mounted Ohvale GP-O 160 machines.

Lalande would hold a marginal lead for the first three laps with Hardwick close behind, looking set for another potential victory before making his only mistake of the campaign thus far, crashing in the turn ten hairpin and immediately handing the lead to Hardwick.

The 14-year-old Lalande would quickly remount and charge back through the field, but it was never going to be enough as Hardwick held on for a comfortable debut win in the tricky circumstances.

The victory will keep the 13-year-old in firm championship contention and end Lalande’s perfect streak at eight races heading into the final round next weekend, where the pair will battle for two final times in the feature Motul Canada Cup class.

Lalande got some revenge later in the day as he won another Moto-1 contest aboard his SpeedFactory67 Buccimoto machine, setting times comparable to dry conditions as he dominated Felix Di Gennaro in second and Jonathan Massignani in third.

Both Lalande and Massignani returned in the GP-1 category as well, this time with Hardwick also on their tails, though Honda-mounted Massignani managed to put himself in between the two rivals this time and finish second between race winner Lalande and third-place finisher Hardwick.

Martin Parent would win the Sport-2 class race for Kawasaki, beating fellow Kawasaki riders Sean Hickman and Che Smith in a “green sweep” of the podium.

One of the best stories of the day, however, was in the combined Sport-3 and Moto-3 category, where Nathalie Vezeau elected for slicks in the wet conditions – and amazingly won a thrilling battle over Mike Mann and third-place finisher Brandon Stevens.

The Canadian MiniSBK field will have just one final week of rest before returning in six days for the penultimate race of the campaign, before the final half of the season-ending doubleheader next Sunday, all at Lombardy with multiple titles still on the line.