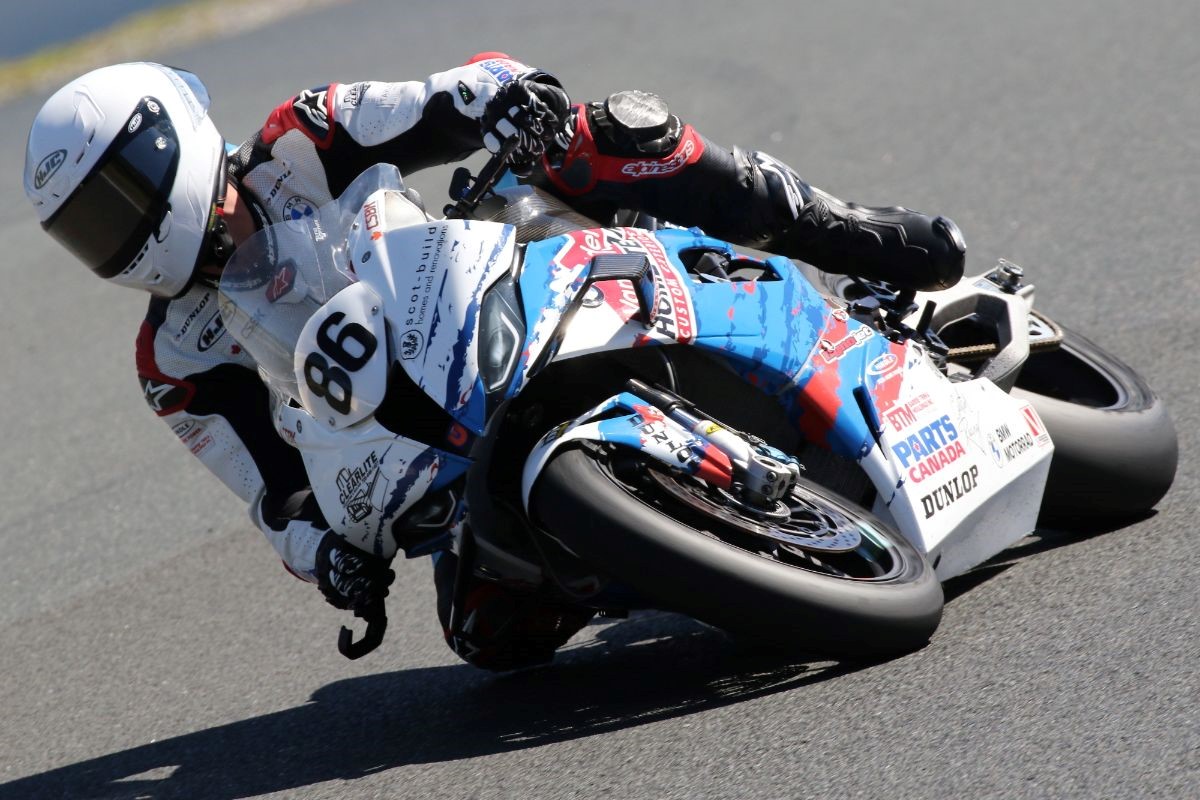 Ben Young will start on pole position for all three feature Superbike races this weekend, setting a new lap record in the BS Battery qualifying session on Friday ahead of the Canadian Superbike Championship tripleheader finale at Canadian Tire Motorsport Park.

Young was the man to beat in the initial Q1 session, topping the timesheets with a best lap of 1:21.625 aboard his Van Dolder’s Home Team BMW. The focus was hardly on him and rival Alex Dumas, however, with many of the expected frontrunners setting a good enough time early on to secure their place in Q2.

Instead, the focus was on the likes of Kenny Riedmann and Rennie Scaysbrook, amongst others, who were considered virtual locks to crack the top ten but instead came out on the losing end of a thrilling battle for the final two spots, with just a quarter-second separating six riders down to 14th.

With a few of the top names weeded out and a clearer track in front of them, the usual suspects returned for Q2 and a chance at BS Battery pole position, this time mounted with the special Dunlop “Q” tires offered to the top ten.

It was there where Young seemed most confident, taking provisional pole on his banker laps before even mounting the Q tire, as Dumas opted for the same strategy. It was then Young who made the change first, and he wasted little time in finding the benefits of the faster compound, laying down a time of 1:20.369 – nearly two-tenths faster than the previous lap record.

After Young had burned through his two flying laps, it was up to Dumas to snatch the top spot back in the dying moments, but the Liqui Moly/Fast School Suzuki rider came up just short in the end as he only improved to a 1:20.557, just 0.188 seconds slower than the championship leader.

In the process, Young not only secured pole for the weekend tripleheader but also the season-long BS Battery Pole Award, with his second pole of the season giving him a two-point cushion and an extra $2000 prize over Dumas – though his attention remains elsewhere heading into race one on Saturday.

“It’s a great bonus, and it feels good to put a bit of extra cash in the pockets and be holding this award, but the main focus is still that #1 plate,” Young said. “But the grid position will help that, and it’s nice to have the Van Dolder’s Home Team BMW at the front heading into the weekend.”

As for Dumas, his inexperience on the Q tire compared to Young and his rivals may have put him at an early deficit, but he doesn’t expect that to trend into the weekend as he looks to erase his 31-point gap to Young.

“It was my first time on the Q and I didn’t really know what to expect, but I think with another crack at it things could have gone a bit better,” Dumas said. “But our race pace is still good, so that’s what we’re focused on for the weekend.”

Joining them on the front row will be the pair of Sebastien Tremblay in third and Trevor Daley in fourth, with Tremblay matching his grid spot from CTMP a year ago aboard his Turcotte Performance Kawasaki.

As for Daley, the OneSpeed Suzuki rider has put himself where he needs to be for the Constructors Championship, as he’ll line up on the end of the front row and just in front of Sam Guerin and his EFC Group BMW in fifth.

BMW will lead that championship by 27 points heading into Saturday, with Daley and Guerin expected to play significant roles in the weekend action as the rear-gunners to Young and Dumas up front.

Centering the second row next to Guerin will be Tomas Casas, who has had a strong season debut thus far as he qualifies sixth aboard his Parts Canada Yamaha. That will put him one place clear of Steven Nickerson at the end of the second row, who flashed front row pace before fading aboard his DeWildt Powersports Honda.

The Brooklin Cycle Racing Pro Rookie of the Year fight could add extra excitement to the feature class this weekend, as presumptive favourite Ryan Taylor was forced to bow out after a major crash to his Ducati earlier in the week.

The absence of both him and award leader Trevor Dion have opened up a massive opportunity for fellow Ducati rider Christian Allard, who qualified ninth aboard his Turcotte Performance machine on Friday after beating out Riedmann and company for one of the final spots in Q2.

Dion will move one step closer to a different Pro trophy, however, grabbing pole position in the Liqui Moly Pro Sport Bike class aboard his LDS Consultants Kawasaki.

The championship leader will extend his advantage to 22 points over David MacKay, who qualified second on the grid and just 0.231 seconds behind Dion, though his Fast Company Kawasaki team will have some work to do overnight after MacKay crashed at the end of the session.

Just less than a half-second separates the top three names in the title fight heading into the weekend, with Elliot Vieira joining them in third aboard his Snow City Yamaha, as all three look set for a thrilling pair of battles this weekend in the middleweight class.

Julien Lafortune scraped back one point on championship rival John Fraser in the AIM Insurance Amateur Superbike class, storming to pole position with a blistering time of 1:24.352, over a second clear of Fraser and just slightly off the qualifying lap record.

Fraser will still carry an eleven-point advantage into race one on Saturday, but he wil have to find a lot of extra pace if he looks to hang on to Lafortune out front and secure a national championship.

Alexandre Michel will start from pole position for the first time in his Amateur Sport Bike career, topping an abbreviated session with a time of 1:27.516 aboard his Kawasaki, but the real attention was on the differing fortunes of championship rivals Fraser and Paul Etienne Courtois.

Courtois was able to salvage a fourth-place grid position and extend his title lead to eight points prior to a red flag stoppage, while Fraser had only worked his way up to 12th by the halfway point, leaving him on row four for both races this weekend.

Round two star Andrew Cooney returned to the Super Sonic Race School Lightweight class in a big way on Friday, posting pole position and a new lap record behind a 1:38.227 lap time aboard his Kawasaki.

While Cooney will be the man to beat at the front this weekend, all eyes will be on the riders behind him, as championship leader Bryce DeBoer lines up second with title rival Vincent Wilson squarely behind him in third.

Jared Walker will have some hardware to pick up on Saturday regardless of his finishing order, as he bagged his first pole position of the season in the Lightweight Pro/Am to officially clinch the Pro championship.

Walker entered the weekend with a 58-point lead and only 58-points remaining, but will now avoid any tiebreaker scenario as he grabs a 60-point cushion over Gary McKinnon, who will line up third on the grid.

The top Amateur on the grid will be Cooney, who qualified fourth overall and just one spot ahead of Amateur division leader DeBoer, who will aim for a pair of championships this weekend aboard his Kawasaki.

The full results from Friday’s qualifying sessions, and the schedule for the weekend race action, can be found on the series’ official website.