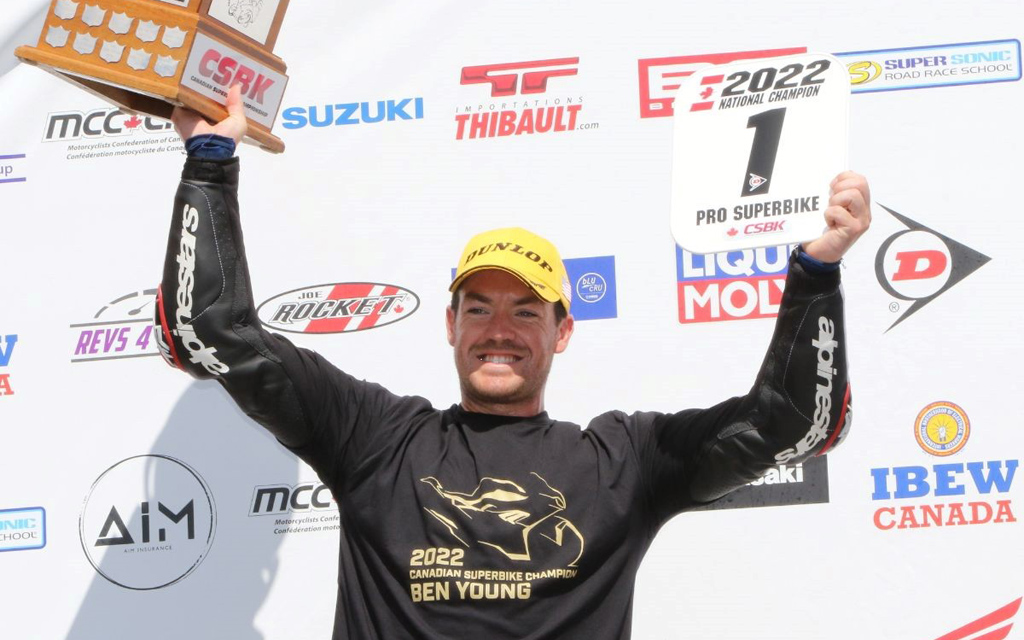 He may not have celebrated it from the top spot of the podium, but Ben Young did enough to clinch his second career national title on Sunday, finishing behind race winner Alex Dumas in the penultimate race of the Canadian Superbike Championship at Canadian Tire Motorsport Park.

Young entered with a fairly straight-forward path to a second Canada Cup, as he needed only to finish on the podium to clinch the title, but the Van Dolder’s Home Team BMW rider left nothing to chance as he pushed Dumas for much of the race.

The 2021 champion led Young for majority of the contest as he tried desperately to keep his crown, retaliating quickly when Young made a pair of passes for the lead, including a brave move into turn ten similar to the one Young put on Dumas in race one on Saturday.

In the end, Dumas would hold off his rival for his seventh career victory and third of the season, but it wasn’t enough to shake Young as he salvaged a 32-point lead with only 27 points remaining in race three on Sunday.

“We had a lot of fun with this trophy in 2019, so I’m sure we’ll have some more fun tonight, but there’s definitely a lot of emotions,” Young said. “Alex and I have been on it all year, but I said to him before that the #1 plate is borrowed and never owned, so I’m going to come back fighting in 2023 to keep it from him.”

While Young did wrap up one title on the day, he will have some more work to do to bring home a Constructors Championship for BMW after a double-podium for Suzuki – though he did bring home BMW’s 125th podium in their feature class history.

“That’s another real cool piece of history, but again Jordan Szoke was responsible for a lot of those so shout out to him,” Young said. “Either way it’s awesome for BMW, but now we have to go out and wrap up the Constructors this afternoon.”

While Dumas did add another victory under his belt and the first of his career away from Calabogie Motorsports Park, it’s hardly the result the Liqui Moly/FAST School Suzuki rider was hoping for, though he too is already looking to take the trophy back in 2023.

“Congrats to Ben, it was probably the most fun race of the year and he rode another great race, but we’ll be back even stronger to push again in 2023,” Dumas said. “It’s cool to see all the fans here as well, and hopefully with this out of the way we can go win another Constructors Championship for them.”

Dumas and Young were joined on the podium by Trevor Daley for the fifth time this season, as the OneSpeed Suzuki rider made a strong charge aboard his B-spec machine to pull home crucial points for Suzuki in front of a massive crowd at CTMP.

“It’s a little redemption for yesterday, and hopefully rewards the crew for all their hard work getting everything ready,” Daley said. “It’s cool to put on a show for all these fans, I haven’t seen this many people since I was a kid and it’s really, really awesome.”

Daley’s performance pushed Tomas Casas down to fourth, who again ran in the podium spots early on before settling in to a four-rider battle aboard his Parts Canada Yamaha, with Sebastien Tremblay finishing just behind in fifth for the Turcotte Performance Kawasaki team.

Trevor Dion survived a late scare to clinch the Liqui Moly Pro Sport Bike championship on Sunday, finishing fourth as Elliot Vieira ran away with an impressive victory. Dion’s LDS Consultants Kawasaki team had reason to be concerned as title rival David MacKay worked his way to second in the late stages, but it wasn’t enough in the end as Dion did just enough to capture a historic middleweight crown.

Despite seeing his lead of 22 points shrink all the way down to just eight, Dion will hang on become the first rookie Pro Sport Bike champion in history, and the third youngest ever in the support class.

“It was quite the season! We had a lot of ups and downs, but in the end it’s the best year I’ve ever had at a racetrack,” said the 20-year-old. “We’ve had five different winners in the last five races, which just shows how competitive this series is and the level these guys have pushed me to.”

Dion used his opportunity to bring friend and team member Mike Grass onto the podium in an emotional tribute to the former Pro Sport Bike rider, who is still recovering from a scary crash in turn four at CTMP a year ago.

As for MacKay, it was an unfortunate end to a rollercoaster season that put him on the back foot early after a crash in Grand Bend, though the Fast Company Kawasaki rider showed incredible poise since then, fighting his way back to finish just narrowly shy of his first Pro national championship.

As for Vieira, the Guyanese star managed to end his breakout year on a high note in front of friends and family, setting up the Snow City Yamaha rider for a potential title charge of his own in 2023.

Completing the podium was race one winner Matt Simpson, who quietly capped off a brilliant rookie season of his own aboard the Evans Racing Yamaha to move himself to fourth in the final standings.

The full results from both races can be found on the series’ official website. For more information on the CSBK Canadian Superbike Championship, visit www.csbk.ca.