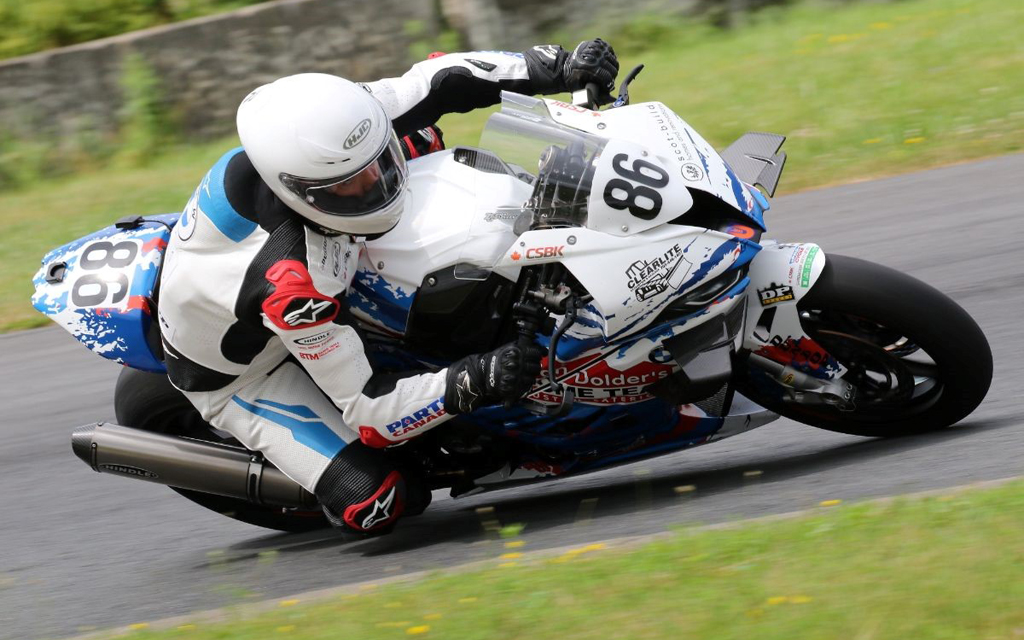 The thrilling 2022 Canadian Superbike Championship season will come to a close this weekend, as a pair of former champions in Ben Young and Alex Dumas battle for their second Canada Cup in the season-ending tripleheader at Canadian Tire Motorsport Park, August 12-14.

Young already has one hand on the trophy entering the fast, flowing layout of “Old Mosport,” taking a 31-point lead into the first of three races on Saturday after Dumas crashed out of their race one battle in Atlantic Motorsport Park.

However, the Van Dolder’s Home Team BMW rider will know as well as anyone how unpredictable CTMP can be, frequently producing large battles for the lead that can include as many as six or seven riders. That presents an opportunity for Dumas to claw points back, but he’ll have to do something he hasn’t done yet – win at CTMP.

Young has won twice at the circuit in his career, including his first ever victory in 2018, while Dumas failed to take the top step in last year’s tripleheader, settling for a pair of second-place finishes and a third-place result. In fact, Dumas has still yet to win at any track other than Calabogie, where all six of his Superbike victories have come thus far.

The Liqui Moly/Fast School Suzuki rider will have the benefit of knowing he has nothing to lose in the final round, however, as Young can’t afford to be overcautious against the talented 20-year-old. Dumas has shown an ability to break away from the field in the past, something that could be disastrous for Young if he’s caught in a battle with others.

The duo will also wage war for a final time in the BS Battery Superpole session on Friday, not just to determine grid position but also to crown a winner in the season-long BS Battery Pole Award battle, where Young leads Dumas by two points.

Both will get a bit of a pace advantage as well, as the return to CTMP will also bring with it the return of the special Dunlop “Q” tires – the fastest outright tire Dunlop has to offer, though that also presents an opportunity for another member of the midfield to challenge the front row.

Amongst the challenging group will be a pair of familiar names, albeit two in very different circumstances, as Trevor Daley and Kenny Riedmann each look to steal valuable points for their respective manufacturers.

Daley has been a crucial part of Suzuki’s efforts once again aboard his OneSpeed machine this season, capturing four podiums in six races to place himself third in the overall standings and help the defending Constructors champions in their quest for a second title.

However, current points leaders BMW will get massive reinforcements in the form of Riedmann, who continues his on-again, off-again Superbike career with a return aboard one of Young’s older Van Dolder’s Home Team S1000RR machines.

The three-time championship runner-up and three-time Sport Bike champion has captured both of his Superbike victories at CTMP, and has racked up nine podiums in 12 career races there, including a pair during his last CSBK appearance as a fill-in for Daley aboard a Suzuki in 2020.

The former title contender will be in a tricky position as he aims to help his friend and BMW teammate Young, but will also need to maximize his points ahead of Dumas for the Constructors title battle.

BMW will lead that fight by 27 points over their rivals Suzuki, though that gap could be erased or expanded upon quickly across three feature races with multiple proven talents at each manufacturer.

The traditional midfield group will also get a pair of new additions, one being a complete wildcard to the CSBK field, as Tomas Casas returns to the grid alongside Australian debutant Rennie Scaysbrook.

Scaysbrook, considered the master of the Pikes Peak Hill Climb and a current Isle of Man TT competitor, will be piloting a factory-backed Aprilia RSV4 as the Italian brand makes its return to the series for the first time since 2016.

The Sydney, Australia native has also found success road racing in the United States, while learning a number of exotic tracks as a journalist for Cycle News, something that could come in handy at a fast, challenging circuit like CTMP.

As for Casas, the Parts Canada Yamaha star has not appeared this season after an injury in pre-season training, but will make his 2022 debut at his home track as he looks to build momentum towards 2023.

Casas was one of the surprise stars of the CTMP weekend in 2019, briefly running at the front of the pack before taking fourth and sixth-place finishes, though he struggled through a number of issues last time out in 2021.

Alongside the new names will be a pair of regular faces in Sebastien Tremblay and Sam Guerin, who also enter a pivotal weekend of their own as they battle for fourth in the overall standings.

Tremblay will carry a six-point advantage into the final round aboard his Turcotte Performance Kawasaki, thanks in large part to his podium in race three at Calabogie, but he’ll have his hands full against Guerin at arguably his strongest track.

The EFC Group BMW rider stole the show with a second-place finish there in 2020, challenging 14-time champion Jordan Szoke in just his second Pro weekend ever, and added another podium in race two – the last time the Quebec star found the rostrum.

Another storyline to follow throughout the weekend will be the Brooklin Cycle Racing Pro Rookie of the Year fight, where just a single point separates the top-two rookie talents entering the final tripleheader.

Round one star Trevor Dion currently leads the standings, but is not expected to compete as he focuses on capturing the Liqui Moly Pro Sport Bike crown, leaving a massive opportunity for Ryan Taylor to steal the honours.

Taylor has been consistent aboard his privateer Taylor Racing Ducati, finishing inside the points in all but one race (a crash in AMP) to put himself ninth overall and score 30 of Ducati’s 37 points this season.

However, fans should not be quick to rule out reigning Amateur Superbike champion Anthony Bergeron, who trails by just 13 points despite only appearing in round two at Calabogie. The privateer BMW rider showed well at CMP and is fresh off his first Pro win at the Pro 6 GP regional series, and he could close that gap quickly as he returns to the site of his race three victory in the Amateur championship a year ago.

The weekend will officially kick off on Friday with a battle for BS Battery Pole Position in the Pro Superbike class, with qualifying setting the grid for the first of three races on Saturday and the final doubleheader on Sunday.

The full schedule of events can be found on the series’ official website.