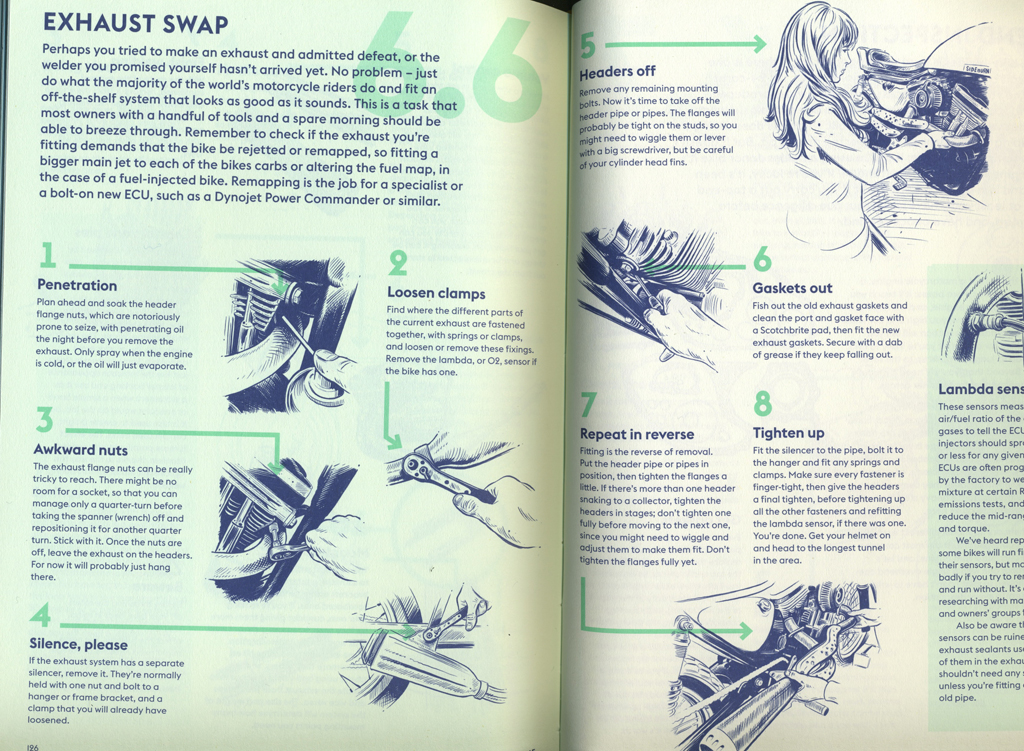 A Nut-and-Bolt Guide to Customizing Your Bike

Adam Sanzo’s bike- building team might find the book How to Build a Motorcycle useful. Subtitled A Nut-and-Bolt Guide to Customizing Your Bike, it is a fairly thorough examination of the possibilites inherent in setting out to build a custom motorcycle. Published in London in 2020, it “leads you through all the key stages of customization—from choosing the right project for your skill level to sourcing a base bike and safely taking on some full-on bike-building tasks,” according to the back cover.

The book’s 192 pages seem to cover just about everything you’d want to know to make a good start at a bike project, from welding, and cutting and repairing threads, to narrowing a fuel tank, paint effects, and “home painting,” building a frame, swapping the fork, running cables, swapping wheels, bleeding brakes, making an exhaust system or a wiring loom, lighting, and living with the results of your work.

In the chapter on Electrics, there’s a page titled “What Does What,” with short descriptions of the electrical system’s components, and the sensible advice to keep with bikes built in the previous century: “Some [later] bikes won’t run without sensing the original key or instruments.” There’s a chapter on engine types, with descriptions of different forms, including V-twins: “The V-twin remains a connoisseur’s choice (except Honda’s CX; that’s just for people who can’t afford a Guzzi).” Ahh, humour.

It’s an easily read book, filled with very short passages, lots and lots of accurate drawings, and bits of information that might come in useful; e.g., a passage on Lambda sensors for exhaust systems and whether it’s okay to toss one away (answer: sometimes).

I haven’t read it exhaustively; I only borrowed it from the library for something to write about, but it does appear that the writer of this book knows his stuff, and the artist who drew the images is not only talented, but knowledgeable, too. How to Build a Motorcycle won’t tell you everything you need to know in order to make a motorcycle in your garage, but it’ll get you started, and more importantly, it should help you decide if you have what it takes to build a real motorcycle.

Hardcover. About $35 at Indigo, Amazon, and other Canadian sources. Be sure to get the one by Gary Inman, because there is a kids’ book with the same title that won’t provide the information you seek. Be advised that this book is a good starting point; it’s not the finish line. Maybe that’s something that will be painted by Adam Sanzo and his project members.