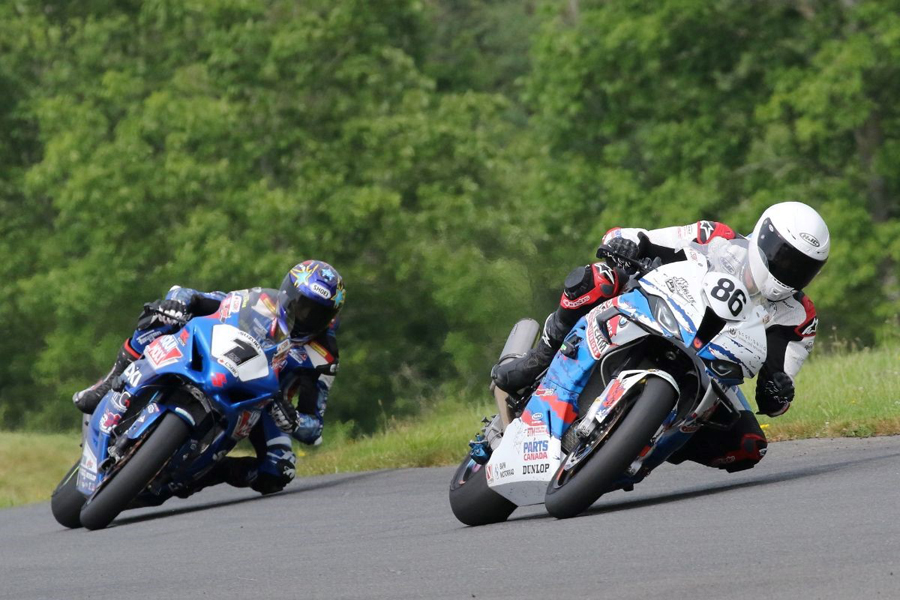 Ben Young moved one step closer to a second Canada Cup on Sunday, winning a dramatic race two in mixed weather conditions at the third round of the Canadian Superbike Championship at Atlantic Motorsport Park, presented by Pro Cycle, Kawasaki, and Arai.

With temperatures soaring over 33°C (91°F) and feeling like a scorching 35°C (95°F) in parts of Nova Scotia, Young and Dumas renewed their championship battle after a wild race one that saw Dumas crashing out and blowing the title fight wide open.

Young initially grabbed the holeshot after a great launch from the front row, but that was quickly negated by a lap one red flag and subsequent restart. Dumas would get his redemption on that restart, storming off the line while Young instead got bottled up behind Trevor Daley.

The championship leader quickly moved past Daley but had work to do, with Dumas opening up a near two-second advantage early on. Young began to slowly chip away at the deficit just as the skies opened up, with light rain in only select parts of the track making for tricky conditions in the second half of the 22-lap feature.

Young was masterful in the treacherous conditions, cruising past Dumas and taking the lead. Then, it was Dumas’ turn to fight back, reclaiming the lead just moments later, with the two trading blows a couple of times in the late stages.

Sensing a slower pace than he liked, Young ultimately moved past Dumas for a final time on the penultimate lap, completing “the double” at AMP and extending a crucial 31-point advantage atop the standings entering the final round.

“Neither of us really had any idea what to do in the conditions, so I wanted to let Alex lead for a while because I knew I had a bit more to lose,” Young said. “I didn’t feel any pressure to push for the win, but the pace on this Van Dolder’s Home Team BMW was just so much better that I was able to pull away at the end.”

There will still be plenty of points on offer in the final tripleheader weekend at Canadian Tire Motorsport Park, but Young acknowledged the chance for a second CSBK crown is front of mind.

“We really want to put that #1 back on the bike, especially after we didn’t get to run it in 2020, so hopefully we can bring that home and showcase it here next year,” he said.

As for Dumas, it was a frustrating end to what was an already catastrophic trip out east, as he struggled with the mixed conditions aboard his Liqui Moly/Fast School Suzuki, especially in turns three and four entering “The Rollercoaster.”

“The rain messed me up, and I just didn’t want to push and make a mistake like yesterday,” Dumas said, despite his championship deficit. “The odds aren’t really there going to CTMP, but we’re going to see what we can do and try to win a second championship in a row.”

The two were joined on the podium by familiar foe Trevor Daley, who ran a stellar race in third and played a huge role in the process for the Suzuki tandem aboard his OneSpeed/Pro Cycle machine.

“We stuck to the plan here. If they diced it up at the end I thought we might be able to join the mix, but ultimately I just ran consistent times and brought home another podium and another good result for Suzuki in the Constructors Championship,” Daley said. “The championship might be a stretch at CTMP, but I’m looking for my first win and I hope I can get it there in three weeks.”

Daley’s result will help Suzuki erase any damage to BMW, who maintain a 27-point lead thanks to the efforts of Young and Sam Guerin in fifth.

Guerin was another rider who seemed to enjoy the mixed conditions, closing the gap considerably in the late stages to Sebastien Tremblay, though the EFC Group BMW rider ultimately ran out of time.

Tremblay’s finish will keep the Turcotte Performance Kawasaki rider fourth in the standings, while also helping Kawasaki cling to third in the Constructors.

Local star John Fraser extended his narrow lead atop the AIM Insurance Amateur Superbike class, winning race two to open up a 12-point advantage. The 16-year-old absolutely blitzed the field, leading by nearly three seconds after the opening lap and going on to win by 21 seconds total.

Fraser wasn’t done there, however, adding another win in the Amateur Sport Bike ranks as well for a clean sweep of the Amateur classes this weekend. The Yamaha rider had a much tougher time in this one though after a back-and-forth battle with Paul Etienne Courtois, who will escape with a seven-point lead over Fraser with two races left.

Avery Hart got some redemption in the Super Sonic Race School Lightweight class, winning race two after crashing out of the lead battle on Saturday. The local rider and former Lightweight star left nothing up to chance this time around with a 15-second victory, but the real winners of the day were the two podium finishers next to him.

Bryce DeBoer, the third-place finisher, will inherit a seven-point championship lead behind his fourth podium of the season, while runner-up Vincent Wilson moves to second overall and just a point clear of former title leader Evan Moriarity.

Jared Walker returned to his winning ways in the Lightweight Pro/Am, coming out on top of a wild three-way battle with local veterans Gary McKinnon and Richard Thompson.

Hart managed to get the better of DeBoer for a second time on the day in the Amateur ranks, finishing fourth on-track but securing a win in his category. DeBoer will extend his championship lead however, taking a nine-point advantage over third-place finisher Grant Nesbitt.

The wild 2022 Canadian Superbike Championship will now get a two-week breather before returning for its annual finale in CTMP, August 12-14, with three feature Pro Superbike races to decide the crown and a doubleheader for all other national classes.

The full results from AMP can be found on the series’ official website.