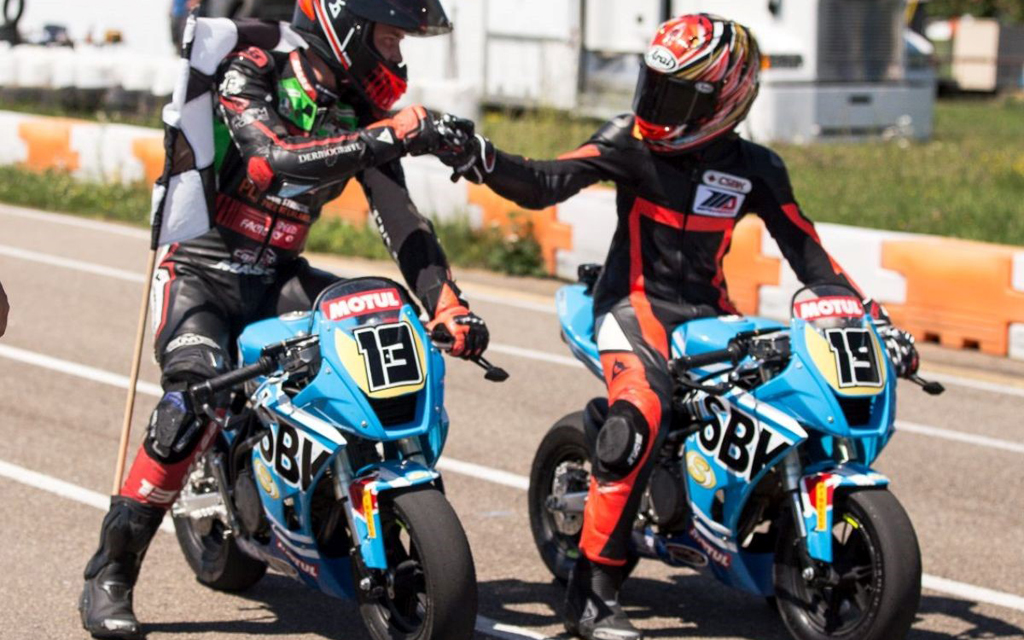 Teenage phenom Vincent Lalande continued to etch his name in the record books on Saturday, winning race one in the Canadian Mini Superbike Championship for his sixth consecutive Motul Canada Cup victory to begin the season at Lombardy Raceway, presented by the Super Sonic Road Race School.

Lalande swept the opening four races at Lombardy this May, before winning a one-off race five at the Grand Bend Motorplex two weeks ago, but a return to his familiar stomping ground brought only more success on Saturday as Lalande jumped out to an early lead from rival Benjamin Hardwick.

The 14-year-old Mirabel, QC native didn’t have an easy win in store, however, as Hardwick made up for a poor start with a number of consistent laps, reeling in the championship leader on his mandatory Pirelli-mounted Ohvale machine.

Hardwick eventually began to put real pressure on his counterpart, setting the fastest lap of the race with a 38.969 and building towards another late duel between the duo, but his charge was spoiled when he crashed in the hairpin with just three laps to go.

The 13-year-old Sudbury, ON native re-mounted to finish third, continuing his own impressive run with a fifth-consecutive podium to begin the campaign.

Splitting the two familiar finishers was debut entry Dexter Falkenberg, who was making a wildcard appearance out of White Rock, British Columbia. The understudy of pro racer and four-time National champion Tomas Casas, 14-year-old Falkenberg was riding an Ohvale GP-O 160 machine for the first time but didn’t look at all out of place, running consistently just a second off Hardwick and Lalande to score a debut podium in second.

The newest member of the feature Canada Cup class traditionally races a KTM machine in the Pacific Coast Mini Roadracing Club, but had never turned a wheel in Ontario prior to this week. The youngster was able to shave nearly 11 seconds off his lap time by Saturday alone, thanks in large part to the mentorship of Casas and the Super Sonic Road Race School.

Lalande added two more victories to his day in the support classes, winning the GP-1 and Moto-1 categories aboard his SpeedFactory67 Buccimoto machine to extend his title lead in both groups.

Both victories came against newcomer Felix Di, who pushed Lalande early before ultimately losing out in the late stages, while Hardwick joined them on the podium in the Moto-1 class and Falkenberg completed the podium in the GP-1 ranks.

Di had an eventful GP-1 race, briefly challenging Lalande before running off but recovering just in time to battle with Falkenberg for second place, a position he would come away with thanks to a brilliant move late in the race.

The final race of the day saw another victory for nine-year old star Michael Galvis, who continued his epic form in the Moto-2 category. The youngest rider in the Canadian MiniSBK field stole another win aboard his Kawasaki KX65 ahead of pro national racer Colin Campbell, with Mike Bell completing the podium in third.

Lalande and company won’t have to wait long for their next opportunity to battle it out in Lombardy, with the second half of the round four doubleheader going on Sunday.