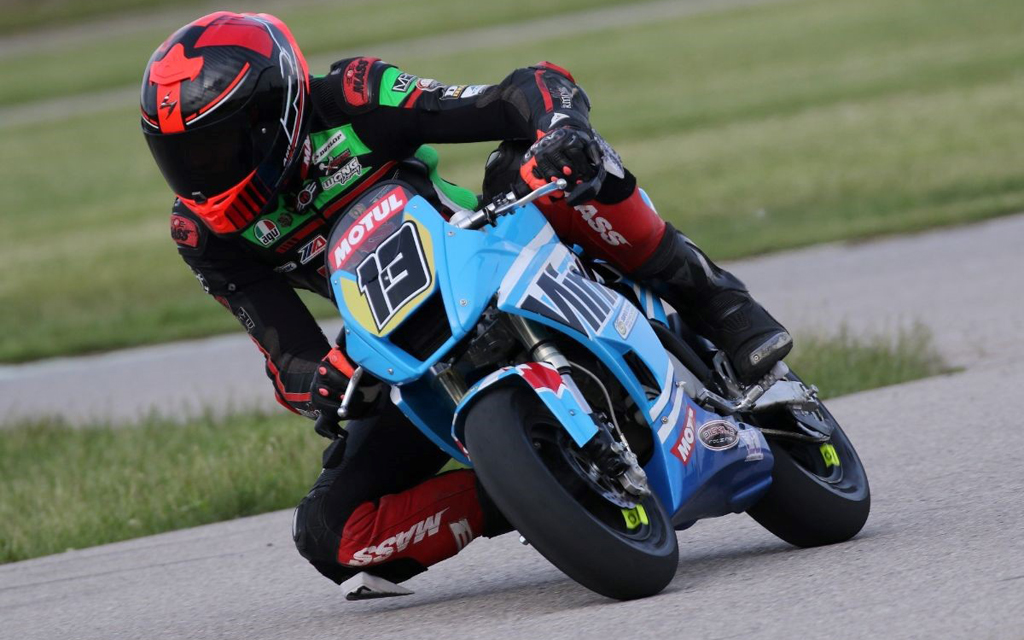 Lalande completes another weekend sweep in Canadian MiniSBK at Lombardy

The fourth round of the Canadian Mini Superbike Championship wrapped up with a familiar face at the front, as teenaged star Vincent Lalande won his seventh consecutive Motul Canada Cup feature race in Lombardy, presented by the Super Sonic Road Race School.

Lalande had swept the first three weekends and all five races before adding a sixth win on Saturday, and Sunday brought the same result as the 14-year-old maintained his perfect season aboard his Pirelli-mounted Ohvale machine.

Sunday’s race brought a new challenge for the field, however, as the grid had to navigate a slightly revised layout around the tight, challenging Lombardy Raceway, but the change wasn’t enough to unseat a resilient Lalande at the front as he stormed away for one of his most dominant victories of the campaign.

He was joined once again by rival Benjamin Hardwick on the podium, who maintained his perfect podium streak in second, though Hardwick had perhaps his stiffest challenge yet in what was a thrilling battle with newcomer Dexter Falkenberg.

With Lalande clear of the duo, it was Hardwick who led the wildcard entry for majority of the race, maintaining his advantage thanks to slightly better pace through the new, revised turn two chicane. Falkenberg didn’t look out of place through the rest of the layout, however, and managed to hang with Hardwick right to the line.

The 13-year-old Hardwick ultimately finished just 0.218 seconds clear of Falkenberg, with the 14-year-old British Columbia native completing a spectacular debut weekend with a pair of podiums in his first ever race appearance in Ontario.

Hardwick’s spectacularly consistent form will keep him ever so slightly in the title mix, though he will need to put some distance between himself and Lalande over the final two rounds and four feature races in August.

The trio battled again in the Moto-1 class support race later on in the day, with Falkenberg briefly grabbing the holeshot off the line before Lalande restored his lead en route to another victory aboard his SpeedFactory67 Buccimoto machine.

Falkenberg would settle in to second and lead Hardwick for almost the entirety of the contest, but the younger Sudbury, ON native eventually used his experience to make a brilliant move as they approached lapped traffic in the hairpin, clearing Falkenberg at the line to take another second-place finish on the day.

The other two support categories were won by nine-year old sensation Michael Galvis, as the youngest rider in the MiniSBK paddock dominated both the Sport-2 and Moto-2 races on Sunday.

Galvis was especially strong in the Sport-2 event, lapping the entire field aboard his Kawasaki KX65 to finish well clear of Mike Bell in second. Bell would place his Bellistic Films TTR110 just ahead of Sean Hickman, who scored a debut podium in third.

As for the Moto-2 ranks, it was pro national racer Connor Campbell who represented the biggest challenge to Galvis, though the emerging superstar held on for another victory with Bell completing the podium in third.

The Canadian Mini Superbike field will now enter their unofficial mid-summer break, with seven weeks of rest before the youngest talents in Canadian racing return to Lombardy on August 20-21 and again for the season finale on August 27-28.