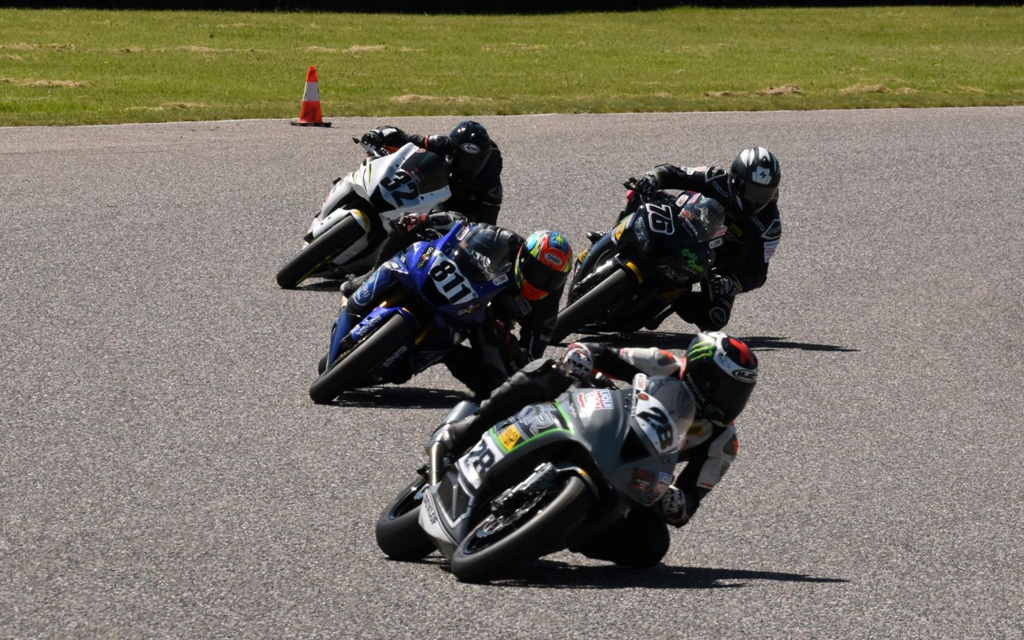 Reigning Pro 6 GP Regional Champion Michael Leon of Beaconsfield, QC, took his Royal Distributing BMW S1000RR to a narrow, .146 of a second win over the DC Construction/Fast Company BMW of Maple, ON.’s Ivan Babic in the second round of the 2022 Championship at Calabogie Motorsport Park, ON.  Fittingly, BMW Motorrad sponsored the race.

The Pro pair battled throughout the final at the 5.05 kilometer, 20 turn venue.  Leon jumped into the lead from the start of the eight-lap main event, with Pole sitter Babic applying pressure throughout.  Babic seemed to have the edge entering the final, Quary/Carousel section of the venue, and made his move on the final tour.

“I kind of knew that he would try me there,” confirmed Leon, who shut the door when Babic made his bold move.  “If it was going to work, he was going to take us both down!  It was close, there was good pressure, and I was happy with the pace, given the cool conditions.  I think the last time I won a Superbike race was maybe 2018 at Shannonville, and this is my first victory in Superbike at Calabogie.”

“Last weekend didn’t go too well,” continued Leon, referring to his two crashes in the opening round of the National series at Grand Bend, ON.  “So, I was a little bit careful in the slow corners, but the bike was working really well.  We’ll download the data and see what we can learn in time for the National here next month.”

Babic’s runner up effort was a robust performance for a second year Pro climbing the Pro ladder, and he confirmed that “I gave it a good shot with Michael, but it didn’t work out.  The conditions were not ideal, it was very windy, and maybe I could have tried something else- but I am happy overall.”

Third belonged to Ernest Bernhard of Ste-Brigide-d’Iberville, QC, on a Yamaha YZF-R1.  Early in the race, Bernhard was battling with a pack of riders, but by mid-distance he had pulled clear to earn the final podium spot,11 seconds behind the winning BMW duo.

The BMW of Anthony Bergeron of Racine, QC, hung in to net fourth, after a lengthy battle with Bernhard and the Turcotte Performance Ducati Panigale of Christian Allard, from Chambly, QC.  In his first outing with the Ducati, Allard earned an impressive third in Q to start on the front row of the grid, and might have been fourth in the race, but for an off-track trip on his final lap.

There was a good, race-long dispute for sixth, and at the finish Pierre Simard of Stoneham, QC, pulled clear to grab the spot on his Suzuki GSX-R1000.  Yamaha YZF-R1 pilot Vivian Mathews of Clarence Creek, ON, got the better of the race long fight against the Yamaha YZF-R6 of Oshawa, ON.’s Jake LeClair.

Earlier in the program, Philippe Masse of Saint-Hyacinthe, QC., dominated the Kawasaki-backed Pro Sport Bike round for middleweight machines, earning his second straight victory and establishing himself as a favorite for the upcoming Dunlop-backed Calabogie National, July 9-10.

Starting from pole on the grid, Masse pulled away steadily to win by just over 20 seconds.
Veteran Louie Raffa of Saint-Marthe-sur-le-Lac was on form with his Fast Company Honda CBR600RR, getting clear of a trio of riders to net second.  Just behind, LeClair fought with rookie Pro Yamaha pilot Pascal Bastien of St-Eustache, LeClair getting the final podium spot with a late race charge.

The Motul Amateur Superbike race was a barn burner, with five riders disputing the lead.  BMW racer Marc Labossiere of Longueil, QC, charged from third to first on the final tour, earning the victory by just .16 of a second over Suzuki racer Yan Julien of Calixa-Lavalee, QC.  Also, in the thick of the dispute was Nova Scotia racer John Fraser’s Yamaha, making his first Calabogie start a good one with third place at the finish, in preparation for the upcoming National round.

Another thrilling Amateur contest involved Guillaume Lavallee of Sainte-Ann-de-Sorel, QC. fighting with Nolan Eadie of Gloucester, ON., and Bobby Desjardins of Ferme-Neuve, QC.  At the finish of a tense battle, Lavallee’s Kawasaki won by .2 of a second from Yamaha mounted Eadie, while Suzuki’s Desjardins was a further second back for third.

In the Liqui Moly Pro-AM Lightweight final race, Istvan Hidvegi of Mississauga, ON, took the Pro victory on his Yamha, while the Amateur division belonged to another R3, this one piloted by Evan Moriarity of Milton, ON.