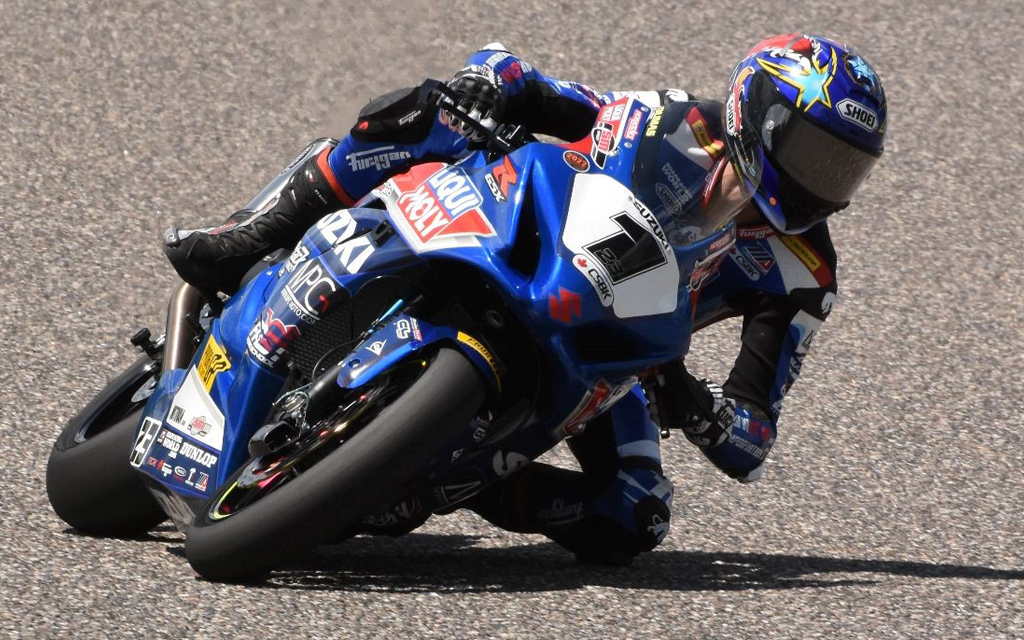 The wait for the 2022 Canadian Superbike Championship season is finally over, as the feature Pro Superbike field prepares for another dramatic campaign entering their round one doubleheader at the Grand Bend Motorplex this weekend, June 9-12.

The 42nd running of the Canadian national championship will kick off in unfamiliar circumstances, as 19-year-old phenom Alex Dumas heads to Grand Bend for the first time in his career to defend his 2021 Canada Cup and number one plate.

The Liqui Moly/FAST School Suzuki rider out of Desmaures, QC, has only appeared at two venues in his CSBK career, but showed zero signs of inexperience at either, winning all four races at Calabogie last season and finding the podium on all three occasions at CTMP. Dumas could continue that trend at Grand Bend this weekend but will surely have to go through his rival Ben Young in order to do so – a difficult proposition at perhaps Young’s best track on the calendar.

The Van Dolder’s Home Team BMW Motorrad rider will be thrilled to return to ‘The Bend’ in 2022, having pushed Jordan Szoke to the limit there in 2018 before beating Szoke one year later en route to his 2019 championship. Having fully shaken the rust off from his 2020 absence, Young will now look to kick off his quest for a second career title in the opening round, a place he should enter as the marginal favourite.

The Collingwood, ON native will surely be looking over his shoulder for Dumas all weekend in what is expected to be a clear frontrunning duo for the 2022 campaign, but there are plenty of challengers to pick up the pieces if the two rivals get in each others way – though that list has shrunk in a big way entering round one.

Fans won’t be able to spot the iconic green Canadian Kawasaki of Jordan Szoke out on track, as the 14-time champion suffered a barrage of injuries in a pre-season motocross accident and is expected to miss the full season. The 2020 champion won’t be alone on the sidelines, either, as fellow fan favourite Tomas Casas will be forced to sit out round one after the Yamaha Canada rider injured his hand in an offseason crash of his own, though Casas expects to be back up at the front by round two in Calabogie.

Leading the charge in their absence will be a wide-open crop of riders, but one with some familiar names at the top. The most likely of the group will be OneSpeed Suzuki star Trevor Daley, who scored a trio of podiums in 2021 and played a pivotal role in helping Suzuki to the inaugural Constructors Championship last season.

Another fan favourite of the bunch will be 2021 Pro Sport Bike champion Sebastian Tremblay, who is turning his focus solely to the feature Superbike category aboard his Turcotte Performance Kawasaki and could play a big role for the brand in Szoke’s absence, though his best hopes will likely come at his home track in round two.

Also in the podium mix all season will be another pair of Quebecois talents, albeit ones at different points in their careers, as veteran Michael Leon returns to the grid aboard his Royal Distributing BMW as does second-year Pro Samuel Guerin for the EFC Group BMW squad. Leon has already scored a pair of top-five finishes in his career at Grand Bend, while Guerin will be heading to the circuit for the first time in his Pro career after a hard-luck rookie campaign for him in 2021.

Grand Bend is also known for its local expertise, and this season will be no different as a group of potential wildcards headline the Superbike grid, most notably SOAR regional champ Steven Nickerson. The Dewildt Powersports Honda rider managed a career-best fourth in his last national appearance at Grand Bend, and could be one of the top podium threats again at his home track to begin the 2022 campaign.

Jordan Royds will also be pleased to return to Grand Bend, as the sixth-overall finisher in last year’s championship has gained plenty of track knowledge aboard his IBEW BMW and could challenge the front-five as well. As for perhaps the biggest wildcard on the grid, former Lightweight star Trevor Dion is rumoured to be sporting a new BMW Superbike for 2022 alongside his Sport Bike program, and could be a top-five threat himself if he decides to run the dual-threat weekend for the LDS Consulting team.

Joining the Pro ranks for the first time in 2022 will be rookies Anthony Bergeron and Pascal Bastien, both of whom could play surprise roles in deciding the midfield as two of the faster Amateur graduates in recent years. Neither have attended Grand Bend before in their national careers, but Bergeron in particular flashed sensational pace in his title-winning 2021 campaign, winning three out of four races on his privateer BMW.

The second running of the Constructors Championship will also have some new names to sport this season, with Ducati and Aprilia expected to join the grid after homologating their race programs for 2022.

It’s unclear who will represent the two Italian factories on the national grid this season, but their inclusion will surely put more pressure on the five returning brands from 2021, while Suzuki will hope to defend their inaugural crown from the growing field.

The opening weekend at Grand Bend will kick off with an official CSBK test day on Thursday and practice day on Friday, before racing properly gets underway for the first of four rounds on Saturday and Sunday.

The full schedule, weekend information, and ticket information can be found on the series’ official website at www.csbk.ca.