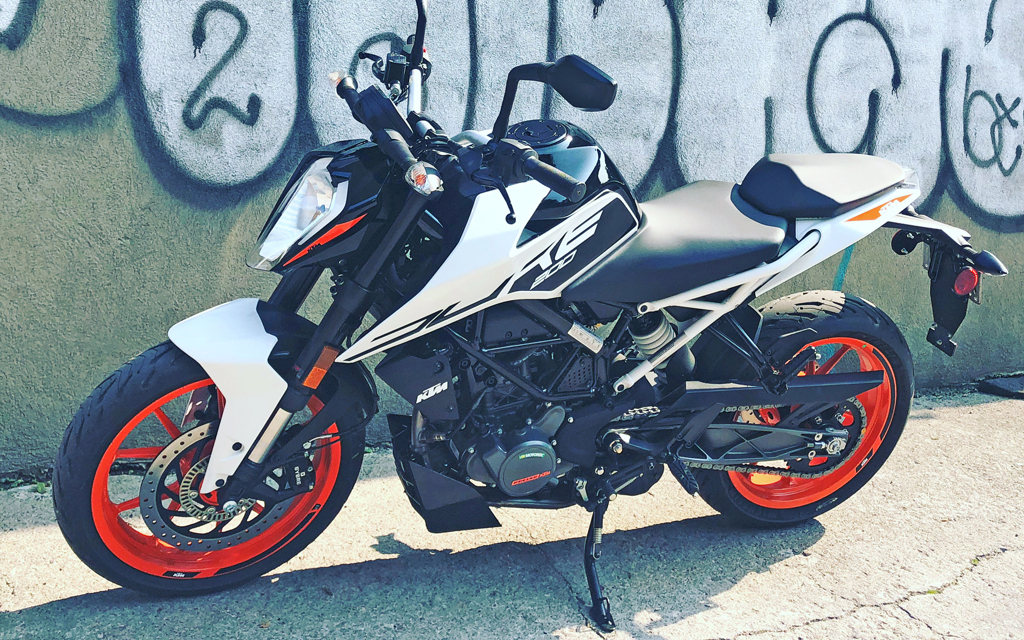 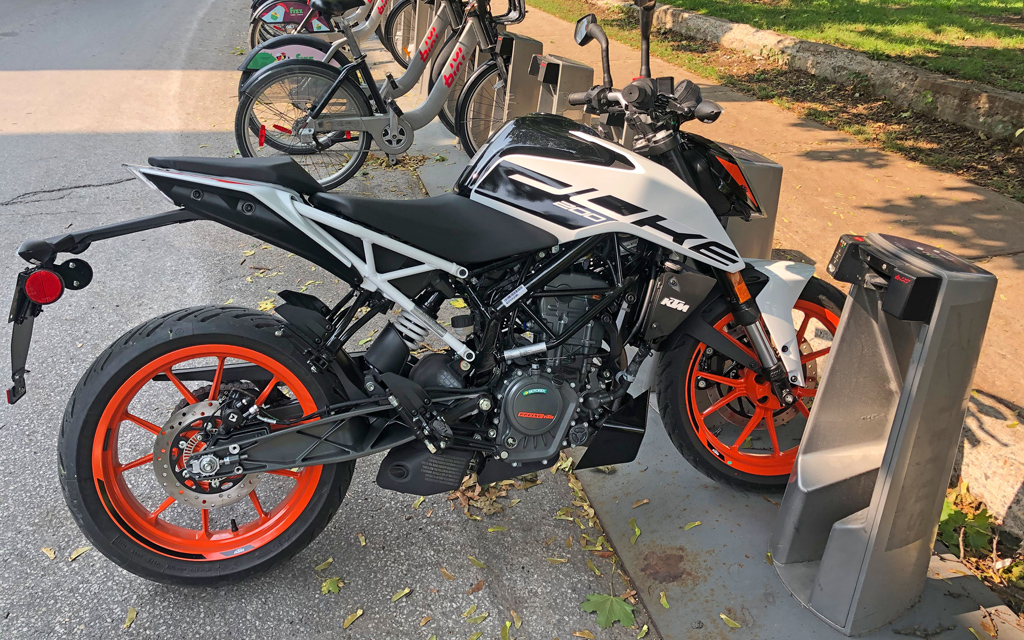 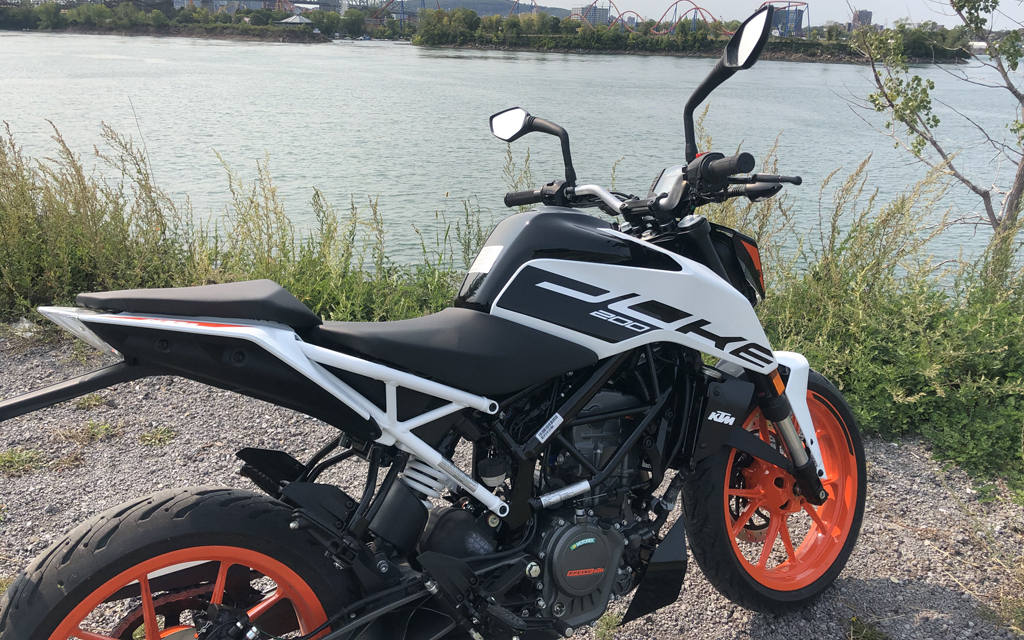 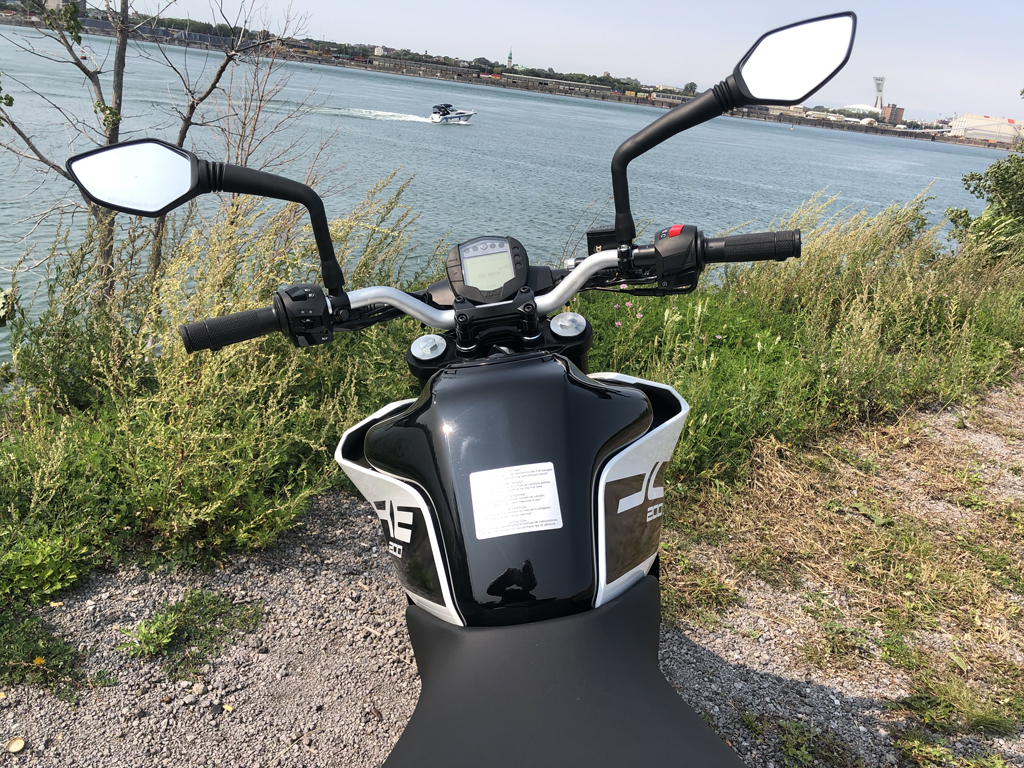 At KTM they strive to fill every crack in the road-bike market as well as off-road and dual-purpose. That’s why it’s not surprising that a small 200 cc motorcycle has arrived in the Mattigofen lineup.

Made in India just like its little sister, the Duke 125, the 200 is mainly aimed at Asian markets but it could very well find a buyer here, too. The Duke 200 shares the same technical elements as the 125, including two-channel Bosch ABS. The two models are so similar that they are difficult to distinguish when looking at them side by side.

But above all, why introduce a Duke 200 on this side of the Atlantic when we already have a 390 that is popular? Isn’t 200 cc a little small for the open road? That’s what was going through my mind as I headed towards the KTM head office in Chambly, a 20-minute drive out of Montreal.

As I walked into the super clean and whiter than white (ok and a bit of KTM Orange) garage, I saw the little rascal: compact without being too small and with aggressive lines very similar to its bigger sibblings. It’s a good-looking bike. Notice I didn’t write that it was a nice little motorcycle. It’s still an almost full-sized build, so it doesn’t look like you’ve stolen your 14-year-old nephew’s bike when you’re riding it.

As I walked around, I noticed an obviously very accessible saddle height of 31.6 inches (803 mm) and a larger and more comfortable-looking seat than I had expected. Some small displacement bikes were known for turning a comfortable butt into a swollen and numb piece of flesh after only a few twists and turns.

Getting comfortable is easy and you immediately feel in full control of this 308-pound (140 kg) bike. A small predatory design and a lightweight tubular steel trellis frame showcase its Duke DNA. The 17-inch cast alloy wheels complete the aggressive look. Using a 110 mm wide front wheel and an impressive 150 mm at the rear, it promises to stick to the road. It was fitted with a WP APEX 43 mm fork and an APEX linkless rear shock.

The front wheel comes with a Bybre four-piston radially mounted brake caliper with Bosch two-channel ABS, as well as ABS Supermoto functionality. The rotors are 300 mm at the front and 230 mm at the rear and the system gives more than sufficient, even surprising (say stoppie!) braking force. Bybre (BY BREmbo) is a Brembo brand specializing in brakes for small and medium displacement bikes so it’s not surprising to find excellent braking abilities here.

The engine is clearly visible through the tubular frame and the WP rear shock gives a racing feel to the little beast. The oblong and vertical lighthouse gives it a family resemblance. Diamond- shaped mirrors as well as large turn signals add to the life-sized look. Out back, there are two large grab handles for a passenger and an elegant LED tail light.

As soon as I start riding the 200, a smile grows on my face. I feel almost rejuvenated as its size and agility remind me of my first bikes. On the other hand, on the engine side, my GT 80 wasn’t in the same universe as this little mill. Thanks to an ultra-compact 4-stroke single-cylinder power plant with advanced fuel injection electronics and a close-ratio six-speed transmission, the new KTM 200 Duke is relatively powerful. For city use, it’s super fun and I find myself wanting to be the first to cross the intersection when the light turns green.

The little Duke strikes a good balance between performance and handling. The ergonomics give us a comfortable freedom of movement, and we do not feel locked behind the handlebar like on

other small displacement motorcycles. The upright riding position favours relaxed rides or pushes us to keep the throttle pinned approaching the apex of every twist the road throws at us.

I had fun rediscovering my city on the Duke. Small isolated streets, graffiti at the end of a courtyard and a street covered by large trees. I, who usually spend hours in the saddle without wanting to put a foot down, was happy to stop to take a photo or have a coffee on a terrace. Not that the Duke is uncomfortable, although the saddle is a bit thin and its ridges a bit too tapered, but rather a great tool to just ride around without any goal but to enjoy myself.

I could have left town quicker but I hung out, foraging from neighbourhood to neighbourhood. However, for those who want to ride for a long time on country roads, the 200 has some good advantages: a dry weight of 308 pounds combined with a 13.4-litre fuel tank allows for a more than reasonable range.

The engine offers a rather strong sound that surprises and pleases. The small engine pulls immediately and the tachometer quickly climbs to 7,000 rpm. It makes you want to rev the little mill to extract all its juice, but it is not even necessary to feel good acceleration. The 26 ponies give themselves entirely for our revving pleasure.

The first vibrations come in at around 6,500 rpm but that’s not surprising or serious. The engine is so flexible that you can start from a stop in second gear or even go very slowly in fifth gear without a problem.

Once out of town, the Duke wants to impress you. It leans into the freeway entrances so much that you have to remember that you are still on smaller than usual tires. We are not, after all, shod like on a Superduke! The little mill shouts its joy at being able to play in the big leagues but it still has to calm down at around 130 km/h, a speed that can be reached with a little patience after putting on sixth gear. This engine is obviously more pleasant for urban use where stop- and-go riding is the norm, rather than for frenzied country rides. It doesn’t have the power for that, although its handling is exemplary.

To keep us informed in this day and age of information, a backlit LCD meter gives us a surprising amount of information. A rare thing on small displacement models, there is a counter, a tachometer, a double partial trip, a clock, a seven-level fuel gauge (plus two for reserve!) a gear indicator, an engine temperature readout and lots of information for stats maniacs. Stats such as: instantaneous consumption, average speed, saddle time, etc. It is almost too complete but also interesting for small talk or bragging rights.

This youngest of the Duke family in Canada has many assets to appeal to urban adventurers as well as motorcyclists looking for a fun, affordable motorcycle that allows them to get away from the city once in a while. It is offered at an affordable price given its impeccable finish and high-quality parts. It also has a particularly nice design and is an undeniable fun factory. It’s a light and agile machine with smile-inducing power that makes it the perfect entry point for the motorcycle world and the Duke family.