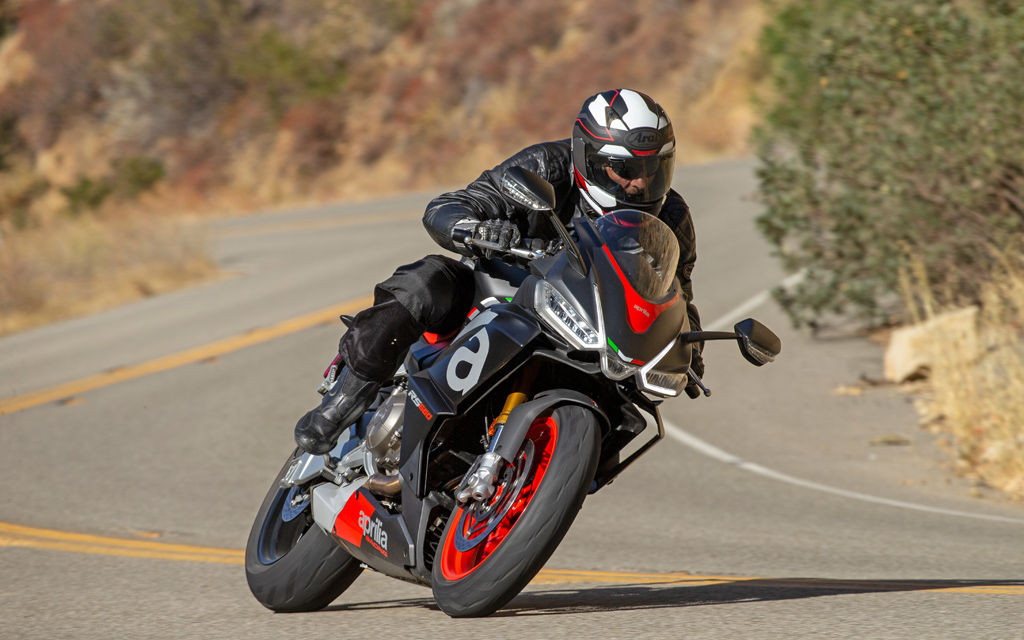 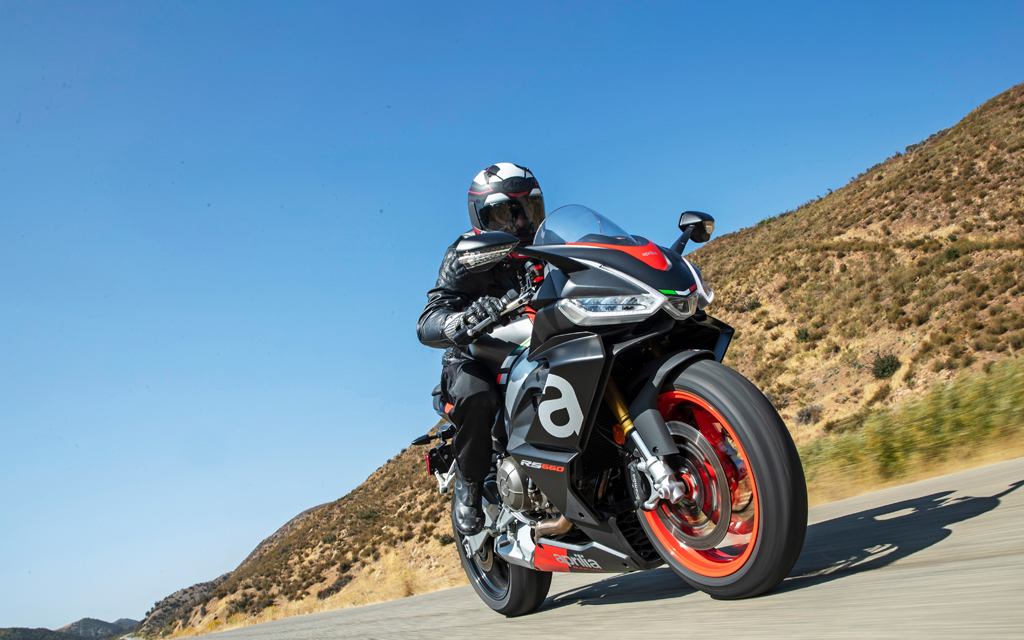 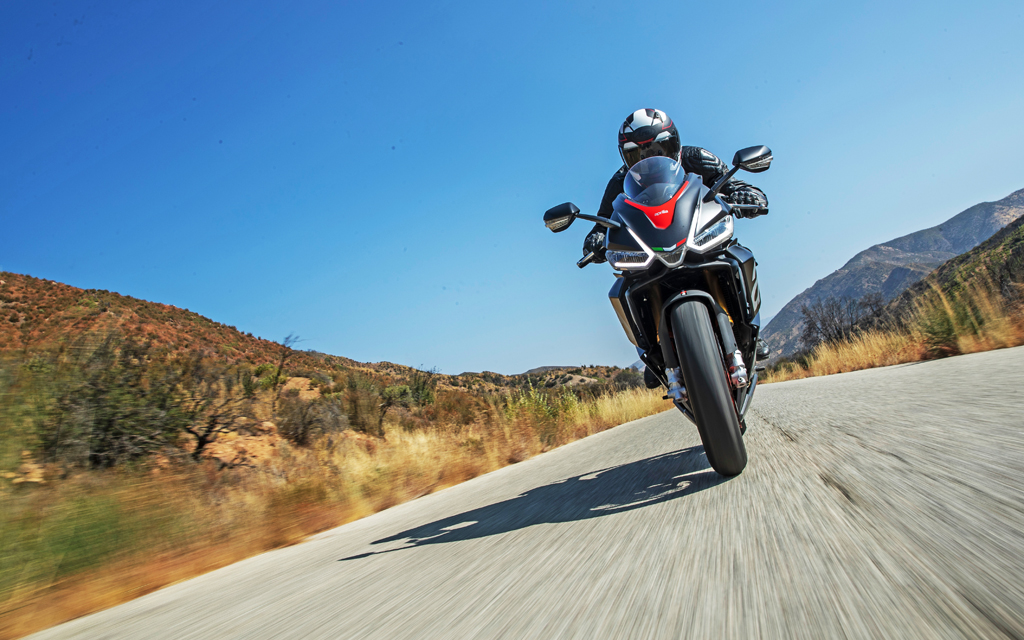 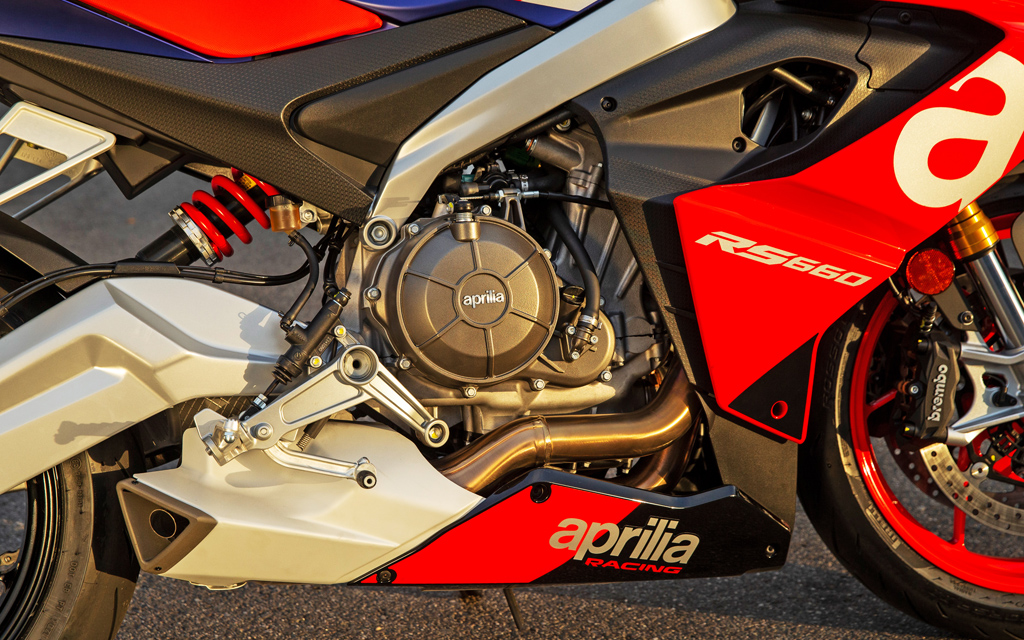 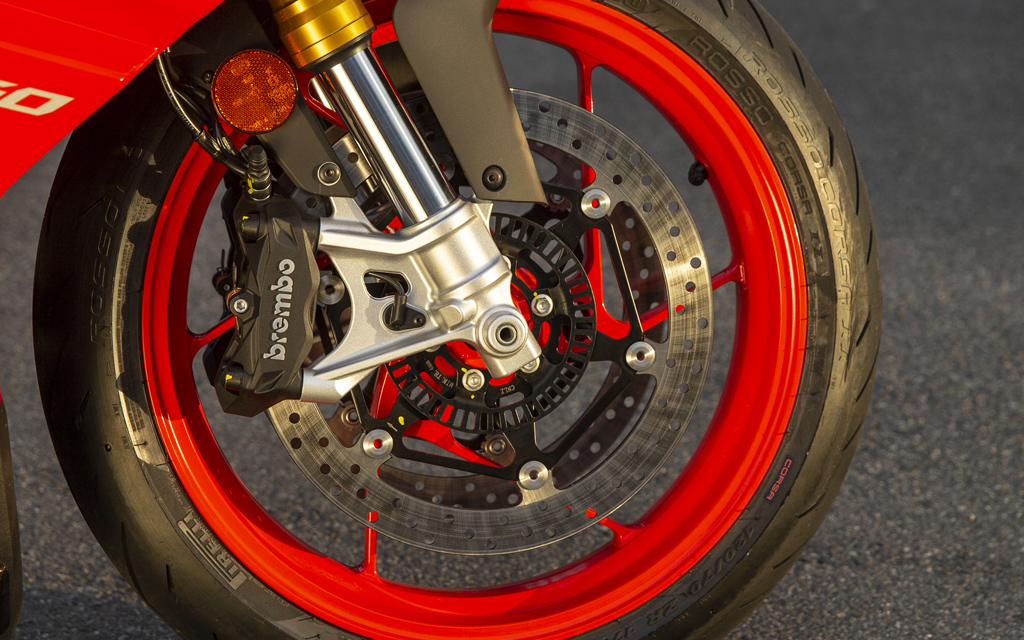 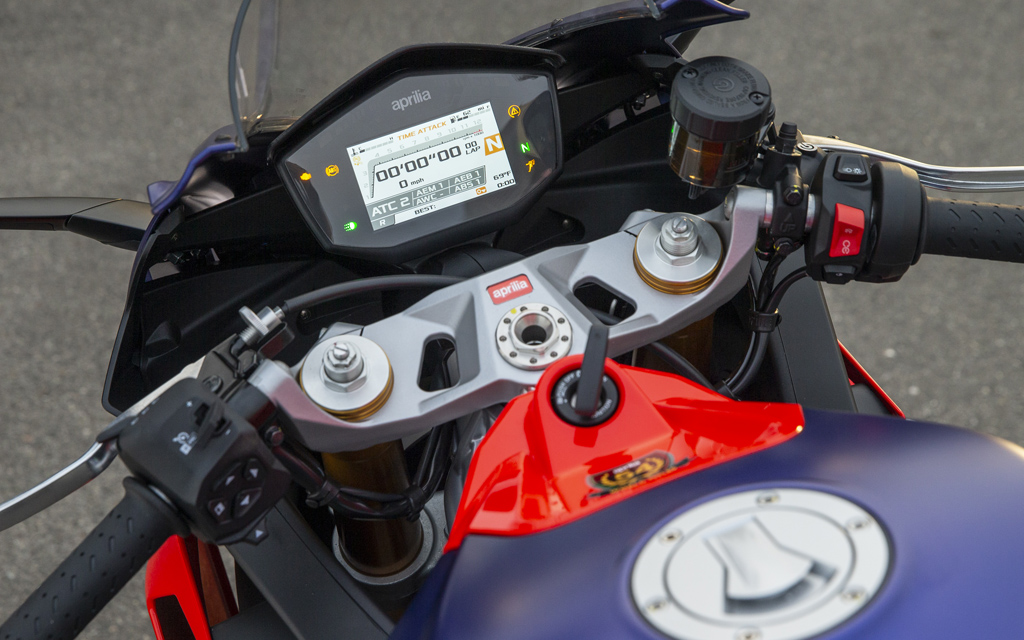 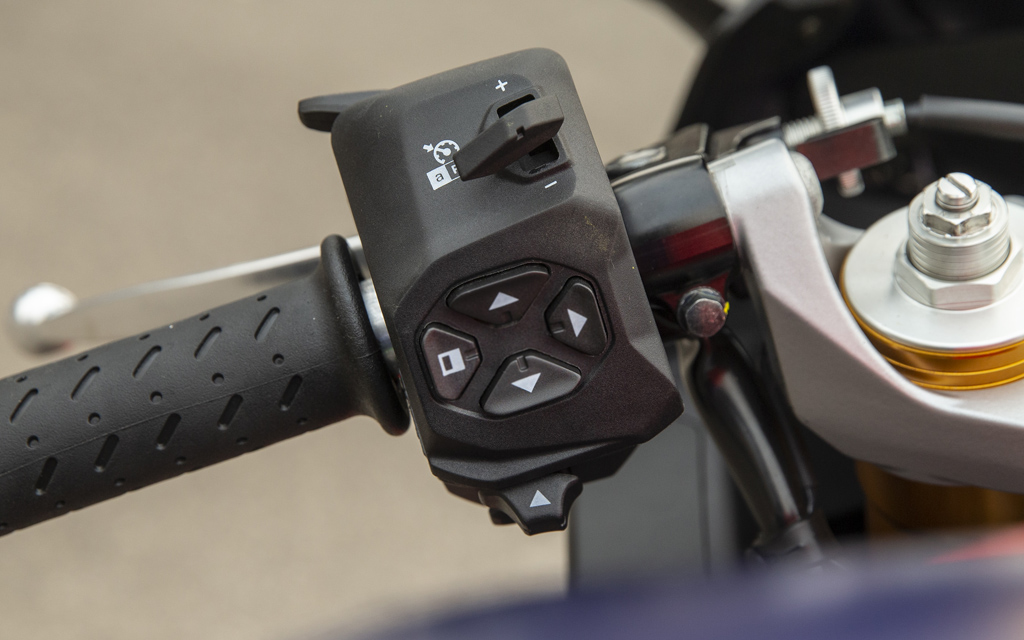 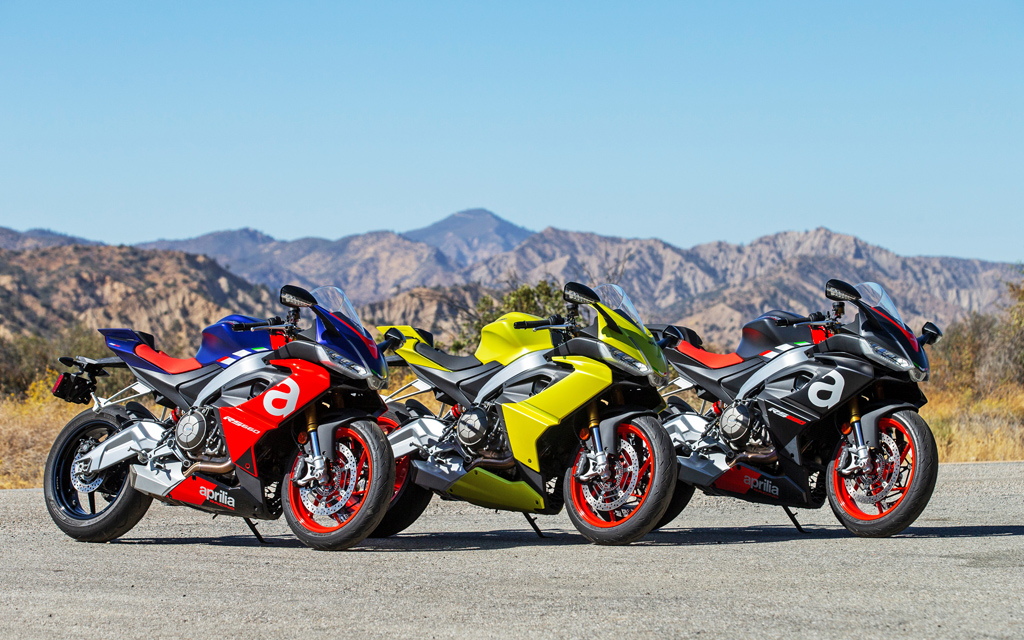 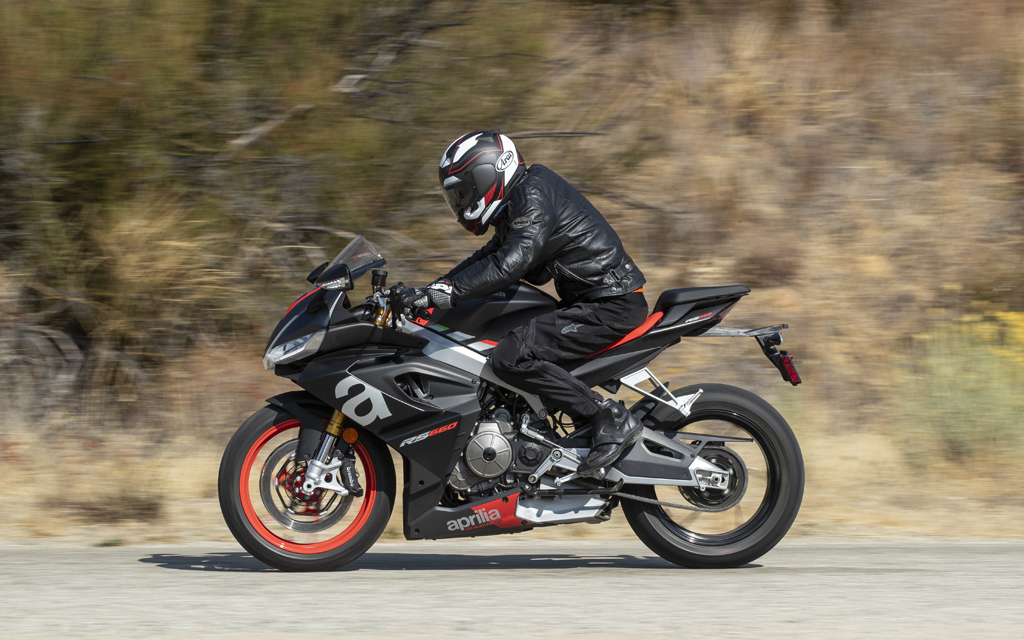 The art of cool

A sensible and chic supersport

Aprilia’s new middleweight platform presents a unique motorcycle proposition. The RS660 is a sleek Italian sportbike but without eyeball-flattening power, punishing ergonomics, or a lofty price.

So, what’s it like? Imagine a steroid-injected Yamaha MT-07 in fine Italian clothes with state- of-the-art technology and Honda CBR600F4 ergonomics. It’s an accessible yet serious sport motorcycle that appeals to riders ranging from the relatively inexperienced to jaded veterans.

An engine is any motorcycle’s heart, and the RS660’s powerplant is nearly all new. In overly simple terms, Aprilia cut the forward two cylinders off its RSV4/Tuono 1100 to create the compact 659 cc parallel twin seen here and that will underpin the upcoming models.

“This is the beginning of a range of bikes we’re working on,” says Miguel Galluzzi, the head of Piaggio Design Center, who famously penned Ducati’s original Monster as well as Aprilia’s RSV4 and this new 660. Coming in a few months will be a Tuono version, and later this year, an adventure-styled Tuareg model.

The powerplant retains the 81 mm bore of its V-4 brother but uses a longer 63.9 mm stroke. It’s purported to deliver 100 (crankshaft) horsepower at 10,500 rpm, an entertaining amount but down 20 to 30 horses from a four-cylinder 600 cc supersport.

For what the RS660 lacks in horsepower compared to its four-pot competition, it claws back a smidgeon in torque production. Peak torque of 67 Nm arrives at 8500 rpm and is slightly more than Yamaha’s R6 produces at its peak all the way up at 11,000 revs.

So, the engine output is adequate, but even more important to consumers is how it pleases eyeballs, and the RS660 is strikingly attractive. There are few external hints the RS is anything but a top-line sportbike, an impression reinforced by the large-diameter exhaust headers (sleeved up from the cylinder exits) visible on the right side. Its three-headlight face with high-end LED lighting “brings the concept of the RSV4 forward,” Galluzzi comments.

Aerodynamics were also important, but, says Galluzzi, “for comfort, not top speed, to take away heat from the rider.” MotoGP-derived winglets are becoming part of contemporary sportbike language, but the RS660’s wing devices are placed vertically at the leading edges of the side fairings. “The aerodynamics are inside the bike,” says Galluzzi. “No moustache wings.”

The aluminum-framed RS660 is agreeably light when lifting it off its sidestand; it’s claimed to weigh just 183 kg with its 15-litre tank full. The saddle is surprisingly plush for a sportbike and pushes the seat height to 820 mm but feels lower once you’re aboard. The narrow engine allows the footpegs to be placed tightly to the centre of the chassis, allowing them to be lower than most bikes in the supersport class while retaining considerable cornering clearance.

A rider is greeted by a 10.9 cm TFT colour screen controlled by switchgear on the left handlebar. A new ECU provides the brains of the RS660, bumping the processing speed of the RSV4’s computer from 50 MHz to 200 MHz and from one megabyte of memory to 4 MB. This uprated ECU will also be used in future Aprilia models. The RS is the first Aprilia to meet Euro 5 regulations.

The faster ECU combines with a six- axis IMU to provide the full gamut of electronic rider aids, including adjustable engine braking that the RSV4 doesn’t have. Cornering ABS is part of the RS660 package, as are ride modes, adjustable traction control, and wheelie control. Bonus tech points are earned by cruise control, self-canceling signals, and auxiliary headlights that peek into corners.

On firing up the RS, ears are greeted by a deep burble from the under- engine exhaust canister. The 660’s 270° crankshaft arrangement mimics the note of a V-twin and retains a bit of the snarl from its V-4 big brother. The slip/assist clutch offers a light lever pull and cooperative friction zone for effortless getaways. A shockingly generous amount of steering lock eases manoeuvres in tight confines.

Once the RS660 is rolling, a rider is no longer required to touch the clutch lever, as the little ’Priller is equipped with a finely tuned up/down quickshifter that executes seamless gear swapping. A broadly tuned powerband (80% of peak torque at just 4000 rpm) requires fewer shifts than a typical supersport, while a counterbalancer keeps vibration from reaching obtrusive levels. Riders are treated to relatively expansive wind protection, with air flowing over the windscreen about shoulder height. Engine heat is effectively routed away from a rider’s legs.

Okay, so most any modern motorcycle is amenable on urban roads and highways, but it’s in the twisties when engineering and R&D efforts either disappoint or shine. Aprilia’s racing heritage has translated well to the RS660, which offers spritely turn-in response thanks to sporty steering geometry and a tidy 1370 mm wheelbase, as well confidence-inspiring feedback when leaned over in corners. The Kayaba suspension lacks compression-damping adjustments but performed without complaint.

While the 600 supersport class seems moribund, the RS660 strikes an invigorating new option for sporting middleweight customers. It has, by far, the most advanced electronics in its class, is powerful enough to satisfy most street riders, and displays high-level cornering chops that will please aspiring racers.

The RS660 is available in Lava Red or the Apex Black of our test bike, retailing in Canada for $13,499. The arresting Acid Gold version has a $300 premium.