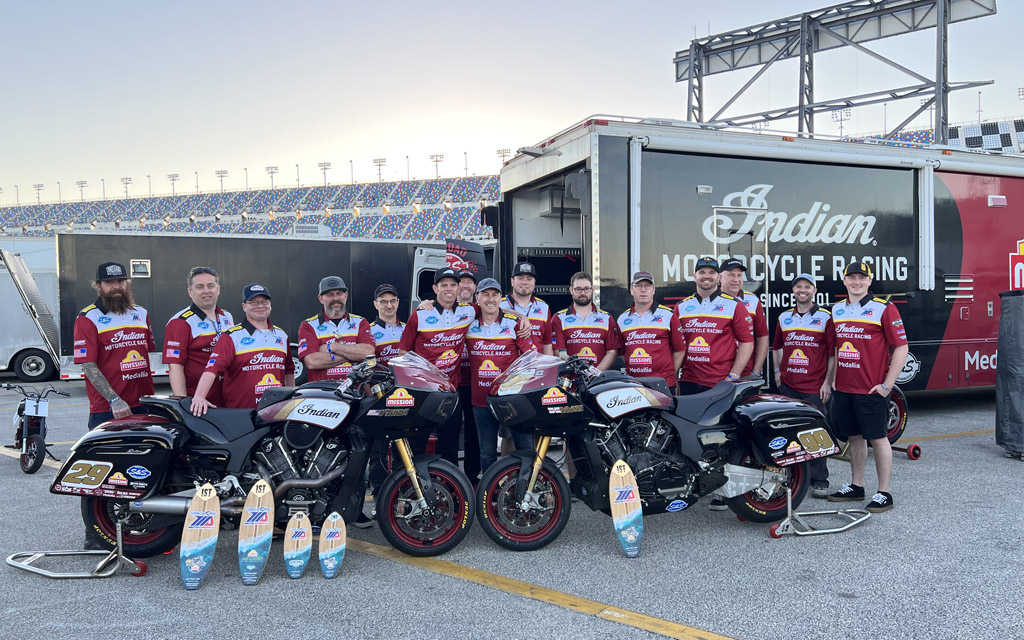 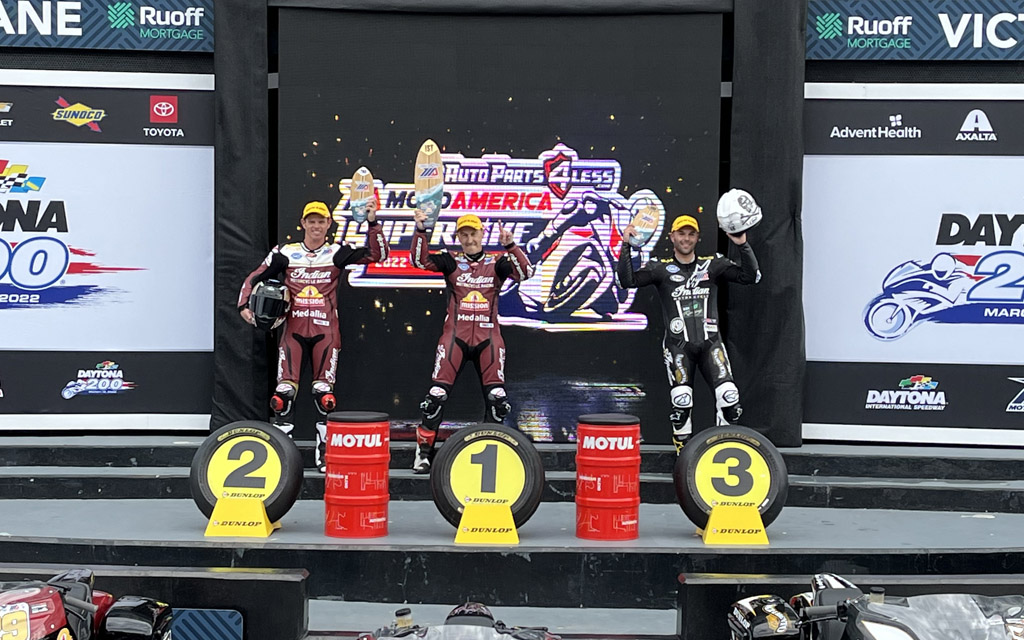 Indian Challengers Go Un-Challenged at Round 2 of King of the Baggers with Podium Sweep Led by Jeremy McWilliams, While Tyler O’Hara Goes Last to First for Dramatic Win in Round 1 – Finishes Weekend with Early Points Lead for the Series

Indian Motorcycle Racing dominated Bike Week in Daytona Beach and kicked off its 2022 race season in dramatic fashion. With factory teams competing in flat track and bagger racing, Indian Motorcycle captured two wins and four of six podium spots at the King of the Baggers opening double-header at Daytona International Speedway, along with a victory at the 2022 American Flat Track season opener at the Volusia Half Mile.

Intent on reclaiming the title of King of the Baggers for its Indian Challenger, Round 2 saw an all-Challenger podium sweep led by new factory rider, Jeremy McWilliams, with Tyler O’Hara and Bobby Fong taking 2nd and 3rd respectively. In Round 1, it was all about inaugural King of the Baggers Champion O’Hara who put the Indian Challenger on top of the box with a dramatic last-to-first victory. O’Hara finished 1st and 2nd in the opening rounds to take an early lead in the 2022 series points race. Meanwhile, the opening round of the 2022 American Flat Track season saw Indian Motorcycle Wrecking Crew rider Briar Bauman deliver a masterful performance on his Indian Motorcycle FTR750 to take the win at the Volusia Half-Mile.

“This weekend was a dramatic display of the incredible level of preparation, determination and skill that powers our teams and riders every time we line up on the grid,” said Gary Gray, Vice President Racing, Service & Technology for Indian Motorcycle. “Considering the stiff competition and unique challenges we’re facing in both flat track and bagger racing this season, we’re certainly happy to get off to such a positive start, but we know full well that this is merely the beginning. There’s a lot more racing ahead of us, and we expect every race weekend to be a dogfight to the finish.”

KING OF THE BAGGERS

Opening weekend of MotoAmerica’s King of the Baggers was nothing short of exhilarating.

In his third year piloting the Mission® Foods S&S® Indian Challenger, O’Hare overcame considerable obstacles in Round 1 to capture his third bagger racing victory. Thanks to a penalty imposed during post-qualifying inspections, O’Hara was forced to start the race at the back of the grid in 13th position. Seemingly unphased by the misfortune, O’Hara literally catapulted off the start, launching his way past more than half the field before entering turn one. From there, he smoothly made his way into third, where he ran for the majority of the race until perfectly timing an incredible move in the final lap, drafting out of the chicane to slingshot his Indian Challenger into first place and take the checkered flag.

“We took a lot of motivation from the disappointing outcome in 2021 and poured it into intensive off-season testing and preparation with the S&S team to ensure we came back strong in 2022, and this weekend was a testament to the dedication, expertise and commitment of our entire team,” said O’Hara. “We’re confident we have the best bike in the paddock, and we intend to prove that again in 2022. We’re off to a good start; but our competition is fierce, and our work has only just begun.”

Powered by its Round 1 victory, Indian Motorcycle Racing took its success to an even higher level in Round 2 with an all-out Indian Challenger podium sweep. After just missing the podium in his Round 1 bagger racing debut, veteran road racer and newest Indian Motorcycle factory rider Jeremy McWilliams battled head-to-head with fellow Mission® Foods S&S® Indian Challenger teammate, O’Hara, ultimately edging him out by mere .025 seconds to capture his first King of the Baggers win and first career win at Daytona.

But O’Hara wasn’t the only threat in this race, while leading into the final lap, McWilliams went high, leaving the door open for Indian Motorcycle privateer Bobby Fong, piloting Steve Delorenzi’s S&S-built RSD Indian Challenger. Fong took full advantage and led most of the final lap, and it wasn’t until the final sprint when McWilliams, along with O’Hara, drafted Fong and made a last-minute pass. While both McWilliams and O’Hara were able to slingshot past Fong, it was McWilliams who was able hold off O’Hara and cross the finish line by slightly less than a bike length.

After weather postponed, and ultimately cancelled, round one of the 2022 American Flat Track season, riders took to the track and kicked off the season at the Volusia Half-Mile II. In spite of significant off-season rule changes that impose restrictions specifically on the Indian FTR750, flat track Wrecking Crew rider Briar Bauman put on a technical clinic to capture the win, making a bold statement regarding his intention to claim his second Grand National Championship in 2022.

Having placed second in Semi 2 and earning a spot on the front row for the Main, Bauman jumped out to an early lead and never looked back – capturing his first win of the season and his 20th of his career. Bauman’s factory teammates, including reigning champion Jared Mees and the Wrecking Crew’s newest rider Shayna Texter-Bauman finished fifth and 13th respectively.

The 2022 King of the Baggers season continues April 22-24, in the Braselton, GA, at Michelin Raceway Road Atlanta. American Flat Track continues March 19 for the Texas Half-Mile at Texas Motor Speedway in Dallas-Ft. Worth, TX.