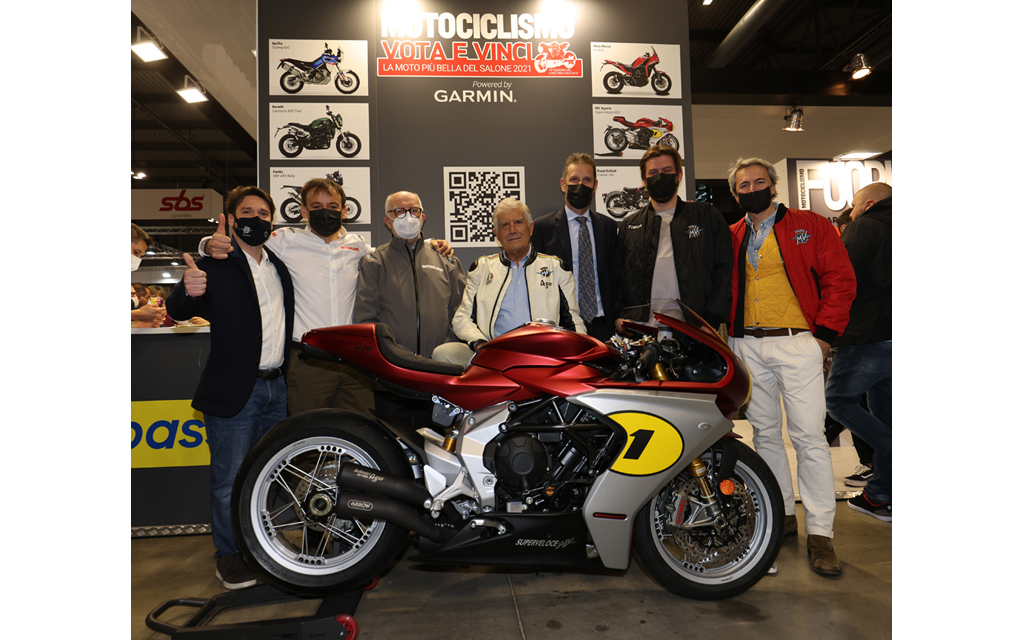 MV Agusta Superveloce AGO voted Best bike of the show

At the 2021 edition of eicma, the world’s most important trade fair in the motorcycle industry

At this year’s EICMA, the MV Agusta Superveloce Ago wins the title of  “Best bike of the show”. The contest, organised by Motociclismo magazine and powered by Garmin, saw the Superveloce Ago taking a head start right from the opening of the 2021 edition of the fair and maintaining a solid lead through the entire week: the new three cylinders from Schiranna collected 47,2% of the votes given by 12.567 attendees. The second place went to the Aprilia Tuareg with 19%, while the Moto Morini X-Cape took third place with 7,9%. The latest addition to the MV Agusta family is an unprecedented piece of artwork and has literally thrilled the public of the show.

The presentation of the award took place this afternoon, on the last day of EICMA, at the Motociclismo booth, in the presence of Timur Sardarov CEO, Filippo Bassoli Marketing Director and Alessandro Malaspina Senior Designer of MV Agusta, Pietro Meda and Paolo Magri respectively President and Managing Director of EICMA, along with Marco Riccardi, hononary director, Federico Aliverti editor-in-chief and Paolo Patruno Managing Director of Motociclismo.

Since its first appearance last month at the Misano race track, the Superveloce Ago has been ranking high on the wish list of motorcycle enthusiasts around the world. The model dedicated to the champion from Bergamo has been produced by hand in a 311 units series, the same number of Agostini’s career wins, while the first fifteen are dedicated to his world championships titles. Every one of them features a carbon fibre plaque commemorating the exact year of each of the titles. Every bike is signed by Agostini, personally, making it a sought-after and prestigious collector piece. Many parts of the fairings are in Carbon fibre, while the Öhlins suspensions are entirely adjustable. The Superveloce’s kit is quite unique and includes an amazing Arrow asymmetrical exhaust system, with two tail pipes on the left and one on the right hand side of the machine. The silver/grey colouring of the fairing is dedicated to the brand’s racing legacy, and is complemented by a bright metallic red, called Rosso Ago, for a stunning livery.

Timur Sardarov commented: “The best bike of show is another great award for us, and a further recognition of all the energy and the resources MV Agusta is consistently putting in the development of new products. Winning this award for the sixth time is a cause of great satisfaction for all of us. I would like to dedicate it to all MV Agusta employees, who put incredible passion in their everyday work.”