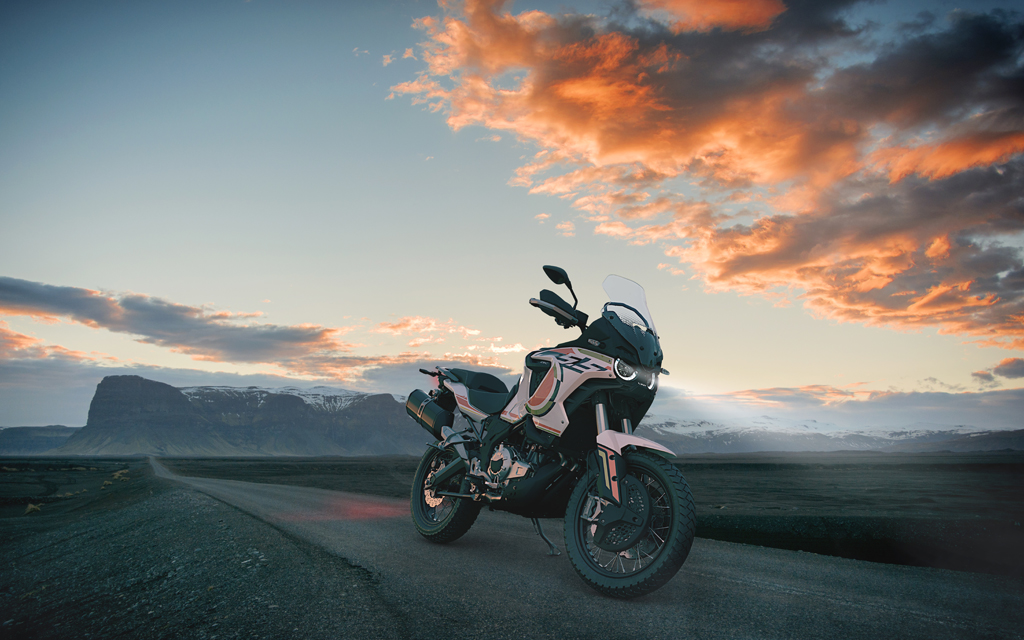 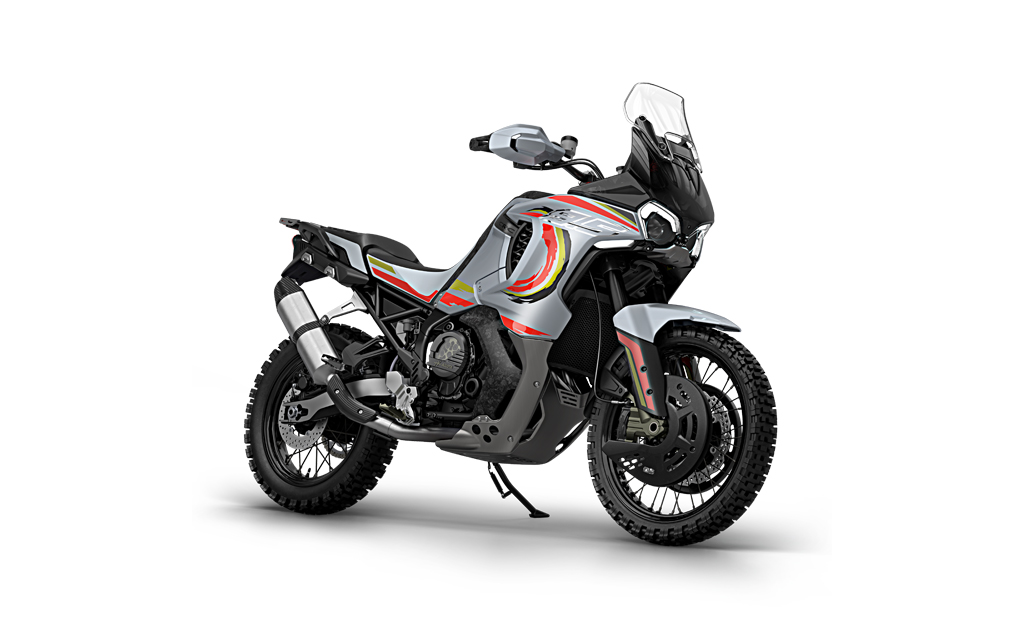 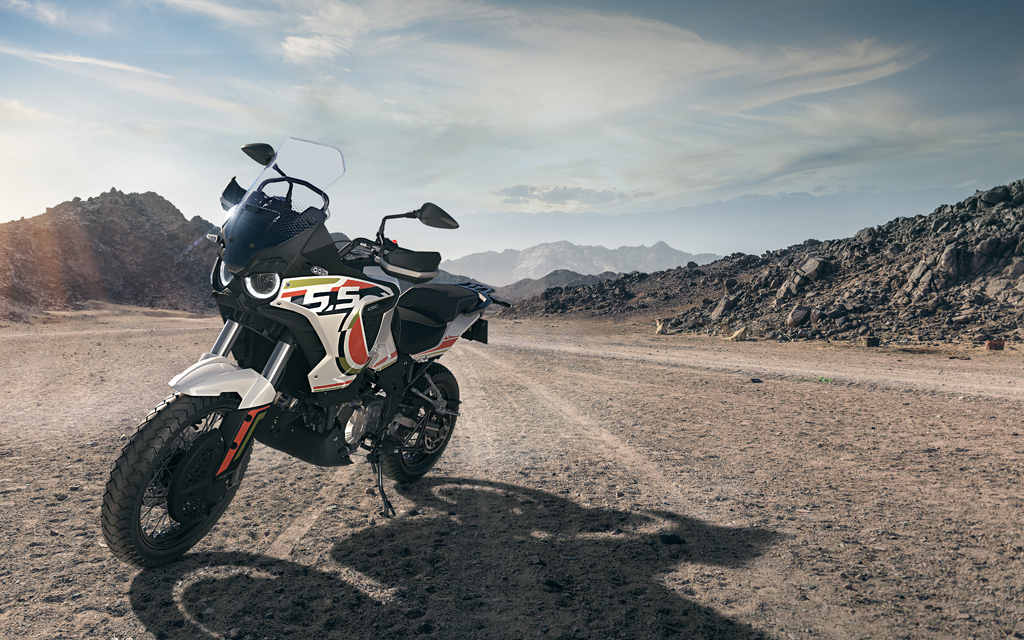 December 26th, 1978. That day marked the genesis of one of the most fascinating and dangerous adventures ever: the Paris-Dakar. Famous rally race crossing the Sahara Desert and born from the irreverent and visionary mind of Thierry Sabine. After its founder’s death in 1986 in the middle of unforgiving Ténéré region, the race has become the test bed for outstanding performance bikes, capable of travelling the desert tracks at insane speeds.

The Elefant model in its Lucky Explorer livery is probably the most celebrated icon of that historic desert raid. From the very first sketches, the evocative power of the Elefant, dominating twice the final destination of Lac Rose in Dakar, has inspired many designers, committed to recreating, in a modern key, that magic feeling of motorcycles recognised as the emblem of the eternal struggle between the crudeness of nature and man. Rock, sand, gasoline and courage: a bunch of crucial elements on which those epic races were based. The “void” embraced full throttle. Looking for the right track, the one that truly makes the difference between a stage victory and an out-of-time arrival at base camp.

It is not just about motorbikes. It’s about a comprehensive ecosystem, which is not only made up of evocative sensations but also deserves off-road effectiveness and skill.

MORE THAN A PROJECT

November 2021. MV Agusta launches the Lucky Explorer Project, a multi-faceted initiative aiming at gathering the passionate lovers of rally raid and off-road racing around Schiranna’s unforgettable legacy of epic participations and victories in the great African rallies of the golden age.

That same spirit of adventure and freedom is the foundation of this ambitious teaser communication project which will be initially developed through digital communication activities followed by others in the real-life world to finally back up the launch of two new adventure bikes.

The Lucky Explorer Project is not just a cold yet smart marketing project. It represents the ultimate character of the Company to express its sentiments in the motorcycle business, revamping deeply the passion, the emotions, the values, the style, the gestures of men and bikes who made the history of racing in the desert. It’s more than a project.

The Lucky Explorer Project has been conceived to create a communication platform to support the launch of two brand new adventure bikes, creating anticipation and thrill, thus:

Lucky Explorer Project is not just about bikes, it’s about a comprehensive world of emotions, memories, values and a way of being. A long-awaited return for all the fans of Made-in-Schiranna, but also a new beginning and a leap into the future.

The project will be developed on the website www.luckyexplorerproject.com and through the Instagram channel @ luckyexplorer.official already online. Riders, personalities, clips and anecdotes, historical factory tours, vintage advertising, videos, memorabilia, new content and events will bring together a real community of enthusiasts. And Lucky Explorer ambassadors will turn up, with access to special content and exclusive previews.

The new 5.5 and 9.5 adventure bikes offer a concrete yet suggestive perspective in an increasingly crowded competitive arena, focused on riding efficiency and stylistic charm, as well as on advanced technical solutions.

Both projects represent the modern interpretation of the desert race’s myth, which appealed the imagination of the Motorsport world since the mid-Eighties, conquering tons of enthusiasts in the continuous search for brand-new and thrilling adventures.

The 9.5 project represents the synthesis of a tireless design and development work that for many months has been aimed at creating a unique bike capable of offering breathless riding experience and user-friendly approach, without forgetting first-rate performance and charm. Compared to many of its main challengers, the 9.5 boasts an unprecedented off-road attitude, thanks to a bespoke chassis formula, starting with the wheel diameter: 21” at the front and 18” at the rear, together with 1,580 mm wheelbase.

The primary goals of the project? Designing a motorcycle that is first and foremost compact, lightweight, essential and functional, with an intense off-road character. On top of this, out-of-the-ordinary versatility married to ability to move effectively and safely in whatever condition, from smooth asphalt to rocky terrain. With the aim to make this exclusive machine even more intuitive and easy to handle the saddle results adjustable in height.

Originally, on the historic Elefant model, at centre-stage in the Dakar races, the Lucky Explorer logo was immediately recognisable, even from a distance, to the point of characterising the whole bike and emphasising its racing-oriented personality. Today, on both new models that logo blooms again thanks to the graphic and set-up winning choices.

The 5.5 version, developed in close collaboration with our partner QJ, is a new adventure bike inspired by the heritage of the Elefant. Despite being a mid-sized bike, its appearance is that of a higher displacement travel-oriented motorcycle, capable of seducing European riders looking for a sturdy and unstoppable companion.

Such close collaboration with the partner has brought to life a truly advanced model if compared to the starting model: electronics, mechanics and chassis, in fact, have been carefully developed on the basis of detailed specifications. Electronics, for example, has been optimised to offer the perfect combination between performance and safety. The two-cylinder in-line liquid-cooled engine with double overhead camshaft distribution has also undergone specific refinement, aimed at further improving the high efficiency. The increase in displacement up to 550 cc (70.5 mm bore and 71 mm stroke), a distinctive content for this model, has the goal to further enrich the torque curve and smoothen delivery at all revs. That is what a motorcycle with such a wide spectrum of use deserves.

Distinctive design of the 5.5 version can be seen both from the superstructures and from other aesthetic crucial features, such as the bespoke optical groups. Stylistic inspiration is shared with the 9.5 model and inspired by the legendary races in the desert, not to mention others features, which allows this new born to proudly claim its technical, conceptual and aesthetic identity.

The 9.5 truly introduces a gateway to the future in the shape of a premium adventure bike, faithfully based on the new MV Agusta 950 engine, powered by class-leading technology and close to that racing spirit of the original Elefant.

The two new models share numerous stylistic elements: the front end area and the sturdy handguard, for example, are both painted black. A side cover protect the radiator, which reveals a semicircle element in the central portion. Furthermore, a cover protects the front braking system, with a large flap to ensure the discs the right dose of air flow; the skid plate underlines the destination of the bike, which therefore results particularly off-road oriented. Even the extended use of high-technology materials along with their finishing are nature-inspired: the forged carbon fiber element, a link between the radiator area and the skid plate, reflects this vision.

The instrumentation is automotive-standards developed: that is true in terms of easy-to-understand graphics, full suite of useful information as well as connectivity. It can count on a 7” full TFT panel, with Bluetooth connection to smartphones and Wi-Fi. The electrical switch cubes have been exclusively designed for this model: inspired by functionality and ergonomics criteria they allow the user to easily navigate amongst the numerous configurations available in the menus. In addition, a practical pannier fastening system, located in the tail area, comes with a retractable system: a smart solution that does not compromise the design of the bike.

The optical assembly has been subjected to an extensive study, aimed at offering a stunning stylistic result and an indisputable light output as well. In particular, the 5.5 mounts DRL in a semicircle, which are clearly inspired by the classic Elefant 900. The optical assembly of the 9.5 is instead more complex and even more original, thanks to two concentric elements that add the front end an aggressive look.

The chassis of the 9.5 is made of steel, with a closed double cradle structure. Designed to offer the best balance between the comfort required for touring road use and the stiffness to achieve interesting off-road performance, it is composed of forged and extruded elements, based on the loads required at different areas. Despite the excellent torsional strength and longitudinal stiffness values, it stops the scales at a mere weight. The sturdy swingarm makes use of lightweight aluminum alloy to achieve the highest strength-to-weight ratio. Aluminum is used also for the fork plates, while the rear subframe is made of steel.

The 9.5 engine has been developed specifically for this model and creates an uncompromised balance of versatility, power and weight. Signed by MV Agusta and inspired by the well-known and admired 800 three-cylinder in-line, it is new in most of its components. The bore and stroke measurements have both been increased to achieve the effective displacement of 930.63 cc, delivering the highest possible values ​​of power and torque. All without changing the overall dimensions of the 800 engine currently in production. Numerous technical contents are confirmed, such as the head plane, cylinders angle together with the position of the motor mounts on the three axles and of the front sprocket.

The new 9.5 motorcycle also stands out for its three-cylinder in-line four-stroke liquid-cooled twin overhead camshaft engine boasts a compression ratio of 12.5: 1; the crankshaft is counter-rotating, to improve driving dynamics and reduce inertia. The removable gearbox is also offered in an unprecedented electro-actuated configuration, specially designed for this model. The maximum power and torque values ​​are respectively 123 hp at 10,000 rpm and 102 Nm at 7,000 rpm. The specific hp/l power is 132.25 while the complete mass of the engine is only 57 kg.

The transmission can count on a new primary drive gear with straight teeth, with power take-off from the countershaft; the gears of the pump control are unprecedented. The base has been completely redesigned: it has integrated oil passages while the passage of water from the upper to the lower base takes place via an external aluminum pipe. What’s more, clutch, generator, starter, selector and gearbox covers have been redesigned.

The 9.5 wet clutch comes in two versions: the automatic Rekluse variant and the standard, featuring hydraulic control on the left side. Lastly, the electro-actuated gearbox, offered as an option, represents a rare gem.