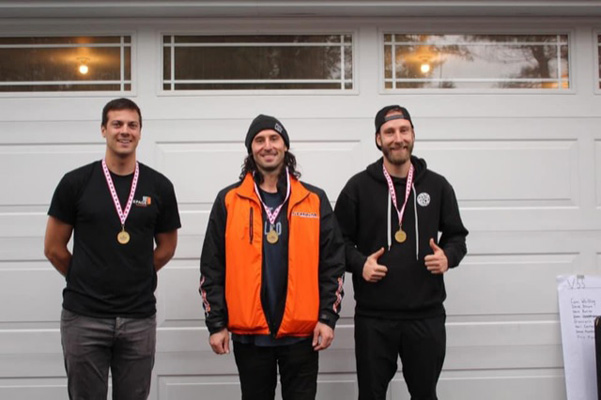 October 2/3 saw Arden Ontario host the first national observed trials championships since 2019. Due to the relatively unstable footing the COVID 19 pandemic has provided for us all the announcement that the event was taking place was only able to be put out with just over three weeks notice. Taking on this mammoth task on short notice were land owners and clerk of the course Dave Southam and his wife Pat Southam. Despite the short notice several of Canada’s top trials riders were quickly able to make arrangements to attend. Veteran Sean Bird and number one plate holder Alex Walton of BC were in attendance. Sean having his bike transported across the country by his sponsor Don Doerksen of Cascade motorsports Canada’s scorpa distributors.  Alex’s bike was shipped by his sponsors The Clark family owners of Mountain Motorcycle who are the distributors of TRS motorcycles in Canada. While in Ontario Alex was helped by Dave Butler of D&J motorcycles. Also making the long drive from Rivière du Loup Quebec was the Bélanger family Paul-Yvan, Felix and Michel all riding motorcycles supported by Beta Canada. Ontario was represented by Brian Wojnarowski riding TRS who was fresh of a top 6 placing overall in the gruelling Corduroy enduro the week before. Kevin Cordy riding Beta who’s been having a great season in the Ontario series and experienced  Jonathan English supported by Gas Gas Canada.

In addition to the championship class 35 riders representing three provinces were set to test the challenging sections layed by Mr Southam and friends. Steady rain, heavy at times was to make the already difficult sections even more challenging as traction was at a premium all weekend. Sean Bird was the rider best able to find the grip on the huge granite rocks and muddy hillsides. Some great aggressive riding from Sean easily securing him the win Saturday in the championship class. Alex Walton looking strong and bringing his TRS home in second place and Felix Bélanger (Beta) a close third. Brian Wojnarowski who came in fourth had some great rides and also  escaped serious injury after dislodging a massive Boulder aboard his TRS, slightly traumatizing the observers in the process.

There was an entirely new course layed out for the riders Sunday. Which saw the weather improve slightly with just light rain throughout the day. Bird and Walton started strong again with Jonathan English waking up on the right side of the bed after scoring a single dab on the massive wall in section 10 early in his first lap.

Ontario’s Kevin Cordy showed he has what it takes to win at the top level in Canada. Cordy used his excellent technique to win the day by a single point over English and Walton who were both tied on seventy five points after thirty three observed sections. English took second after the tiebreaker was decided by the benefit of having more 1’s throughout the day.

Sean Birds day had gone bad early as he had an awful crash early in his first lap while trying to save a three. He fell backwards of a wall landing with his back on a rock and the bike landing on top of him. Bird carried on after a short break to recover himself. Wearing a life jacket to protect his injured ribs he brought his Scorpa home in fourth. Which was good enough to land him a national championship by a single point over Walton after two days of competition. No doubt that fact will make his ribs feel a little better as he heads back home to BC.

Cambareri again came home in first in the advanced class and Alex Dagenais first again in intermediate. Both taking home championships in their respective classes.

Overall it was a successful weekend of competition. It was great for our riders from across the country to get together again  and push each other against the terrain and the elements. We are all looking forward to the nationals carrying on with strong events such as this one across our great country.