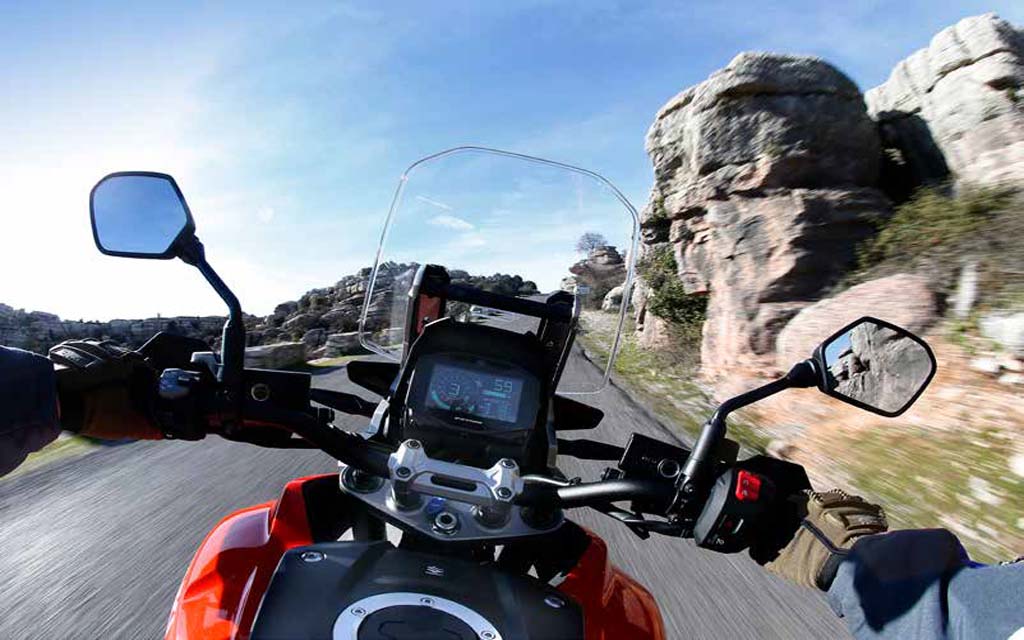 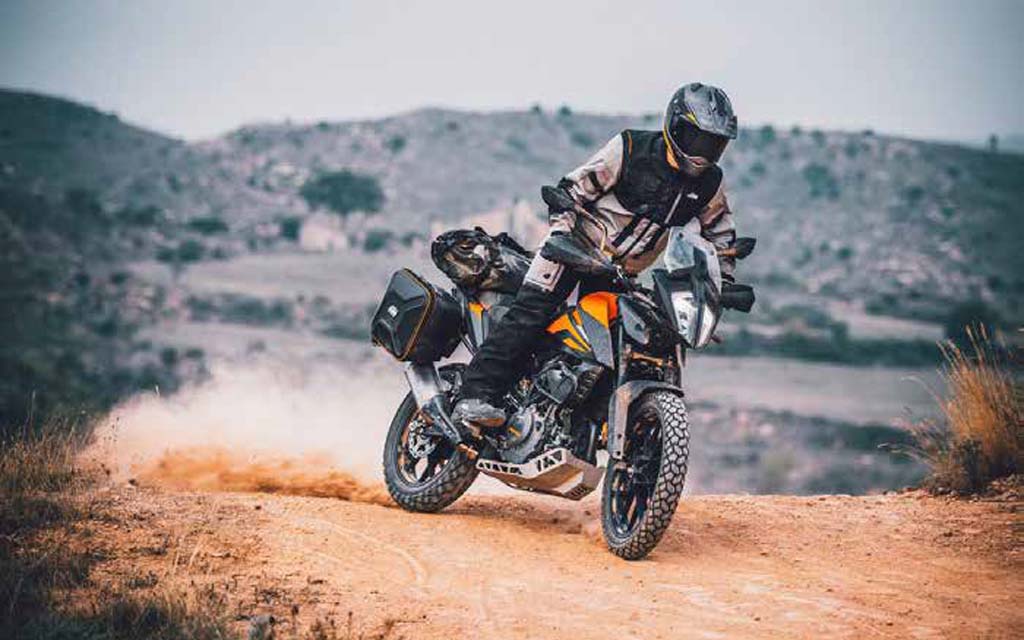 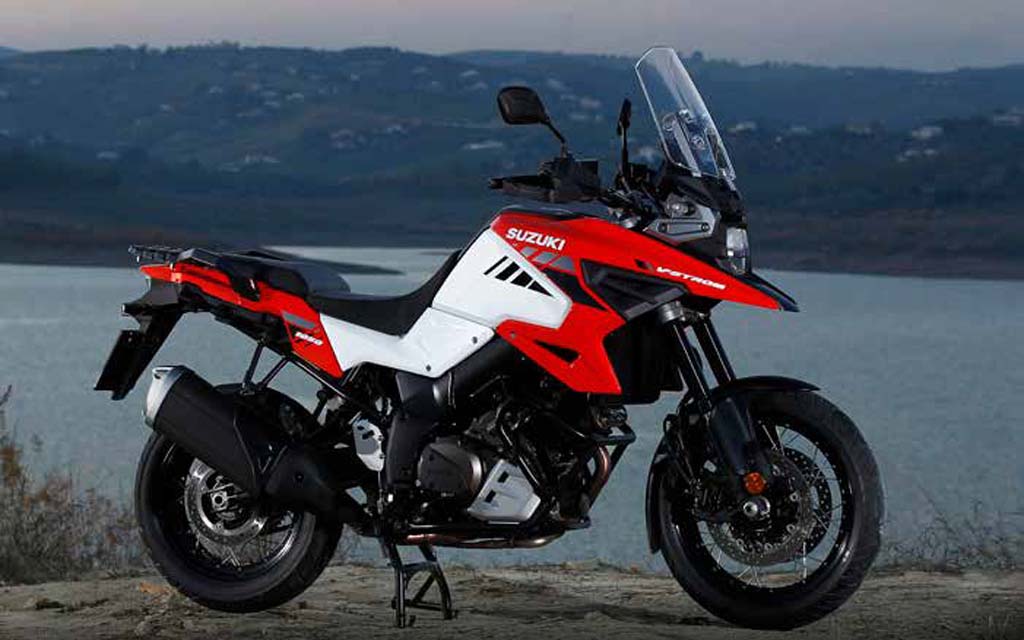 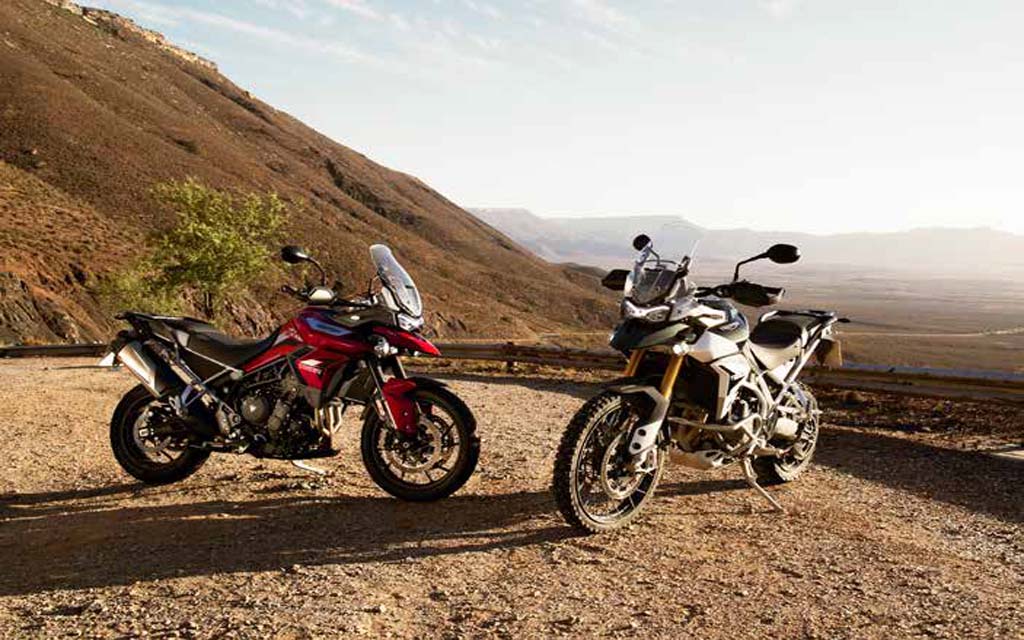 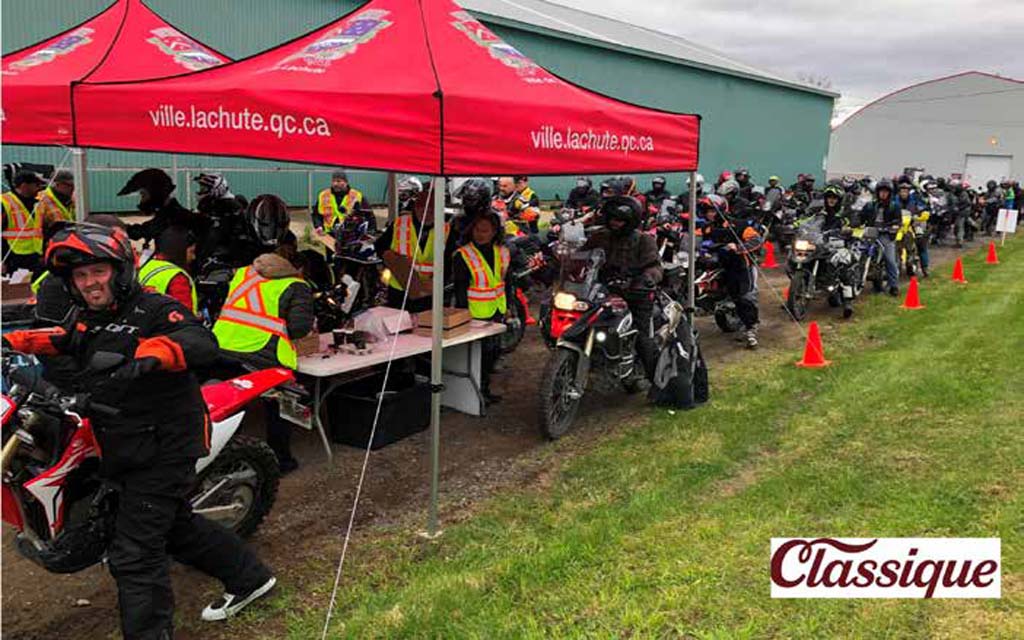 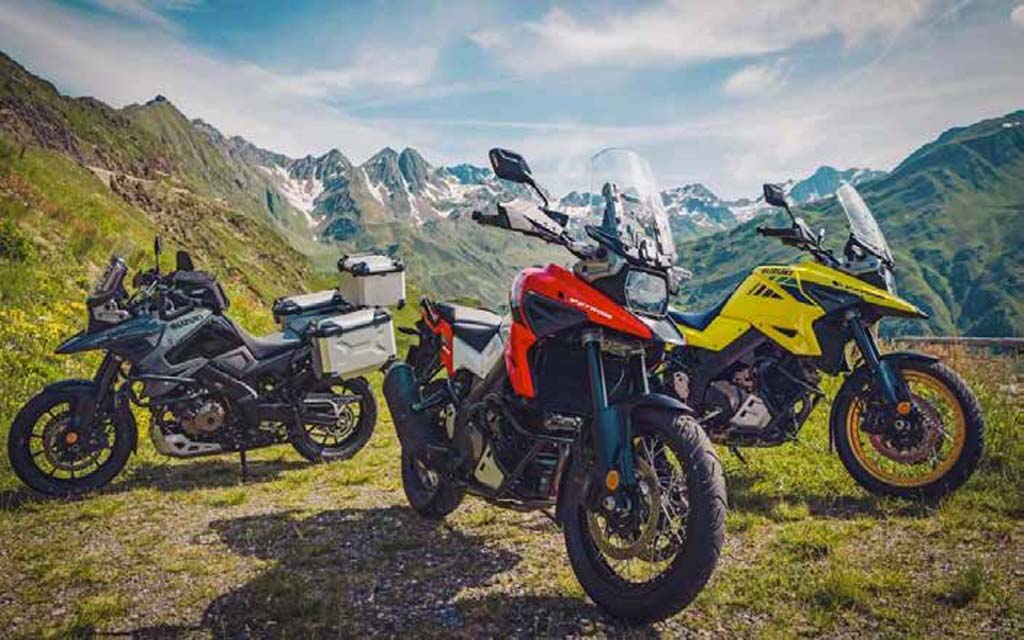 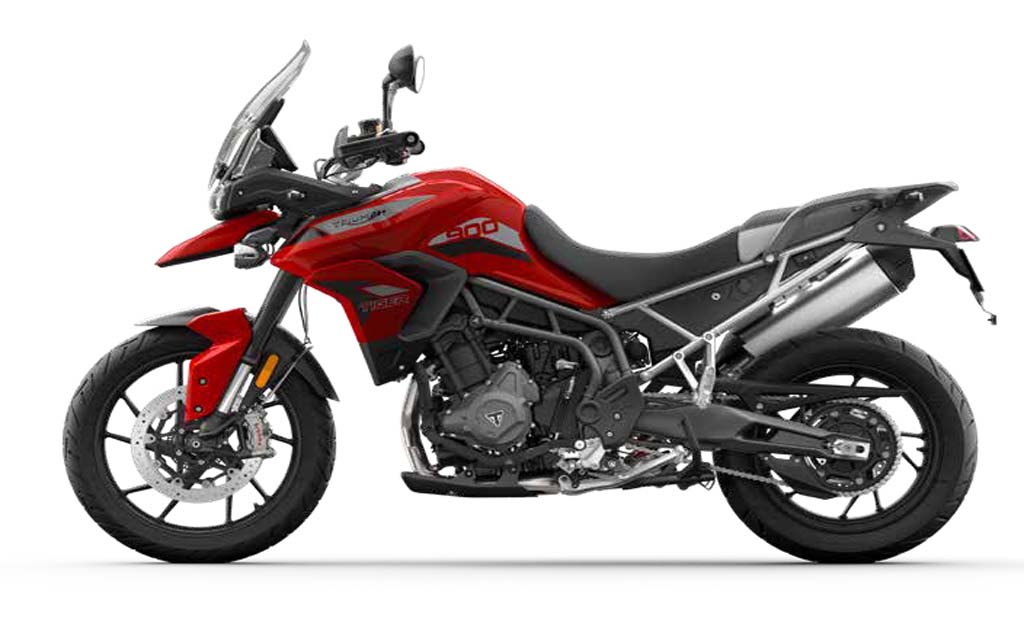 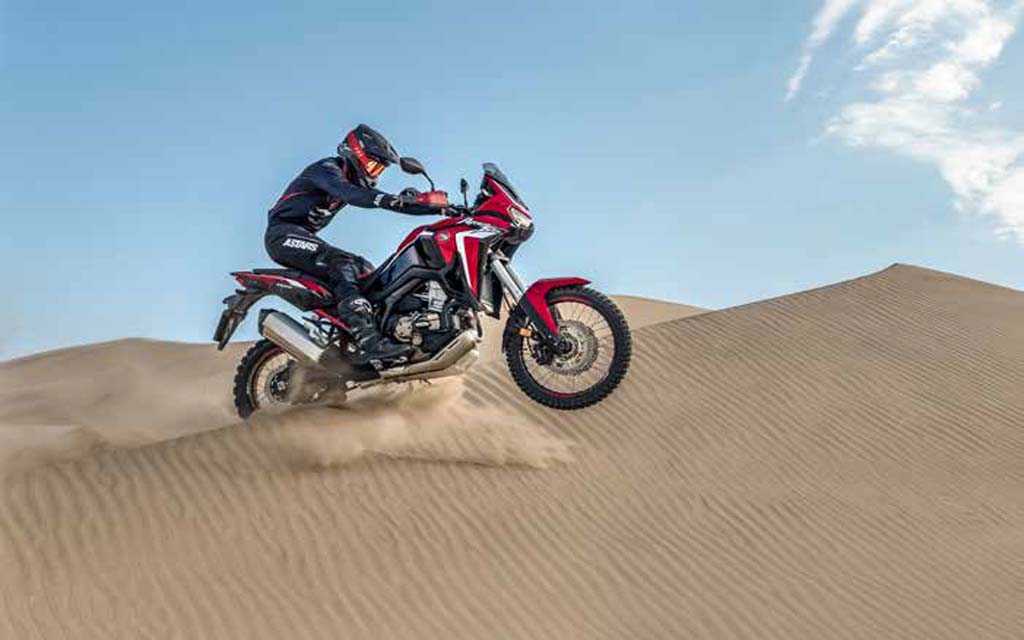 Adventures in motorcycling – Taking off on 2 wheels

You may have seen Claude Lelouch’s cult movie L’aventure, c’est l’aventure! This film is filled with many of the fine ingredients that make Adventure motorcycling so great. It connects with the dream of going around the world on two wheels, seeing extraordinary landscapes, and meeting locals fascinated by a mysterious dusty rider on a high-perched motorcycle carrying the bare minimum in two square metal boxes. Well, I’ll tell you a secret: this dream is accessible!

Many riders did it, including a few women such as pioneer Anne-France d’Hauteville who did her first around-the-world tour in 1973 on a 100 cc Kawasaki!

The legendary Paris-Dakar race, the real one, organized by Thierry Sabine, did a lot to stimulate people’s dreams of freedom and adventure. The original rally was taking off from Paris, right on Place de la Concorde. The riders drove south to Marseille’s harbour and then through four or five African countries before they would make it to Dakar’s Lac Rose.

Images of motorcycles flying over sand dunes, filmed from helicopters, became an inspiration for many. There were unforgettable moments. In 1987, Hubert Auriol fell and rode the last 20 km with two broken ankles (one with an open fracture), and Cyril Neveu eventually won the race.

These rallies prompted manufacturers to build adventure-oriented motorcycles. The first ones were Honda’s 500 XLS, Yamaha’s XT and then Ténéré, BMW’s GS, KTMs, Suzuki’s DR and Kawasaki’s KLR. As years went by, models kept evolving and displacements kept rising, reaching up to 1,250 cc for the current BMW GS, and even 1,290 cc for KTM. But nowadays, we are also beginning to see adventure bikes with smaller engines. Yamaha now offers the 700 Super Ténéré and KTM launched its 390 Adventure, a fine way to join the fun while saving on registration and insurance fees.

The differences between adventure and enduro bikes

Adventure motorcycles are dual-sport machines with all the required equipment to be ridden legally on the street. Their gas tank usually contains enough fuel to cover some 200 km and their ground clearance allows the pilot to ride over obstacles. The suspension is reinforced for off-road riding and for carrying big panniers filled with all kinds of stuff.

Enduro motorcycles are not street-legal. They are closer to a full-on competition machine, their displacement is typically 450 cc or less and they have smaller gas tanks to cut down on weight. In Québec, enduro machines can be used on FQMHR trails as long as they are equipped with a white headlight, red tail/stoplight, plus a left mirror and speedometer.

Adventure motorcycles are versatile; you can ride them on highways or on gravel roads. In Québec, agreements have been concluded between the off-road motorcycle federation FQMHR (Fédération québécoise des motos hors route), represented by general manager Benoit-Gilles Depont, and quad clubs to allow enduro and adventure motorcycles on the federated trails. These well-maintained trails total more than 10,000 km, and even more with the recent addition of the Iroquois and Gatineau Valley Quad Clubs, thanks to the help of Marc Chartrand. The $145 access fee allows motorcyclists to use the trails from May 1 to November 30 (when there are no coronavirus restrictions). On the FQMHR site, the Know How to Venture Out page will help you get started and see the list of motorcycles admitted on the trails. You can also download the GPS iMotoHR mobile application to discover the 10,000 km trail network, find your way around and get tons of other useful information.

This network of federated trails is really fine and unique. Other provinces do have trails, of course, but they are shared with other users (bicycles, horses, hikers) and they are generally not as neatly maintained as the quad/motorcycle trails.

Adventure motorcycle riders are not different from other motorcyclists: they like to travel around. They just do it differently … riding through gravel, dirt and mud to test the limits of their machines and enjoy that great feeling of solidarity and mutual help in the middle of the woods. It all started with the Ride à Touche, organized by Marc Dubois. A few years later, in 2007, it was reconducted and renamed La Classique by Marc Chartrand with the help of Dave Renouf, Josée Barnes and a few others. That was a classic ride involving 60 riders. In the meantime, the Ridaventure forum was created; it brings together close to 10,000 members and is part of the FQMHR.

Known as Canada’s biggest quad and adventure motorcycle event, La Classique now welcomes more than 500 motorcycles and 100 quads in Lachute, Québec. This year’s edition was scheduled for mid-May; it has been cancelled because of COVID-19, but it will be back in 2021. The event takes place over three days with a base camp, a big tent, exhibitors, test rides, and various activities. But the core of Classique is, of course, the seven rides you can choose from. They all are 325 km long but the difference is night and day between the Panoramique for beginners with 80% paved roads and the Grosse inconsciente (Totally Reckless) or Extrême for experienced riders on mid-size and big-bore machines. To make it through some of the obstacles of these very technical courses, you may need help from your fellow motorcyclists. So it is not just an off-road adventure, it’s also a human adventure. Quad riders also have their ride, organized by the local club Montagnards and the Québec quad clubs federation FQCQ, both partners of this event.

Ridaventure also organizes other events; check out their forum or Facebook page.

MTA is a club for Québec dual-sports riders. Many activities are organized for members, such as group rides with specific requirements for helpers and insurance with civil liability. The nonprofit organization also offers workshops on motorcycle maintenance, using a GPS or getting back in shape at the beginning of the season. As a member of FQMHR, Moto Trail Aventure also promotes the use of the federated trails. This club can be a fine gateway to the world of Adventure motorcycling.

Sales are up in Canada

Sales of dual-sports motorcycles are on an upward trend in Canada. The Motorcycle and Moped Industry Council, the organization representing motorcycle importers, has reported a 3.53% increase of new dual-sports bikes for Canada in 2019, whereas the global sales increase was 1.53% for the same period.

For the first two months of 2020, Canadian sales of adventure bikes were up 22%, while the global sales increase was 7.44%.

Many motorcyclists have proved that the entire world could be within reach of dual-sports motorcycles. But in this pre-deconfinement period (inventing new positive words here!), why not plan on installing dual-purpose tires on your bike and ride closer to home? That would help local businesses and you could discover great new territories. In Québec, for example, who knows firsthand Natashquan, the birthplace of Gilles Vigneault, or the Sainte-Philomène falls as seen from the walkway built by the Matapédia Valley Quad Club? I’ll stop here; a full book could be written on this subject.

In 2017, the Motorcyclists Confederation of Canada presented a study on the economic impact of off-road motorcycles in Québec. Expenses were estimated at $185 million and jobs at 3,700. Though the specific portion of adventure motorcycling is not available, it is not negligible, and that makes for a new challenge for the two upcoming seasons.

In a forest environment, certain rules must be respected. In Québec they are defined through the Act respecting the conservation and development of wildlife (Act C-61.1) and applied by the Ministry of Forests, Wildlife and Parks.

It is strictly forbidden to cross a watercourse or to ride into it on a motor vehicle. This applies to any body of water with animal life, even on private land. There are 3.6 million waterbodies in Québec, so plan accordingly. The minimum fine is $250 per wheel if you are arrested.

Act C-61.1 also stipulates that “No person may pursue, mutilate or deliberately kill an animal with a vehicle.” Running after an animal for 10 minutes can greatly compromise its health. Such an intense effort produces lactic acid that reaches the blood and can cause death.

Finally, the Act respecting off-highway vehicles stipulates that a person driving an off-road vehicle on a private land without an authorization from the owner and lessee is subject to a fine of $450 to $900.

Adventure motorcycling is hot nowadays. You can discover this fascinating world with organized groups like Ridaventure and Moto Trail Aventure, both members of the FQMHR.

But adventure motorcycling is not a simple trend, it is a way of life, a fine opportunity to run away from paved roads, meet great people and make friends. Nothing beats the sensation of drifting on a dirt road. And in the middle of nowhere, if you’re stuck with a flat tire or caught axle-deep in the mud, your CAA or pharmacy fidelity card won’t be of any help. You’ll have to count on friendship and solidarity!