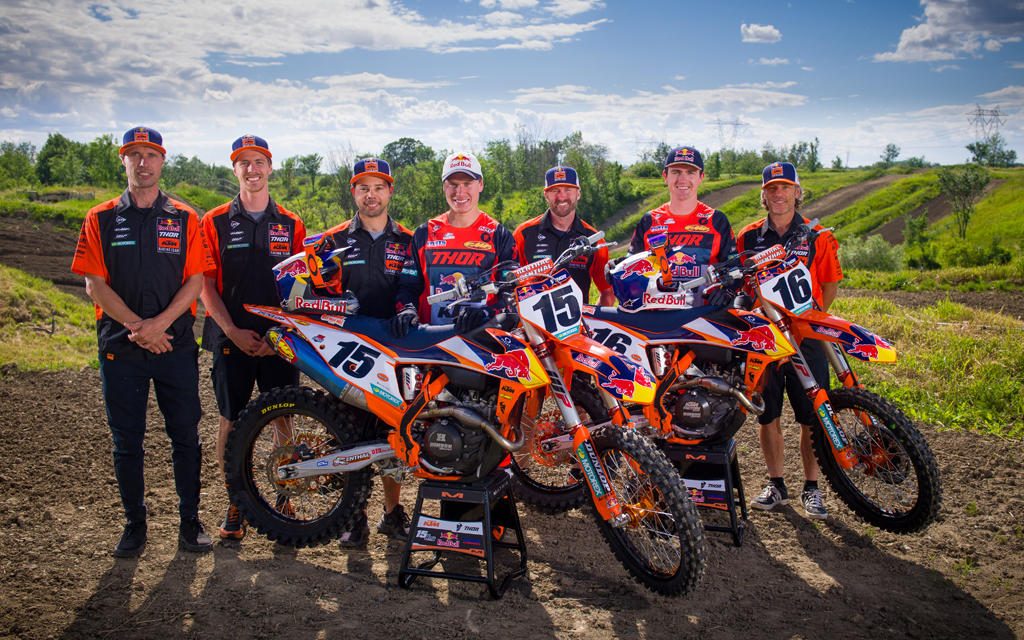 The KTM Canada Red Bull THOR Race Team is excited to announce its roster for the 2021 Triple Crown Series set to begin on Friday, July 2nd in Walton, Ontario. Headlining the team’s 450 class efforts for his fifth year is multi-time champion Cole Thompson, who will look to reclaim the title in 2021 with a healthy slate heading into the season. Joining him in the 450 class is last year’s 250 MX Tour Champion Jess Pettis, who is healthy and ready to take on his rookie season on the 450.

Lining up together for the first time in 2021, Thompson and Pettis are both Ready To Race into the summer with individual goals in mind. Thompson, the seasoned veteran in the 450 class, has already kicked off his racing schedule with the opening round of the U.S. Pro Motocross Championship last month and he is continuing to fine tune the KTM 450 SX-F FACTORY EDITION for the start of Canadian MX.

For Pettis, it’s been almost a year since he’s lined up for a gate drop due to an ongoing knee injury. With ample recovery time and great progression on the bike, Pettis has high hopes or a top spot in his first season aboard the KTM 450 SX-F FACTORY EDITION.

Cole Thompson, KTM Canada Red Bull THOR Race Team 450 Rider:“I’m beyond excited to start this upcoming season and I’m ready to fight for the championship. I have a great group of people around me and we’re ready to show how hard we’ve been working this year. I can’t wait to get the racing started on July 2nd for Round 1 of the Canadian MX Nationals.”

Jess Pettis, KTM Canada Red Bull THOR Race Team 450 Rider:“I’m really excited to move up to the 450 class and challenge those guys this season. I’ve raced previously in the 250 class and taking that next step up is going to be a challenge with tough competitors and I’m ready for it. I’m coming back from an ACL recovery, but I’ve done everything I can do with my rehab and getting my bike setup and working on my own program, so I don’t really know where I’m going to fit in but once we go racing, we’ll see where we stand and adjust from there. It’s exciting to have some new goals and new expectations and we’ll continue to work as hard as we can leading up to the first round.”

Jean-Sébastien Roy, KTM Canada Red Bull THOR Race Team Manager: “It’s been a long wait for all of us here. Our last National was almost 10 months back in September of 2020.  All our Racers and staff are excited to hit the road. Having both our top guys in the same class will bring a positive vibe and at the same time a sort of competition between the two teammates. We are lucky to have a great series put together by Jetwerx”

In addition, KTM Canada will work closely with up-and-coming Canadian talent including Jeremy Mckie & Jacob Piccolo in MX2, Ève Brodeur in WMX & MX2 and Sébastien Racine who will be racing intermediate with hopes of advancing into MX2.

To see the full race schedule for the 2021 Triple Crown Series, click here.