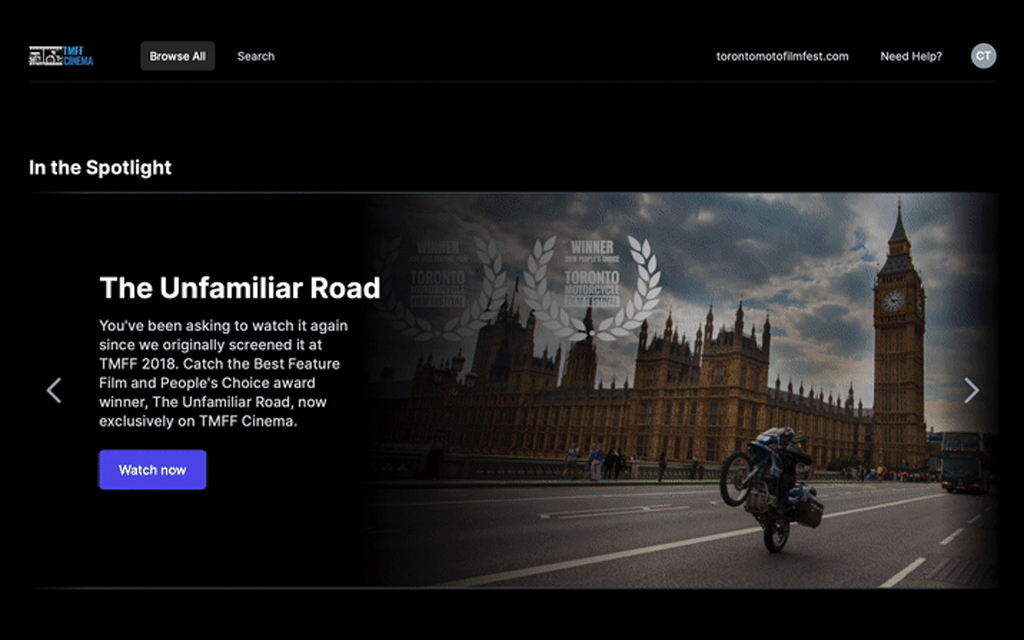 The Toronto Motorcycle Film Festival has launched TMFF Cinema, its video-on-demand service with a diverse selection of feature-length and short films about adventure, racing, and motorcycling culture, along with filmmaker Q&A discussions.

At launch, the collection includes award-winning and alumni films, along with several new releases. TMFF Cinema also includes exclusive content, films not available anywhere else such as two-time award winner The Unfamiliar Road and critically acclaimed Take None Give None, with additional films to be added regularly.

“We’re stoked about the ability to share our favourite films with the world. It will be everything people love about our annual motorcycle film festival, brought to your home, year-round, and available to a global audience,” says Festival Director Caius Tenche.

The five-year-old festival has been showing films online for about a year since COVID-19 made it impossible to have in-person screenings. Now, with TMFF Cinema, movie lovers can watch any film in the Festival’s catalogue at any time. Films are watchable on Apple TV, Roku, Amazon Fire TV or Firestick, Chromecast, Android TV, and Smart TV as well as from a PC, notebook, mobile device or tablet. Film rentals will start at CAD 6.99+tax for feature films and CAD 3.99+tax for shorts, with numerous films available to watch for free. With each rental, TMFF will split the profits with the filmmakers, supporting their craft and furthering the festival’s cultural mission.