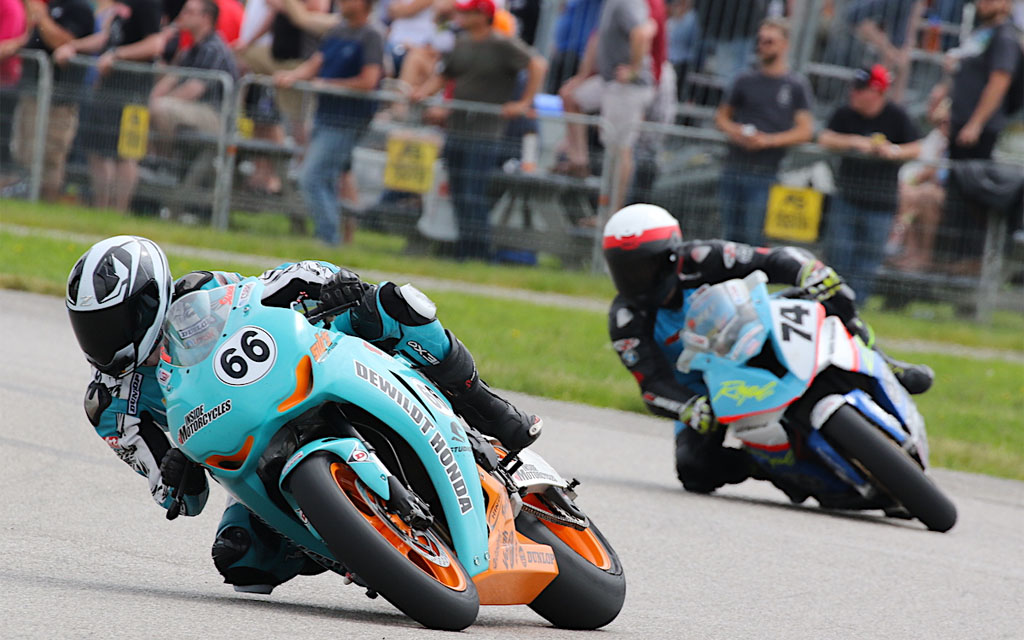 Canadian National Superbike Championship Organizers Professional Motorsports Productions of Toronto, ON, have confirmed the initial dates for the 2021 Championship tour for the National roadracing series.

After delays and restrictions caused by the ongoing COVID-19 pandemic and related restrictions during 2020, CSBK aim to provide a full schedule of events in 2021, and award National Championships in all five National series available to both Pro and Amateur status racers.

As well, events will be co-hosted by Pro 6 Cycle, organizers of Schools, Track Days and the recently announced inaugural Pro 6 G.P. Regional series based at Calabogie Motorsports Park south west of Ottawa, ON.  Pro 6’s participation in the delayed 2020 CSBK Series was crucial in the development of a new format given the issues surrounding the ongoing pandemic.

“2020 was a tough year for everyone in many ways, and we are grateful we could eventually put together a program with Pro 6 to stage events for the 40th anniversary of the Canadian Superbike Championship,” explains series founder Colin Fraser.

“With four Pro Superbike races as our 2020 focus and an eventual five episodes of coverage on TSN, everyone involved in CSBK has learned a lot about how to conduct the events, and we really appreciate the support of our competitors, fans, staff and sponsors.  We are well aware the health and safety guidelines might require changes to our plans on short notice next season.

“CSBK and Pro 6 are now working on all the elements of the 2021 National program and have based our plans on an expectation of no or extremely limited spectator participation in 2021, much the same as in 2020.  Everyone involved is optimistic about the return of our crowds, but we do not expect that to happen until mid-summer of 2021 at the earliest.

CSBK also plan to include a fifth event at either the top or the bottom of the 2021 Schedule and ask competitors to be prepared to race as early as late May 2021.  The plan for next summer’s race season is to have two Pro Superbike Feature races per event, with a total of ten races counting toward the 2021 National overall Championship and number one plate.

The 2021 series opener marks a return to the traditional Grand Bend date, unavailable last year in the earliest portion of the pandemic.  The second round at Calabogie will provide a full National event at the popular circuit for the first time since 2015, based on the success of the 2020 National opener.

The third round of 2021 marks a return to Atlantic Motorsport Park, an event cancelled for 2020 due to the “bubble” restrictions involving Canada’s east coast provinces.  The traditional summer event at “Shubie” will again be organized by Pro Cycle in Dartmouth, with support from local racing group the Society of the Atlantic Racing League.

The potential ten race Pro Superbike season would be the longest-ever in the 41-year history of the CSBK Championship, and would be popular with Feature class racers, since more events makes it easier for Championship points contenders to overcome a mechanical or competition issue.

CSBK will compete exclusively with spec Dunlop rubber in 2021, the eight-straight year of support from the famed motorcycle tire supplier.

In 2020, Jordan Szoke of Lynden, ON, swept all four Pro Superbike Feature events on the Canada General Warranty-backed works Kawasaki ZX-10R Ninja.  This success marked Szoke’s 14 overall Canadian Championship, and his fourth perfect season in the Superbike category.  41-year-old Szoke has confirmed his intent to seek another record-breaking title success in 2021.

Although CSBK did not run an official Championship for the middleweight Pro category in 2020, Sebastien Tremblay of Laval, QC won both the 2020 Liqui Moly Pro Sport Bike CSBK races aboard his Turcotte Performance Kawasaki ZX-6R Ninja.  New father Tremblay, the godfather of the Quebec-based racers, is a heavy favorite to take his first Pro Sport Bike crown in 2021.

CSBK had earlier confirmed that many special awards would not be offered in 2020, due to the last minute and abbreviated nature of last summer’s series.  This means prestigious opportunities, including the Brooklin Cycle Racing Pro Rookie of the Year, will be “rolled over” into 2021, with races who have made their Pro debut in 2020 and 2021 eligible to compete for the prize.